"Kellogg's on strrr-ike": 1,400 Workers walk off job to protect benefits 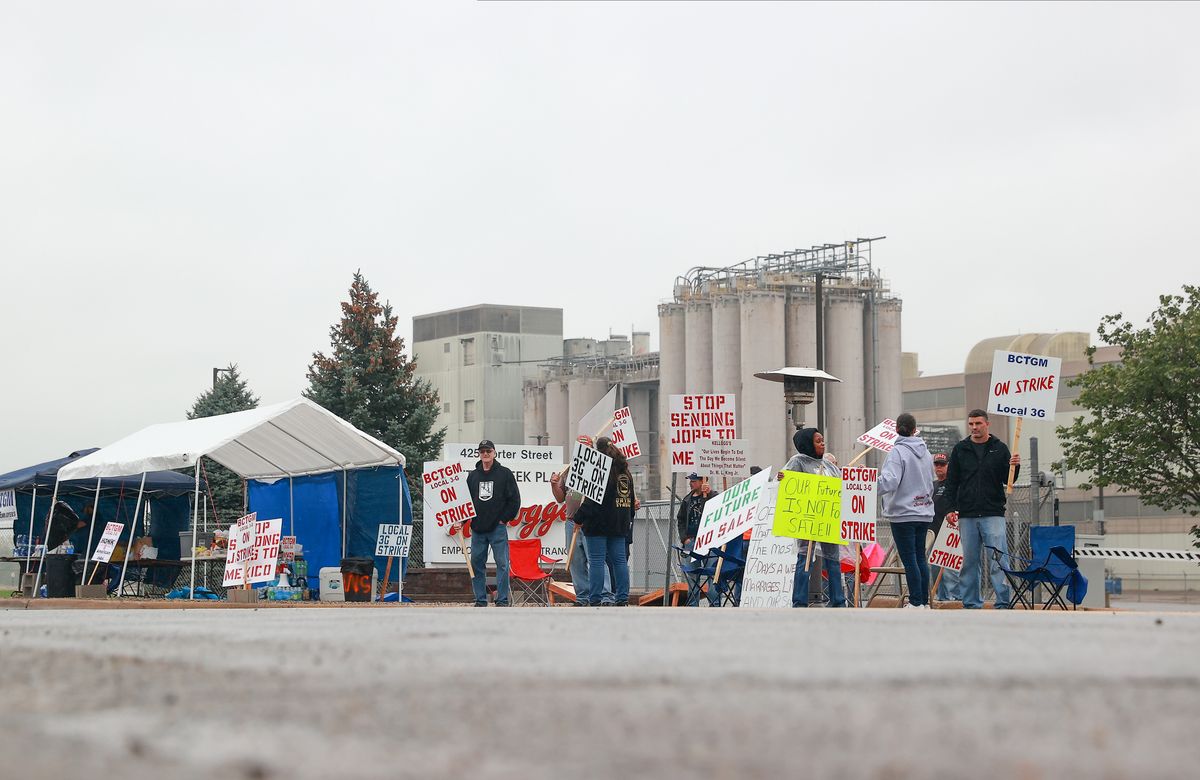 Roughly 1,400 workers who make Corn Flakes, Froot Loops, Frosted Flakes, Raisin Bran, and Rice Krispies walked off the job on Tuesday to demand a fair contract, bringing all of the Kellogg Company's U.S. cereal factories to a halt in one of the nation's latest strikes.

Anthony Shelton, president of the Bakery, Confectionery, Tobacco Workers, and Grain Millers International Union (BCTGM), on Tuesday expressed the union's "unwavering solidarity with our courageous brothers and sisters who are on strike against the Kellogg Company" in four cities: Local 3G in Battle Creek, Michigan, where the company is headquartered; Local 50G in Omaha, Nebraska; Local 374G in Lancaster, Pennsylvania; and Local 252G in Memphis, Tennessee.

"For more than a year throughout the Covid-19 pandemic, Kellogg workers around the country have been working long, hard hours, day in and day out, to produce Kellogg ready-to-eat cereals for American families," Shelton said in a statement.

Daniel Osborn, president of Local 50G in Omaha, told the Associated Press that as the coronavirus knocked people out of work, remaining employees were often forced to put in 12-hour shifts, seven days a week.

"Kellogg's response to these loyal, hardworking employees," Shelton said, "has been to demand these workers give up quality healthcare, retirement benefits, and holiday and vacation pay."

According to Shelton, "The company continues to threaten to send additional jobs to Mexico if workers do not accept outrageous proposals that take away protections that workers have had for decades."

Last month, the Kellogg Company announced its plan to slash more than 200 jobs at its Battle Creek plant over the next two years.

Kellogg is also trying to institute a two-tier employment system in which "new hires will make less money, have higher health insurance payments, and will not earn a pension," according to the union, which characterized the company's proposal as a divide-and-conquer strategy that asks "the current workforce to sell out the next generation of Kellogg workers."

"Kellogg is making these demands," Shelton continued, "as they rake in record profits, without regard for the well-being of the hardworking men and women who make the products that have created the company's massive profits."

Shelton added that BCTGM is "proud of our Kellogg members for taking a strong stand against this company's greed and we will support them for as long as it takes to force Kellogg to negotiate a fair contract that rewards them for their hard work and dedication and protects the future of all Kellogg workers."

Citing Osborn, AP reported that the Kellogg Company, which said it is "implementing contingency plans," is expected to "try to bring non-union workers into the plants at some point this week to try to resume operations and maintain the supply of its products."

While BCTGM has not officially called for a boycott, a union spokesperson reportedly told HuffPost labor reporter Dave Jamieson that "supporters and consumers could certainly support the Kellogg workers and their fight for a fair contract by choosing NOT to buy Kellogg cereals while the strike is ongoing."

On Twitter, the union shared a link where supporters can contribute to strike funds.

The strike against Kellogg started just one day after nearly 99% of the International Alliance of Theatrical Stage Employees (IATSE), a 60,000-member union of film and television production crews, voted to go on strike if studios don't agree to a fair deal for the industry's lowest-paid workers.

Both actions could be early signs of a potential surge in worker organizing, as AFL-CIO president Liz Shuler noted.

The Guardian reported last week that "tens of thousands of workers around the U.S. could go on strike in the coming weeks in what would be the largest wave of labor unrest since a series of teacher strikes in 2018 and 2019, which won major victories and gave the American labor movement a significant boost."

Kellogg's workers aren't the first BCTGM members to strike during the pandemic.

In July, aound 600 workers at a Frito-Lay plant in Topeka, Kansas walked off the job to fight against forced overtime hours, low pay, and other conditions that BCTGM Local 218 members deemed unacceptable.

In August, hundreds of BCTGM members working at Nabisco plants in multiple states went on strike to demand better working conditions and to protest the foreign outsourcing plans of Mondelez International, the snack maker's parent company.