The best heavy cream substitutes for cooking and baking

What are the best heavy cream substitutes? We gathered the dairy and vegan options, like half-and-half and coconut 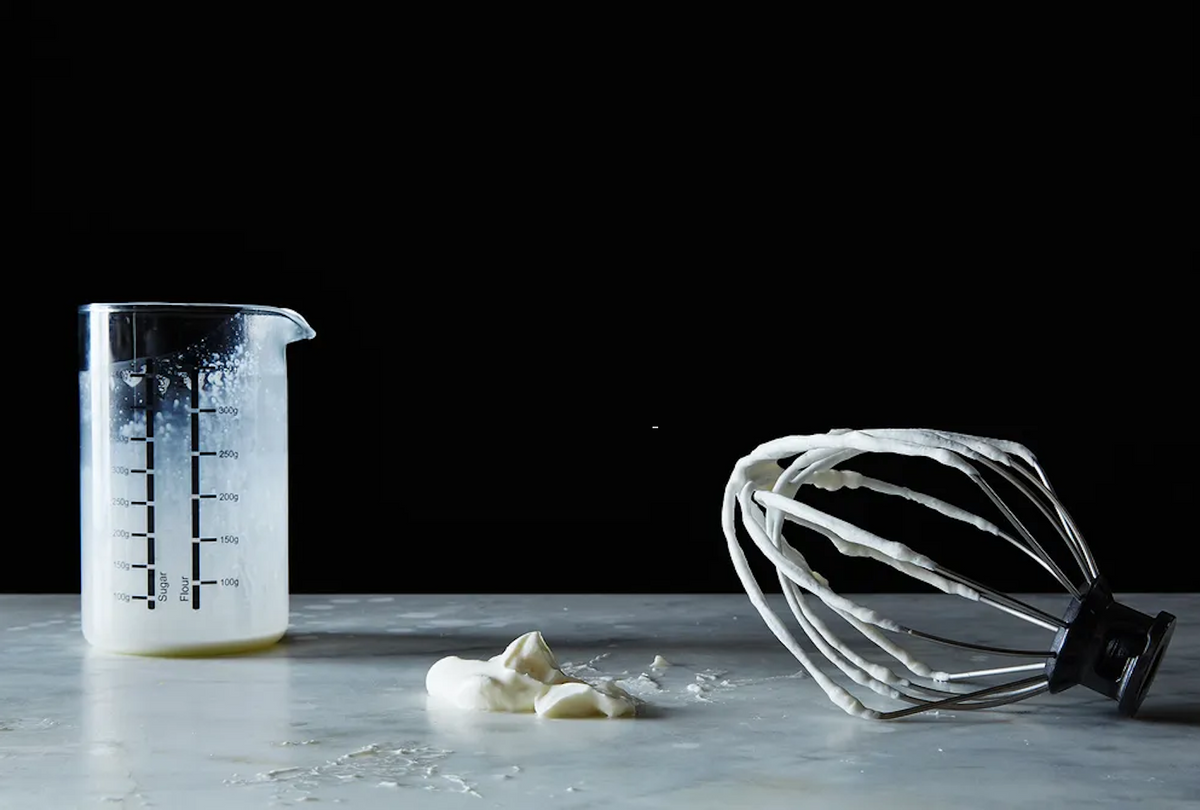 If you asked me what I dream about at night, the answer would be heavy cream in all its silky, creamy glory. Heavy cream is responsible for chart-topping recipes like Our Best Vanilla Ice Cream, Stovetop Mac and Cheese with Garlic Powder and White Pepper, Scalloped Potatoes with Caramelized Onions, and Warm Eggnog. If creamy comfort food is my dream, then running out of heavy cream is my nightmare. Few things hurt my soul more than pouring a generous amount of heavy cream into freshly mashed spuds only to find that there's a drop or two left of the cream. What's a girl to do? Cry. Panic. Call my mom. Or maybe do three minutes of breathwork and then open my refrigerator or pantry again to search for a substitute for heavy cream.

Alternatives for heavy cream may be another kind of dairy product or they may be vegan. There are thousands of recipes on our site that call for heavy cream, like penne alla vodka and creamed greens and frozen honey mousse. But do you actually need the cream? Can you replace it with milk? Or coconut milk? Or something else entirely? Today, we're going to answer those questions and more. Ahead, find the best heavy cream substitutes that work every time . . . no tears necessary (but I'm still going to call my mom).

But first, an ask-me-anything heavy cream lightning round! Let's go:

Cream comes by way of milk. As food science authority Harold McGee explains it, "Cream is a special portion of milk that is greatly enriched with fat." So, if you find yourself with a bucket of straight-from-the-cow milk, and you let it hang out for a while, the fat will rise to the top, yielding a layer of cream.

According to the U.S. Food and Drug Administration (FDA), heavy cream should not contain less than 36% milkfat. It is either pasteurized or ultra-pasteurized, and may be homogenized. So what about heavy cream vs. heavy whipping cream — where does the latter fit into all of this? Heavy whipping cream is actually the exact same product as heavy cream (meaning that it also must contain at least 36% milkfat), but brands may call it different names. You might also see it under the name "whipping cream" and yep, that's the same thing, too.

Can I substitute light cream for heavy cream?

Depends on the recipe. Light cream generally has a fat content of 20%, while heavy cream is at least 36%. If you need the cream to whip, light cream won't cut it (there isn't enough fat to form a foam — try to say that five times fast). But if the recipe is more forgiving (like a pureed soup or mashed potatoes), swapping in light cream shouldn't cause any major issues.

Can I make whipped cream with half-and-half?

Sorry, no. Half-and-half's fat content hovers around 12%, which is great for pouring into coffee and over fresh fruit, but isn't fatty enough for whipping.

Can I substitute whipping cream for heavy cream?

Can I substitute evaporated milk for heavy cream?

Again, depends on the recipe. Evaporated milk is pressure-cooked until it loses roughly half of its water content; the beige-hued result has a high concentration of lactose and protein. If you're making whipped cream or a baked good (say, cream scones or apple butter pie), stick to what's called for. But, if you're working with a soup or saucy-something, you can do a 1:1 substitution of evaporated milk in place of heavy cream.

These are some of the most common cream replacements. We'll get to know each ingredient, then learn how to put them toward specific recipes in the section below.

Half cream, half milk, this dairy hovers between 10–12% fat. It can't be whipped and shouldn't be swapped into baking recipes, but is great for enriching soups and mashed or creamed vegetables.

Heavier than half-and-half, but lighter than heavy cream, with an 18–30% fat content. Still too lean to whip, but good for enriching soups and mashed vegetables, and can be used for sauces.

With about 3.5% fat, this is the creamiest milk around, but still significantly leaner than heavy cream. Use for mashed vegetables or other forgiving cooking preparations. Trying to reduce milk like cream would cause curdling (though sometimes this is on purpose).

This canned product has had 60% of its water content removed. To use as a heavy cream substitute, look for the whole-milk variety, which contains at least 7.9% fat. It works very well in sauces, but has a slightly cooked, caramelized flavor.

Rich in fat, both of these products are a great vegan substitute for heavy cream. Try in sauces and soups; the cream can be whipped. However, it doesn't quite have the body that heavy cream (or heavy whipping cream) has, so it won't ever form stiff peaks like whipped cream does. Avoid light varieties and don't confuse with cream of coconut, which is sweetened.

Another great vegan substitute, with a much milder flavor than coconut. You can make your own cashew cream by soaking nuts, then blending them until smooth. If you're buying store-bought, make sure to avoid sweetened varieties.

Yep. This sorta-substitute, made by roasting and puréeing onions, is so out there, it's Genius. Don't even think about using it for sweets, but "you can swap it in for cream in your risotto, add to pasta with fresh herbs for a healthier, brighter, but still decadent-tasting dish, whip it into your mashed potatoes, or use it in a quiche to lighten up the base," according to its creator chef Grant Lee Crilly.

How to substitute heavy cream in recipes

Now, onto some specific recipes. Below are six heavy cream–loving dishes. We'll break down whether or not you can substitute, and which substitutes are your best bet.

Can I substitute the heavy cream in mashed potatoes?

Short answer: Yes.
Recommended substitutes: Whole milk, evaporated milk, coconut milk, onion cream.
Caveats: Dairy is a free-for-all in mashed potato recipes. If you read enough of them, you'll come across heavy cream, milk, cream cheese, goat cheese, sour cream, butter, and often the freedom to pick your favorite (like when a recipe says "1/2 cup whole milk or half-and-half"). So, there's a lot of flexibility here. Just keep in mind that if you opt for a vegan option, like coconut milk, you'll notice its flavor.

Can I substitute the heavy cream in soup?

Can I substitute the heavy cream in alfredo sauce?

Short answer: Technically, Alfredo sauce isn't supposed to have heavy cream in it — in traditional versions, the creaminess actually comes from the starchy pasta water, butter, and cheese — but, yes, a lot of contemporary Alfredo recipes do contain cream, and yes, you can substitute it.
Recommended substitutes: Evaporated milk. Or, pureed cauliflower!
Caveats: Because of the way it's boiled down, evaporated milk has an almost sweet, caramelly flavor. To make sure this isn't too noticeable, don't skimp on the Parm.

Can I substitute the heavy cream in quiche?

Short answer: Yes.
Recommended substitutes: Half-and-half or whole milk.
Caveats: Some quiche recipes call for all cream, some call for a mixture of cream and whole milk (with a popular ratio of 1:1), and some call for all milk. You can swap out the cream for half-and-half or milk, but it will result in a less flavorful, less silky custard. Don't use lowfat or nonfat milk, which would give the custard a blander flavor and spongier texture, with a higher risk of curdling.

Can I substitute the heavy cream in whipped cream?

Short answer: Yes.
Recommended substitutes: Coconut cream.
Caveats: While you can't swap out heavy cream for a lower-fat dairy, like half-and-half or milk (it won't whip up), you can turn to a dairy alternative: coconut cream. You can either buy this straight or refrigerate a can of coconut milk for at least 12 hours, then scoop up the cream layer on the top.

Can I substitute the heavy cream in ice cream?

Short answer: Sort of.
Recommended substitutes: Half-and-half. Or, go vegan.
Caveats: Many ice cream recipes call for a 2:1 ratio of cream to milk. You can replace the cream portion with half-and-half, or you can replace both the cream and milk with half-and-half. Just remember that the less butterfat your ice cream has, the icier and harder it will turn out (aka not creamy). To compensate for this, you can swap out some of the granulated sugar for a liquid sweetener, like corn syrup or honey, which will encourage a creamier result. On the opposite side of the spectrum, you can skip the dairy altogether and make a vegan ice cream with coconut milk or cashew cream instead (here is our full guide on how to make dairy-free ice cream).

These cream-filled recipe are the, ahem, cream of the crop

(But you can still use a swap!)

These biscuits call on heavy cream instead of the classic buttermilk for a simpler mixing process, and a rich and tender final product. If you don't have heavy cream on hand, feel free to use half-and-half or milk, or better yet, just go back to basics and use buttermilk for a tangier biscuit.

By heavily seasoning the cooking water for the potatoes with salt, garlic, peppercorns, and aromatics, you can skip the step of seasoning after they're mashed. These potatoes emerge from the water brimming with flavor and perfectly cooked, meaning you can mix them less, which lowers the risk of over-working your mashed potatoes into a gluey, starchy mess. Just add a little butter, cream, and plate up your potato-y perfection.

We love this recipe from editor Rebecca Firkser for many reasons. As Firkser writes, this vodka sauce gets the bulk of its creaminess from "a mixture of grated Parm and pasta water, both of which are more salty and nuanced than cream." Music to any lactose-intolerant ears! It does still call for some cream, which can be subbed for a little half-and-half or whole milk, without compromising the whole dish (as is typical of cream-less attempts at vodka sauce).

This mushroom soup delivers on the promise of creamy, with an ultra-comforting, bisque-like consistency. A little cream goes a long way here, as does a touch of cognac. For a more sophisticated depth of flavor, use a mix of mushrooms: cremini, shitake, button, hen of the woods, oyster, and chanterelle will all do nicely here.

Leave it to Resident Baking BFF Erin Jeanne McDowell (of Bake it Up a Notch) to come up with a dessert this fun to look at — and eat! Vanilla-, strawberry-, and chocolate-flavored mousse get layered for a whimsical Neapolitan effect, but you can easily just make one (or two!) flavors of mousse to tailor to your desired effort-level and ingredient-availability.