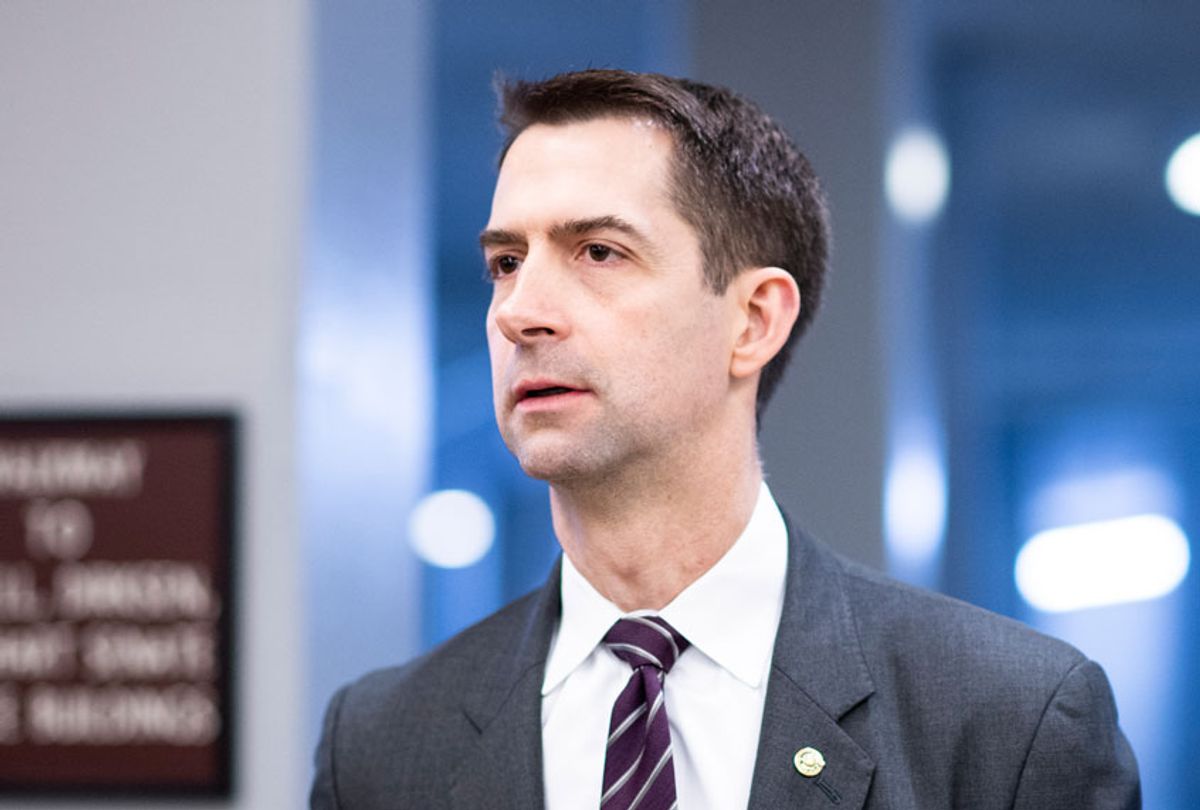 According to an excerpt from a new book by political journalist David Drucker, Senate Minority Leader Mitch McConnell (R-KY) and Sen. Tom Cotton (R-AR) plotted behind Trump's back as the former president attempted to rally GOP senators to his side and stop the certification of the 2020 presidential election.

As Drucker writes in his book, "In Trump's Shadow: The Battle for 2024 and the Future of the GOP," that Arkansas republican, with an eye on the 2024 GOP presidential, nomination saw the writing on the wall that Trump was about to plunge the country into chaos after his loss to Joe Biden, and worked with McConnell on a plan to provide cover to GOP Senate colleagues to refuse Trump's entreaties that they fight on the Senate floor to overturn the election results.

Writing, "From the inception of Trump the politician, Cotton exhibited an understanding of the future president's psychological peculiarities, and an intuitive grasp of the fervor he inspired among his MAGA fan base. For Trump, all politics was, and still is, intensely personal," Drucker added that Cotton knew he had to stay on Trump's good side if he was to be effective while at the same time being wary of Trump's instability.

As Drucker explains, Cotton and McConnell were both well aware that Trump planned to overturn the results of the Electoral college.

"To say that Cotton was not swayed by Trump's theory of the case is an understatement. But as is his habit, he wanted to be thorough," Drucker reported "In early December, Cotton directed legislative aides on his Senate staff to research the matter extensively and prepare an exhaustive memorandum. As the senator suspected, it made plain that the Constitution had not, in fact, built in a secret back door for Congress or the vice president to invalidate presidential election results. In mid-December, after the states had certiﬁed their results and the Electoral College had voted, Cotton read in McConnell. Together, they plotted to countermand Trump's bid to overturn the election and neutralize interest in objecting to Biden's victory that was developing in some quarters of the Republican conference."

With that in mind Cotton planned to publish an op-ed in an Arkansas paper on the morning of Jan 6th, dismantling Trump's case and putting it all to rest -- but that plan was blown up when Sen. Josh Hawley (R-MO) made a big show in late December stating he was going to fight to block certification.

Writing that "Cotton's strategy was derailed," Drucker reports "After some discussion, McConnell urged Cotton to speed up his timeline for announcing his opposition. The majority leader had been aggressively whipping the issue. But he believed that Cotton, with his conservative bona ﬁdes and reputation as a Trump loyalist, might be more effective at talking teetering Senate Republicans off the ledge by providing cover to those who privately wanted to stand behind the certiﬁcation of Biden's victory but feared the consequences back home."

"Three days later, the violent siege of the U.S. Capitol, perpetrated by Trump supporters, ended up changing a few minds. Rather than a dozen Republican objectors, just six voted to throw out Biden's win in Arizona, with the same six, plus a seventh, voting to excise his victory in Pennsylvania," the author explained. "While Republicans in the House were unmoved by the insurrection and continued with attempts to force a debate over the results, Republicans in the Senate declined to join them in that effort, save for Hawley. He insisted on following through with plans to object to the tally in Pennsylvania, even after the Capitol was ransacked and members of Congress, and Pence, were sent ﬂeeing for their lives."

According to the author, "Two senior members of McConnell's leadership team, Thune and Senator John Barrasso of Wyoming, emphasized that the whole thing would have gotten completely out of hand if not for the stand taken by Cotton," with Thune stating, "Tom played a very important role, especially as people were starting to waver. He took a risk coming out Sunday rather than waiting quietly until Wednesday; he knew it wouldn't be popular with the base."

You can read more here at Vanity Fair.