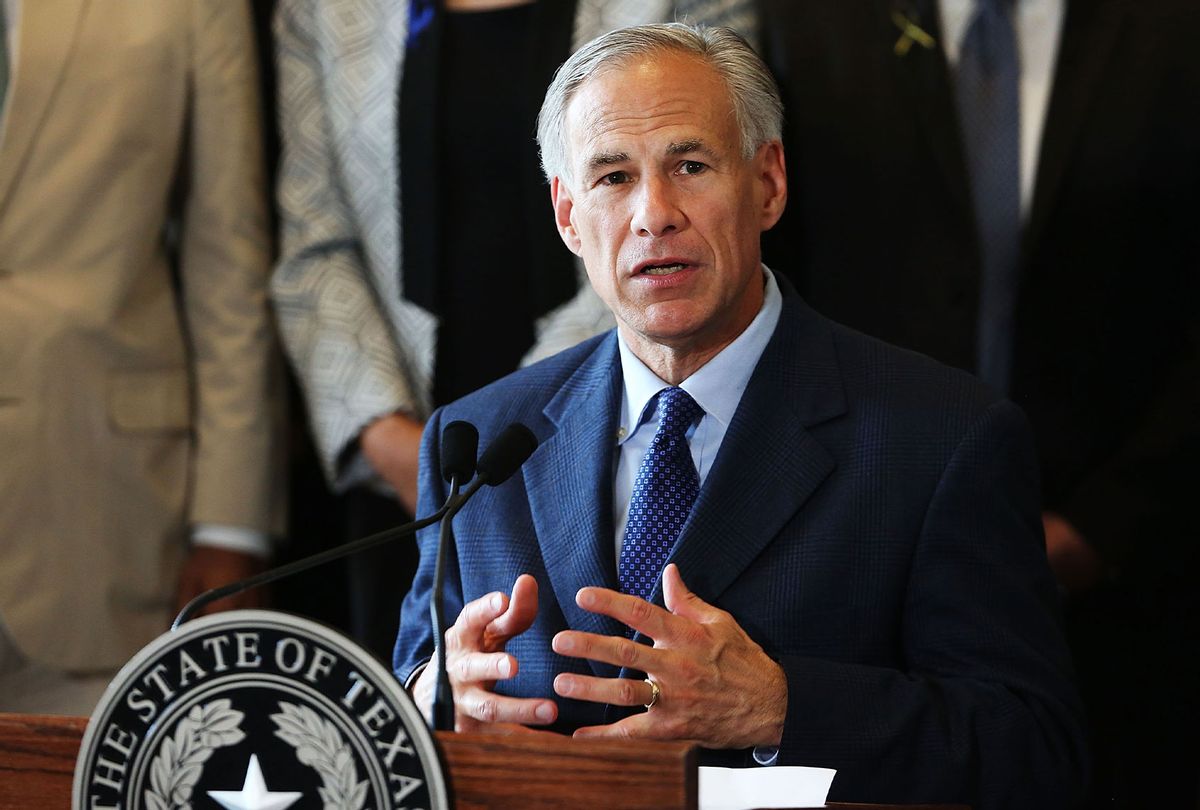 A Texas state agency removed a website that listed a suicide hotline and resources for LGBTQ youth after a far-right Republican who is challenging Gov. Greg Abbott accused his administration of spreading "transgender ideology."

Don Huffines, a former state senator who plans to run against Abbott in the 2022 Republican primary, posted a video to Twitter in August criticizing the governor over a webpage for the Texas Youth Connection, a division of the Texas Department of Family and Protective Services. The page provided a number for a suicide prevention hotline and other resources to help LGBTQ kids under a section labeled "Gender Identity and Sexual Orientation."

"They are promoting transgender sexual policies to Texas youth," he claimed. "These are not Texas values, these are not Republican values," he added. "But these are obviously Greg Abbott's values."

Just hours after the video was posted, the Department of Family and Protective Services removed the page and later took down the entire website for the Texas Youth Connection, according to the Houston Chronicle.

"The Texas Youth Connection website has been temporarily disabled for a comprehensive review of its content," the page now says. "This is being done to ensure that its information, resources, and referrals are current."

Emails obtained by the Chronicle show that department employees scrambled to take down the page in direct response to Huffines' criticism.

Crimmins forwarded the email to Darrell Azar, the agency's web director, writing, "please note we may need to take that page down, or somehow revise content."

Azar explained that the page was up to primarily support teenagers who are placed in foster care by the state and has included "content related to LGBTQ for as long as I can remember."

The webpage was taken down shortly after that exchange. Crimmins told the Chronicle that the agency's review is "still ongoing."

Huffines took credit for the removal.

"We aren't surprised that state employees who are loyal to Greg Abbott had to scramble after we called their perverse actions out," he told the Chronicle. "I promised Texans I would get rid of that website and I kept that promise."

Ricardo Martinez, who heads the LGBTQ advocacy group Equality Texas, told the outlet that the move put young people in danger, noting that LGBTQ youth in foster care are three times more likely to report attempting suicide than those not in the system.

"The state is responsible for these kids' lives, yet it intentionally removed a way for them to find help when they need it the most," he said. "This action is unconscionable, and it reminds us that political aspirations are part of every attack on LGBTQ+ kids in Texas, including the fabricated debates and dozens of anti-transgender bills targeting them this year. These precious kids deserve so much better than the way this state is treating them."

All 13 Democratic state senators sent a letter to Abbott and other state officials on Tuesday calling for them to restore the website.

"As leaders of our state, we must do more to protect our most vulnerable populations, including ensuring life-saving resources such as crisis lines and legal help are easy to access," the letter said.

Huffines previously pressed Abbott to support a bill to ban medication and procedures "for the purpose of gender transitioning or gender reassignment." The bill was voted down and Abbott did not call for the legislature to take it up again, but in August he asked the Department for Family and Protective Services to determine whether gender reassignment surgery "constitutes child abuse." LGBTQ advocates accused Abbott of targeting a "healthcare practice that doesn't exist, in his continued attempt to incite fear around vulnerable transgender children," arguing that surgery is rarely performed on minors.

Abbott last month also pushed the legislature to pass a bill restricting transgender children from playing on school sports teams that match their gender identity, after being pressured on the issue by from Lt. Gov. Dan Patrick, a far-right Republican.

The state legislature has considered more than 50 bills this year targeting LGBTQ youth, according to Equality Texas.

"Texas Republicans are so scared of their right wing primary opponents that even the supposedly 'reasonable' ones become them anyways," state Rep. Erin Zwiener said on Twitter.

"Greg Abbott is so scared of losing his primary, he's sabotaging an LGBTQ youth suicide prevention hotline to kowtow his extremist base," tweeted former HUD Secretary Julian Castro, who is also the former mayor of San Antonio. "Just disgusting."