How this baker turned her guest room into a bakery 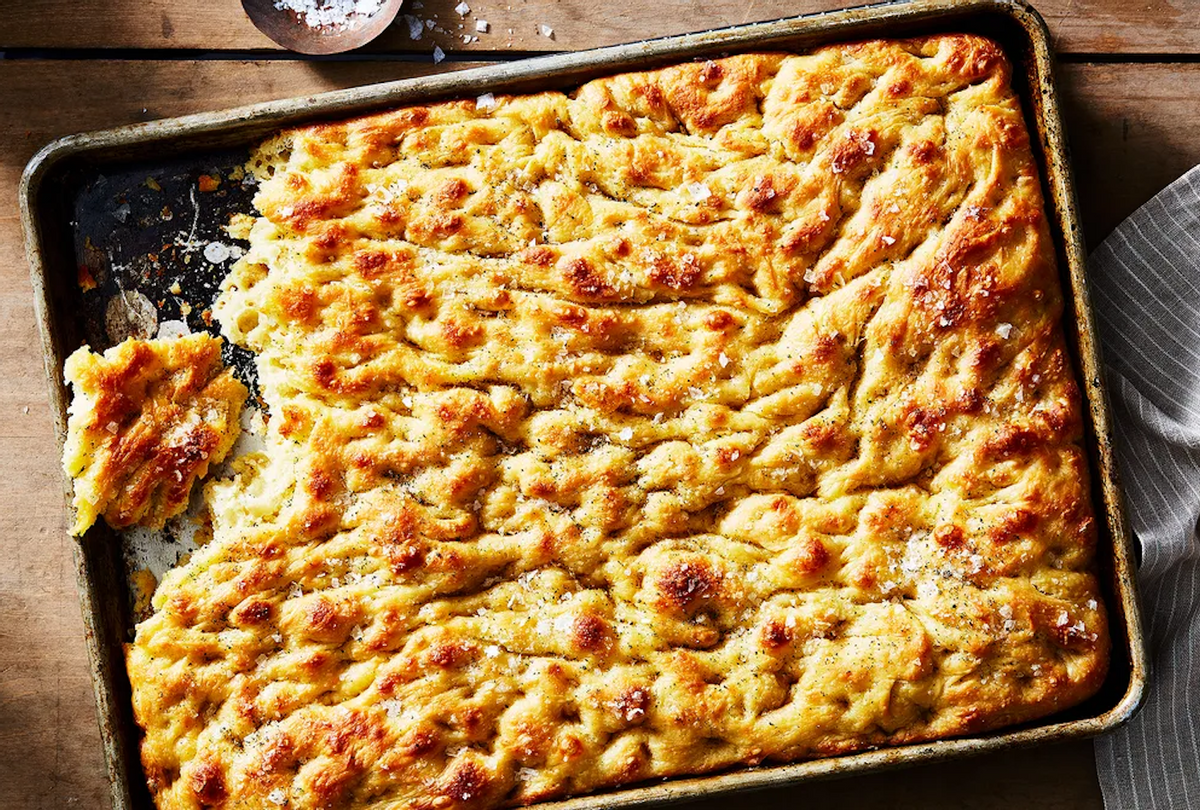 If you walk down Lafayette Avenue between Grand and Classon in Clinton Hill, Brooklyn, you might catch a glimpse of a blonde woman popping her head out of a second-floor window as she lowers a pulley basket containing a paper-wrapped parcel down to a neighbor. Her name is Carla Finley, and the package is a sourdough boule (or a sheet of grape-and-za'atar focaccia, or maybe three toasted pecan cinnamon rolls). Look closer, and you'll see a rack stacked with warm bread in the window. Shout hello and Finley'll drop you a card for Apt. 2 Bread, the bakery she runs out of her apartment.

Finely launched Apt. 2 Bread in March 2020, an anxious month for us all. She had been furloughed from her baking job at the Italian-Mediterranean restaurant Il Buco, which she had recently started after a year spent working at the Brooklyn sourdough mecca She Wolf. Apt. 2 Bread was a way for her to stay sane by continuing to use her hands, while also feeding those locked down in her neighborhood, the best way she knew how — with freshly baked bread.

It's a similar story to many of the restaurant workers who found themselves suddenly unemployed at the onset of the pandemic. Personal pop-ups became an outlet for chefs to exercise their creativity and skills while simultaneously giving back to their communities — and putting some cash in their pockets. With a simple scroll through Instagram, you could find Korean dosirak, Caribbean roti, pints of ice cream, and more, all made from scratch by a talented cast of cooks. It was a dark period, but a glorious time to eat, so long as you were plugged in to the pop-up scene.

Today, many of those pandemic-born pop-ups have ceased to exist. Some transformed into brick-and-mortar businesses. Other chefs simply returned to work in restaurant kitchens. "The thought of going back to a restaurant did cross my mind last fall, when COVID had let up in a small way," Finely remembers. "And then pretty much right away, I realized I just didn't have an interest in the idea of relying on another person for my livelihood during a time of panic. It didn't sit right." But in order to make Apt. 2 Bread work financially, she had to grow. Demand continued to rise for weekly subscriptions of her sourdough boules and especially for slabs of her fluffy focaccia studded with Castelvetrano olives. "I love the subscriptions, because it typically means that they are people who live nearby, and I really just want to be the neighborhood bread lady," Finley says.

She was on the waitlist for a Rofco stone oven from Belgium, which is known for its compact size and ability to produce professional-quality bread — perfect for expanding a home bakery — but the arrival date kept getting pushed due to pandemic-induced demand. Finley considered canceling the order and moving her production to a commissary kitchen, or to a neighborhood restaurant that offered up their pizza oven, but nothing panned out. So she doubled down.

"I was like, 'I'm not going to cancel it, I'm not going to cancel it,'" Finley recounts, "'I'm just gonna give it a go.' I knew I had the support from neighbors and beyond, from people who've followed my journey." She also, luckily, had an extra room in her apartment. Her roommate had moved out, and since then, she and her partner had been using it for storage or as a crashing pad for friends. The idea to expand Apt. 2 Bread into a fully functioning bakery at home, in the same apartment it has always operated from, was cemented after a fortunate call with her landlord. "I just laid it all out, told her I'd have to get electrical work done, and explained that this was how I was making money during the pandemic. And she approved," Finley says. (She's also certified as a home processor under the Department of Agriculture and Markets.)

As she waited for her oven to finally arrive, she had that electrical work done. She raised some funds from her community to buy an industrial mixer. And she designed her miniature home bakery, mapping out dimensions with tape on the floor before deciding which baker's bench to buy, installing cooling racks overhead, and stacking shelves with 10-pound bags of King Arthur bread flour and 22-quart Cambro tubs of locally grown and milled spelt and rye.

When the Rofco arrived in mid-July, it was off to the races with recipe testing. With her new oven, Finley could quadruple her output. She added another focaccia flavor (the grape-za'atar) and a whole-grain sourdough batard, tweaked her cinnamon buns to include earthy black walnuts (which she's since swapped for pecans, as a nod to her Texas roots), and developed her sourdough shokupan and potato pan loaves, baking them off in the big rectangular oven while peeking out at her bird's-eye view of Lafayette Avenue. Unlike her apartment's kitchen, where she used to do all of her baking, Finley's new bakery — which she officially reopened for business in August — is street-facing.

Finley is the first to admit that lowering freshly baked goods from her window down to customers on the sidewalk is "just cool." And yet the main reason that she installed a pulley system was to eliminate all of the trips she had to take up and down her building's stairs to hand-deliver loaves. That's not to say she won't still stop and have a chat. "I think the reason people come is, yes, they like the bread. But also, it's the experience. It's nice to say hello and ask about the weather," she says.

Apt. 2 Bread functions through pre-orders, as it's nearly impossible for Finley to take orders in real-time as a one-woman show operating out of a two-bedroom apartment. Still, one of her signature blistered focaccias, slicked in grassy olive oil and sprinkled with flaky sea salt, could be yours with a week's notice. She hopes to figure out a way to sell bread to walk-up customers in the future, but for now, it all somehow, miraculously, works. It's a particular magic marriage: homemade goods baked professionally. "I think for my products specifically, just because they're made by me in my home, they're a little nicer," she says. As you rip into your warm treat and take that first chewy bite walking down Lafayette, you'll see what she means.