Afghan women face a crisis, and the Taliban's record is appalling. But freezing foreign aid is not the answer 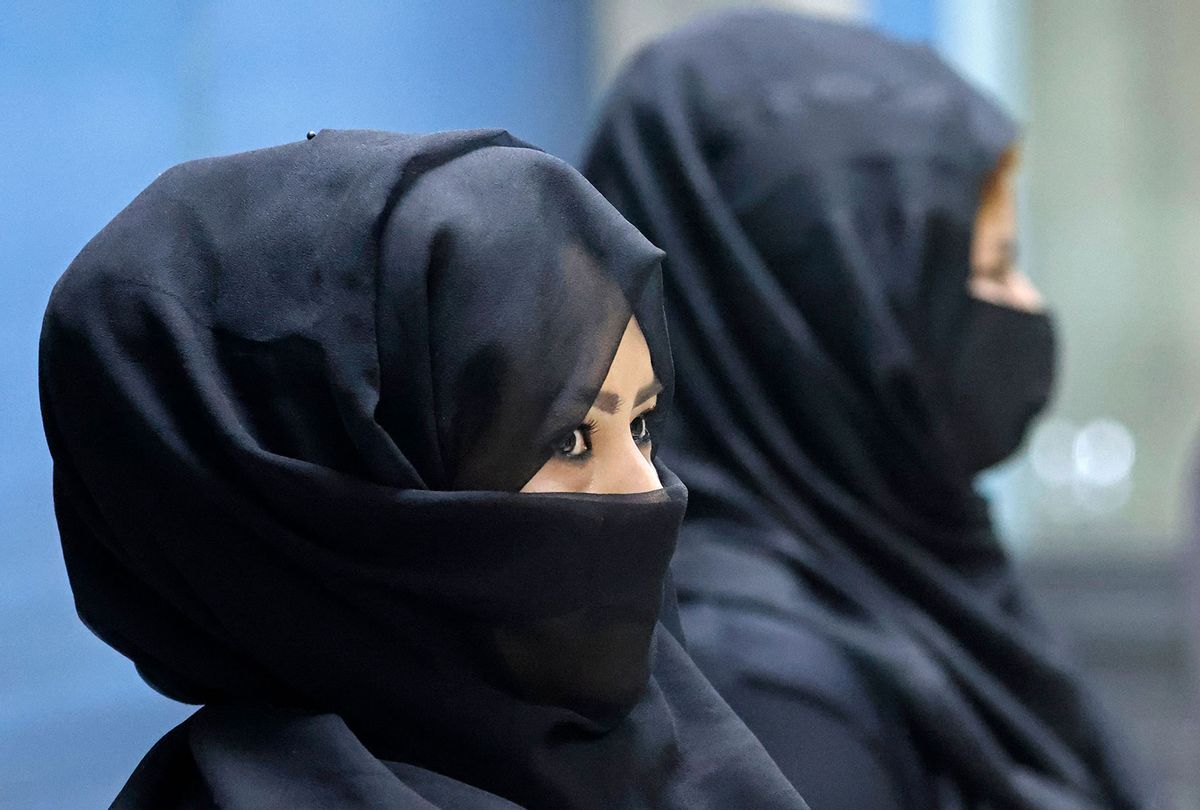 Afghan women airport workers are pictured at a security checkpoint of the airport in Kabul on September 12, 2021 (KARIM SAHIB/AFP via Getty Images)
--

This article originally appeared in Jacobin Magazine. Used by permission.

Since the Taliban took control of Kabul and the central government on Aug. 15, efforts to support Afghan women have become extremely challenging. According to some prominent U.S. feminists with strong ties to Afghan women, the Taliban "has no legitimacy beyond the brutal force it commands," and governments, the UN and regional actors should not recognize or work with it. For some, this means isolating the Taliban by continuing to freeze Afghan funds held overseas and suspending any assistance that is coordinated with a government agency. But does that position really help Afghan women?

There's little question that gains made by Afghan women over the past 20 years, particularly urban women, have been rolled back — at least temporarily. Since coming to power, the Taliban have said girls would be allowed to go to school, but in some parts of the country, girls are being kept out of grades 7 through 12. And while female students have continued to attend private universities, most women enrolled in public universities have not been attending classes due to fear, canceled classes or Taliban restrictions. Even though Taliban spokesmen insist that women can continue to work, there are also frequent reports of Taliban militants ordering women to leave their workplaces.

While we should all be outraged about the abuses and deterioration of rights that Afghan women are experiencing, the Taliban aren't the only cause of women's distress right now. The economy and public services are screeching to a halt because the international community has pulled the plug on funding. Afghanistan is a country that has relied on outside donors to fund its vital services for most of its modern existence. When the U.S. pulled out of Afghanistan, it froze $9.5 billion of the Afghan Central Bank's assets and pushed the International Monetary Fund to block Afghanistan's access to more than $450 million earmarked for COVID-19 relief. Adding fuel to the fire, the World Bank suspended financing to the Afghan health care system through its Afghanistan Reconstruction Trust Fund. Given that foreign aid to Afghanistan had previously been about $8.5 billion a year — nearly half the country's gross domestic product — the impact of freezing these funds is catastrophic for women and their families.

There are about 220,000 teachers in Afghanistan, and UNICEF estimates that about a third of them are women. Since June, most teachers haven't been paid their salaries. On Oct. 6, the 45,000-member Afghan Teachers Association put out an urgent appeal calling attention to their dire situation. "The Ministry of Education has very few resources, and it is hard to ask our teachers to keep working without salaries. Many of them are the sole breadwinners in their families, and they are really struggling. It will be difficult to keep the schools open if we have no funds."

And it isn't just Afghan teachers. Most of the nation's health care workers have also been working without salaries. Right now, the country's health care system is on the brink of collapse. WHO Director-General Tedros Adhanom Ghebreyesus has stated that due to the suspension of funding, Afghan medical facilities have been unable to buy supplies and pay salaries. According to UNDP's Asia-Pacific Director Kanni Wignaraja, only about 17 percent of some 2,200 health facilities in Afghanistan are fully functional and the personnel who are working are doing so on a voluntary basis. "There is a risk that the Afghan people will have virtually no access to primary health services," she said.

Prior to the U.S. military withdrawal, the World Bank funded the Sehatmandi project — a project administered by NGOs that in 2020 provided health care services to 30 million people. To avert a total collapse in health care, the UN Development Fund recently announced that it will temporarily take over management of the Sehatmandi project from the World Bank, but this is just a stopgap measure.

The European Union's announcement on Oct. 12 of a $1.2 billion aid package is certainly welcome news. So is the announcement by Secretary of State Anthony Blinken that the U.S. would help fund humanitarian aid. But it will be nearly impossible to effectively distribute aid while Afghan banks remain under U.S. and UN sanctions, unable to access physical dollars. And humanitarian aid will not provide salaries for the nation's civil services.

For that, Afghan's frozen funds must be released. We understand the opposition to payment mechanisms that flow through Taliban hands. For salaries, the option of direct payments through UN agencies and NGOs is indeed the preferred option, as already existed in the case of many health care workers. But can this really be accomplished for the nation's over 350,000 public workers? And how can the banking system be saved without lifting sanctions? These are issues that the Biden administration and world leaders must solve. The intricacies will be discussed at the World Bank and IMF meetings now underway in Washington and at the G20 summit in Rome at the end of the month.

Feminists must also discuss the complexities. They should not take the simplistic view that a policy of non-cooperation with the Taliban is the way to support women. As John Sifton of Human Rights Watch has said, "Afghanistan's underlying economic and humanitarian problems, which disproportionately affect women and girls, cannot simply be ignored because of the Taliban's record." We in the West who call ourselves feminists must grapple with the complexities and emerge as strong advocates for releasing funds that can stop an entire nation of 40 million people from facing a future of starvation and misery.