In Brazil’s successful vaccine campaign, a lesson for the U.S.

After a slow start, vaccination rates in Brazil have soared, thanks to a deep-rooted vaccine culture 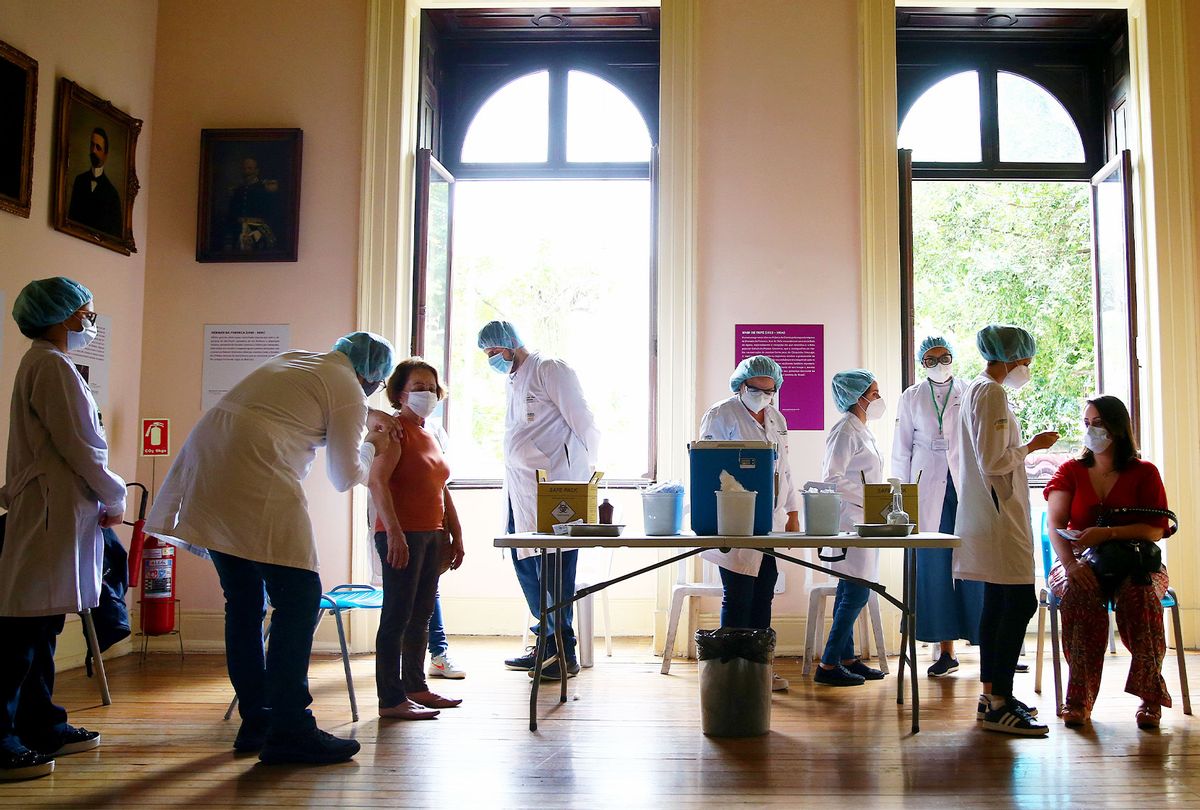 As the Covid-19 vaccine campaign gained steam in the United States last spring, I was locked down in my apartment in Rio de Janeiro, trying to avoid being infected with the virus. Brazil — then, as now, second only to the U.S. in coronavirus deaths — seemed to have the world's slowest immunization program rollout. Brazilian cities had started vaccinating locals in January, but there just weren't enough doses to go around.

As the pace of vaccinations in the U.S. soared, Brazilians were debating the merits of lockdowns and liberally taking medications with no evidence that they were effective against the coronavirus. I watched with envy as my American friends posted "I'm vaccinated!" photos on my social media feeds. So in June I left Rio de Janeiro, and returned to my hometown of Chicago where I received my first dose the day I landed.

Since then, however, the tables have turned. The vaccination rate has ramped up considerably in Brazil and stalled in the U.S. According to data compiled by The New York Times, as of Oct. 14, about 73 percent of Brazilians have received at least one dose — compared with just 66 percent in the U.S. The U.S. still comes out on top in terms of its fully vaccinated population, with 57 percent versus 47 percent in Brazil. But this gap between Brazil's fully and partially vaccinated seems poised to close: A July survey showed that 94 percent of Brazilians plan to get the coronavirus vaccine.

What happened? Despite rampant misinformation, political infighting, and failures of leadership at the highest levels, Brazil's vaccination campaign has succeeded because the country has one thing the U.S. does not: an unbreakable vaccine culture.

As Gilberto Hochman, a public health researcher at Casa de Oswaldo Cruz, a part of Brazil's Oswaldo Cruz Foundation, has previously written, Brazil's vaccination culture has rocky origins. In 1904, when the young republic was attempting to eradicate smallpox and yellow fever in Rio de Janeiro, health officials invaded the houses of the city's impoverished residents and forcefully vaccinated them. The residents countered with what has come to be known as the "Vaccine Revolt," a week-long street rebellion that left 30 people dead and ultimately brought an end to mandatory vaccination. The revolt is so ingrained in the public memory that a Rio de Janeiro carnival group pays homage every year to one of the revolt's leaders, an Afro-Brazilian named Horácio José da Silva, also known as Prata Preta, or "Black Silver."

In the late 1960s, with smallpox still circulating in the country, the then-ruling military dictatorship established the guiding characteristics that would shape Brazilian vaccine campaigns for decades to come. In a renewed effort to eradicate the disease, the government tapped community leaders — local politicians, religious leaders, athletes — and a variety of communication channels, including newspapers, loudspeakers, and films screened on school campuses, to get their message out. In large cities, mass vaccinations took place in iconic public spaces. Popular festivals, processions, religious services, fairs, and artistic performances became vaccination sites. Vaccines even reached distant countryside towns. Hochman explained that by the end of the campaign, 84 percent of Brazilians were inoculated, smallpox had been eradicated, and the country's citizens had come to view vaccinations as a public good from the state. The military dictatorship doubled down on those efforts when it created the National Immunization Program in 1973.

A decade and a half later, with the country back under civilian rule, Brazil established what is now the largest universal public health system in the world, the Unified Health System. Although it isn't perfect, it has established the government as a trusted provider of basic free health care to the communities who need it most. Anyone in Brazil can walk into a public clinic and receive any of more than 20 vaccinations for free.

When Covid-19 vaccines developed by AstraZeneca and Pfizer became widely available in Brazil this summer — augmenting the existing Sinovac-CoronaVac stockpile — municipalities followed a familiar playbook. During the weekend of Aug. 14, São Paulo mounted a citywide effort — "Vaccine Turnaround" — to vaccinate every 18- to 21-year-old. More than 600 vaccine locations dotted the megacity, and 16 locations remained open for 34 hours straight, from Saturday morning until early Sunday evening. Masked people arrived at vaccine drive-through and walk-up sites that had all the elements of a festival — music, dancers, decorations — even throngs of people waiting in line. (There were also no promises of money or lottery entries, as have become common in the U.S.)

By all measures, São Paulo's event was an incredible success. Tired of waiting a year and a half for salvation from the coronavirus, more than 500,000 young Brazilians answered the call to be vaccinated. They did as their parents and grandparents had done in the preceding weeks and months.

The event helped São Paulo, a city of 12.4 million residents, reach a Covid-19 vaccination milestone that no American city seems likely to ever reach: 99 percent of its residents 18 and older have now received at least one vaccination dose. Even Seattle's King County, which in June became the first large U.S. county to vaccinate 70 percent of its eligible residents, has administered a first vaccine dose to just 88 percent of residents aged 16 and older.

Moreover, any attempt to replicate the success of the massive São Paulo vaccination event in a major U.S. city would probably fail: We Americans love our personal independence and civil liberties, and we don't expect much of the government when it comes to health care.

Brazil's vaccination campaign is succeeding despite its president's efforts to undermine it. Jair Bolsonaro, the "Trump of the Tropics," refused at least 14 times to pre-order Covid-19 vaccines in 2020 and early 2021. A misguided policy that prioritized unproven treatments over vaccines arguably contributed to the Covid-19 deaths of more than 600,000 Brazilians — 400,000 of them after vaccines had become available in other parts of the world. Still today, Bolsonaro has only tepidly promoted the coronavirus vaccine, telling people it's their choice whether or not to get vaccinated and recently announcing that he had decided against vaccination for himself. But Brazilians have largely ignored their president, thrown individuality out the door, and gotten vaccinated.

In August, my Brazilian friend Lucas Fontainha, a 27-year-old veterinarian, summed up this culture in one tweet: "Fortunately Brazilians love vaccines, they fight for vaccines, they throw vaccine festivals, they kiss all the babies in the line waiting for vaccines, they camp overnight at the clinic to get a vaccine … even the anti-vaccination Brazilians vaccinate in secret. I love this."

Brazil's strong vaccination culture will likely make it one of the most vaccinated countries in the world by the end of the year. But that culture wasn't created overnight — it took decades of building residents' trust and forging community relationships and, of course, the creation of a universal health care system. Perhaps the U.S. could learn a thing or two.

Kiratiana Freelon is an independent journalist based in Rio de Janeiro, Brazil. Her reporting focuses on social injustice, Afro-Brazilian communities, and Brazil's dynamic economic and political landscape. A Harvard graduate, she has worked for the New York Times, and her work has appeared in The Washington Post, Essence Magazine, and New York Magazine, among others.