Matt Gaetz, MTG's PAC has blown through all of its money in last six months: report

A recent campaign filing shows the political action committee has just $13,000 on hand 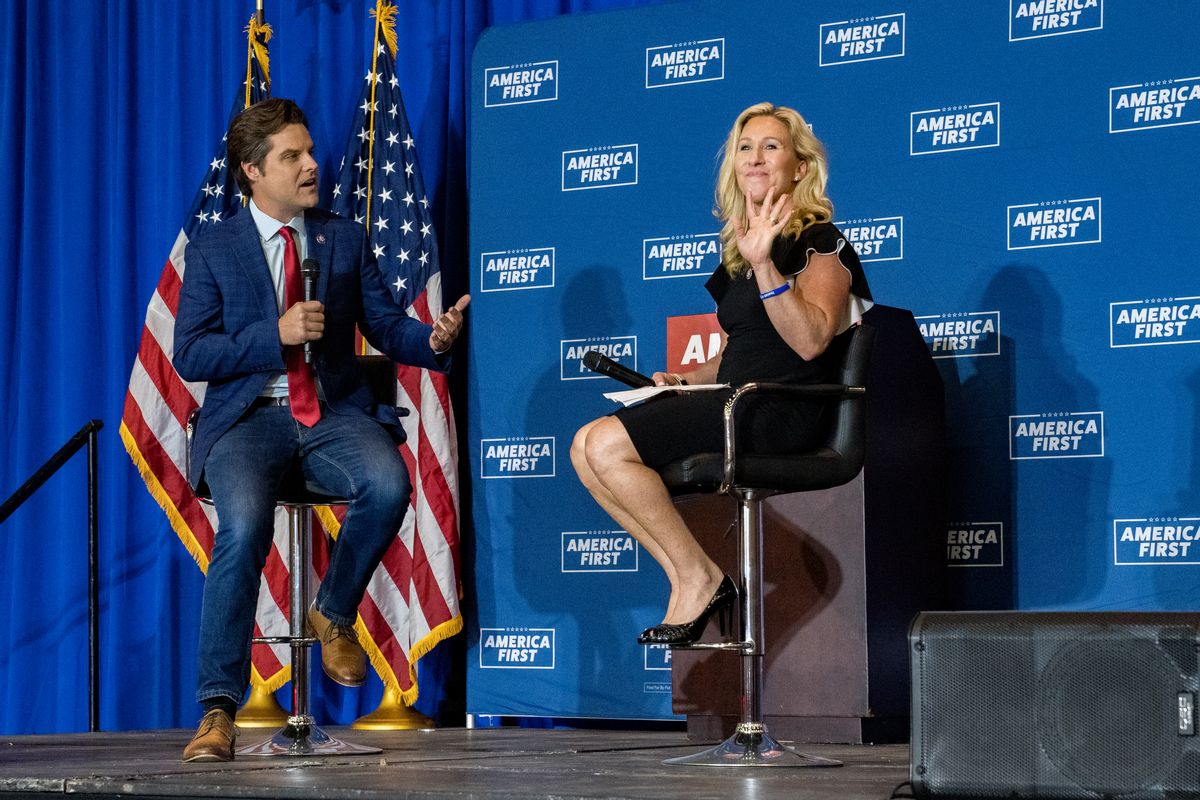 According to a report from Mother Jones, the PAC created by Reps. Matt Gaetz (R-FL) and Marjorie Taylor Greene (R-GA) with great fanfare and a national tour has already blown through what money it had and now is close to broke.

As Russ Choma reports, the publicity-seeking lawmakers started up the Put America First PAC and then launched what turned into a troubled "America First" tour -- that saw events canceled or moved multiple times due to problems securing venues -- which, in turn, burned through their early cash donations.

According to Choma, "Marjorie Taylor Greene and Matt Gaetz both have a knack for ginning up outrage and stealing headlines. All this sound and fury is assumed to hoover up dollars from the riled up grassroots, but that's not true, according to the most recent campaign finance filings, " adding, "Despite the two spending the summer barnstorming the country on a grand fundraising swing they dubbed the America First tour, (the moniker adopted after scraping the "Anglo-Saxon" caucus), neither Greene nor Gaetz lived up to expectations on the fundraising end. And, just six months after founding it, the joint fundraising committee they launched to drive their tour is nearly broke."

As the report details, the two lawmakers' PAC raised $360,000 initially but donations dropped off and a recent filing shows a meager $13,000 on hand.

Choma reports that Greene is having her own fundraising issues as well.

"While Greene is definitely more successful—in her short Congressional career she's raised more than $8.8 million—the most recent numbers filed by her own campaign show her fundraising totals are increasingly eaten up by the costs of chasing donors and paying off the operatives and professional fundraising consultants and vendors that she hires," he reported.

As for Gaetz... "Gaetz campaign's latest filing shows that his fundraising has all but dried up. He raised just $527,000 from July 1 to September 30. He spent far more—$627,000—trying to raise that money. In another parallel to Greene, Gaetz's biggest expenses are direct mail and paying fundraising consulting costs to his vendors. In fact, those two things ate up more than 60 percent of his donations," Choma reported.