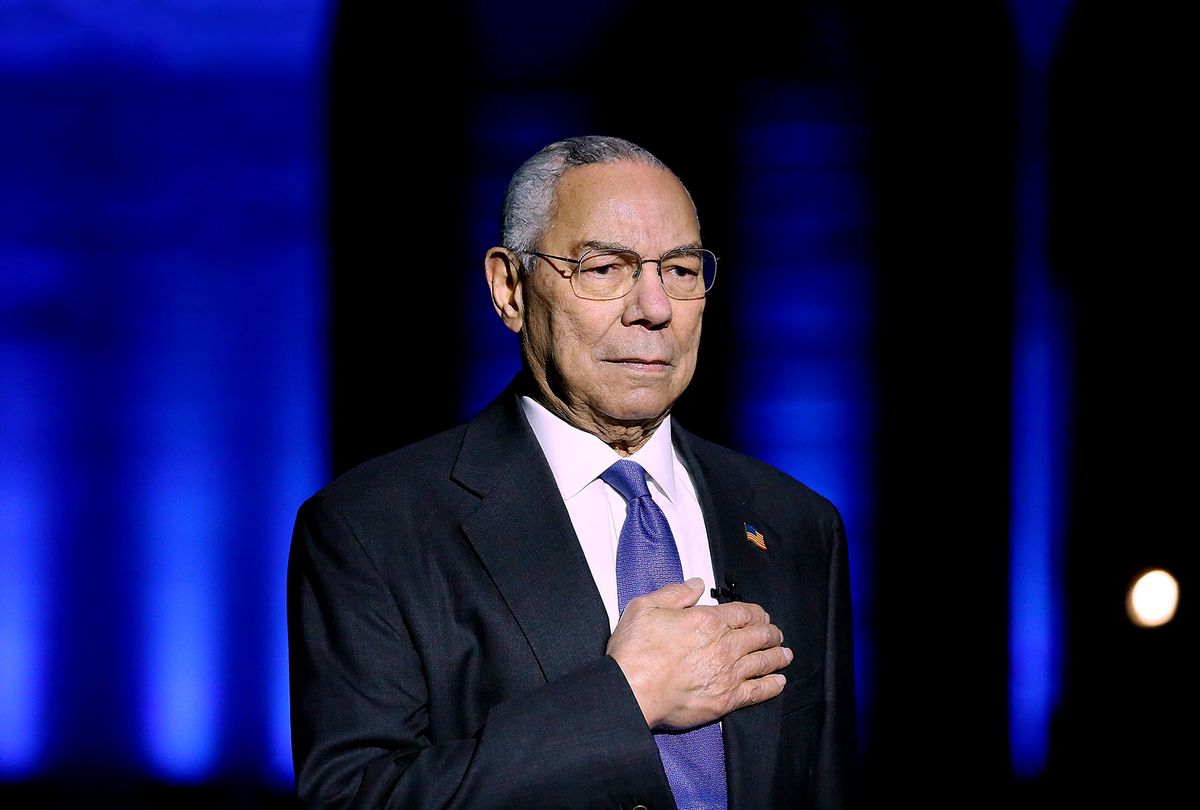 Colin Powell, the former secretary of state and chairman of the Joint Chiefs of Staff, died Monday from complications caused by COVID-19, his family said.

Powell, who was 84, was fully vaccinated and treated at the Walter Reed National Medical Center, his family said in a statement. "We have lost a remarkable and loving husband, father, grandfather and a great American," they said. Powell suffered from multiple myeloma, a blood cancer that affects the body's ability to fight infections, according to NBC News.

Powell, whose 2003 speech to the United Nations helped plunge the United States into a years-long war in Iraq, served at the top levels of the military and federal government for four decades. He was the first Black person to fill multiple high-level national security positions, including secretary of state, chairman of the Joint Chiefs and national security adviser.

The son of Jamaican immigrants, Powell began life in modest circumstances. He was born in Harlem in 1937 and mostly raised in the South Bronx. He attended City College of New York, receiving a U.S. Army commission after graduating in 1958. He served 35 years as an Army officer, including two combat tours in Vietnam. Powell was appointed as national security adviser by Ronald Reagan in 1987, serving through the end of Reagan's presidency, and then served as chairman of the Joint Chiefs under George H.W. Bush and Bill Clinton, leading military efforts in Panama and in the Gulf War. He ultimately retired as a four-star general in 1993.

A two-time Medal of Freedom recipient, was among America's most respected public figures and was long seen as a potential presidential contender before he was appointed as George W. Bush's secretary of state in 2001. Powell, who often clashed with neoconservative war hawks in the Bush administration, ultimately became Bush's point man in building a case for war in Iraq. In 2003, he gave a speech to the United Nations pushing faulty intelligence claims that Iraqi President Saddam Hussein was developing weapons of mass destruction, which were later revealed to be false.

"There can be no doubt," Powell told the UN, "that Saddam Hussein has biological weapons and the capability to rapidly produce more, many more."

Powell remained in the administration until he was asked to resign following Bush's re-election in 2004. He later said that he had been misled about the intelligence he presented to the UN, calling it "painful" and lamenting that it would be a permanent "blot" on his record.

"I regret it now because the information was wrong — of course I do," he told CNN in 2010. "But I will always be seen as the one who made the case before the international community."

He later wrote in his 2012 memoir that he was "mad" for allowing administration officials to mislead him.

"My instincts failed me. It was by no means my first, but it was one of my most momentous failures, the one with the widest-ranging impact," he wrote, adding that the "event will earn a prominent paragraph in my obituary."

Powell grew increasingly disillusioned with the Republican Party after his departure. He endorsed Barack Obama in 2008 and 2012, and then endorsed Hillary Clinton in 2016, calling then-candidate Donald Trump a "national disgrace" with "no sense of shame" in leaked private emails. Powell was critical of Trump's presidency and supported Joe Biden in 2020. He announced after the Jan. 6 Capitol riot that he no longer considered himself a Republican, blasting GOP lawmakers for failing to stand up to Trump.

"I can no longer call myself a fellow Republican. I'm not a fellow of anything right now," he told CNN. "I'm just a citizen who has voted Republican, voted Democrat throughout my entire career. And right now, I'm just watching my country and not concerned with parties."

Powell leaves behind a storied and complicated legacy but one that, as he clearly understood, has been damaged by his role in leading the U.S. to war in Iraq.

"Whatever else Colin Powell achieved in life, and it was a lot, he was the only man who could have stopped the Iraq War and instead he chose to swallow his doubts about the disaster he knew it would be and sell the invasion," wrote Spencer Ackerman, author of "Reign of Terror: How the 9/11 Era Destabilized American and Produced Trump."

"He was a great public servant, starting with his time as a soldier during Vietnam," they said in a statement. "He was such a favorite of Presidents that he earned the Presidential Medal of Freedom — twice. He was highly respected at home and abroad."