Planting a life — and a future — after prison at Benevolence Farm 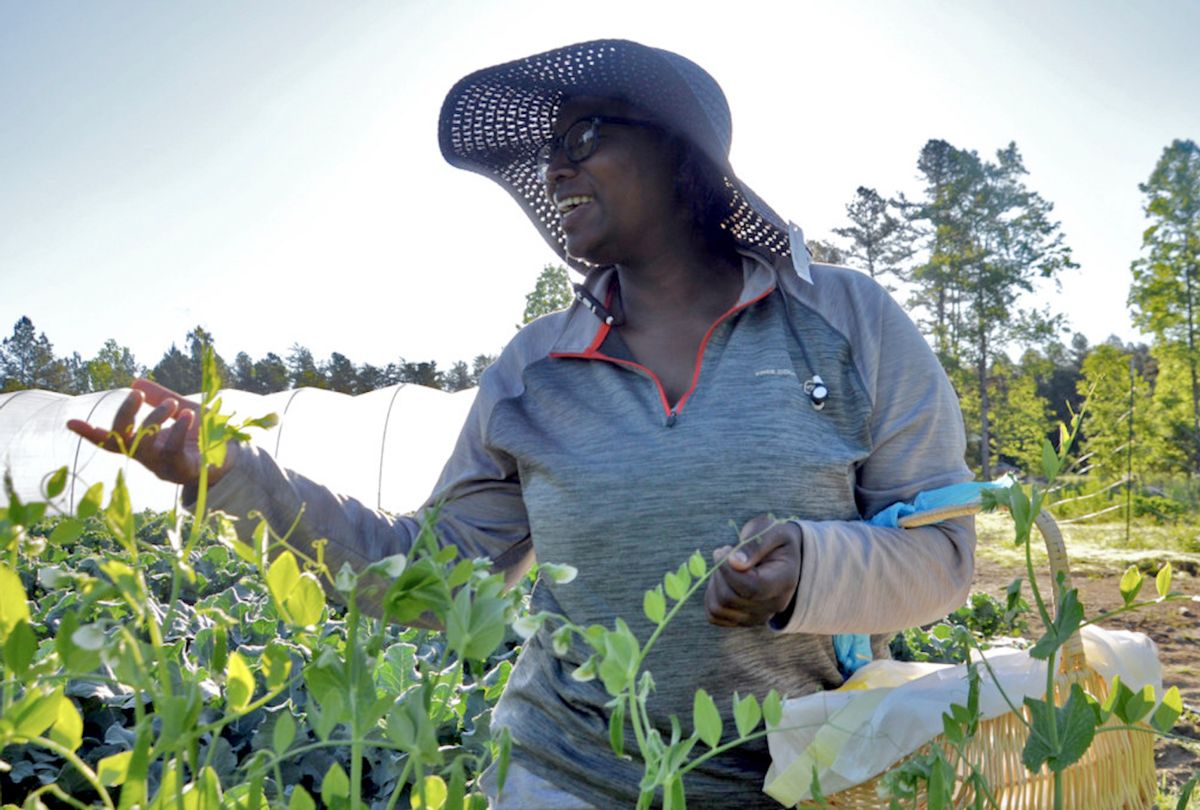 Keia Blount in the fields at Benevolence Farm. (Photo courtesy of Keia Blount)
--

In February 2017, when Keia Blount was preparing to be released after serving a five-year prison term at the North Carolina Correctional Institution for Women, she had no idea where to go.

"Family was not an option to go back to," she says. "There was nowhere for me to go except for a shelter."

At the last minute, she found Benevolence Farm in Graham, North Carolina, a transitional residential and employment program on an organic farm. She applied, a few members of the staff came to visit her in prison, and within in a week, she was admitted — just in time for her release.

"Women will be released from state prisons, but they are not guaranteed safe and secure housing," says Kristen Powers, the executive director of Benevolence Farm.

Due to the war on drugs, which began in the early 1970s, the number of women in U.S. federal and state prisons grew by nearly 800% between 1978 and 2014. But a corresponding increase in services for those women never arrived, says Powers.

As a result, in North Carolina alone, more than 2,000 women are released from state prisons each year without the infrastructure in place to adequately support them. This dearth of services prompted Tanya Jisa, a social worker who had worked at a juvenile detention center, to launch Benevolence Farm in 2008 based on her own love of farming and desire to help women break free of the prison cycle. Benevolence was created as a place where the principles of horticultural therapy could be applied to help women readjust to life outside of prison.

After acquiring the land through a donation in 2014 and preparing and cultivating it, Jisa took on their first resident, Melissie Davis, in December 2016. Blount was the second. Now, nearly five years later, the farm has hosted a total of 30 women, including the four currently residing there. By the end of the year, the house should be full with six residents. Benevolence residents stay an average one to one-and-a-half years, with a maximum stay of two years.

"Prison is such an anti-natural place," Powers says. "So what could be the benefit of nature, healing, and exposure to dirt and hands in the soil?" That's the question they started with.

A connection to the earth

For the first two weeks after Eden Gustavsen arrived at Benevolence in May 2018, she was able to relax and decompress after the 19 months she had spent in prison.

"I was really glad they gave me that time to hang out and get acclimated," says Gustavsen. Growing up, her father had a small farm, and before being incarcerated, she had lived in the mountains, where she spent time outside. "I was excited to have a connection with the earth again."

Benevolence Farm sits on 13 acres. The main residential house is a small brick structure with three bedrooms where the women live, two to a room.

A few yards from the house is a greenhouse where bundles of herbs hang to dry, and beyond that is a shelter for tractors and farm equipment. Rows of flowers and lavender, rosemary, and other herbs grow in one plot, and behind the house site sits a field of blueberries and an area where they are planning to build small homes to accommodate more women. There is also a chicken coop, and underneath the house is a large workshop where the residents turn the herbs and flowers into lotion, soap, and candles.

Although the farm receives external funding from individuals and grants, it still needs to bring in revenue. It used to grow and sell more fruits and vegetables, but it wasn't fiscally sustainable. So, two years ago, they pivoted to focus primarily on value-added body-care products, which they sell in local businesses and online.

The benefits of gardening and farming have been shown in many populations. "When you're in prison, it's pretty sedentary," Gustavsen says. "When you come out and have that physical push, that really helps. You have that confidence and feel stronger physically."

"Just being out in nature and being outside, pulling weeds, it's super therapeutic," says Megan Holmes, a transition coordinator at a juvenile detention facility in Texas and lead author of a 2019 study showing that horticultural and similar outdoor community service programs were more successful at reducing recidivism than other kinds of programs. Benevolence Farm's recidivism rate is around 5%, lower than the national average of roughly 40%.

There are a number of reasons for this, according to Joel Flagler, a registered horticultural therapist who works as a professor and agricultural extension agent at Rutgers University. Horticulture, while not necessarily easy, doesn't require a specific degree or certification to participate. For that reason, it can provide an accessible path toward consistent employment for those with little or no other options.

"Plants are non-judgmental," Flagler says. "Plants will respond to any caregiver."

In addition, horticulture offers people the chance to see the literal fruits of their labor. They plant a seed, and in a few weeks, there is something tangible. And the principles of growing can be applied to life outside of farming as well, according to Powers. In 2020, Benevolence started a program using permaculture, an approach to manage land that mimics natural ecosystems.

"We talk about permaculture principles, and the first principle is to stop and observe: How are the plants doing? Are there bugs over here? Where does weeding need to happen? And then make a plan," Powers says. "That parallels a lot to people's re-entry. Things can be [moving at] 100 miles per hour, but first let's stop and assess the situation."

There's also an important physiological aspect to working with plants. Flagler says that people are calmer around plants and tend to be more able to focus on tasks such as planting, weeding, watering, and harvesting than other kinds of work. This difference is especially important for those who have experienced trauma and have PTSD. The sensory stimulation in the garden helps — the smell of the herbs, the feeling of smooth leaves and thorny stems, the beautiful colors of flowers, the sound of grass in the wind, and of course, the taste of the food once it's harvested. There's also the gratification of knowing that your hard work is feeding you and others in your community.

On top of the mental health benefits, both Holmes and Flagler emphasized the vocational component that comes with living and working on a farm. "People need to see this is not just fun horticulture," Flagler adds. "These are real skills to get real, well-paying jobs."

This is especially important to people coming out of prison, who often struggle with a great deal of stigma. Blount, for example, has worked as a salesperson in a number of car dealerships since leaving Benevolence, but she said all of her employers since then have used her criminal record against her, in spite of her high sales numbers.

At Benevolence, the work is organized so that each woman gets experience working in different areas, such as the greenhouse, the pack house, a particular field, or the body-care area.

The women work three days a week cutting herbs, clearing fields, and planting flowers, among other activities. They make $11 an hour, although Powers says she'd like to be able to build up to a $15 wage. Each woman works between 24 and 29 hours per week, and they pay a program fee of $250 a month that covers rent and other living expenses.

During her time there, Gustavsen learned about horticultural science, plant propagation, and even how to drive a tractor. After she left in 2019, her knowledge of seasonal produce landed her a job as the front of house lead and produce buyer at the Saxapahaw General Store, a small grocery and restaurant in Saxapahaw, North Carolina, known for selling and using local ingredients. She celebrated two years in the position in August.

Benevolence is located in a rural area, about an hour's drive northwest of Raleigh. It's not an easy place to live; there's a lack of public transportation and the region is politically conservative. And, as in other rural counties, re-entry support and resources tend to range from sparse to non-existent.

Powers says she and the rest of the Benevolence team spend time advocating for more resources for re-entry in their county — things like public transportation, classes, housing, and employment, which also would help the community at large. "So many of those have ripple effects to the rest of the community," she adds.

Currently, the residents of Benevolence farm are reliant on the staff, volunteers, or their own friends and family for rides if they want to do anything off the farm, like make it to probation appointments, shop, or meet friends.

Blount, who is African American, found the remote area especially challenging. She says she often saw Confederate flags and heard racial slurs while walking to and from the farm. And when the program staff recommended she stopped walking by herself for her safety, it made her feel isolated and trapped.

Read more on Civil Eats: Did the First UN Food Systems Summit Give Corporations Too Much of a Voice?

"I was in prison outside of prison," she says. Blount also had to use her own money to go and get her hair done, since the donations Benevolence received did not include hair products for Black women. "They had not prepared for an African American woman to be there," she says.

These issues made the experience especially difficult, and she left after six months. However, she says that even despite those difficulties, the program changed her life and saved her.

"They were able to learn from my experiences so that other women of color don't have to go through the same thing. They never let me feel alone." She even sat on the Benevolence Farm board for a short time after leaving the program.

And there are some benefits to the location as well. It's far enough from daycares, schools, and parks that Benevolence can provide space for residents whose sentences — for sex work, for instance, or for connections to abusive partnerships — resulted in their being placed on the sex offender registry.

The staff at Benevolence also advocate for changes to the larger criminal justice system. Early in the pandemic, they mailed surveys to people in state prisons to gather data that would help them better understand the conditions and guide their advocacy. They work on campaigns to end the practice of charging incarcerated people fines and fees, and they hope to raise awareness among policymakers about how today's prisons impact people's lives for the worse. And they started providing the soap made on the farm to incarcerated people when the pandemic began.

This kind of work is important, says Alycia Welch, the associate director of the COVID, Corrections, and Oversight Project at The LBJ School of Public Affairs at the University of Texas at Austin. Incarcerated people are often seen as being somehow "outside" of society, and it's important that the re-entry begins while people are still incarcerated, she adds.

"From the moment they walk into any jail across this country, we should be thinking . . . 'What do we need to provide inside correctional facilities that can support women when they get outside?'" says Welch.

For its part, the staff at Benevolence are working to help the women who come to its fields — and advocating for more fairness in the system and more resources for underserved communities.

"Ultimately," Powers says, "we want to build a community where prisons don't have to exist."

Meanwhile, Blount quit her job selling cars in August and is working to grow her platform on social media, where she posts videos about life as a formerly incarcerated woman. She is also planning to write a book soon about her experiences.