Want to mix and match booster shots? Here's why public health officials aren't letting you — yet

A Johnson & Johnson shot plus a Moderna booster? It could become a reality soon 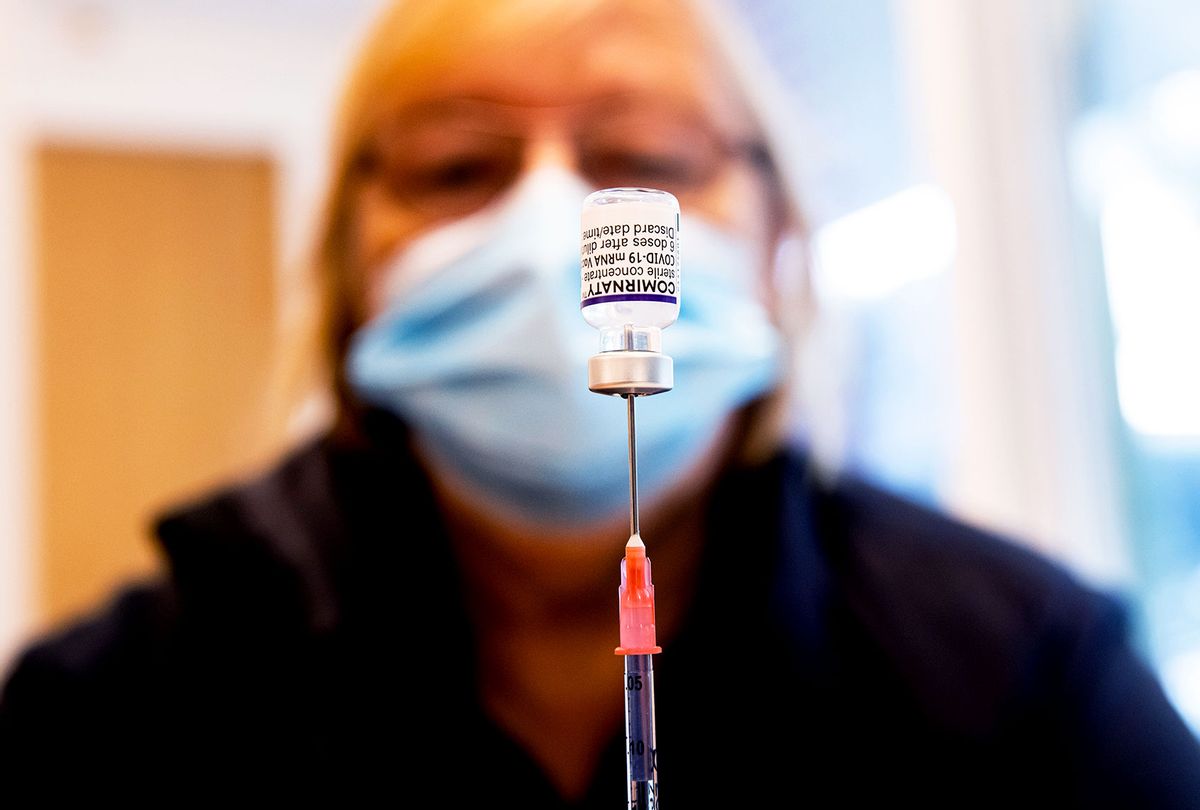 Close up of a Pfizer booster vaccine on the day that the vaccination campaign with Pfizer's third booster shot has started on October 6, 2021 in Utrecht, Netherlands. (Patrick van Katwijk/BSR Agency/Getty Images)
--

Confused about whether you're eligible for a COVID-19 booster shot? You're not alone.

A series of piecemeal recommendations for different combinations of boosters for different groups has left many confused about if they need a booster or not — or if they even qualify. It doesn't help that pharmacies have varying rules in place, sometimes lax and sometimes strict, regarding who gets additional inoculations.

Last week, an expert committee called the Vaccines and Related Biological Products Advisory Committee that advises the Food and Drug Administration (FDA) unanimously agreed that the agency should authorize boosters of Johnson & Johnson's COVID-19 vaccine to nearly 15 million Americans who have already received the initial dose. The same committee recommended Moderna booster shots to people over the age of 65 and and other high-risk adults. (Formal FDA "approval" is separate from the Vaccines and Related Biological Products Advisory Committee's recommendations, though the FDA is usually influenced by the committee.)

Meanwhile, many of those who received Pfizer's COVID-19 vaccine already have been approved for booster shots — provided they fall into certain groups.

Now, as early as this Wednesday, the FDA is expected to formally decide the question of booster shots for those who received Johnson & Johnson or Moderna's COVID-19 vaccines. What is still up in the air, however, is whether the FDA will let Americans receive a vaccine booster manufactured by a different company than the vaccine they initially received.

But until the FDA gives the final stamp of approval, only a small group of Americans are eligible for booster shots. Indeed, COVID-19 vaccine booster shots are currently only available for those who received a Pfizer-BioNTech vaccine at least six months ago and who fall under one of the following categories: people who are over the age of 65, people over the age of 18 who live in long-term care settings,  have underlying medical conditions,  work in high-risk settings, or live in high-risk settings.

"If you work in an occupation that puts you at higher risk of exposure, such as a first response, medical work or health care or someone who works in food and agriculture, teachers, education, and public transit, if you work in a grocery store, you are now all eligible," said L.J Tan, chief strategy officer for the Immunization Action Coalition, a nonprofit that works with the Centers for Disease Control and Prevention to distribute vaccine information. The reason, Tan said, was "because you're considered in an environment for an occupational setting that puts you at increased risk of exposure and transmission from those other people who are not eligible for boosters."

However, many of those who fall into these categories aren't eligible for a booster shot because the FDA hasn't approved a "mix and match" vaccine approach just yet.

At the meeting last week, researchers presented their findings of a federally funded study of people who received Johnson & Johnson's single-dose and then proceeded to receive a Moderna booster shot. Their antibody levels increase 76-fold in 15 days. Those who had previously been inoculated with Johnson & Johnson and then received a booster of the Johnson & Johnson vaccine only saw a four-fold increase in antibodies.

"If you boost people who have originally received J&J with either Moderna or Pfizer, the level of antibodies that you induce in them is much higher than if you boost them with the original J&J," Dr. Anthony Fauci, Director of the National Institute of Allergy and Infectious Diseases, said on ABC's "This Week" on Sunday. "But the data of boosting the J&J first dose with a J&J second dose is based on clinical data; so what's going to happen is that the FDA is going to look at all those data, look at the comparison, and make a determination of what they will authorize."

Tan questioned whether the FDA will approve the mix and match approach.

"There was a lot of really good discussion about what was called mixing and matching, what I call heterologous boosting — there [were] a lot of good discussions about safety and efficacy and whether we had enough data and whether the data is extensive enough," Tan said. "And so, as much as we want to be able to kind of mix and match our booster doses, I don't think that's going to happen."

Tan speculated that based on the FDA vote and the specific criteria set, those who received the Moderna vaccine or the J&J vaccine will be able to get boosters of the same vaccine. As he noted, that does not mean mixing and matching is completely out of the question. It is likely, Tan said, that more data will be needed to make a decision for what he termed an "evolving" situation.

Moreover, there may be a second round of boosters in the future — perhaps even annual COVID-19 vaccines, akin to how human civilization manages the flu with annual shot regimes.

"I wish I had a crystal ball," Tan said, when asked if boosters will be recurring.

At least for the immediate future, the public should know this week. For those who are confused if they qualify, Tan said, "I really think that the public should seriously be talking to their healthcare professionals to discuss the appropriateness of booster jabs for them."

"It is my opinion that it's critical that we reduce transmission of this virus as much as possible," Tan said. "I do think that we have to keep an eye on reducing transmission, because we need to somehow stop the emergence of these variants, and to stop transmission of the virus, even from people who have been vaccinated."