The venue — Caesars Palace — might have been selected because of price, but there's a dark poetry to the choice 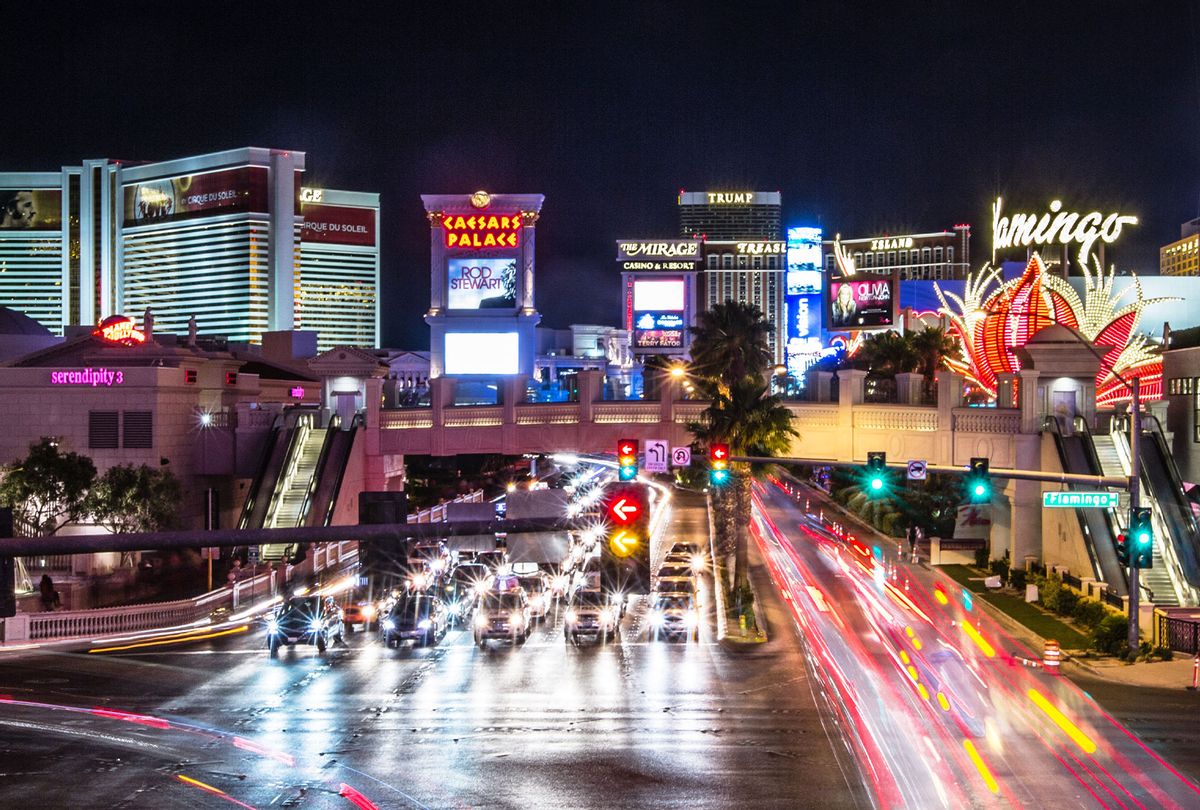 The Heartland Institute's 14th International Conference on Climate Change, which took place this past weekend at Las Vegas' comically opulent Caesars Palace, is named to mislead the casual observer into thinking it's a legitimate event. But in reality, events during the conference included jaw-droppers such as a discussion of "the supposed justification for a rapid transition to expensive and unreliable 'green' energy," a session on "how to oppose woke capital, activist investors, and financial regulators [sic] efforts to cancel traditional energy," and what promises to be a rousing interrogation into "the scientific method, and how the United Nations' reports repeatedly violate it."

The idea of these conversations happening alongside rows of Buffalo Gold Revolution slot machines brings to mind feminist artist Barbara Kruger's famous and oft-repeated epithet, "a ridiculous clusterfuck of totally uncool jokers." It is really too easy to ridicule people who are so cynically and wilfully blind to reality that they can look around at the burning West and flooding South and say, "Nothing has to change here!" Climate denial, stated that blatantly, reads more like malice in 2021. But when it is expressed more quietly, through the ways we live and the things we want, it is seldom mocked.

If you look at the climate crisis and want to know how we got to this mind-boggling place in history, Las Vegas is not a bad entry point. The strip is full of things to gawk at. It was designed that way: to provoke awe at just how big and tacky and loud a man-made place can be. Which makes it an all-too-appropriate destination for a three-day gathering of the world's biggest, tackiest, loudest deniers of man-made climate change.

The fact that this gathering takes place at the iconic casino explicitly built to recreate the sumptuousness of the Roman Empire is a little too perfect. Since its 1966 opening, Caesars Palace's motto has been a series of variations on the idea that "every guest should feel like a Caesar." That is to say, every person to cross its doors is entitled to the most lavish extravagances imaginable.

Generally speaking, there's a direct relationship between emissions and excess. While a climate-compatible lifestyle doesn't have to be oppressively ascetic, it's probably not one that includes a 1.2-mile strip of luxury stores (even if it did give us the timeless "it's Ver-SAYCE" line from Showgirls) and "the largest order of Ukrainian caviar ever placed."

In her book Ancient Rome and Modern America, Margaret Malamud, a historian of ancient societies at New Mexico State University, wrote: "In Las Vegas' recreation of the Roman Forum [at Caesars Palace], the ostentatious wealth and power of corporate raiders and entrepreneurs like Donald Trump are held up as desirable and obtainable, and consumption and consumerism are presented as historically and culturally valued ways of fulfilling desire."

But it's an American value with staying power — and that's due in no small part to the fact that there's a powerful contingent of people whose wealth is dependent on Americans' desire to consume things that have harmful consequences, be it for our own health or for that of the environment. And these are the people and companies who have historically funded the Heartland Institute: the cigarette manufacturer Philip Morris, ExxonMobil, the Walton family, the Koch family.

But, at least with the Heartland Institute's particular form of climate denial, there are signs of waning popularity. As Alexander Kaufman reported for HuffPost last year, the organization is "broke" and its dwindling funders have veered further and further right. It's a sign that the position that the climate change that we're seeing today — and that scientists predict will only worsen in years to come — is the result of the Earth's natural changes, and demands no major societal and economic changes, is now the provenance of extremists.

And yet the growth of Las Vegas itself, a city of excessive tastes carved into the desert, is something of an exercise in climate denial. The population of Nevada's Clark County, which contains Las Vegas, has grown by 20 percent over the past decade and is projected to grow another 20 more in the coming one. The region, like much of the West, is in a record-breaking drought, and it's warming faster than any other metro area in the country. No one who lives in Las Vegas deserves to have to play host to a cohort of people who have fought tooth and nail against their own right to protect and strengthen themselves against hotter, drier days to come.

Although the selection of Caesars Palace as the Heartland venue may very well have come down to competitive pricing (the venue did not respond to a request for comment), it's hard not to read into the poetry of it. The historian Kyle Harper attributes the fall of the Roman Empire — which wasn't a sudden event, but prolonged over a couple of centuries — to two major forces: microbial plagues and climate change, which probably sounds uncomfortably on the nose.

Harper has emphasized in his work that the anthropogenic climate change we're facing now is of a very different variety than what the Romans dealt with, which was the kind of geologically normal variations influenced by natural Earth cycles and the occasional major volcanic eruption. The carbon emissions-driven greenhouse effect we have now is a force that's warming the climate at a faster rate than ever before, with both more extreme and longer-lasting effects than we've seen in human history.

It is easy to be smug about stubborn people and their backward beliefs, and the attendees of the Heartland conference certainly deserve little to no warmth of empathy. But it is less easy to see — and to ridicule — the ways that denial permeates our own still-uninterrupted desires for luxury, excess, and escape.

Rome had its own Las Vegas, just up the coast from modern-day Naples, called Baia. It's where the empire's wealthy would vacation to go, in modern parlance, buckwild. But if you want to visit Baia today, you will find it difficult. The city, due to an unfortunate combination of seismic rumbles and the soft earth on which it was built, now sleeps under the waves of the Mediterranean.