Why madeleines are making a comeback in Paris

The “traveling cakes” deserve more than a Proustian moment 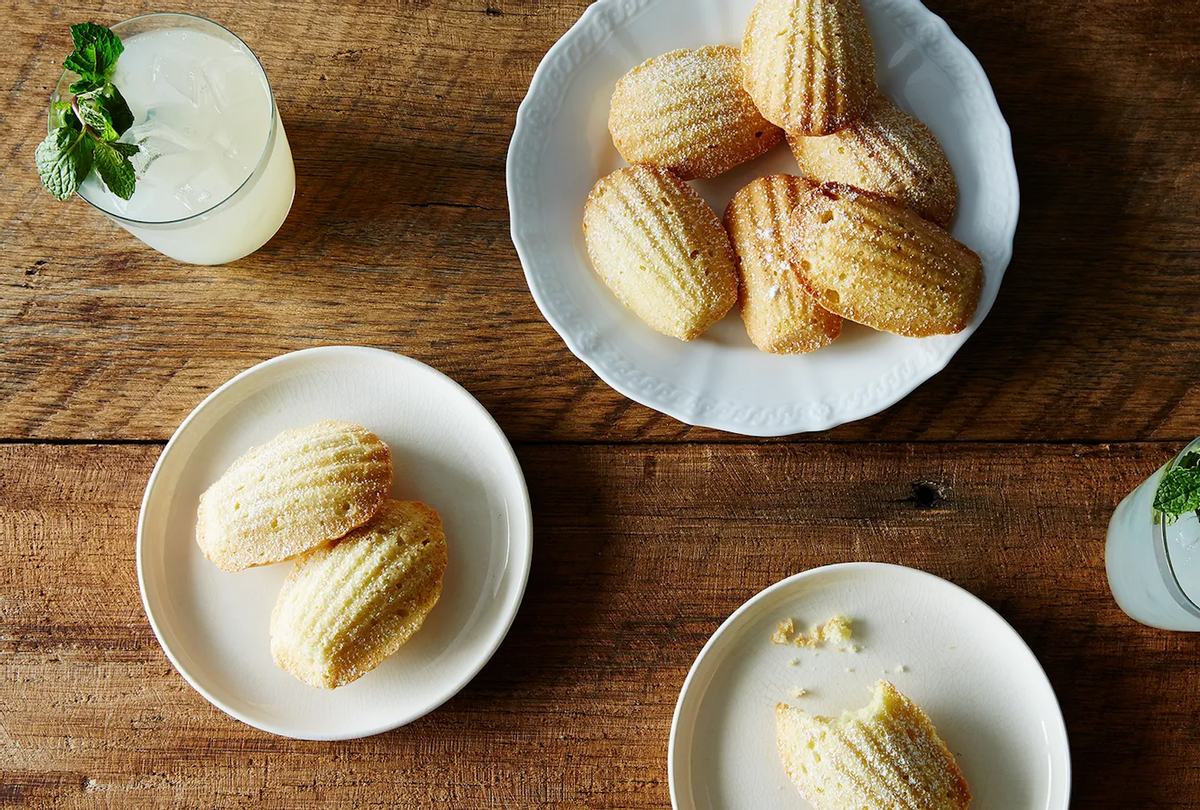 With its fluted shell shape and rich, buttery flavor, the madeleine is the prototypical French gâteau de voyage, or "traveling cake." Compared to flaky croissants or delicate entremets that can barely survive the trip from the pastry shop to the kitchen table, madeleines are a relatively sturdy and unassuming confection whose simple appearance belies their deliciousness. A well-made madeleine is light and airy, with a distinctive buttery aroma. Glazed, filled, or plain, the madeleine is a standard of the childhood "quatre-heures" — four o'clock snack. But for a long time, until recently, the madeleine was perceptibly absent from French bakery shelves.

When French newspaper Le Figaro first noted this dearth back in 2014, it posited a link to the omnipresence of another similar cake, the financier, invented in Paris' Bourse district as a treat for stockbrokers who feared smudging their important documents with chocolate or cream. The newspaper also highlighted the then-newfound popularity of English-style baked goods like scones and muffins that, Le Figaro quipped, "surfed on the fashion of teatime" and eclipsed this more native treat. But despite a decline in fashionability, the madeleine's history is long and illustrious.

The cake originally hails from the Lorraine region, where it was invented, depending on whom you ask, by nuns at the local convent of Mary Magdalene or by a servant girl named Madeleine Paulmier, who shared the recipe with Stanislaus I, the deposed king of Poland and father-in-law of King Louis XV, when his pastry chef was pushed to the brink by his court jester. The latter story is preferred by the tourism office of the city of Commercy, home to not only the castle where Stanislaus ostensibly discovered the cake, but also now to some of the most famous madeleines in the country.

But while madeleines have been long beloved in Lorraine, according to Lorraine Actu, they didn't begin to gain renown elsewhere in France until the Paris-Strasbourg rail line was inaugurated in 1852, at which point Anne-Marie Caussin, marquise of Carcano, began sharing the local cakes with her guests. Twenty years later, a special dispensation paved the way for the sale of the little cakes on railway platforms, and in the 1920s, both Commercy and nearby Liverdun — a lesser-known but still popular cradle of the cake since the 19th century — saw artisanal factories opening to keep up with the demand.

Pastry Chef Gilles Marchal was one of the first modern Parisians to focus on the cake, just seven years ago: His Montmartre shop boasts a madeleine logo, business card, and even door handle. This clear focus comes down to his roots: After all, Marchal was born and raised in Lorraine.

His evocation of memory is not incidental, when it comes to this little cake. After all, author Marcel Proust's 1913 novel "Swann's Way" offered many their first brush with the tiny cake. In the novel, the memory of a madeleine dipped in tea paves the way for the narrator's senses to be "invaded" by "an exquisite pleasure," a passage so well-known among the French that a "madeleine de Proust" has colloquially become shorthand for one's most nostalgic and visceral food memories.

Madeleines are not Bresse-born pastry chef François Perret's madeleine de Proust; that honor goes to his grandmother's mousseline cake or his father's crème anglaise. But upon his arrival at the Ritz in 2015, Perret was inspired by the luxury hotel's Salon de Proust to create a madeleine of his own design: doused in a small amount of milk scented with lemon, designed to be eaten off a spoon in a single mouthful.

"The idea," he said, "was to create an experience, to create a moment."

The madeleine quickly became the chef's signature, and he would explore it again and again: at the Bar Vendôme, it took the form of a trompe l'oeil entremets made of Savoy biscuit, toasted almonds, and a chestnut honey center. The dessert "looks like a madeleine," he said, "but as soon as you put your spoon to it, you realize it's not a madeleine." At the recently opened Ritz Le Comptoir pastry shop, meanwhile, Perret brings his madeleine story back to its roots, with little cakes available in seven different flavors, each glazed and filled with jam, chocolate, or, Perret's favorite, chestnut honey, which boasts "a lovely bitterness that allows you to counterbalance the sugar content."

"I wanted people to be able to make their own gift boxes," he said of the madeleines, which are shelf-stable for up to five days. "And above all, I wanted them to be transportable."

At Marchal's eponymous shop, 70 flavors — sweet and savory — rotate through the pastry case, according to the seasons. On any given day, somewhere between 12 and 15 madeleines are on offer, from fig to praline, Sicilian pistachio to salted butter caramel, black truffle to Parmesan-balsamic.

Such artisanal approaches to the madeleine are ever more essential, Marchal said, given the steady march of industrialization. The formerly artisanal production of the madeleines de Commercy of his youth was replaced by industrial producer Saint-Michel in 1986, and many people — even in France — associate madeleines not with a homemade cake or a pastry-window treat, but with a supermarket staple individually packaged in plastic.

"Sometimes I ask myself," said Perret, "if the fact of seeing so many industrial ones didn't make people want to eat real ones. Real, good madeleines."

Thibault, too, recalls industrial madeleines as a staple of his childhood, dubbing them "stodgy" and "not terribly interesting." When he decided to put a hot madeleine on his menu five years ago after tasting one fresh out of a baker friend's oven, he sought to highlight above all the ideal texture of a madeleine cooked à la minute.

"It's not the benchmark madeleine — far from it," he said. "It's just the madeleine the way I like it, and that's the most important thing."

"My Instagram account has an entire theme devoted to my all-time favorite French cake," she said, and she notably asked one of her favorite chefs, Rémi Poulain of Restaurant Le Christine, to put his own spin on her favorite treat. When he did, he dubbed the resulting dessert "Marie Madeleine" — a reference to DeGross herself (and to Mary Magdalene, for whom the cakes may well be named).

A dolled-up restaurant or pâtisserie iteration of the madeleine is all well and good, but these days, they are also emerging — demure, inexpensive, and simple — in corner bakeries, taking an unassuming spot not only alongside croissants and pains au chocolat but also other relative newcomers to the capital, like Breton kouign amann and gâteau basque. Indeed, these formerly regional delicacies are "coming back into fashion," according to Marchal. "It's become a bit trendy to say, 'Let's highlight cakes from our terroir.'"

This, he says, stems in large part from migration away from France's villages and thus from the close-knit, multigenerational families of yore. "Unfortunately, there are fewer and fewer family gatherings than there used to be," said Marchal. "I'm 50; I was lucky enough to have that."

In cities, he said, the presence of these local delicacies "reminds us of our childhood."

"It's very regressive," he continued. "And when you talk to someone from Lorraine who's in Paris, who comes from where I come from, and who suddenly sees pretzels and madeleines in Paris, he's proud. He's proud to say, 'Oh, wow. The madeleine de Lorraine has been highlighted in Paris.'"

But even for someone who has no Proustian memory associated with the madeleine, when made properly, the simple butter cake is pure bliss.

"We cook them fresh every morning," said Marchal, "and when they come out of the oven, people can smell them right in the shop."

Some claim that the madeleine may well be the next big thing, and while Marchal "wouldn't presume that the madeleine could dethrone the macaron," he does note that people are beginning to understand it as a "great product of French terroir."

"Some are starting to see that, at the end of the day, a fresh madeleine baked daily — and that's important! — is to die for," he said. "It's something truly extraordinary."