Africa, home to only three glaciers, will lose all of them due to climate change

Africa contributes less to global warming than any other inhabited continent, but will lose its glaciers anyway 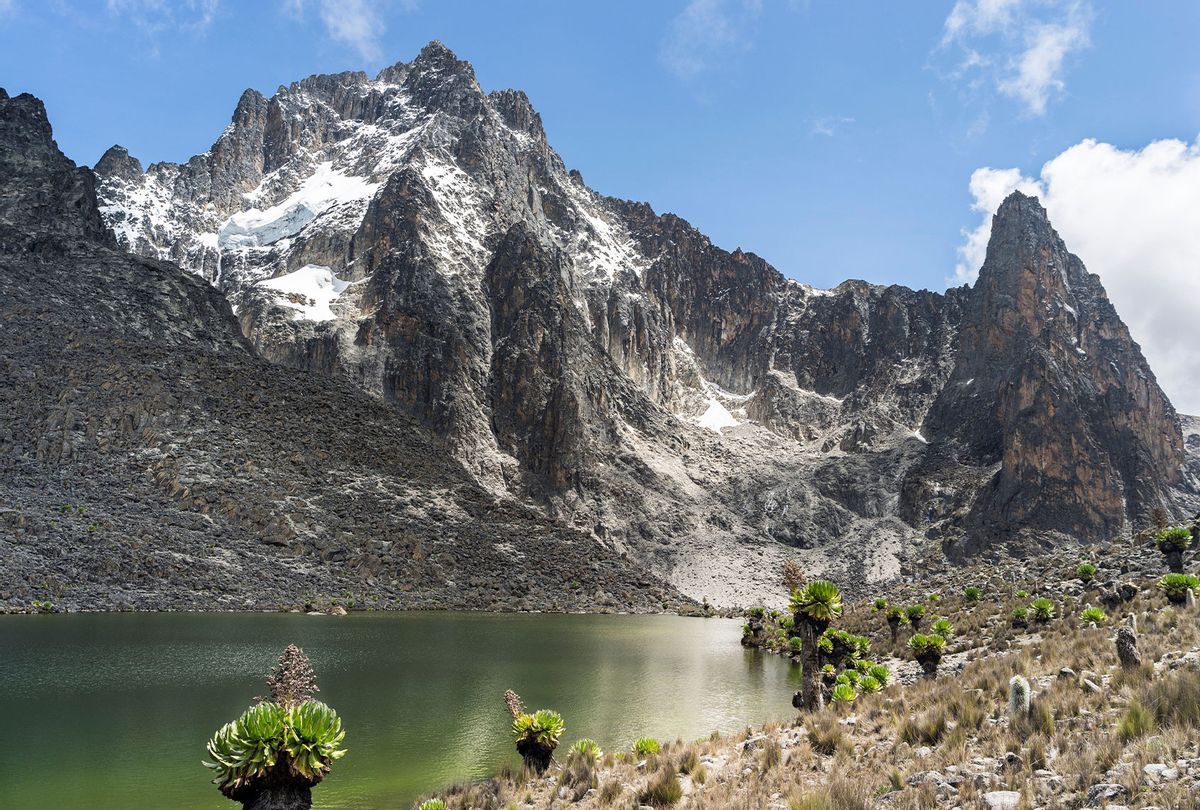 The central part of Mount Kenya with Batian (front) and Nelion (back) and typical afroalpine vegetation of Giant Lobelias and Giant Groundsel. The western rock face with the melting glaciers of Mt. Kenya. (Martin Zwick/REDA&CO/Universal Images Group via Getty Images)
--

The snows of Mount Kilimanjaro are nothing short of iconic. Photographs of the dormant volcano in Tanzania often highlight the white streaks on the side, which grow thicker as they rise toward the top. When you arrive at the cap of the volcano, it becomes nothing but white, like a dollop of cream pressed flat and smeared over the top of a lava cake.

Thanks to climate change, however, Mount Kilimanjaro is warming up. That means that while there still may be snow atop the mountain in a few decades, it is likely that the glaciers will disappear.

There are only three mountains on the entire African continent that are covered by glaciers, according to a recent report by the World Meteorological Organization and other agencies. In addition to Kilimanjaro, these include the Rwenzori Mountains in Uganda and the Mount Kenya massif in Kenya, and they are vital to the economies of the surrounding areas. The glaciers bring in tourism and are closely studied by scientists. They are also, tragically, retreating at a much faster rate than glaciers throughout the world are doing on average — a cruel irony, considering that the 54 countries in Africa contribute less than four percent of global greenhouse gas emissions.

This fact was not lost on the authors of the report. Moreover, the loss of the glaciers is not the biggest humanitarian problem facing Africa due to global warming: the continent faces rising sea levels, floods, droughts, landslides and extreme weather events.

Still, the loss of Africa's glaciers symbolize how priceless natural wonders are being irreversibly destroyed by greenhouse gas pollution, as well as the fact that populations which did very little to cause this problem are being most affected.

"The rapid shrinking of the last remaining glaciers in eastern Africa, which are expected to melt entirely in the near future, signals the threat of imminent and irreversible change to the Earth system," WMO Secretary-General Prof. Petteri Taalas explained in a foreword to the report. The authors also did not mince words about their somber predictions for the future of African mountain glaciers.

"If this continues, it will lead to total deglaciation by the 2040s," the authors explained. "Mount Kenya is expected to be deglaciated a decade sooner, which will make it one of the first entire mountain ranges to lose glaciers due to human-induced climate change."

The report focused on the economic impact of climate change in Africa, noting that gross domestic product may fall in the sub-Saharan region by up to three percent by 2050 because of warming temperatures. By 2030, the co-authors project that up to 118 million people in the region who are classified as extremely poor (meaning they live on less than $1.90 per day) will be exposed to floods, droughts and extreme heat because of climate change. The authors also noted that Madagascar is already facing "famine-like conditions" due to climate change and that South Sudan is seeing the worst flooding in more than half a century. Despite these stark realities, African countries are notoriously underrepresented in multinational groups that attempt to address the problem of climate change.