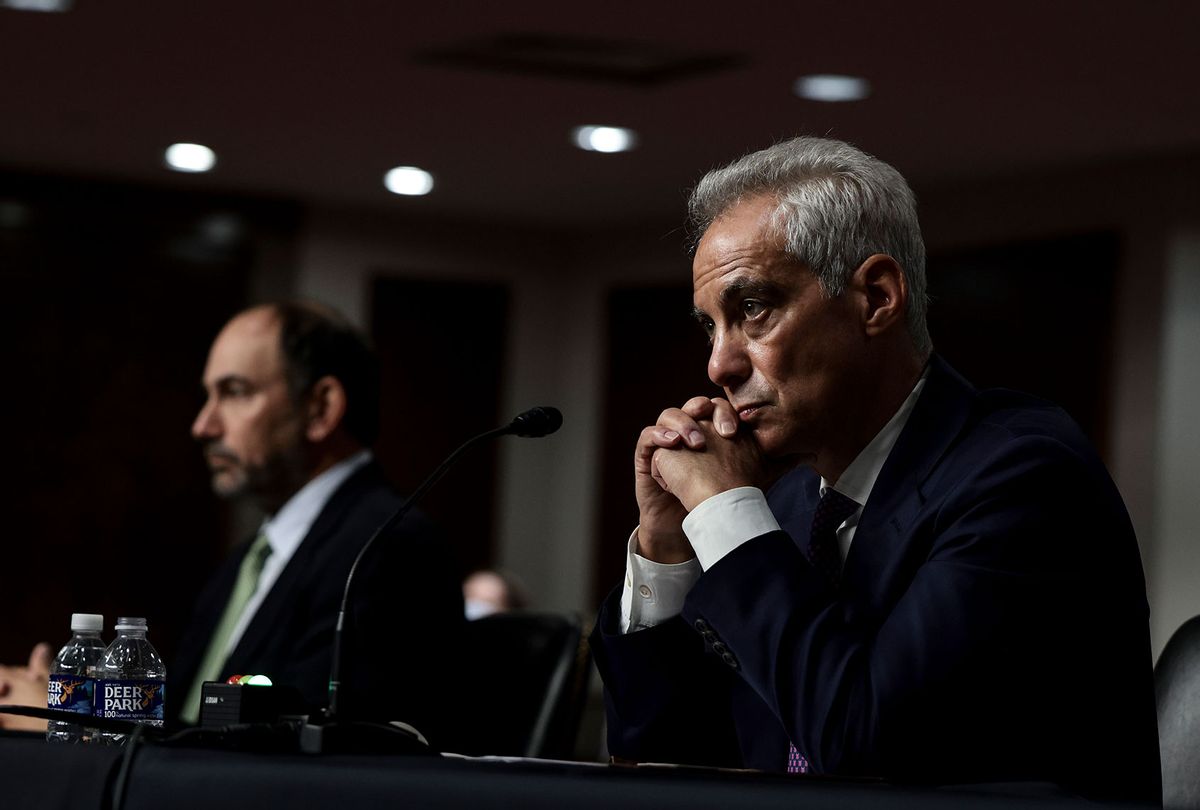 Rahm Emanuel, former Mayor of Chicago and former chief of staff in the Obama White House, listens during a confirmation hearing before Senate Foreign Relations Committee at Dirksen Senate Office Building on Capitol Hill October 20, 2021 in Washington, DC. Emanuel will become the next U.S. Ambassador to Japan if confirmed by the Senate. (Anna Moneymaker/Getty Images)
--

At Rahm Emanuel's confirmation hearing as potential ambassador to Japan before the Senate Foreign Relations Committee, Sen. Jeff Merkley, D-Ore., deserves credit for questioning Emanuel about what he knew as Chicago's mayor about the police murder of 17-year-old Laquan McDonald — and when he knew it. Wednesday's Senate hearing, as it happened, marked the seventh anniversary of McDonald's killing, to the day.

But Emanuel was thoroughly dishonest, under oath, when he testified that his administration could not release the shocking dashcam video of the shooting because it did not want to taint "the integrity of an investigation" — and that if a politician intervenes in the release of evidence, "you've politicized that investigation."

Anyone who knows the timeline of events can see the big lie in this testimony. It was the suppression of the video that was "politicized" — a suppression that was decisive in Emanuel's 2015 re-election as mayor. As for the so-called investigation, it had little or no "integrity."

McDonald was killed on Oct, 20, 2014, and the police review authority and the Cook County state's attorney promptly launched investigations (followed by the U.S. attorney). Crucially, they soon had access to dashcam video clearly showing that McDonald was veering away from Officer Jason Van Dyke, who shot him repeatedly, including as McDonald lay on the ground. Authorities quickly received the official autopsy showing 16 shots.

This was an open-and-shut case, and it started leaking to community leaders and independent journalists that the police claim about McDonald having lunged at police was totally false.

Authorities had all the vital evidence within weeks, and certainly by the end of 2014.

Emanuel stood for re-election on Feb. 24, 2015, four months after the shooting. In an article about the upcoming election that appeared a week before McDonald's death, Chicago Reporter journalist Glenn Reedus noted that Emanuel's "tumbling poll numbers put him in poor stead among the city's African-American voters." Reedus reported: "An August poll by the Chicago Tribune put Emanuel's approval rating at 35 percent. His popularity dropped across all demographics. It is difficult to imagine that with the overwhelming majority of those opposed to him or undecided, there is a possibility he will be returned to office."

With the video still unknown to the public, Chicago voters denied Emanuel a majority vote in February 2015, forcing him into a runoff. Emanuel had received 46 percent of the vote; progressive Cook County Commissioner Jesús "Chuy" García (now a member of Congress) had received 34 percent.

The video remained under wraps during the hard-fought runoff between Emanuel and García, which was very much a battle for the hearts and minds of Chicago's African-American voters. On April 7, 2015, Emanuel won the runoff by 56 to 44 percent. If the video had not been suppressed, it's clear Emanuel would not have been re-elected.

Eight days after Emanuel's re-election, the Chicago city council approved — without any debate — a $5 million payout to Laquan McDonald's family, even before a suit was filed; the settlement, crucially, included an agreement that the family could not release the video.

For the next seven months, from April 2015 until November 2015, nothing happened in this open-and-shut case. The authorities indicted no one.

But on Nov. 18, 2015 — a full 13 months after the shooting — Cook County Judge Franklin Valderrama began considering a lawsuit filed by freelance journalist Brandon Smith demanding release of the dashcam video. A day later, Valderrama ordered the city to release the video.

On Nov. 24, 2015, Cook County State's Attorney Anita Alvarez, who'd sat on the video for more than a year, brought charges against Officer Van Dyke for first-degree murder. Hours later, the city complied with the judge's order by releasing the dashcam video to the public — leading to angry street protests and loud calls for the mayor to resign, with a poll showing that most Chicagoans (by 51 to 29%) wanted Emanuel to step down.

Under oath on Wednesday, Rahm Emanuel portrayed the 13-month suppression of the video as needed to safeguard the investigation's "integrity." All it safeguarded was Emanuel's chances of re-election.

In the few minutes he was afforded at yesterday's hearing, Merkley was correct to probe what Emanuel knew about the murder and when he knew it. All he heard from Emanuel was double-talk and evasion.

Now all eyes will be on Merkley — and other Democratic senators who profess that "Black lives matter" and that police need to be held accountable — to see whether they vote to confirm this tainted mayor and elevate him to a prestigious ambassadorship.