Trump has embraced the narrative of the defeated South: Lie about everything, and double down on vicious bigotry 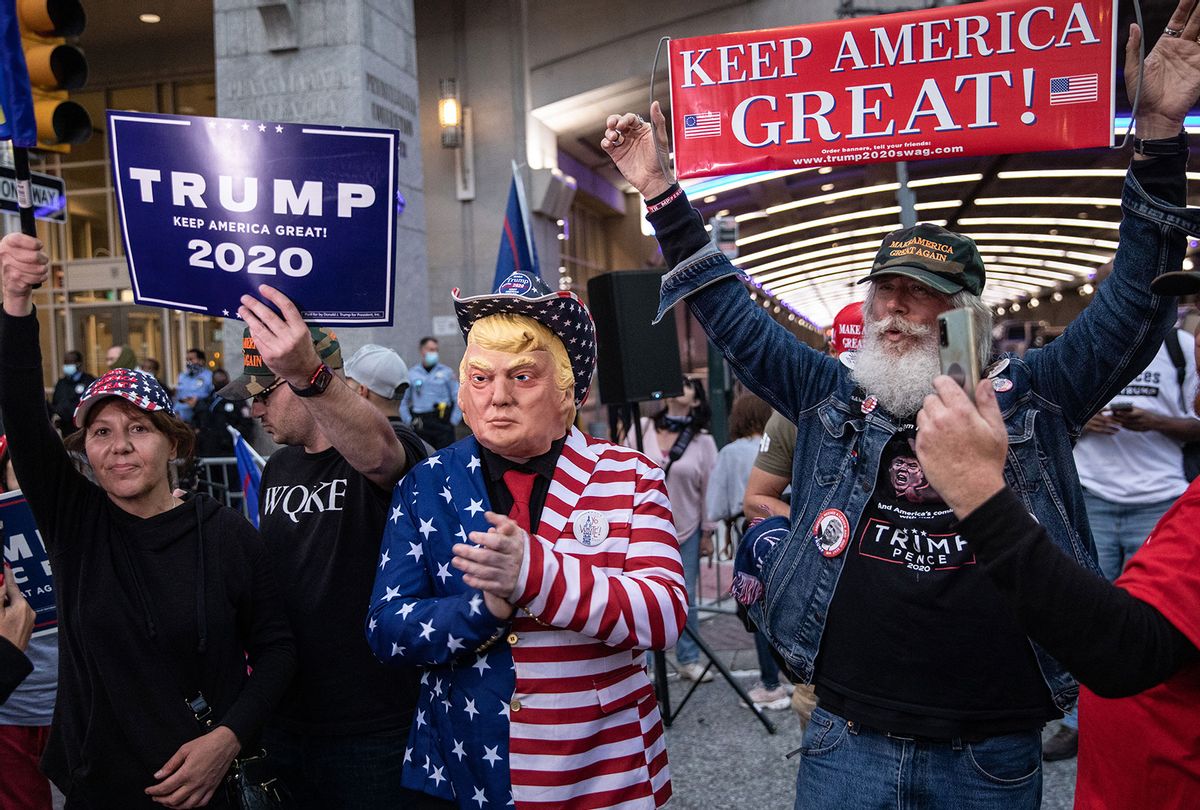 Supporters of U.S. President Donald Trump chant slogans and hold signs outside of the Philadelphia Convention Center as the counting of ballots continues in the state on November 06, 2020 in Philadelphia, Pennsylvania. (Chris McGrath/Getty Images)
--

Perhaps the biggest of many imponderables about Donald Trump has always been the question of what playbook was he following? His 2016 campaign didn't have a plan beyond questioning the manhood of his male primary rivals and ceaseless yapping about Hillary Clinton's "emails." His 2020 campaign never found a focus until October, when he seized upon his victory over his own case of COVID-19 as evidence of his manhood. Remember his return from Walter Reed Medical Center to the White House? Trump was ripping off his mask on the Truman balcony! That'll show 'em!

In between campaigns, Trump's presidency seemed aimless, stumbling vaguely forward from one indictment to another until the time came to issue pardons, which we soon learned was his "favorite" presidential power — not being commander in chief, not ordering up Air Force One to fly him off on his many golf weekends, not even being able to pick up his bedside phone in the middle of the night and order a Big Mac and a Diet Coke. The pardon power was it.

Losing the election in November and having to move out of the White House has given him something to focus on, however. He never cared about governing and didn't have much of an ideology to guide him, but he's finally found something he can believe in and a playbook he can follow: his very own Lost Cause. Trump has embraced with gusto the South's strategy after losing the Civil War: Tell your own people that you didn't really lose, and double down on the nobility and honor of what they still believe in. In the case of the Civil War, it was slavery and the inherent superiority of whiteness and inferiority of blackness. The new Lost Cause is of course Trump himself, to whom his followers attach the same kind of gauzy metaphors that came into use after the Civil War: flags (Trump campaign flags, the Confederate flag and the "Don't Tread on Me" banner are in heavy rotation) songs ("I'm Proud to be an American" by Lee Greenwood and — perhaps not so ironically now — "You Can't Always Get What You Want" by the Rolling Stones are played at all his rallies) and symbols (Mar-a-Lago has become a kind of antebellum shrine to the garish excess Trump represents).

And of course, most important of all are the lies. The lies told to support the South's Lost Cause were as outrageous as they were numerous: Slaves were well treated by their kind and understanding masters and were far better off than they would have been had they remained with their savage tribes in Africa. The war wasn't fought over slavery, it was fought for the cause of "states' rights." Gender roles were preserved in revanchist amber: Men were the protectors of Southern white women's "honor" and "purity," and women returned the favor by forming the Daughters of the Confederacy and charging themselves with erecting the monuments to Confederate war heroes and the Confederate dead which became ubiquitous throughout the South.

RELATED: A New Confederacy: Trump and the Republicans have already seceded

It's hardly necessary to delve into Trump's lies about the election: They have been well documented and confirmed by more than 60 losses in his lawsuits contesting the election's outcome in battleground states. Trump has now launched himself into an adjunct of the Big Lie — the lie that the violent assault on the Capitol on Jan. 6 wasn't violent and wasn't an assault, but merely a "tourist visit" by Trump supporters, while outside agitators and antifa infiltrators committed all the violent acts to tarnish the Trump cause. Trump has turned Ashli Babbitt, killed at the head of a mob as she broke through a door into an area of the Capitol where members of Congress were sheltering, into a martyr. And his minions on Capitol Hill have done everything in their power to stymie and tarnish the work of the House committee investigating the assault, including voting en masse against a nonpartisan commission to investigate the Capitol assault and now opposing the move by the House to hold Steve Bannon in contempt for defying a subpoena to provide documents and testify before the House committee.

Bannon is in the process of transforming himself into a latter-day Robert E. Lee, talking about commanding a 20,000-strong army of "shock troops" he plans to use to intimidate "enemy" voters during the 2022 and 2024 elections.

The centerpiece of Trump's personal Lost Cause is nursing his grudge, and the collective grudge of his followers, against the "elites" they blame for bringing down the dream. Which involves, of course, whipping up the festering sore of resentment and hate that is the Trump "base." The South used the KKK and later the so-called Citizens Councils. Trump has the Proud Boys and the Oath Keepers. I am certain we're going to learn from the House committee that Trump himself was involved in their deployment on Jan. 6 in the violent assault on the Capitol.

Perhaps the most important way the South promoted its Lost Cause after the Civil War was through electoral and legislative means. The rebellion of Southern states against the Reconstruction laws and the 14th and 15th amendments is instructive. Major figures of the Confederacy took prominent roles in the Democratic Party. The Confederate raider and first Grand Wizard of the KKK, Nathan Bedford Forrest, and other Confederate veterans attended the Democratic convention of 1868 in New York where one of Forrest's friends, Frank Blair Jr., was nominated as the party's candidate for vice president on a ticket with a former governor of New York. Their campaign slogan was "Our Ticket, Our Motto, This Is a White Man's Country; Let White Men Rule." Speeches against emancipation of the slaves given by Blair were said to contribute to Ulysses S. Grant's comfortable electoral victory.

Later, Southern states would virtually nullify the 14th and 15th amendments by passing the Jim Crow laws, stripping Black citizens of the right to vote and consigning them to subservient roles in the Southern economy and society little better than those they had held as slaves. The South separated itself from the rest of the country by its continuing adherence to the doctrines and practices of white supremacy in its legal and social systems.

Something very similar is going on right now in Republican-controlled states, including all of those that comprised the Confederacy, with state laws being passed to suppress the votes of minorities and gerrymander legislative districts to limit representation by minorities and the Democratic Party in general. It's a kind of legalized second secession by Republican states and the Republican Party, which has remade itself as the Trump Party, parroting Trump's racism and lies about the election and following his lead in Jan. 6 denial.

The words constitutional crisis and slow-motion Civil War have entered the lexicon. Former Republican writers like David Frum, Robert Kagan, Charlie Sykes, David Brock and Max Boot are all over the op-ed pages, warning that Trump and his allies are preparing to "ensure victory by any means necessary."

"The stage is thus being set for chaos," Robert Kaplan wrote recently in a widely shared op-ed in the Washington Post. "Partisans on both sides are likely to be better armed and more willing to inflict harm than they were in 2020. Would governors call out the National Guard? Would President Biden nationalize the Guard and place it under his control, invoke the Insurrection Act, and send troops into Pennsylvania or Texas or Wisconsin to quell violent protests? Deploying federal power in the states would be decried as tyranny. Biden would find himself where other presidents have been — where Andrew Jackson was during the nullification crisis, or where Abraham Lincoln was after the South seceded — navigating without rules or precedents, making his own judgments about what constitutional powers he does and doesn't have."

Donald Trump had to be handed a loss in 2020 in order to begin championing his new Lost Cause. There won't be another one. If he runs and wins in 2024, we will not recognize the smoking ruins left by a second Trump victory. It won't take them long to begin erecting statues to Steve Bannon and Tucker Carlson and renaming public squares after the "Great Replacement." The only question is, what will the Daughters of the New Confederacy call themselves? The Mistresses of Mar-a-Lago?

More on the Republican Party's efforts to reanimate the Confederacy: