Transport your taste buds to cloud nine with banana, chocolate and pumpkin 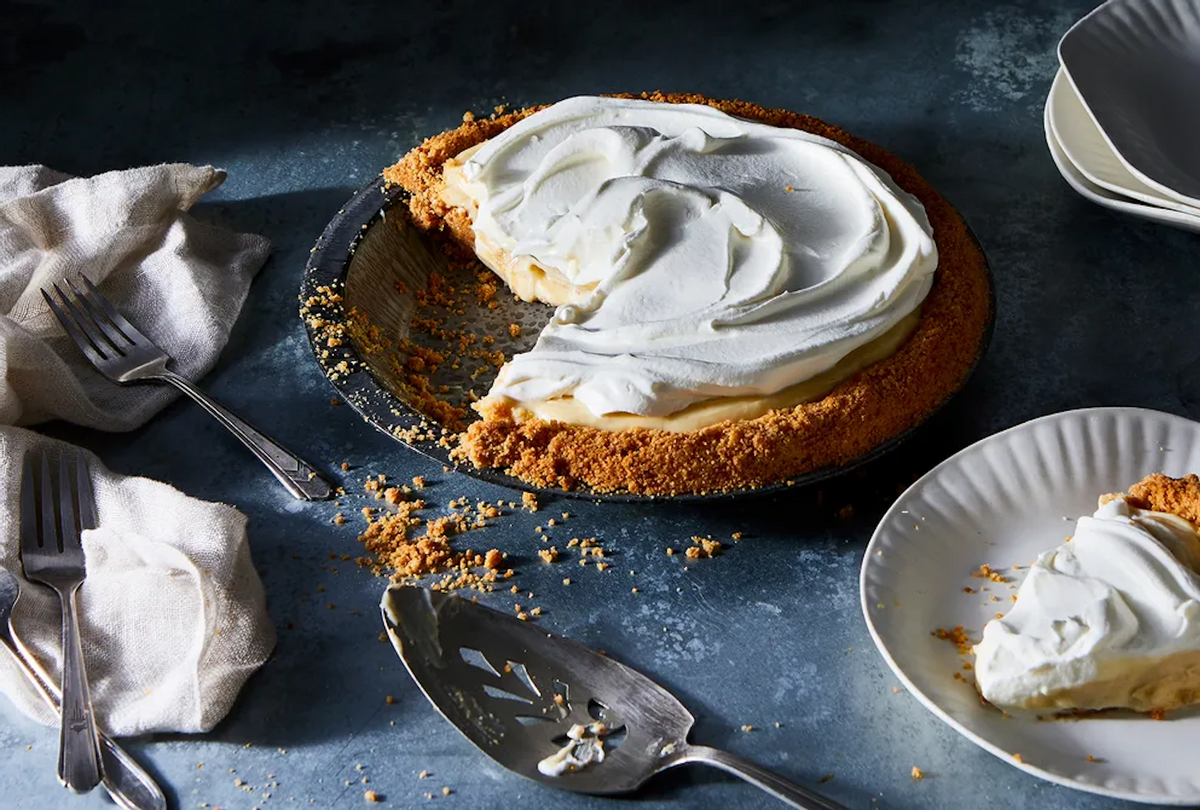 Cream pies are not the same thing as custard pie. They're also not exactly pudding pies or ice cream pies or gelato pies (yes, those are a thing, too). They're in their own lovely lightweight field, able to take on the flavors of summer with juicy berries and coconut just as easily as they can become chocolate or maple or eggnog, making the perfect holiday dessert. Every cream pie is a little different, but they generally call for egg yolks, heavy cream, vanilla extract, sugar, and butter.

I grew up eating my grandma's banana cream pie for every holiday — Father's Day, Thanksgiving, my grandpa's birthday, and even anniversaries. Each bite of this cream pie recipe, featuring a Nilla wafer crust and whipped cream topping, tastes like home to me.

Coconut lovers (myself included) will adore this triple-coconut cake, which has flakes in the crust, filling, and whipped cream topping. It gets even more flavor and richness from coconut milk, which teams up with egg yolks to form the luscious filling.

For a silkier, richer, and all-around-better cream pie, follow recipe developer Alexis DeBoschnek's lead and make the filling with sweetened condensed milk. While you're at it, swap the usual graham crackers for a Biscoff cookie crust instead.

If you want to serve pumpkin pie for Thanksgiving but are sick of the old-fashioned, somewhat temperamental version, make this light and airy cream pie instead. You're best off making it at least a day in advance so that it has plenty of time to chill in the refrigerator.

Recipe developer Kenneth Temple thought long and hard about how to make a better chocolate cream pie. The solution? A filling made exclusively with egg yolks, rather than whole eggs, for more flavor, less moisture, and a richer consistency.

Think of this dessert as a strawberry shortcake in the form of a decadent cream pie.

"Light, fluffy, and wonderfully creamy, this pie is made with a Biscoff cookie crust, which gets topped with a rich, rum-tinged vegan coconut custard and an airy, lightly sweetened coconut whipped cream," writes recipe developer Murielle Banackissa.

This springtime cream pie is a total showstopper, starting with raspberry whipped cream piped into the shape of blossoming flowers and a sweet vanilla custard filling.

Leave it to Erin Jeanne McDowell to not only make a pie out of a romantic flavor combination — chocolate and strawberries — but make it look so sweet, too!

Caramelized bananas get their sweetness from brown sugar and cinnamon in this rich, delicious upgrade to the classic banana cream pie.

Craving a taste of the tropics? This luxe key lime pie with a perfectly torched vanilla sea salt meringue will take your taste buds to the southernmost point of the U.S. in no time.

In a creamy twist on the classic lemon pie, Swiss meringue buttercream is piped in a never-ending swirl on top of the cream filling, instead of the usual meringue. The filling gets a triple dose of tartness from lemon oil, lemon zest, and freshly squeezed lemon juice.

You can thank Erin Jeanne McDowell for this double-chocolate pie that features two layers: a ganache base topped with the milk chocolate cream filling. It's rich (but not too rich), fudgy (but not too fudgy), and perfectly chocolatey.

Meet everyone's favorite childhood sandwich in the form of a cream pie featuring a graham cracker crust, peanut butter and cream cheese filling, and a thin layer of jam on top. Recipe developer Erin Jeanne McDowell loves raspberry or strawberry, but use your favorite flavor for a taste of nostalgia.

Is this the chicest pie that's even been baked? Possibly. Hiding beneath a crunchy, crystallized sugar topping is a rich vanilla custard and buttery crust. It's two desserts in one — what's better than that?

Coffee and chocolate are #couplegoals. They bring out the best in each other. Sweet chocolate softens the flavor of bitter spent coffee grounds, and coffee enhances all the dark notes in the chocolate. Together, they make for one incredible cream pie.

"With crushed-up Oreo cookies as the crust and a beautifully textured black-and-white appearance, this pie is a wonderful cooling-off dessert for the summer, but is also delicious enough to serve at the end of any holiday meal, from Thanksgiving to New Year's Eve and beyond," writes recipe developer Sarah Jampel.

Add 3/4 cup of dark rum to the dreamy custard for a pie that tastes like a glass of eggnog on a beautiful winter's night.