Bernie Sanders vows to stand firm on Medicare expansion: "It's not coming out!"

"It's what the American people want and, after waiting over 50 years, what they are going to get." 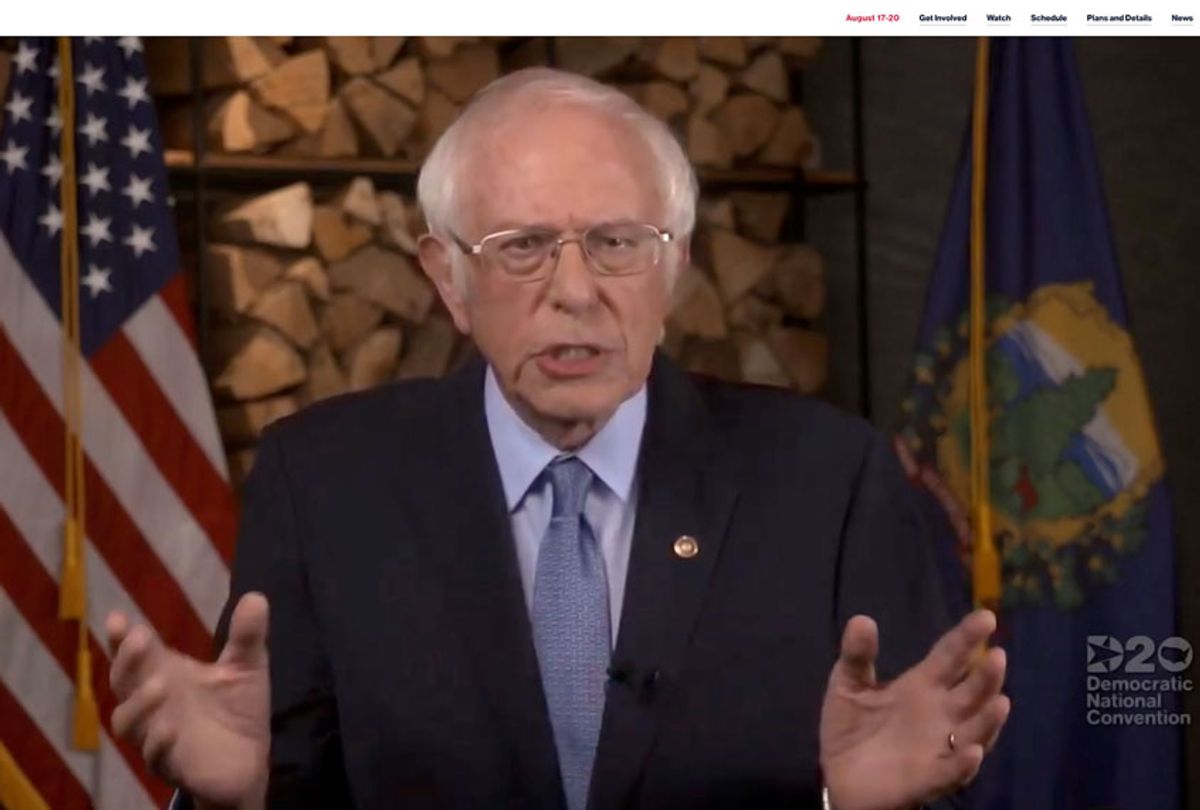 In this screenshot from the DNCC’s livestream of the 2020 Democratic National Convention, Sen. Bernie Sanders (I-VT) addresses the virtual convention on August 17, 2020. The convention, which was once expected to draw 50,000 people to Milwaukee, Wisconsin, is now taking place virtually due to the coronavirus pandemic. (Handout/DNCC via Getty Images)
--

Sen. Bernie Sanders on Saturday was quick to push back on reporting that two of the most popular provisions in President Joe Biden's Build Back Better plan — an expansion of Medicare benefits and guaranteed paid family leave — are poised to be dropped from the proposal due to objections from right-wing Democrats.

"It's not coming out," Sanders said of a measure that would expand Medicare to cover dental, hearing, and vision care for tens of millions of older Americans — a proposal he has pushed for years and which is supported by 84% of Americans including nearly nine in 10 Democratic voters.

"Politico" reported late Saturday that amid negotiations between the White House and Democrats which left the president announcing at a town hall on Thursday that the package may include only four weeks of paid leave instead of 12 as well as leaving out tuition-free community college and a clean electricity program, further discussions have led the White House to consider dropping paid leave and the Medicare expansion entirely.

A Democratic aide told the outlet that the inclusion of the two programs were "in flux" Saturday while the White House denied that they may be cut.

"It is inconceivable and unconscionable to me that there is any risk for a paid leave being on the chopping block, considering the ongoing pandemic, the women's jobs crisis, the care tsunami, the birth rate issues — all of the combined and overlapping crises deepening racial and gender inequality," Dawn Huckelbridge, director of Paid Leave for All, told "Politico". "The fact that something this administration has run on and Congress has championed would not be a priority to me is unbelievable."

Sanders and other progressives have spent months defending the provisions in the $3.5 trillion, 10-year investment in climate action and social supports for lower- and middle-income families.

Despite saying in January that he would back a $4 trillion infrastructure package, Sen. Joe Manchin, D-W.Va., is holding up passage of the bill, insisting he will now only support $1.5 trillion in social spending.

Sanders has harshly criticized Manchin and Sen. Kyrsten Sinema D-Ariz., — another conservative Democrat who is refusing to join the rest of the party in backing Biden's agenda — comparing their conduct to his hypothetical refusal to support the Build Back Better plan unless it included Medicare for All.

"My strong criticism is it is wrong when the American people, when the President of the United States, when 96% of your colleagues want to go forward — it is wrong to obstruct," Sanders said earlier this month.

Thanks to Manchin and Sinema, author and activist Don Winslow tweeted, the party is prepared to drop two of the most widely supported measures from the president's agenda.

"They work for Mitch McConnell and big corporations," said Winslow of the senators.

One paid leave expert questioned whether the White House is doing enough to defend the priorities that have been gradually weakened during negotiations with Manchin, Sinema, and other conservative Democrats.

"I want to know whether [Biden] is putting his weight behind [paid leave] when he's behind closed doors with Sen. Manchin and others that he's negotiating with," Vicki Shabo, a senior fellow at the think tank New America, told "Politico".

The reporting about the status of the negotiations, which were ongoing Sunday, came as the "New York Times" echoed the warning repeated for months by progressives regarding the potential failure to pass an agenda that provides far-reaching support for the voters who sent Biden to the White House and gave the Democratic Party control of the House and Senate last year.

"Strategists say enthusiasm among core Democratic voters is critical to defeating the Republican Party in the midterm elections of 2022 (and perhaps [former President Donald Trump], its leader, two years later)," reported the Times. "If crucial parts of the president's coalition remain unhappy because they are disappointed in the compromise bill, that could threaten Democratic hopes to remain in power in Congress and the White House."