The trial of Richard Spencer is underway in a Virginia courtroom 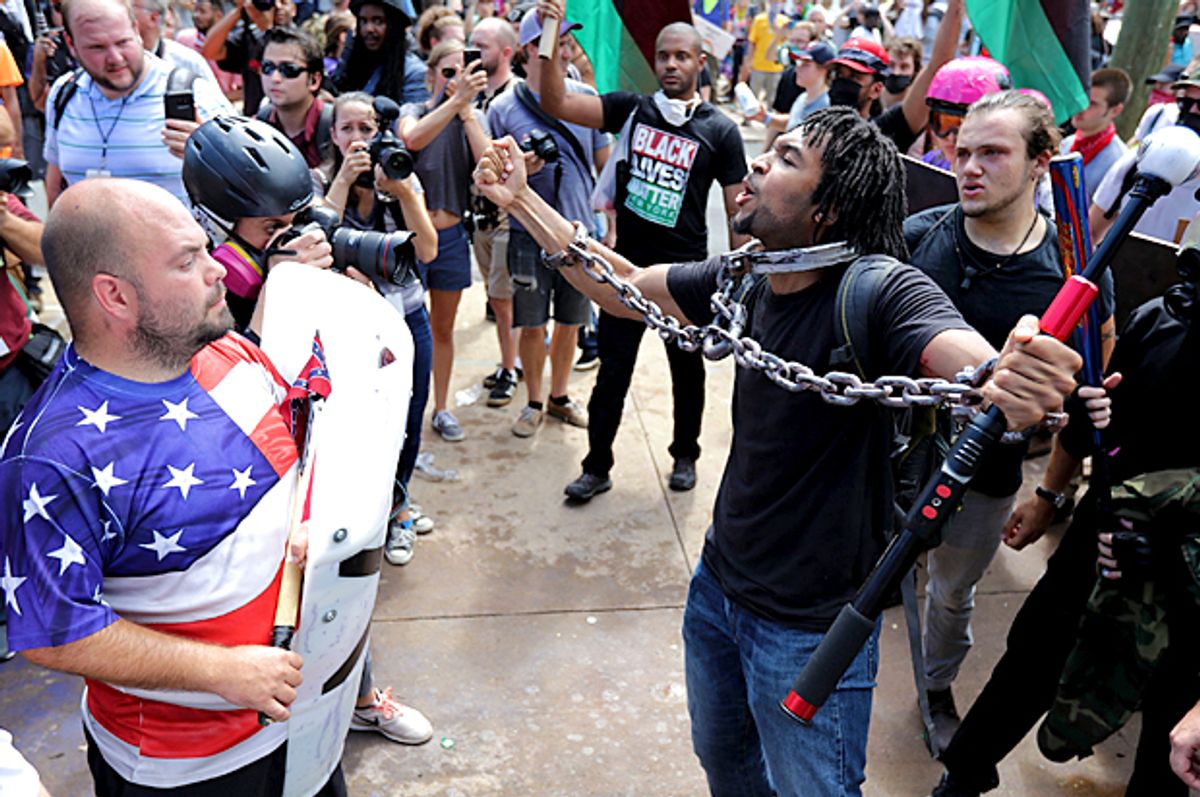 Plaintiffs in a landmark civil trial that began today in Charlottesville, Va. will try to prove that organizers of the deadly Unite the Right rally four years ago conspired to commit racially motivated violence.

But as the trial got underway on Monday, controversy surrounding prospective jurors' negative views of "Antifa" sent an ominous signal about the prospect of defendants deflecting blame.

Richard Spencer, the one-time figurehead of the alt-right, and neo-Nazi Christopher Cantwell, who is currently serving an active prison sentence on a separate matter, are representing themselves.

Jason Kessler, the local organizer of the Unite the Right rally, and Nathan Damigo, founder of Identity Evropa were represented by two lawyers in court.

Other lawyers are representing James Alex Fields Jr., who is currently serving a life sentence for murder in the car attack that killed Heather Heyer; Matthew Heimbach and Matthew Parrott of Traditionalist Worker Party; Michael Hill and Michael Tubbs of League of the South; and Jeff Schoep, former commander of National Socialist Movement.

Two days before the start of the trial, the plaintiffs requested that Cantwell be severed from the other defendants, in consideration of his due-process arguments, suggesting he could be tried at a later date when he is no longer incarcerated. Cantwell said in open court on Monday that he opposed being severed from the case, and Judge Moon denied the motion in accordance with his wishes.

While the plaintiffs' request was turned down, the matter afforded them the opportunity to head off a post-trial appeal by Cantwell. Roberta Kaplan, one of the lead attorneys for the plaintiffs, told Judge Norman K. Moon the request to sever Cantwell from the other defendants was made to balance the need to move forward with the trial after four years against Cantwell's "legitimate right to have documents in real time — or as in real time as possible — to prepare."

She added, "If he opposes being severed from the case, we believe he has waived any due process argument for appeal."

Going into the trial, the plaintiffs have harbored concern that negative views of "Antifa" could prejudice jurors against holding the white supremacist organizers of Unite the Right responsible for the violence that ensued during the rally. In a motion filed on the eve of the trial, the plaintiffs requested that the court automatically excuse "any prospective jurors who hold extreme views about 'Antifa' and its members."

During voir dire on Monday, Judge Moon asked prospective jurors who had expressed negative views about "Antifa" on their questionnaires if they were able to set aside what other counter-protesters may have done, and "try the case between these plaintiffs and these defendants." Moon reminded some of the prospective jurors that the plaintiffs were not "Antifa."

Karen Dunn, a lead attorney for the plaintiffs, told Judge Moon she didn't think his questioning on jurors' views of "antifa" was sufficient.

Judge Moon dismissed Dunn's concern, suggesting that counsel for plaintiffs and defendants confer to mutually agree upon jurors that should be excused because their responses exhibited bias towards one party or the other.

The court seated a prospective juror who told the court he views "antifa" as "involving themselves in racial riots and stuff and causing a lot of problems." While questioning the juror, Moon clarified: "No one is claiming that any member of antifa is a party in this case."

Cantwell indicated that, in fact, he does plan to claim during trial that at least one plaintiff is involved with "Antifa."

"It's actually my understanding that one plaintiff is an adherent or at least a sympathizer of Antifa," Cantwell interjected, referring to Seth Wispelwey, a United Church of Christ pastor who organized an interfaith clergy group to protest the Unite the Right rally.

(The plaintiffs have stated for the record that they are not members of Antifa.)

In response, Judge Moon admitted his lack of knowledge about the antifascist movement, saying, "I don't know the structure of Antifa. Do they have members sign up?"

Dunn jumped in, continuing to press her case: "Mr. Cantwell's argument underscores why it would be wrong to have people with extreme views about Antifa on the jury."

Later, as Moon questioned another juror who said she believes Antifa is a "terrorist organization," Dunn said she was concerned about the juror's ability to be impartial considering that Cantwell plans to draw connections between the plaintiffs and Antifa.

Moon suggested he wouldn't allow the defendants to pursue that argument without evidence.

"If you have evidence, bring it," he said.

"I intend to ask, Mr. Wispelwey if he tweeted, 'Jesus was Antifa,'" Cantwell said. "Because, in fact, he did."

Moon declined to excuse the juror for cause, but the plaintiffs later used one of their peremptory strikes to keep her off the jury.

Moon dismissed another juror who said he views Antifa as "terrorists" and that he did not believe he could set aside his opinion.

Judge Moon dismissed a Black woman from the jury for cause. A school bus driver, the woman wrote on her questionnaire that she had "feelings towards hate groups that disrupt the peace." Under questioning by Judge Moon about whether she could set aside her own opinions and follow the evidence to reach a fair decision about the defendants, the woman said, "I would think I could. I don't know. I have so much personal opinion. I know how to be fair and listen. I don't know why that's difficult for me to explain. I would like to think that I could. But a hundred percent? I don't know."

The juror caught Spencer's attention. During the lunch break, a hot mic caught him saying, "The bus driver who couldn't answer the question — that strikes me as a cause."

When defense counsel formally objected, Dunn noted to the court that she was the only minority on the first of four panels to seat the jury. Moon responded that he gave the woman an opportunity during questioning to convince him that she could put her personal beliefs aside to render an impartial judgement solely on the evidence.

"I felt I went as far as I could to rehabilitate her, and I feel she did not," the judge said. "I'm going to excuse her for cause."

By the end of the day on Monday, which ended with a deluge outside the courthouse in Charlottesville, Judge Moon had seated seven jurors from two panels. He said he plans to call two more panels tomorrow, but said jury selection could run over to Wednesday morning, adding that he would like to have opening statements on Wednesday afternoon.