Joe Biden calls out Glenn Youngkin for trying to distance himself from Trump: “Is he embarrassed?”

"He won't allow Donald Trump to campaign with him in this state" — but pledges his loyalty in private, Biden says 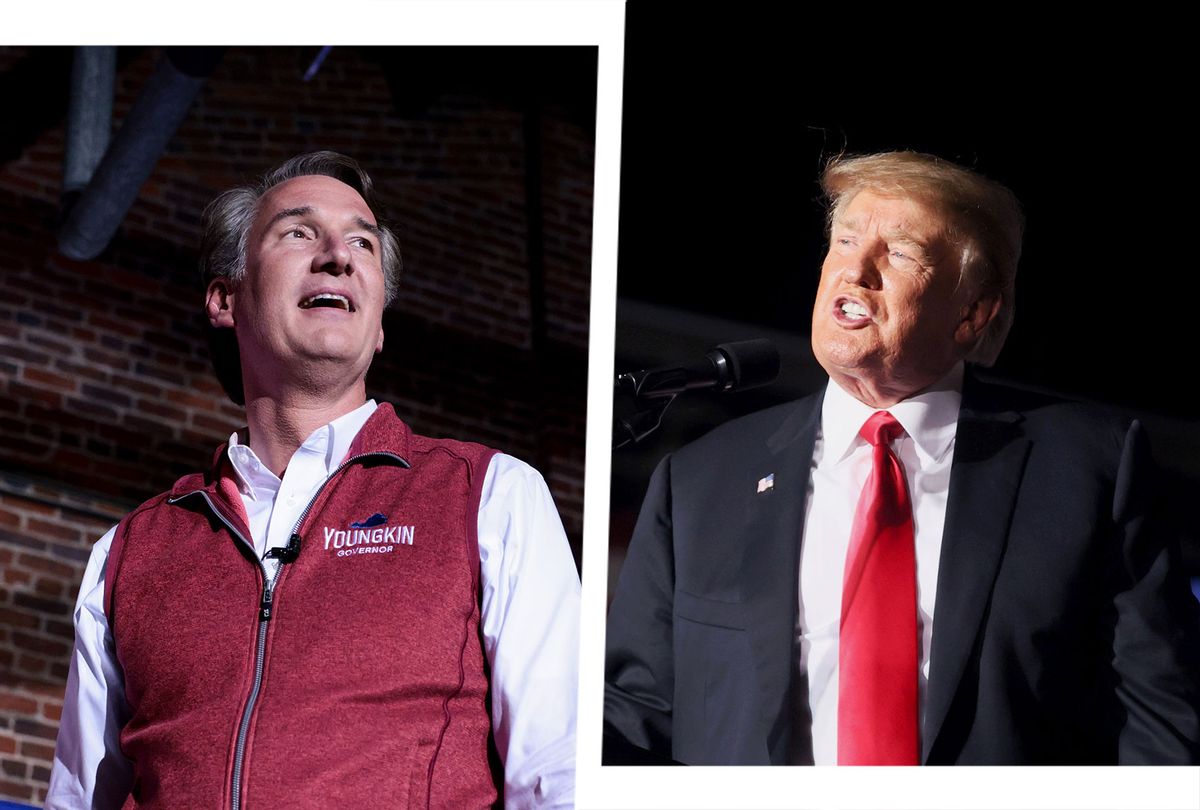 President Joe Biden on Tuesday called out Virginia Republican gubernatorial candidate Glenn Youngkin for trying to distance himself from former President Donald Trump in his bid to win the increasingly blue state.

Youngkin has tried to walk a fine line in his race against Democrat Terry McAuliffe, hoping to avoid alienating both the Trump base that he needs to turn out on Election Day and independent and suburban voters who view the former president far less favorably. The former private equity executive has not campaigned with Trump and at one point even seemingly sought to tie McAuliffe, a former Virginia governor, to the ex-president, prompting Trump to reassert his "complete and total" endorsement for Youngkin's campaign.

"Terry's opponent has made all of his private pledges of loyalty to Donald Trump. But what is really interesting to me is he won't stand next to Donald Trump now that the campaign is on," Biden said during a McAuliffe rally in Arlington. "Think about it. He won't allow Donald Trump to campaign with him in this state… He is willing to pledge his loyalty to Trump in private, why not in public? What is he trying to hide? Is there a problem with Trump being here? Is he embarrassed?"

During the Republican primary campaign, Youngkin refused to acknowledge Biden's election victory and has called for a voting machine "audit," an apparent signal toward Trump's false claims of fraud — especially since Virginia conducts such audits on a regular basis. Biden on Tuesday argued that Youngkin has "embraced" Trump's "big lie."

"I ran against Donald Trump. And Terry is running against an acolyte of Donald Trump," Biden said. "Terry's opponent doesn't like to talk about him very much now, but to win the Republican nomination, he embraced Donald Trump. He started his campaign by saying that the No. 1 issue in the race was… election integrity. Now, why did he do that? Because he wanted to hear Donald Trump? It was a price he'd have to pay for the nomination, and he paid it. But now, he doesn't want to talk about Trump anymore. Well, I do."

"Either [Youngkin] actually believes in the same conspiracy theories that resulted in a mob, or he doesn't believe it but he is willing to go along with it, to say or do anything to get elected," Obama said on Saturday. " And maybe that's worse ... because that says something about character."

Christian Martinez, a spokesperson for Youngkin, told NBC News that Obama's speech promoted "the fantasies of Terry and the left because they can't run on their failed record and radical vision for the future."

The McAuliffe campaign has seized on Youngkin's attempt to distance himself from Trump, who is widely unpopular in Virginia, where Biden won by 10 points last year and Democrats have dominated most recent statewide elections. McAuliffe, who previously served as the state's governor from 2014 to 2018, has offered to pay for Trump's travel expenses so the ex-president can campaign for Youngkin. Democrats have also sent out mailers touting Trump's endorsement of Youngkin.

But despite Biden's popularity in 2020, his approval in Virginia has slipped nine points from earlier this year to 48%, according to a recent Morning Consult poll. McAuliffe won his 2013 race by just two points, and polls currently show him with a very slim 1.5-point lead, according to FiveThirtyEight's polling average. (Virginia governors may not run for re-election, but a former governor is not barred from seeking the office again.)

Youngkin has largely focused the final days of the campaign on education amid widespread conservative panic over "critical race theory," calling for parents to dictate their children's school curriculum. McAuliffe fired back at a recent debate, arguing that parents should not be "telling schools what they should teach." Youngkin this week launched a new ad featuring a mother who tried to get Toni Morrison's Pulitzer Prize-winning 1987 novel "Beloved" banned from schools, claiming that her nearly college-aged son suffered from "night terrors" due to the book's graphic depiction of slavery. The state legislature twice passed bills that would allow parents to opt their children out of reading books with explicit content but McAuliffe vetoed both bills.

"We don't have time to be wasting on these phony trumped-up culture wars, this fake outrage that right-wing media peddles to juice their ratings," he said Saturday. "And the fact that he's willing to go along with it, instead of talking about serious problems that actually affect serious people. That's a shame."

Read more on Glenn Youngkin and the neck-and-neck Virginia race: