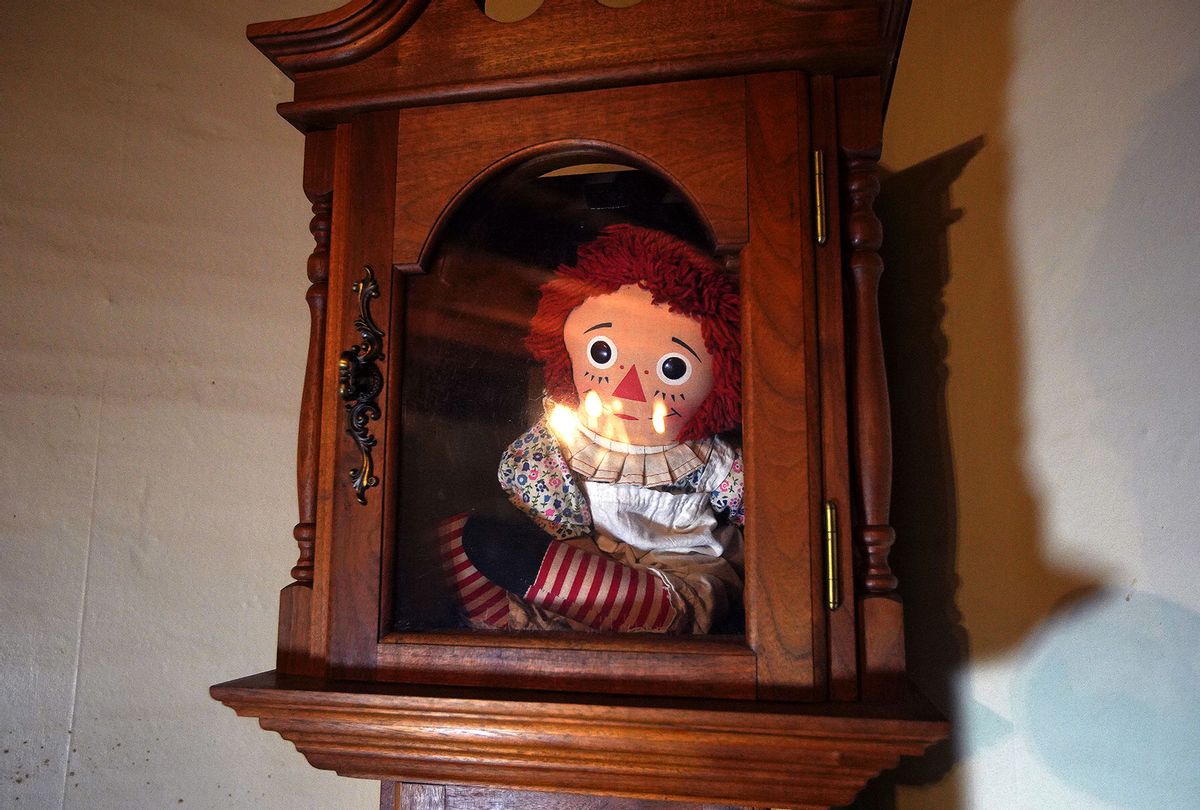 Watch enough horror movies like 1988's "Child's Play" or 2014's "Annabelle" and you'll come to the conclusion that a creepy-looking doll is something to be avoided at all costs. Dolls and their vaguely lifelike features are unsettling at best, possessed with vengeful spirits and homicidal at worst.

But films aren't the only place where dolls have been charged with paranormal abilities or general mischief. History has logged a number of tiny porcelain or stuffed playthings that have been said to be doing the devil's bidding. Here's a sampling of some tiny terrors.

"Twilight" fans will recall that the film series concluded with the birth of the offspring of fang-crossed lovers Bella and Edward. In "The Twilight Saga: Breaking Dawn — Part 1" (2011), their baby, Renesmee, was represented by some questionable CGI. On set, she was embodied by a very peculiar-looking animatronic doll (above). That prop is now being accused of malevolent sentience by people near the Forever Twilight display at the Chamber of Commerce in Forks, Washington, where the movies are set.

"One day she might be standing up straight, and the next, when you come in on another day, she's in a weird position," Lissy Andros, executive director of the Chamber of Commerce, told Jezebel in 2020. "It's like, isshe moving around in there? We don't know. But we tell everybody that the [display case] cover is on her for their protection."

Fortunately, Renesmee appears to be decomposing as a result of the fragile materials used to build her, so she likely won't be around to disturb people for too much longer.

This straw-stuffed moppet, with black eyes reminiscent of a shark's, can be seen at the Fort East Martello Museum in Key West, Florida — though why anyone would want to is a mystery. Robert's first owner was Robert Eugene Otto, whose grandfather bought the doll for his grandson in Germany as a gift. While residing with Otto, and with another owner after Otto's death in 1974, Robert was said to have appeared in windows, changed facial expressions, and played in the property's attic. Recently, visitors to the museum have claimed they've fallen into misfortune after "disrespecting" the doll.

Even souvenirs don't appear to be safe from Robert's influence: Musician Ozzy Osbourne once blamed his health issues on a replica Robert doll he purchased from the museum.

Made famous in a series of films spun off from "The Conjuring" franchise, Annabelle herself is no work of fiction. As reported by Ed and Lorraine Warren, the famous paranormal investigators portrayed by Patrick Wilson and Vera Farmiga, Annabelle was actually a Raggedy Ann doll (a red-haired rag doll introduced in 1915) who was given as a gift to an unnamed nurse in 1970. After settling in, Annabelle began to shift around on her bed, leak blood, and leave handwritten notes imploring the nurse to "help me" and "help us." According to Lorraine Warren, the nurse and her friends discovered that a young girl named Annabelle Higgins had died on the site of the apartment building they occupied when she was just 7 years old. The doll, then, was believed to be imbued with her spirit (the Warrens later determined the doll was being controlled by an "inhuman spirit" that was looking for a human host).

Now located at the Warrens' Occult Museum in Monroe, Connecticut, Annabelle has been blamed for a visitor's fatal motorcycle accident. The man apparently taunted her before driving off to his fate.

At the Quesnel and District Museum in Quesnel, British Columbia, Canada, visitors can come face to face with Mandy, a doll that so terrified her original owner that she was given up. As the story goes, Lisa Sorensen was given Mereanda, or Mandy, by her grandmother. Believing the doll was sinister, Sorensen gave it to the museum in 1991. Today, museum employees believe Mandy can follow them with her eyes, a possible result of having three-dimensional eye sockets that give the appearance of movement; attempts to record her have resulted in malfunctioning equipment.

Visitors to Mannenji Temple in Hokkaido, Japan, are welcome to gaze upon Okiku, but no photography is allowed. As legend has it, the doll was originally purchased in 1918 by Eikichi Suzuki to give to his sister, Kikuko. The doll had a short haircut. When Kikuko tragically passed away the following year, Okiku's hair began to grow out. When the family moved away in 1938, they gave Okiku to monks at the temple. Today, her hair is nearly down to her knees. Some observers also report that a close inspection of Okiku's mouth reveals erupting teeth.

6. Island of the Dolls

Adventurous tourists near Mexico City can make a stop 17 miles south at La Isla de las Muñecas (Island of the Dolls), a tiny floating garden which is populated primarily by creepy dolls of every type. Local lore has it that the island's caretaker, Don Julian Santana Barrera, once came across a young girl who had drowned (though some say he simply imagined her), then found a doll in the water he believed to have been owned by the girl. In tribute, he placed the doll on a tree and added more to begin a collection that grew until Barrera was found drowned in the same spot in 2001. Today, the property is awash in dolls in various stages of creepy disrepair, with some visitors believing the dolls are possessed.

Fans of the animated hit "Frozen" (2013) know Elsa, the forlorn princess whose powers have relegated her to an endless winter. For a Houston family, buying an Elsa doll apparently relegated them to endless problems. The Madonias claimed that the mass-market doll inexplicably switched between English and Spanish voices, even when it was turned off. After throwing it away, Elsa inexplicably returned to the family home. The family stuffed the doll in two garbage bags and discarded it . . .  but Elsa returned a second time, none the worse for the wear. The family then mailed Elsa to a friend in Minnesota, where she appears to be content. For now