The app was meant to help trans youth find healthcare. Now anti-trans activists are using it to find the physicians 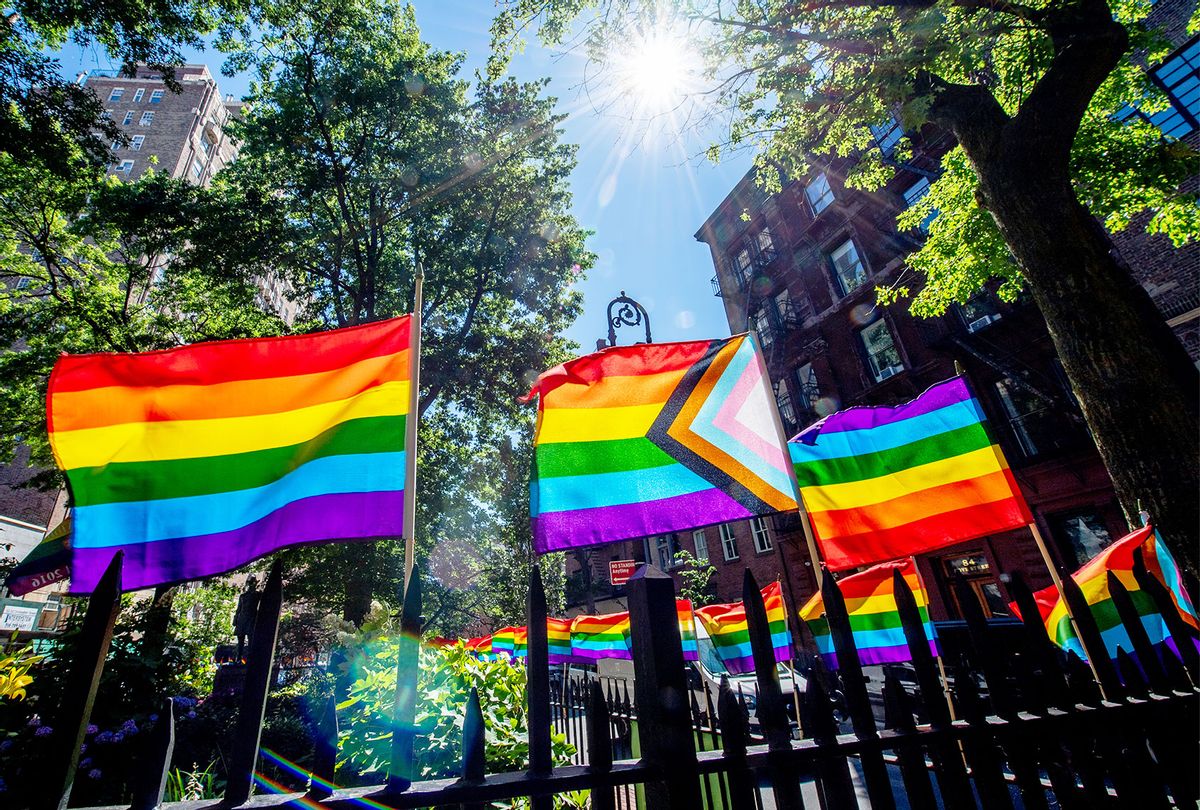 As early as thirteen years old, Erin Reed knew about transitioning. "The whole process just seemed really daunting," she explained to Rewire News. To access hormone replacement therapy (HRT), Reed would have had to present as a girl for several months in order to prove her gender to specialists. Those specialists would then track her apparent progress, effectively gatekeeping access to treatment until she presented "adequately." So Reed chose not to go down that road.

"Informed consent clinics" are specialized health centers that apprise trans patients of the risks associated with HRT without posing the barriers often imposed upon teens like Reed. Through word of mouth, Reed landed on a Planned Parenthood in Pottstown, Pennsylvania, roughly three hours from where she lived in Washington, D.C. But still, she told Salon, the process of finding the right clinic felt like grasping at straws, mostly because there was no centralized source of information for people in her position.

"It doesn't live consolidated in a single place," Reed, now a trans rights activist, explained in an interview. Each clinic, she said, has its own quirks that can throw patients for a loop. "There was one in Wyoming where they tended to turn people away if they didn't show up dressed up in a skirt."

Though Reed eventually found the treatment she needed, she learned from the arduous process that there's a need for such a resource for people seeking gender-affirming care — so she took it upon herself to build one. With the help of countless Reddit threads and testimonials from dozens of people nationwide, Reed created a comprehensive Google Map cataloging 786 informed consent clinics throughout the country. Her inbox was soon flooded with thank-you notes.

Then in February, Reed learned of The Gender Mapping Project (or "The Gender Mapper"), an anti-trans website that claims to serve as an "educational resource for anyone who has been affected by the gender industry." The organization, which works toward "abolishing pediatric gender transition," had put together a Google Map similarly cataloging clinics for trans youths and informed consent clinics. And it didn't take much digging to realize that The Gender Mapper had replicated her own data, Reed said.

"I instantly recognized it. I'm like, Wait a second. All of these spots that are pointed on here are all the spots that I researched," Reed said, pointing out that even her own notes and typos had been copied verbatim.

Reed shortly sent Google a notice of potential copyright infringement, and The Gender Mapper was shortly taken down over a "violation of [Google's] Terms of Services and/or Policies," according to screenshots shared with Salon. But since then, a newer iteration The Gender Mapper has emerged, still hosting a map that ostensibly draws locations straight from Reed's.

Founder Alix Aharon has called any suggestion of plagiarism "ridiculous," telling Salon that she's only concerned with clinics that serve transgender youths – not informed consent clinics.

"When I was compiling the child gender map, I included the informed consent clinics for interest only, which I found on a public Reddit page," Aharon told Salon in an email exchange. "My map is subject to interpretation, I don't express an opinion on the actual map, if someone thinks that child gender clinics are a wonderful thing then my map is simply a resource for treatment."

Though its origin remains somewhat dubious, The Gender Mapper has proven a very useful resource for anti-trans activists, Reed said. In fact, over the past several years, many trans-exclusionary groups have used it to stage public demonstrations against clinics and doctors who administer HRT and perform gender-affirming surgeries for teens struggling with their gender identities – an area of evergreen contention that has in recent years become politically supercharged.

Earlier this month, three clinics were targeted in New York City, Seattle, and Los Angeles, with protesters specifically calling out the work of plastic surgeon Dr. Rachel Bluebond-Langer of NYU Langone and pediatrician Dr. Johanna Olson-Kennedy of Children's Hospital of Los Angeles, as reported by trans journalist Ky Schevers. In New York City, the demonstrations were organized by activist K. Yang, who uses the online moniker "The Deprogrammer." Yang runs social media pages "advocating for an end to worldwide experimental intervention of children's healthy and normal puberty with so-called 'puberty blockers,'" she told Salon over email. "Transgender ideology," she said, conflates notions of sex and gender, and teaches dysphoric children that "there is something wrong with their sexed bodies instead of helping them to identify that we live in a patriarchal world."

Also in attendance was the TERF Collective, a 405-member "syndicate of [gender-critical] and [radical feminists] working to end the international campaign of female erasure." TERFS – a term first coined in 2008 – are widely known for espousing the notion that trans women should not be conferred women's privileges because they are not "real" women.

Asked about the group's moral impetus, TERF Collective founder Jesika Gonzalez echoed Yang's concerns over email, stating plainly that the group "does not believe in the concept of 'trans'".

"We seek to draw the public's attention to the fact that despite the prevailing legal fiction, children actually cannot consent," Gonzalez said. "They genuinely do not have the mental faculties or life experience to appreciate all they are taking on."

When it comes to demonstrating, trans-exclusionary groups have been known to employ protest tactics similar to the anti-abortion movement, noted Easther Wang in The New Republic. Trans activist Julia Serano told Salon over email that the protests seemed "reminiscent of past anti-abortion activist tactics centered on targeting doctors and clinics, with the intent of intimidating both providers and clients alike."

In New York, protesters held up signs that featured post-op pictures of patients, imagery ostensibly designed to accost the average passerby, harkening back to the oft-used images of both live and dead fetuses weaponized by anti-abortion demonstrators.

Over email, Yang said it was "inaccurate" to claim any similarity between the TERF Collective's protest tactics and those of anti-abortion activists, largely because her group "advocate[s] on behalf of female reproductive control and autonomy" by protecting young girls against practices like "female genital mutilation."

In recent years, the debate around trans youth identity has grown particularly acrimonious, as an increasing number of public figures – like British author J. K. Rowling, Wall Street Journal writer Abigail Shrier, and comedian Dave Chapell – have come forward to criticize the transgender rights movement. Many have broadly argued that the movement preys on young people by creating a social environment where they feel pressured to make permanent changes to their bodies that they might regret later on in life.

The debate rose to an international level last year when British 23-year-old Keira Bell filed a lawsuit against the NHS Gender Identity Development Service over the agency's apparent failure to provide enough guidance on her female-to-male transition. Bell, who was prescribed puberty blockers at sixteen, argued that the NHS should have done more to "challenge" her desire for treatment, which she later came to regret. Though a high court for England and Wales ruled in December that children sixteen and older can consent to receive puberty blockers, the case has since been held up by trans-exclusionary activists as a cautionary tale for dysphoric children and their parents.

As of late, there has been a sudden uptick in coverage of people who choose to "detransition" (i.e., stop or reverse their transition). But trans activists say that the disproportionate coverage has fueled a media narrative that bears little resemblance to reality, according to NBC News. In a 2015 survey of nearly 28,000 people who underwent a transition, the National Center for Transgender Equality found that just 8% of the study's respondents reported detransitioning, with 62% of that group having detransitioned temporarily. A number of other studies have found that this number to be lower than 8%.

"We have a lot of evidence that shows that for people who are transgender or gender diverse, starting a hormone that causes physical changes that aligns with their gender identity can improve their mental health," Dr. Juanita Kay Hodax, Interim Clinical Director at Seattle Children's Hospital, told Salon in an interview. "And so by forcing them to wait…they can have worsening mental health effects."

Hodax, a pediatric endocrinologist who helps children navigate their transitions, said that there is "a lot of misinformation" surrounding her line of work. For instance, puberty blockers are often erroneously claimed by critics to have irreversible effects on children, when the science strongly suggests otherwise. In fact, it's pubertal bodily changes that are permanent, generally making it far more difficult to transition if one chooses to do after finishing puberty.

There is also a lot of misinformation concerning how transition decisions are made in the first place, Hodax said. Trans-exclusionary activists tend to paint child transitions as "experimentations" carried out through medical coercion – a misconception that has this year fueled a tidal wave of GOP-backed legislation targeting trans youth in southern states. In April and May, Texas and Arkansas respectively banned the use of HRT and puberty blockers for children. Dozens of other states have floated similar measures casting minors as the hapless victims of an abusive medical system taken captive by the radical left.

But most of the time, "the patient has been talking to family members about gender for at least several months, if not, a year," Hodax said. "During the clinic appointments, we spend a lot of time discussing the benefits and risks of the medications that we're using. We talk a lot with patients about their goals."

Ultimately, transition regret is very real in some cases, Hodax said, and like many elective procedures, mistakes are made.