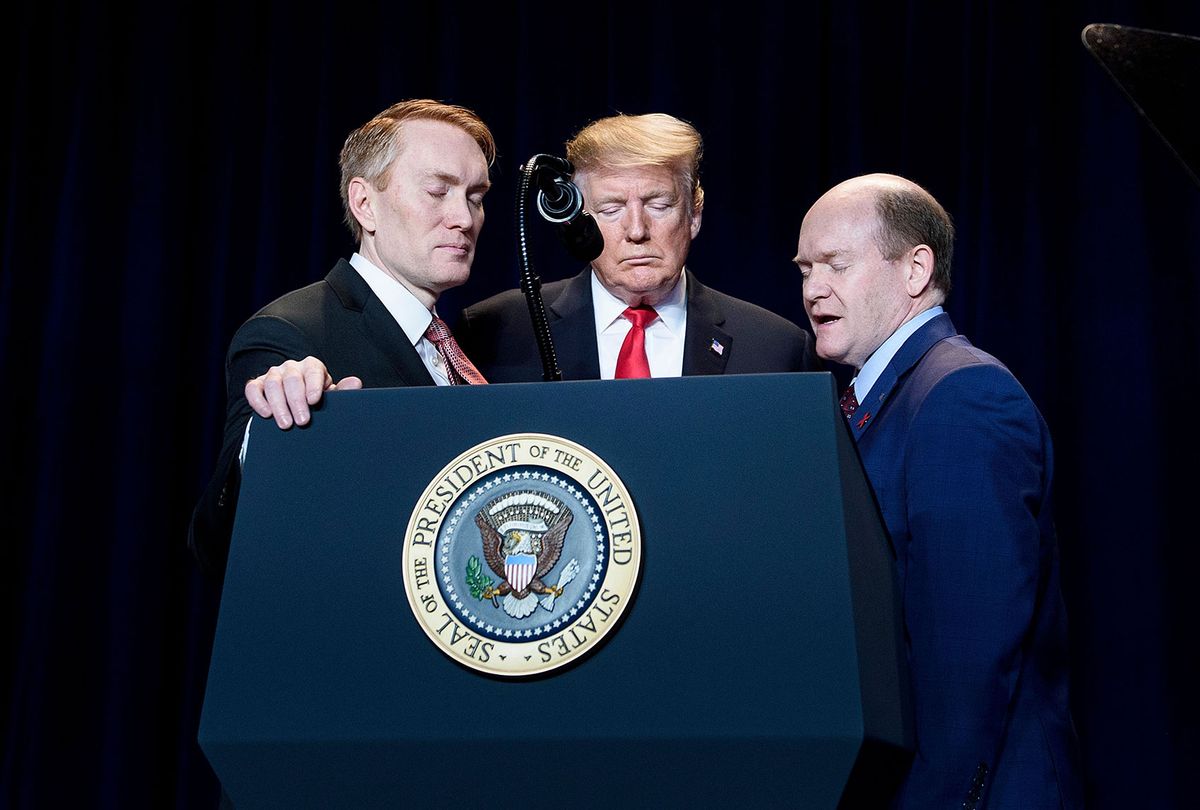 US Senator James Lankford (L) and US President Donald Trump (C) listen as US Senator Christopher Coons says a prayer during the National Prayer Breakfast on February 7, 2019 in Washington, DC. (BRENDAN SMIALOWSKI/AFP via Getty Images)
--

One of the nation's largest secular organizations is calling on members of Congress to stop participating in the National Prayer Breakfast, describing it as "a pay-to-play political event with a troubling history."

The Freedom From Religion Foundation (FFRF) sent letters Thursday to members of Congress who were part of the breakfast host committee this year, asking them to end their involvement. The FFRF said it is also asking members to contact their representatives and do the same.

In comments to TYT, the FFRF connected their concerns about the breakfast to the Jan. 6 attack on the Capitol, saying the attack raised awareness about "the dangers of Christian Nationalism."

As TYT has reported, based on internal breakfast documents, the event skews overwhelmingly toward evangelical Republicans. Congressional allies of The Family describe the event as one of reconciliation, but there are precious few non-allies with whom to reconcile.

LGBTQ people and advocates for reproductive rights are almost nonexistent at the National Prayer Breakfast. And even nationally famous religious leaders who don't adhere to Family ideology weren't invited in 2016.

RELATED: Bias, theocracy and lies: Inside the secretive organization behind the National Prayer Breakfast

A source close to The Family told TYT that the group would love to have more liberals attend, but the invitations are generated via the relationships of individual insiders, and The Family is dominated by right-wing Protestants. There's no evidence that participating Democratic politicians, from the president on down, make any effort to ensure equal representation at the event.

A handful of notable Democrats — who ostensibly support the separation of church and state, as well as LGBTQ and reproductive rights — routinely lend their names to the annual breakfast. The 2021 NPB host committee included five Democratic senators: Tom Carper of Delaware, Kirsten Gillibrand of New York, Tim Kaine of Virginia, Amy Klobuchar of Minnesota and Joe Manchin of West Virginia. There were also five Democratic House members: Charlie Crist and Val Demings of Florida, Debbie Dingell of Michigan, Lisa Blunt Rochester of Delaware and Juan Vargas of California.

Just days before the 2021 breakfast, TYT reported that a number of Family leaders were supporting Republicans backing false election-fraud claims. A spokesman for Rep. Crist responded, "The issues raised by this reporting deserve attention and answers," adding, "It would be very sad and disappointing if the organization were to fall into the hyper-partisan trap that's engulfed our national politics — to our nation's severe detriment." President Biden and House Speaker Nancy Pelosi participated in the event anyway.

FFRF's opposition to congressional involvement is based on both longstanding concerns about corruption and constitutionality, but also more recent reporting revealing a pattern of anti-LGBTQ activity.

Specifically, the FFRF cites the following "serious issues" with the breakfast: Its ties to international dictators, its promotion of anti-LGBTQ policy, its financial support from evangelical leader Franklin Graham, its role in elevating MyPillow CEO and election-fraud "truther" Mike Lindell, the breakfast networking by Russian operative Maria Butina, participation by anti-LGBTQ foreign officials and the resulting opposition to the breakfast by LGBTQ advocacy organizations.

Based on internal breakfast records, TYT recently revealed that as many as two dozen anti-LGBTQ politicians and leaders were part of the Ukraine delegation to the 2016 National Prayer Breakfast, co-chaired by the above-mentioned Rep. Juan Vargas, a California Democrat. In response, the EU organization Forbidden Colours warned members of Congress that prayer breakfasts are being used to build anti-LGBTQ, far-right networks. Two Democrats on the host committee that year told TYT they were not involved in making up the guest list.

TYT also reported that some Family insiders were involved in the political and religious radicalization of Mike Lindell, and that the breakfast played a key role. Lindell himself has cited the impact of Senate chaplain Barry Black's remarks at the event.

After his purported epiphany at the 2016 breakfast, Lindell went on to become perhaps the leading figure spreading Donald Trump's false claims that President Biden had stolen the 2020 election. Numerous Family leaders got on board with that lie almost immediately after Election Day.

Asked whether FFRF had anything to say to Republicans who agree with The Family's goals, FFRF director of strategic response Andrew Seidel said, "We'd hope that every American could agree that influence-peddling and allowing Russian operatives easy access to Congress is, at the very least, unwise."

Addressing Democrats specifically, Seidel said, "There are hundreds of houses of worship within walking distance of the Capitol. Members of Congress can enjoy fellowship, bonhomie and prayer without associating with this troubling group and without abusing the power attached to their public office to endorse a private religious event." He added, "Public, performative Christianity that disrespects the Constitution is unnecessary."

As FFRF co-president Annie Laurie Gaylor said in a news release, "Year after year, scandal after scandal, and still not a single prayer has been answered. All they're proving is that they don't respect the separation of state and church and that their god doesn't give a fig for their mimosa-driven pleas."

Seidel noted that the FFRF has pushed back against the breakfast for years, but said two things are different now.

"First, people are beginning to wake up to the dangers of Christian nationalism. Jan. 6 showed us how violent and dangerous mixing religion and politics can be," Seidel said. "Second, new records and reporting are exposing the shadowy, secretive nature of the agents behind this event. More and more information is trickling out, and all of it is damning. Smart politicians ought to look at that steady flow and wonder, 'What's next?' Because it's not going to be good. The smart thing to do is to sever ties with the organization."

Asked about the role the breakfast might play in the rise of Christian nationalism, Seidel called it "a major concern" and said the FFRF is investigating. "At the very least, Christian nationalists are able to point to events like this, officially sponsored by members of Congress, and their fallacious belief that America is a Christian nation is validated from the highest levels. Official congressional sponsorship of this event reinforces the myths that make up the Christian nationalist identity. That's a serious problem."

More from TYT and Salon on "The Family" and the National Prayer Breakfast: