The absolute best way to make chewy cookies, according to so many tests

Columnist Ella Quittner is on the hunt for the chewiest cookie 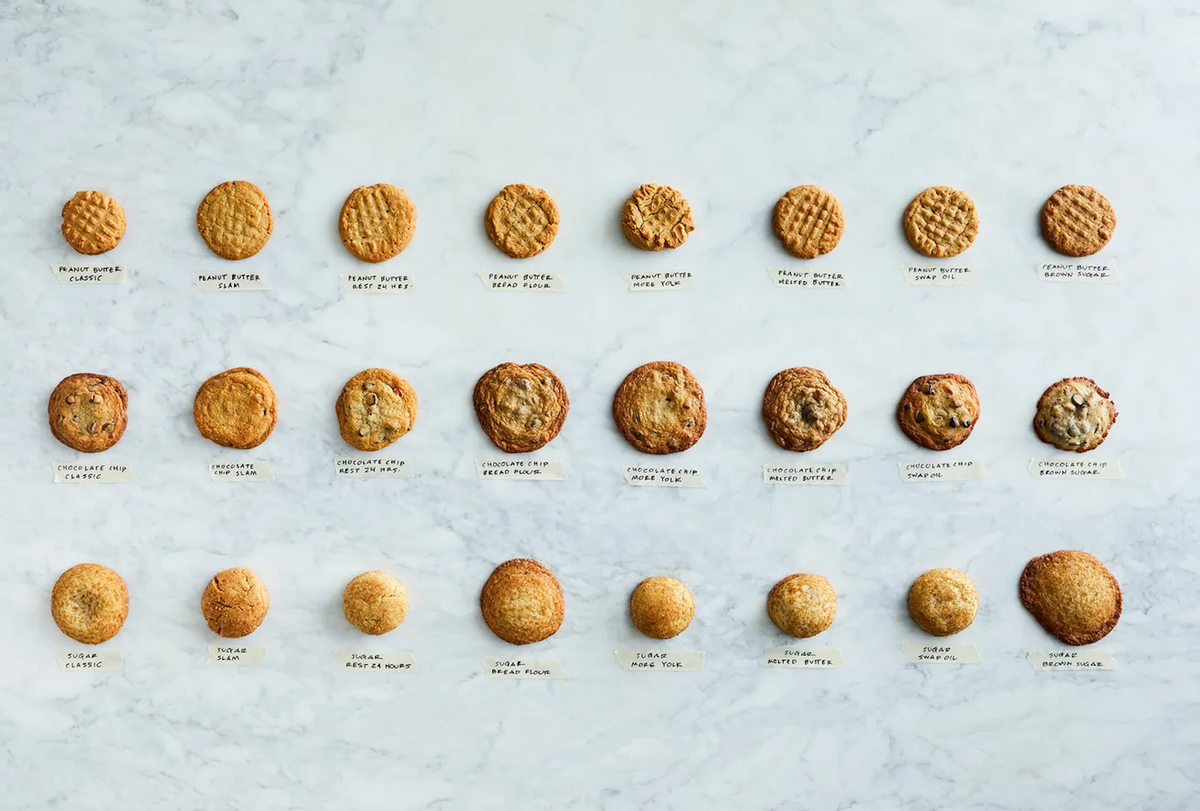 In Absolute Best Tests, our writer Ella Quittner destroys the sanctity of her home kitchen in the name of the truth. She's mashed dozens of potatoes, seared more porterhouse steaks than she cares to recall, and tasted enough types of bacon to concern a cardiologist. Today, she tackles cookies.

It recently came to my attention that there is no consensus on the definition of "chewy" among the people I count on for taste-testing. Unfortunately, this happened to coincide with the afternoon I asked those exact people to rank that exact characteristic across 24 batches of cookies.

"Chewy!" said my mom, biting into a sugar cookie a few Saturdays ago. "Just like a scone."

No, that wasn't right.

"Oh, I think this one is the chewiest," said my dad, waving around a chocolate chip. "It's like Tate's."

"Chewy?" asked my boyfriend Nate, biting into a peanut butter cookie. "You mean like a piece of cake?"

Accordingly, I had to take on all of the tasting for this installment of Absolute Best Tests, which was both an overwhelming task and a total dream. I have eaten so many cookies in the past few weeks that I am now one giant cookie. I can't imagine going back to normal life. I am so high on sugar! Ha ha ha! Here, touch my chips!

Now feels like as good a time as any to offer my understanding of chewy: requiring a bit of force to bite through. Like rigatoni cooked al dente. Or mochi. Or gummies. Or udon. Or boba. A little something to keep my teeth occupied. Octopus is chewier than chicken. A bagel is chewier than white bread. A scone is not chewy, unless something has gone horribly wrong.

A perfect chocolate chip cookie, however, should be chewy. As should a peanut butter cookie, and a sugar cookie. In an ideal world, each would have tender, crisp, buttery edges, and a dense, slightly underbaked, fudgy center. The "Saturn's ring" region — that's what we Cookies call the space in between our edges and our centers — should be distinctly chewy, a clenched tightness that elicits some mastication.

What follows is my mad attempt to produce precisely that.

As a jumping-off point for my foray into chew-enhancement, I used three popular recipes on Food52:

Since I was mainly making tweaks to increase moisture, I popped each of the doughs into the freezer for 20 minutes before baking, to help the cookies retain their shape. I also used the same standard supermarket brands of ingredients for each recipe, and a kitchen scale.

It should be noted that each master recipe produced at least a slightly chewy specimen to begin with. The chocolate chip cookie was more Toll House than Entenmann's. The peanut butter cookie was the crumbliest of the three with just a bit of bend, very "Grandma's house" (if my grandma had ever learned to bake instead of parking me in front of Jaws reruns while she played bridge and ate cabbage soup). And the sugar cookie was plump and didn't spread much, a little dome of dense dough.

Variation: Halfway through the bake time, remove the sheet pan from the oven and slam it on the counter. Return to the oven and keep baking according to the instructions.

Pan-banging mostly entered the recipe-world lexicon around 2017, when Sarah Keiffer's big crinkly boys went viral on Instagram. It's a technique I've been employing — albeit in a much lazier fashion — since I first learned to make cookies, as my father has long been appalled by any amount of cakiness or puff in a CCC. I applied my lazy version of the technique to each recipe: a one-time double slam of the cookie tray atop a counter midway through baking to deflate them.

Across each type of cookie (chocolate chip, peanut butter, and sugar), this tweak produced materially chewier cookies. It worked even better when, in some trials, I remembered to slam the pan against the counter at the end of the bake as well. Lacy-crisp edges were an added benefit.

Variation: Before baking the dough, cover and let rest in the refrigerator for 24 hours.

For this trial, I simply used the master dough recipes (chocolate chip, peanut butter, and sugar) and let each one sit covered in the refrigerator for 24 hours. According to Bon Appétit: "The primary reason for a brief resting period is to redistribute the liquid in the dough… With less 'free moisture' hanging around, the dough has a higher concentration of sugar, and the higher this percentage, the more likely it is that you'll get cookies with chewy centers and crispy edges."

While resting my doughs did not make any cookie chewier — in fact, it resulted in a softer, plusher texture across the board — the tweak did result in markedly better-tasting cookies. Even my sorta useless but very lovely taste-testers agreed with that. The cookies spread less, and they did have more even browning and texture as well.

Variation: Swap half of the all-purpose flour for bread flour.

Bread flour contains more protein than all-purpose flour, and, as King Arthur explains, "The higher the protein content in a flour, the more gluten there is to develop when water is added. The more that gluten develops, the stronger the dough." So I had hoped that swapping out half of the all-purpose flour in each recipe for bread flour would yield substantially chewier cookies.

That was the case only for the chocolate chip cookies. The bread flour batches were consistently thicker across all types (chocolate chip, peanut butter, and sugar), but for the peanut butter and sugar cookies, the thickness was softer than the master recipes. My little sister Clem also claimed that this tweak made each batch of cookies taste "just like bread" and screamed in disgust each time she took a bite, but no one else commented on flavor.

In his guide to the Food Lab's perfect CCC, J. Kenji López-Alt writes, "Egg yolks also provide some moisture and protein, but more importantly they provide a well-emulsified source of fat. When cooked, egg yolk forms a tender protein coagulum that can keep cookies tender and fudge-like. A high proportion of egg yolk leads to a more brownie-like texture in a finished cookie."

For the yolk-centric trials, I took the total amount of egg in each recipe and cut the amount of egg white called for in half. Then, I doubled the amount of yolk in the recipe. And holy hell, did things get crazy!!!! Each of the doughs (chocolate chip, peanut butter, and sugar) were dry and crumbly, due to the reduction in overall egg — an egg white weighs 35 grams, while a yolk weighs just 14. But the baked cookies were (puzzlingly) more like macarons than anything else, with dry shells and extremely wet, tender insides. I cannot stress enough that these cookies looked unappealing fresh from the oven, domed and craggy like something an unpopular neighbor might bring to a potluck, until we broke them in two to reveal their extremely moist interior. Unfortunately, my sister's friend Sander took a bite of a yolk-trial chocolate chip cookie, then exclaimed, "Mmmm, I like 'em juicy."

None of the cookies were chewier — if anything, the wet insides were a little tacky. They were soft and pliable and bonkers, with a custardy flavor. The peanut butter cookies were especially delicious. The sugar cookies were almost gooey in the centers.

Variation: Start the recipe with melted (but not hot) butter, and skip the creaming step. Instead, use a whisk to combine the melted butter with the sugar, then proceed with the recipe.

When I swapped melted butter in for creamed (aerated room-temperature butter), each batch of cookies (chocolate chip, peanut butter, and sugar) was noticeably denser, with more spread and more chew. The peanut butter cookies could practically be bent end to end without breaking. The sugar cookies were simply denser, which "read" like chewiness (my mouth can read). The chocolate chip cookies were the least pliable of the three, but were a touch chewier than the classic batch, and they had a markedly richer, more velvety internal texture. All three doughs were also wetter-seeming, and needed an extra half-hour or so to chill and firm up before scooping.

Variation: Swap an equal volume of vegetable oil for half of the butter called for in a recipe.

In Cookie Genius Jesse Szewczyk's guide to the perfect chocolate chip cookie, he suggests using a 50-50 mixture of vegetable oil and butter to achieve "soft, chewy texture with beautiful cracks."

I couldn't discern much extra chew in the chocolate chip cookies or in the sugar cookies, though I did notice a muted flavor in both. For some reason, the reduced butter led to the vanilla and salt coming through less.

Variation: By weight, swap half the amount of white sugar for additional light brown sugar.

Per the Bob's Red Mill blog (!! hi Bob), "Cookies that are dense and chewy incorporate more moisture into the batter. This can be achieved by making substitutions with ingredients, or even just changing the way you incorporate certain ingredients. Plus, your particular baking technique and your method of storing cookies can also play a role."

Brown sugar has more moisture than granulated sugar, so I swapped half the granulated white sugar in each recipe with additional brown sugar. The results differed: The sugar cookies were much chewier with a higher proportion of brown sugar — especially a full day after baking — but they spread to a point of near unreliability, so for future batches, I will tweak the proportion to be a bit less. The chocolate chip cookies were thinner but a bit chewier after cooling, though they were paler and looked softer when they came out of the oven. But the peanut butter cookies were actually pillowy, and less chewy. All three batches were so delicious, though, that I would recommend you make this tweak no matter what.

Here are the three master recipes, tweaked to include the tricks that worked best in my tests.