After defeat in Virginia, Democrats — and America — face a dangerous inflection point

Democrats shouldn't overreact, but the lessons are clear: Stay out of culture-war fights and focus on reality 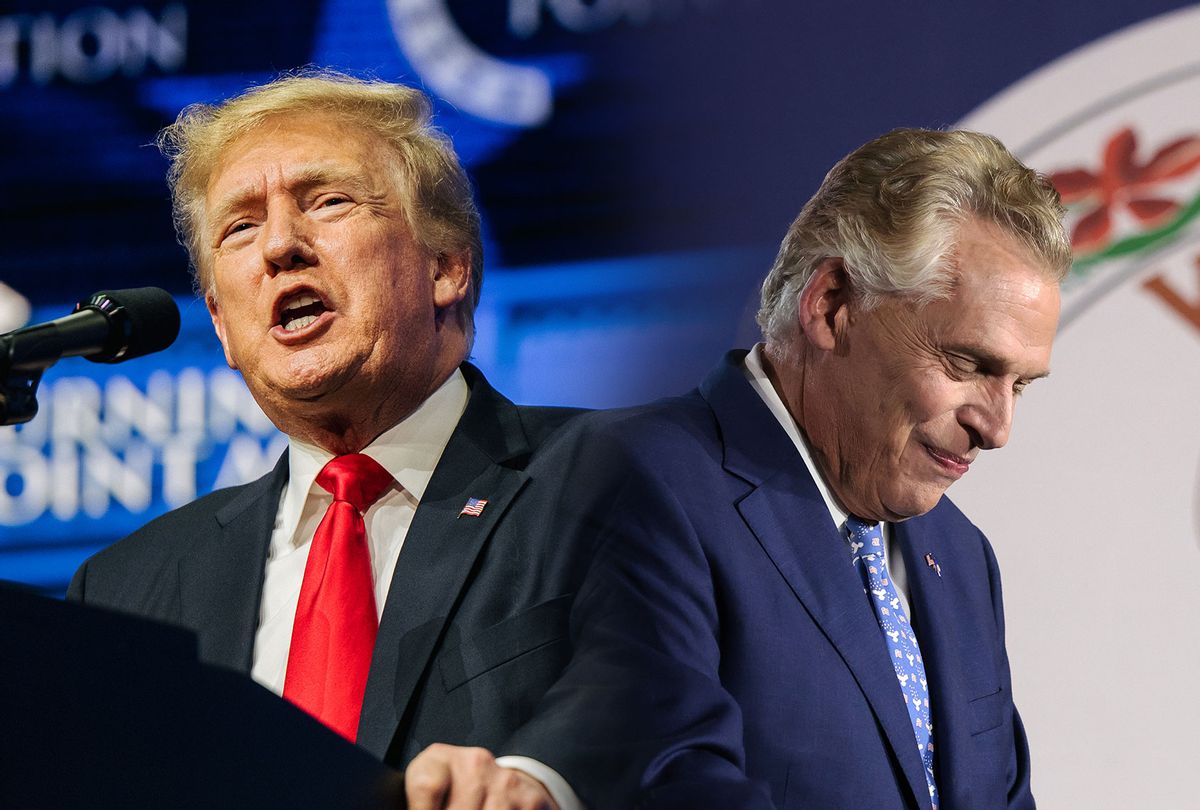 Those screams you hear resembling a wailing banshee are coming from Democrats. They're convinced the world has come to an end after Terry McAuliffe lost the governor's race in Virginia.

The snickers you hear are from the fascists who believe the Virginia election signals they are on their way to recapturing the former democracy of the United States in the name of their demented overlord, Donald Trump.

As Mary Trump said recently on my podcast "Just Ask the Question," the GOP is working hard to ensure that the minority rules, the rulebooks have all been thrown out and the world will be safe for fascism, courtesy of her uncle Donald. "That party needs to be burned to the ground," she told me.

Frankly, it looks like  Donald has already done that and instituted a new party dedicated to voter suppression, misogyny, racism and fascism.

In Virginia, that has also led to a Republican party, according to state legislator Danica Roem, populated by those who say the major issue facing voters is a bunch of "undocumented, transgender teenagers hanging out in bathrooms teaching each other critical race theory while they earn sharia law degrees."

Of course, no one was happier with the election results than Trump, who — unable to tweet his brain droppings on a whim — now issues "Press Statements" about them. Few media outlets  bother to publish his meandering, mind-numbing baloney, thus sparing the world considerable dyspepsia, tremors and death-metal rage. Trump, meanwhile, is as giddy as an eight-year-old huffing nitrous oxide as he sees his grand plan falling in place.

This grand plan includes winning state and local races, purging the GOP of Trump non-believers and instituting laws, rules and procedures that will enable Trump, or any other Republican, to win elections in 2022 and 2024, whether or not they actually get a majority of the vote.

"They have a limited window of opportunity," Mary Trump explained. "They know they're the minority party and they're desperate to hold on to power." If Republicans can rig the game, they're almost certain to pull off the feat. If they can't, then they won't.

But we are definitely at an inflection point in this country, and the Democrats have a narrow window to stop the Republicans from destroying what's left of our democracy. And it isn't just our country that will suffer if our democracy ceases to exist. That will lead to a downward spiral for the entire world.

The Democrats' wailing comes from the fact that they see Terry McAuliffe's loss as a harbinger of the apocalypse. "Usually we say that if we get the vote out, then we win, because there are more of us than them," Roem explained. "That didn't happen and we had a large voter turnout."

Virginia turned out more than 50 percent of the vote, but that still means a minority of registered voters elected their governor. It is anathema to democracy that we consider a voter turnout of 50 to 60 percent as terrific.

Anyway, McAuliffe's loss only portends disaster if the Democrats continue to run races the way McAuliffe did — very poorly. He was never the best Democratic candidate for governor, as former Gov. Doug Wilder said in 2020. High-ranking Democrats told me the same thing this week. "He sucked. He stunk," one prominent Virginia office-holder explained to me. "That's what doomed his campaign." Imagine how bad he had to be to lose to an accused racist and sexist.

The problem is that on a national scale, most Democrats from the top to the bottom are as ineffective as McAuliffe. "I have the best ideas and the other guy is a sexist, egotistical, lying, hypocritical bigot" means little in a world where truth often takes a backseat to fear-mongering, character assassination and conspiracy theories. The Democrats often don't hit us where we live, but hit us for not living where they think we should.

Roem found a different path. I've known her for a long time and once hired her as a city editor for a newspaper I ran. She not only won re-election as a Democrat, she won precincts that Terry McAuliffe lost.

She says that when she talked to some of those Northern Virginia voters who returned her to the House of Delegates, they said they thought the Democratic Party was filled with Satan-loving communists, but added, "They haven't got to Roem yet." Right-wing voters and swing voters who turned against the Democrat at the top of the ticket voted down-ticket for a liberal, thrash-metal-loving, transgender female musician, giving her a third term in Richmond.

That probably prompted Robert E. Lee to spin in his grave — which would be the most productive thing he ever did for his country, living or dead.

Roem got re-elected doing something too many Democrats (and Republicans) have conveniently forgotten; she works for her constituents. Roem first won election against a far-right Republican who denigrated her gender identity and ignored the issues. Roem didn't make a big deal out of who she was, but campaigned on what she could do, promising to take care of a traffic problem that has plagued Northern Virginia for years, and her predecessor had done nothing about.

She campaigned on public service and she won. She's won re-election as the state's first transgender female legislator by providing needed services. Her constituents have thought enough of her efforts to keep her in office — even if some of them don't like her.

That's the key to survival on a national scale for Democrats. The Republicans do not serve the public good. They prey upon the public with faux culture wars to retain power, while providing little to no service for the people they supposedly represent.

We suffered through four years of "Infrastructure Week" at the White House under Trump in which nothing was done. The GOP continues to try and thwart Biden's attempts to rebuild the nation's crumbling infrastructure. Health care, parental leave — all those things that an overwhelming majority of Americans support, the Republicans block. Senate Majority Leader Mitch McConnell has repeatedly said that his goal is to make a Democratic president fail. The GOP over the years has stood against social security, civil rights and every single progressive idea we now take for granted and value as Americans.

The GOP simply cannot govern. It gave up any pretense of governing to secure autocratic, fascist control in order to serve its billionaire overlords. Republicans preach that we should pull ourselves up by our bootstraps, but conveniently forget to mention that they often relied on student loans and government assistance to get where they are. Mary Trump is right about what needs to happen to that political party of fascists.

But the Democrats also continue to misunderstand the American people. You can call out the Republicans for their hatred and bigotry and that will appeal to your faithful — but if you truly want to convert voters, then be a Danica.

Tip O'Neill, the political heavyweight former speaker of the House, famously said, "All politics is local." So what can the national Democrats learn from a local legislative race in Northern Virginia?

Public service. The Democrats have to quit arguing about their righteousness and start hammering home their service to everyone — even the people who hate them. That makes a difference.

Yes, the McAuliffe defeat in Virginia is a wake-up call for the Democrats. But they shouldn't misinterpret what it really means. Mary Trump tweeted Wednesday, "We need to get angry" and followed it with "And CHANNEL our anger."

Former Republican congressman Joe Walsh said Wednesday, "As someone who used to actively practice in all this culture war stuff and understands it intimately, I think maybe I'll become a Democrat to help Democrats learn how to fight back against Republican fear mongering and thereby win the culture wars by actually persuading voters."

Exactly. Anger without action is pointless, and poor messaging is killing the Democrats. To succeed, they should stop telling us how righteous they are and start telling us what they've done, and what they intend to do. Don't just say it once: Beat that drum loudly, consistently and with renewed vigor and you can beat the Republicans. Every time they engage in character assassination, keep them on target. Democrats always end up playing the game by Republican rules, and they're bad at it. Furthermore, as Donald Trump has shown us, you can throw out the damn playbook and claim to be victim and victor in one breath — while never serving the American public and running a huge con on them the whole time.

You want to reach voters? "What have you done for me lately?" is the ultimate cry of the voters. The GOP cannot answer that question, so they convince their voters it's a culture war, or it's about conspiracy, victimization, immigration, socialism and destroying the American way of life — which is exactly what they're doing.

The Democrats fall on their own swords waging this idiotic culture war without realizing what they do better than the Republicans: It's about public service, stupid.