To beat back fascism, Democrats must harness the showbiz energy that helped win 2020

Pop culture figures played a major role in beating Donald Trump. Democrats may need them now more than ever 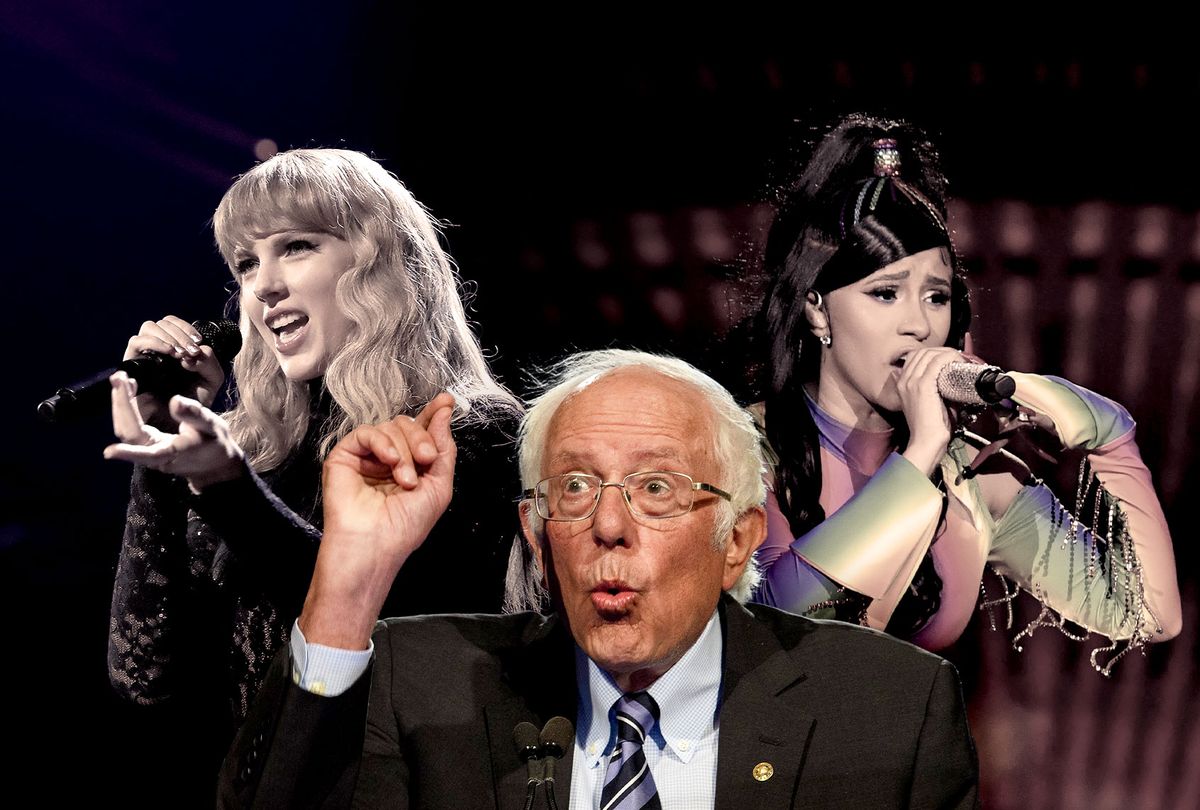 It was only a year ago that Donald Trump was defeated by Joe Biden by seven million votes. Yet many of the pundits and politicos who oppose Trumpism are gloomily quoting recent polls and reflecting on midterm disasters during recent Democratic administrations. That 2020 victory was helped by an unprecedented level of engagement by singers, actors, writers, directors and comedians. Although baby boomers like to romanticize the role of artists in the civil rights and antiwar movements of the '60s, in those days progressive energy was limited to the counterculture. In 2020, much of mainstream culture was deeply engaged in the resistance.

When Jon Stewart began hosting "The Daily Show" in 1999, he was the only late-night comedy host who addressed politics on a regular basis. After Trump's election, it was every such host, every night. Before Trump, most mass appeal pop artists were apolitical. After Trump, pop stars with tens of millions of fans like Taylor Swift were obsessively engaged. Cardi B's videos with Bernie Sanders and later with Joe Biden were seen by more viewers than nightly newscasts. A "table read" of "The Princess Bride" raised $7 million for the Wisconsin Democratic Party, its best grassroots fundraiser ever.

In the weeks before the election, Mandy Patinkin and his wife Kathryn Grody did 18 social media videos in support of Democrats; Sacha Baron Cohen's new "Borat" film eviscerated Rudy Giuliani; Ava DuVernay screened her film "Selma" at a California drive-in that was also set up for voter registration and reception of early ballots; Bruce Springsteen told the audience for his radio show, "In a few weeks we'll be throwing the bums out," and narrated one of Biden's final TV spots; Taylor Swift's song "Only the Young" was used in an anti-Trump ad that included scenes of Black Lives Matters protests; Bette Midler tweeted "Donald Trump is a parasite, a leech… Anyone supporting him is covered in shame"; and Bradley Cooper, Michael Keaton and Lady Gaga campaigned for Biden in the swing state of Pennsylvania.

In the past, artists were effective in adding saliency to issues marginalized by mainstream media, such as advocacy for LGBT rights in films like "Milk" and TV shows like "Modern Family" before same-sex marriage was legalized and the fight against racist policing, mostly in lyrics by hip-hop artists, during many years when most politicians avoided the subject. Yet there has often been skepticism about the political relevance of election activism from many Democratic pundits. In 2019, Chris Matthews fretted on MSNBC that many Trump voters felt that there had been "a great party going on with the liberal elite and their Hollywood buddies and they were left out of it." But most pop-culture stars come from working-class or middle-class backgrounds and from disparate parts of the country. Although elite art forms like classical music are primarily supported by cosmopolitan audiences, mass entertainment, by definition, is popular in all 50 states, as are the tabloids that cover celebrities.

Even among those politicos who admire popular culture, the question is often raised about whether political art or celebrity activism actually make any difference. There is certainly such a thing as "preaching to the choir," or repeating feel-good bromides to an audience that already agrees. In recent election cycles, however, the primary agenda of campaigns is to motivate maximum participation from those very audiences: "turning out the base." Performers who have their own tribal fan bases can motivate some reluctant voters and make a difference in close elections.

Another role some artists played in 2020 was to help reunite the center and the left. In 2016, third-party candidates from the Green and Libertarian parties got 5.7% of the popular vote, allowing a united right-wing minority to seize power. In 2020, aided by a large turnout and a huge margin among younger voters (many of whom trust artists more than politicians or the political media), Biden clawed back most of those votes. The marginal parties were reduced to 1.7% of the total, which is what gave him an Electoral College victory.

Republicans know who their enemies are. In 2020, Breitbart News had three writers assigned to a daily entertainment section that attacked show business progressives. When Joy Behar was asked if she was planning on retiring from "The View," she quipped that she couldn't "because it would cause unemployment at Breitbart."  Laura Ingraham of Fox News wrote an entire book ("Shut Up and Sing") that tried to delegitimize "liberal Hollywood."

Before casting his vote against impeachment, Rep. Ken Buck, a Colorado Republican, said that some who vandalized the Capitol and attacked police officers had been motivated by "the socialists in Hollywood … Robert De Niro said that he wanted to punch the president in the face. Madonna thought about blowing up the White House. Kathy Griffin held up a likeness of the president's beheaded head, and nothing was heard and nothing was said by my colleagues at that point in time." (As if holding up a Trump mask smeared with ketchup was in the same moral universe as violently trying to overturn a presidential election.)

One urgent need is for Democrats and their show business allies to educate their own base about the steepness of what poet Amanda Gorman described, at the Biden inauguration, as the "hill to climb." Another is to find ways to maintain progressive aspirations and acknowledge the suffering that status-quo policies cause, while acknowledging partial victories and maintaining clarity about the effect that a resurgence of Trumpism would have on millions of vulnerable people.

Most importantly, the coalition that defeated Trump in 2020 needs to project a moral imperative that transcends the 24-hour news cycle. Andrew Breitbart famously said that "politics is downstream from culture." In the libertarian cosmology of Ayn Rand and Donald Trump, the most important thing in life is to avoid being a loser. A contrasting philosophy can be found in the scene in "Casablanca" where Humphrey Bogart tells Ingrid Bergman, "It doesn't take much to see that the problems of three little people don't amount to a hill of beans in this crazy world," and in Bruce Springsteen's oft-repeated exhortation to his concert audiences: "Nobody wins unless everybody wins."

Most Americans do not watch TV news or read op-ed articles like this one. Republicans have right-wing talk radio, along with a set of social media algorithms and well-funded bloggers who help them spread their daily (and sometimes hourly) talking points to the masses.

The Democrats have the White House, but Biden is not a TV star like Trump was, and in any case he has a very full plate. Neither the president nor Democratic congressional leaders have personalities that can transcend political media and educate and motivate "low information" voters. Like politicians and pundits, the world of art and entertainment include characters with outsized portions of the seven deadly sins, but also those who can reach millions of voters who are impervious to conventional political sales pitches.

The right-wing echo chamber will try to gaslight Democrats into keeping populist messengers on the bench. They demonize AOC and Kamala Harris and "liberal Hollywood," in part to motivate their own base but also to gaslight Democrats.  The artists of the resistance of 2020 should fully re-engage, and they need to be coordinated with the Democrats even if they don't always agree with them. It's time to put the band back together.

More from Salon on the intersection of pop and politics:

Danny Goldberg is the author of the new book “Bloody Crossroads 2020: Art, Entertainment and Resistance to Trump.” His previous books include "How The Left Lost Teen Spirit," "Bumping Into Geniuses," "In Search of the Lost Chord: 1967 and the Hippie Idea" and "Serving the Servant: Remembering Kurt Cobain." He began his career in 1969 with Billboard, covering the Woodstock festival, and later wrote for Rolling Stone and Crawdaddy. He worked as a personal manager for Nirvana, Bonnie Raitt, the Allman Brothers Band and Sonic Youth, and was president of several major record companies. He is former chair of the ACLU of Southern California, serves on the board of Public Citizen and frequently writes about politics and culture for the Nation.