Meet the warty comb jelly, the only animal with a disappearing anus

Its anus appears and disappears every time it needs to poop, at least every hour. That’s just one of its oddities 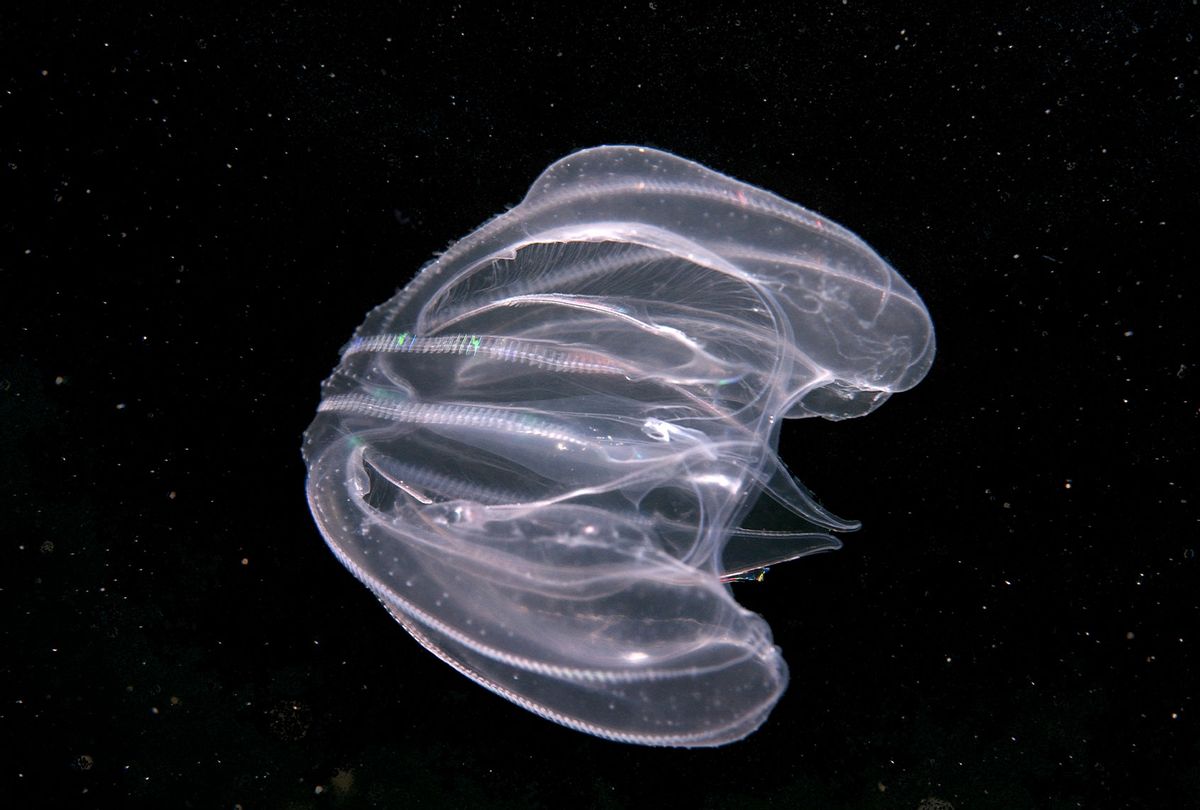 Staring at a comb jelly, it's not very obvious which end is mouth and which is butt.

A quick search of "comb jelly" shows how many of us get it wrong. We often depict comb jellies butt up (like the image for this article), though they tend to swim and rest mouth up. Comb jellies look so much like a marine bedsheet ghosts, it's understandable we'd assume the domed part is the mouth side instead of the butt.

If you keep watching a comb jelly, you may be able to tell which end is the butt, because you'll see it eat and you'll also see it poop. However, unless you have a microscope trained on the jelly's rear end, you wouldn't necessarily be aware of a vanishing act you just witnessed. A few years ago, researchers discovered that the warty comb jelly (Mnemiopsis leidyi) has a disappearing anus. Every time a warty comb jelly needs to poop, the outer skin and the digestive system fuse to form an opening. Then after the poop is completed, that nexus vanishes without a trace.

Making and unmaking an anus sounds like such an ordeal, you might imagine comb jellies poop rarely. However, comb jellies are constant consumers, and thus frequent poopers. Exactly how often the comb jelly poops scales with its body size. In a large adult comb jelly, the transient anus appears and disappears about every hour. The tiniest of comb jellies, only a fifth of a centimeter long, form and then reabsorb their anuses every 10 minutes. Still, even these tiny comb jellies spend most of their time without an anus. This vanishing act is fast. Appearing, pooping, and disappearing takes the anus just a few minutes.

The transient nature of the comb jelly anus was discovered in 2019 by Sidney L. Tamm at the Marine Biological Laboratory. However, we've known since 1850 that comb jellies have an anus, unlike many similar looking but not closely related species. Comb jellies are their own group separate from jellyfish, who have no anuses and thus poop out their mouths. An anus was in fact one of the key differences that led invertebrate zoologist Libbie Hyman to reclassify comb jellies as distinct from jellyfish in 1940, well before genome sequencing confirmed their evolutionary distance.

Comb jellies are the only creatures so far known to have transient anuses. Though if any organism was going to have one, it's not too surprising it's the comb jelly. Comb jellies are anatomical trailblazers. They have a nervous system and muscles, but theses systems have very different biology from all other animals. Comb jelly genetics even indicate that their neurons and muscles evolved entirely separately. So why wouldn't comb jellies have their own way to have a butt?

Comb jellies are also some of the most plastic organisms we know of. Cut a comb jelly in half and it can completely rebuild its body in just four days, not even leaving a scar behind. If being sliced in half is just an off week, creating and reabsorbing an anus dozens of times per day may not be such a big deal.

Though comb jellies are alone in having disappearing anuses, the invertebrate world is full of strange butts. The face mite, an arachnid that is exactly what it sounds like, has lost its butt. In its fleeting 16 day life, it feasts but never poops once. Some scorpions join the face mites as butt-less arachnids. Scorpions can drop their tails to escape being eaten, but woefully sacrifice their anuses in the process.

Among the other weird butts scuttling around the ocean, there are species that breathe through their anuses, including sea cucumbers, whose anuses are also homes for fish. The ocean's other strange symbiotic butt, or butts rather, belongs to the worm Ramisyllis multicaudata, which lives inside a sea sponge. With its head buried deep down in its host, the hundreds of butts of the worm's branching body poke out like a reverse hydra.

The disappearing anus is just one of many recent developments in our understanding of comb jelly biology. Marine biologists have studied wild comb jellies for centuries, but recently scientists have succeeded in growing comb jellies in the lab. Comb jellies are well on their way to becoming an exciting new research organism. Because they do everything so differently, studying comb jelly biology could help find creative solutions to human biological problems. And as comb jellies pop up in more labs around the world, we might also learn a little more about what it means to have a disappearing butt.