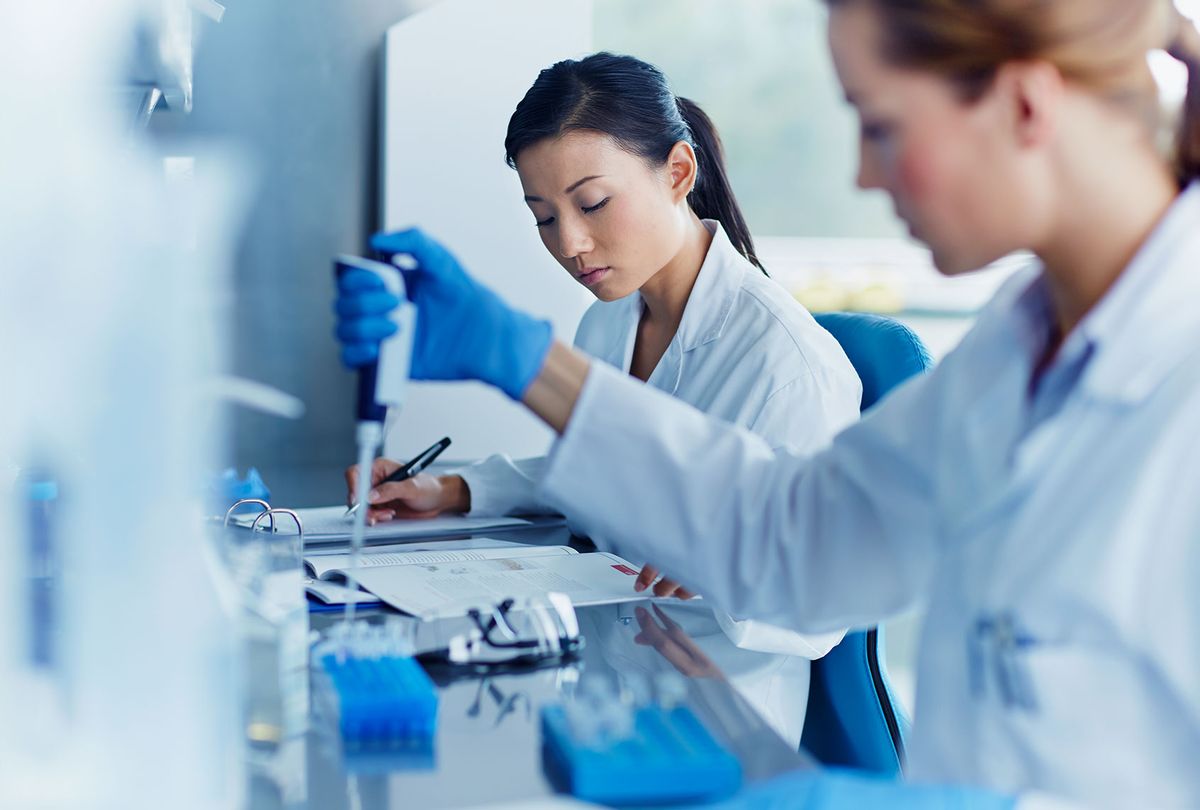 In 2013, Nicole "Nic" Johnson was pursuing her doctorate in counseling psychology and making the requisite rounds of academic conferences. "They were always very, sort of cold and nonpersonal," she said. "Very heady and ivory tower." But that perception changed, she said, when she walked into a Marriott hotel in Salt Lake City for a conference sponsored by the Association for Women in Psychology. "It was sort of this beautiful space where everybody was viewed as equal and having something to offer."

However, lately Johnson said she's realized that not everyone feels welcome. Students and members of AWP who are transgender (their identity does not match their sex assigned at birth) or who are nonbinary (their gender expression or identity does not adhere to the traditional man-or-woman view) have told her, "'I don't know if that's a space for me.'" She wants the tight-knit community to widen its circle and encompass greater gender diversity.

In an editorial published in this past summer's AWP newsletter, Johnson argued that removing "women" from the organization's name would represent an important step towards inclusiveness. "I strongly believe that women's liberation is tied up in destroying the gender binary and one way we as an organization can embrace this call is through expanding our focus beyond the binary notion of womanhood," she wrote.

To that end, the AWP is surveying members about their views on a name change and is considering adding a position of gender inclusivity coordinator to the governing board.

But some members of the group, particularly those who fought for women's rights decades ago, vehemently oppose those developments. In a counterpoint published in the same newsletter, eight veteran AWP members defended the organization's name as well as its focus. One of the co-authors is Oliva Espín, a psychologist and professor emerita of women's studies at San Diego State University. A member of AWP since she was in graduate school in 1973, Espín said that no organization can be all things to all people. "Black Lives Matter doesn't mean other people's lives do not matter," she said. "It means we have to focus on that because it's something that is still needed."

Women face issues of job discrimination, bodily autonomy, and lack of safety specifically because they are women, she said. "With all this emphasis on taking everybody in, what you're doing is diluting what the organization is about, and sort of denying the fact that women are still oppressed."

Scientific understanding is evolving to recognize that both biological sex and the cultural construct of gender lie on a continuum. (See, for example, the September 2017 issue of Scientific American and subsequent e-book on the new science of sex and gender.) And robust evidence supports the notion that racial, gender, and cultural diversity leads to better science. But who should take on the mantle of champion for people who aren't represented by traditional academic and professional organizations?

Like Espín, my mother was one of the original women's libbers. She worked as a secretary while earning a degree in physics engineering in an all-male department. It was from her that I first heard cartoonist Bob Thaves' line (paraphrased) that "Ginger Rogers did everything Fred Astaire did, only backwards and in high heels." Should women's organizations, still fighting for recognition in male-dominated fields, adapt to this new worldview by redefining themselves, I wondered? And will their own hard-won identity be diminished if they do?

In 1969, a group of about 35 psychologists who were fed up with what they perceived as the American Psychological Association's lack of responsiveness to the issues raised by the women's liberation movement, founded a separate group that would become the Association for Women in Psychology. Four years later, the fledgling AWP successfully lobbied for the creation of Division 35: the Society for the Psychology of Women within the APA. The APA now has more than 50 divisions, or interest groups, including Division 44 on the psychology of sexual orientation and gender diversity as well as Division 51 on men and masculinity.

Today, Division 35 and AWP still peacefully co-exist with many members belonging to both organizations, said Division 35's president-elect Carrie Castañeda-Sound, a professor of psychology at Pepperdine University. However, one difference I found between the two is that Division 35 is actively working to broaden the population it serves. On the APA website, for example, Division 35 leadership purposefully uses "womxn" to include feminists of diverse genders. ("Womxn" and "womyn" — both pronounced like "women" — are spellings intended to sever the word "women" from its patriarchal roots.)

That language, which is not consistent throughout their materials, is a sign of an organization in transition, said Castañeda-Sound. "We're in between still." What that looks like for her as a cisgender woman (someone who's identity aligns with the gender and sex assigned at birth) is empowering those with personal and research expertise in gender diversity to use their voice. "Leaning into those difficult conversations has been important," she said.

"It compels us to rethink what feels 'normal,''' she added.

The common thread that binds Division 35's diverse membership, said Castañeda-Sound, is intersectional feminism, the idea that discrimination based on race, class, gender, and sexuality interact to amplify inequality. As an example, she points to the group's guidance in the wake of Texas' controversial abortion ban, which prohibits abortions as early as six weeks, reminding mental-health providers that nonbinary and transgender people can have uteruses, too. "It's widening that discussion to say this isn't just affecting cisgender women," she said.

I sifted through websites and emailed representatives of more than a dozen organizations for women in science to see if other groups were similarly reflecting on their identity. Although most organizations focus on girls and women, I found a few indications of change. The Association for Women in Mathematics, for example, commits to "providing a supportive community for all self-identified cis- or transgender women and, more generally, for nonbinary or gender nonconforming individuals."

Graduate Women in Science, an international nonprofit, did respond, saying the organization is changing its initials to GWIS+, has removed gendered language from its bylaws, and is fundraising for fellowships to support anyone whose gender has affected their participation in science. And although the National Science Foundation's Advance program is nominally aimed at women, its criteria for awarding grants is broader. "The ADVANCE program accepts proposals that are working toward creating institutions that are equitable for all genders of STEM [science, technology, engineering, and math] faculty," lead program officer Jessie DeAro wrote in a statement to Undark.

In her dissertation research, Andrea Haverkamp, who recently completed a doctorate in environmental engineering with a minor in queer studies at Oregon State University, found that trans and nonbinary people identified the Society of Women Engineers as one of the least inclusive professional organizations. Engineering is a conservative, male-dominated field, she said, and SWE has resisted efforts to allow nonbinary people to apply for scholarships.

Nonetheless, even at SWE, times are changing. The Hawaiian Islands chapter recently joined with the Hawai'i Community Foundation to endow a scholarship supporting all underrepresented genders, including Native Hawaiian Māhū, gender nonconforming people recognized since ancient times in Polynesian cultures. SWE did not respond to a request for comment by deadline.

As a doctoral student in counseling psychology at Lehigh University, Meg Credit is at a similar point in their pre-professional career as Nic Johnson was when she discovered the welcoming community of AWP. But Credit, who is genderqueer — that is, does not subscribe to conventional gender distinctions — and uses they/them pronouns, does not think that the organization is right for them. "I'd be way more interested in joining a group that has a more broad definition of gender inclusivity," they said.

Johnson is their adviser, so Credit admits they may be biased, but nonetheless, agrees that it could be beneficial for AWP to change its name. "What I struggle with is, why not?" they said. "Why not be more inclusive in the language that we use?" At the same time, Credit acknowledges that language can be incredibly challenging — the term "womxn" is controversial, for example. Credit cares more about a group's intentions. "Do their goals align with greater inclusivity?" they asked. "Or is it just a performative thing?"

The AWP is welcoming of everyone and one of its core goals is equality, said Espín, but the intention of the group always has been to support people who identify as women. "If you're not a woman, create your own organization," she said. "Don't come in here to say 'you women have to change your name because I'm here.'"

Both Espín and Johnson concede that older and younger people tend to view AWP's mission differently. Younger women don't appreciate how much harder it used to be for a woman to do ordinary things, said Espín. "That it was not possible to have a credit card or a bank account or a mortgage to buy a house." Until passage of the Equal Credit Opportunity Act in 1974, lenders frequently denied credit to women, especially if they weren't married. It wasn't easy to change discriminatory practices, said Espín. And "it's not completely changed yet."

Pushing the group beyond its focus on women does not mean that society has achieved gender equality, said Johnson. "Quite the contrary," she said. "In my opinion the way for us to get towards gender liberation is to really be more inclusive in how we talk about gender and who we include in the conversation."

I thought about my mother, doubly burdened as a woman and a single parent, navigating a career in the sciences. Why is it Division 35's job to take on complex gender issues? I asked Castaneda-Sound. Do you lose anything by widening your research and support beyond women? "I think it's empowering," she told me. "Feminist psychology has always taken as an analysis of power. And in a society where there's power and privilege that comes with certain identities, I think we need to face that head on."

Haverkamp said that her research has convinced her that groups specifically focused on women and girls are actually counterproductive because they define women by what they are not—that is, men — and continue centuries-old judgements about bodies and abilities. "It's not tackling the issue of gender head on," she said. "And it's, in fact, just accepting that 'men are from Mars, women are from Venus', when we know that that is a very old fashioned and archaic way to view gender relations in society."

As a physics major and then a science journalist, I certainly benefited from trailblazers like my mother who came before me. But in talking with people whose identity does not fit in one of two checkboxes, I realized that gratitude for my foremothers doesn't mean that I can't work with all kinds of people to continue to deconstruct barriers based on gender. What if it weren't just Fred and Ginger, locked in the push-pull of an intricate choreography, but a whole room full of talented folks dancing their hearts out?

So, are women's organizations the right place to work towards greater gender diversity? I asked Haverkamp. She repeated the question and let it echo for a moment. "Either, yes, women advocate for greater gender diversity, or no, women shut the door, and they say we have our marginal stake in the system, you go figure it out yourself," she said. "The most feminist answer, would be 'yes' — to welcome in and advocate for the full, free, liberated range of gender expressions and embodiments in STEM."