The absolute best way to cook a turkey breast, according to so many tests 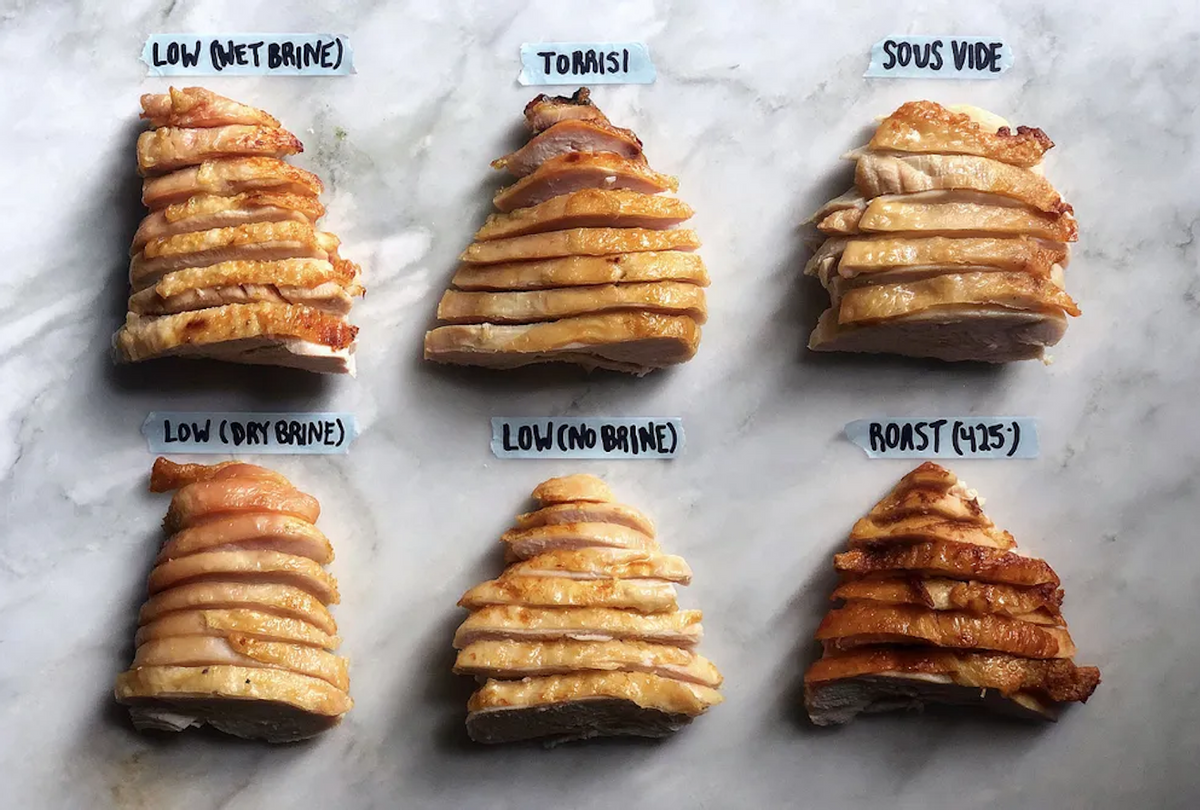 In Absolute Best Tests, Ella Quittner destroys the sanctity of her home kitchen in the name of the truth. She's boiled dozens of eggs, mashed a concerning number of potatoes, and roasted more broccoli than she cares to recall. Today, she tackles turkey breast.

There's no less appealing cut of raw poultry than the turkey breast. If you don't believe me, I invite you to stare one down for more than 30 seconds while ingesting a snack of any kind.

So when my editor emailed me with the subject line, "Fun Idea for Fall Absolute Best Tests," and suggested rather cheerfully that I tackle said mammoth, pinkish mounds of turkey breasts for my next column, I considered moving to a new state and permanently changing my identity for plausible deniability.

Accordingly, I called my butcher and got to work avoiding eye contact with 20-plus pounds of poultry. My goal was to find the absolute best turkey breast recipe for Thanksgiving—or any occasion, really. Each recipe has a unique method and cooking time, which ranges from 45 minutes to several hours. One method calls for wrapping the turkey in a combination of plastic wrap and aluminum foil, whereas others simply roast the turkey breast in a traditional roasting pan. And like any good recipe that calls for cooking meat, it's important to let the turkey rest before carving and serving it in order to lock in the flavorful juices. Behold, the results of my Absolute Best Tests: turkey breast edition.

I tested several different recipes and methods for cooking turkey breasts, but there were a few constants, which helped me determine the best recipe. First, I used bone-in, skin-on turkey breasts that were each roughly the same size. This particular cut takes longer to cook than boneless turkey breast, but also has the fatty skin that can crisp up beautifully when cooked in an oven in a roasting pan or in a cast-iron skillet. The breasts were seasoned only with butter, salt, and black pepper(except in the Torrisi method), and cooked until the meat in the thickest part registered 160°F on an instant-read meat thermometer (except in the Torrisi and Sous Vide methods).

This method for cooking bone-in turkey breast is based on the technique in Torrisi's Turkey—except adjusted for bone-in, skin-on breasts—with a pared-down version of the glaze. Check out the Genius Recipe for more details and tips.

Not far into the Torrisi method, I was reminded of the time my mother and I walked into what looked like a spa in Greece in pursuit of massages, though neither of us spoke the language. She pointed to the least expensive treatment on a list and we were both shocked when, moments later, a man ushered her into a small room, wrapped her in many layers of plastic wrap until she couldn't move her arms or legs, and then shot warm, lotion-like goo in between her body and the plastic.

Preparing a turkey breast for the Torrisi method was very similar in process, though unlike my mom's massage, it produced a delicious result. The roasted garlic–honey glaze was the best-smelling concoction I've had in my oven all year (and full disclosure, I eat frozen pizza basically every day). The meat—which was wet-brined in a solution that included sugar, unlike the other wet brine trial—was sweet, succulent, tender, more like ham than poultry. The skin was far from the crispiest of the bunch (the recipe doesn't call for skin or bone, in its defense), but its inclusion was more than worthwhile: Coated in garlic and roasted to a crackle, I would've missed it were it gone.

How To Cook Turkey Breast With A Sous Vide

This method is based on the technique in Serious Eats' Sous Vide Turkey Breast With Crispy Skin—except adjusted to cook the breast with its bone still in, for the sake of method comparison. Check out the full recipe for more details and tips.

You may feel as if you never want to touch turkey again after lifting a plastic bag of sous-vided breast from a 145°F water bath like it's an ancient object you found at the bottom of the sea. But once you get over its initial aesthetics, you'll accept that the sous vide turkey breast's meat is actually so tender and delicious, you might mistake it for mortadella with your eyes closed. As suggested by Serious Eats, I removed the breast's skin and crisped it separately in the oven. When still warm, the skin moulded nicely over the breast, such that it didn't look weird or detached when slicing. The skin didn't fully render its fat, which meant that, in addition to being delightfully crisp, it was the smallest bit chewy, a true treat.

How To Roast Turkey Breast Without A Brine

This roasting method is loosely based on the technique in Ina Garten's Herb-Roasted Turkey Breast. It ensures that the white meat stays juicy and tender while the skin transforms into two of the most important turkey traits: crispy and golden brown. Check out the full recipe for more details and tips.

Brining a turkey breast is kind of a pain, so I'm pleased to report that this trial was still satisfyingly juicy. It had slightly less moisture than its head-to-head counterparts (the Dry-Brine and Wet-Brine breasts roasted at 325°F), but not so much less that I'd say you absolutely need to brine. It did lack a bit of the flavor of the Wet-Brine breast, having its seasoning concentrated closer to the surface. Its skin was unexpectedly crispier than that of the Dry-Brine (more on that below), but a hair less crispy than that of the Wet-Brine, if you'll allow me to say "hair" so close to "wet skin" and "crispy."

This dry-brining method is based on Russ Parsons' Judy Bird. The roasting method is inspired by the technique in Ina Garten's Herb-Roasted Turkey Breast. Check out the full recipes for more details and tips.

Historically I've loved dry-brining poultry, and not just for the shock value of my roommate opening the fridge door to a bare, raw chicken breast splayed between our other groceries like it owns the place. It's a method meant to increase juiciness, while preserving and improving skin crispiness.

Dry-brining a turkey breast produced very moist, firm meat, more like the texture of high-quality deli turkey. While the skin did not crisp quite as effectively as I'd imagined based on my experiences dry-brining chicken, it did tighten and clench, almost as if the breast had had a facelift. The combination, while unexpected, was delicious.

This roasting method is loosely based on the technique in Ina Garten's Herb-Roasted Turkey Breast. Check out the full recipe for more details and tips.

This method for roasting bone-in turkey breast is loosely based on the technique in Bon Appetit's Butter-Roasted Turkey Breasts. The idea, as you probably gather from the title, is to crank the oven up to roast the turkey breasts quickly, rather than going low and slow. The cooking time takes less than one hour, which is ideal if you're in a time crunch. Check out the full recipe for more details and tips.

This breast had the crispiest, darkest skin, closest to that of a traditional Thanksgiving turkey. Its meat was surprisingly juicy right after cooking, though it became drier and a little crumbly within about an hour, relative to the breasts roasted at 325°F.

So, What's The Best Way?

So after all of these tests, what is the best way to cook a turkey breast? Honestly, it depends on what you're going for! If you prefer to skip the brine and want something truly exceptional, if unconventional, sous vide your breast and roast its skin separately in the oven. If you've got the time and interest to brine, go with a wet-brine—and add sugar, a la the Torrisi method, even if you're sticking to a classic roast method. If you've got the supplies, try out the Torrisi method, with or without the bone and skin, for sweet, deeply flavored meat.

Speaking of roasting, a lower temperature (325°F) will give you tender meat for longer—and you can crank up the temp toward the end for darker, crunchier skin. And don't forget about the caramelized pan drippings either—they're the key to a super flavorful gravy. After all, what is gravy without turkey (or macaroni without cheese, peanut butter without jelly)?