Is the QAnon "movement" a tragedy, a danger — or a terrorist group?

Half the people who stormed the Capitol were QAnon believers. Are they all mentally ill, or dangerous fanatics? 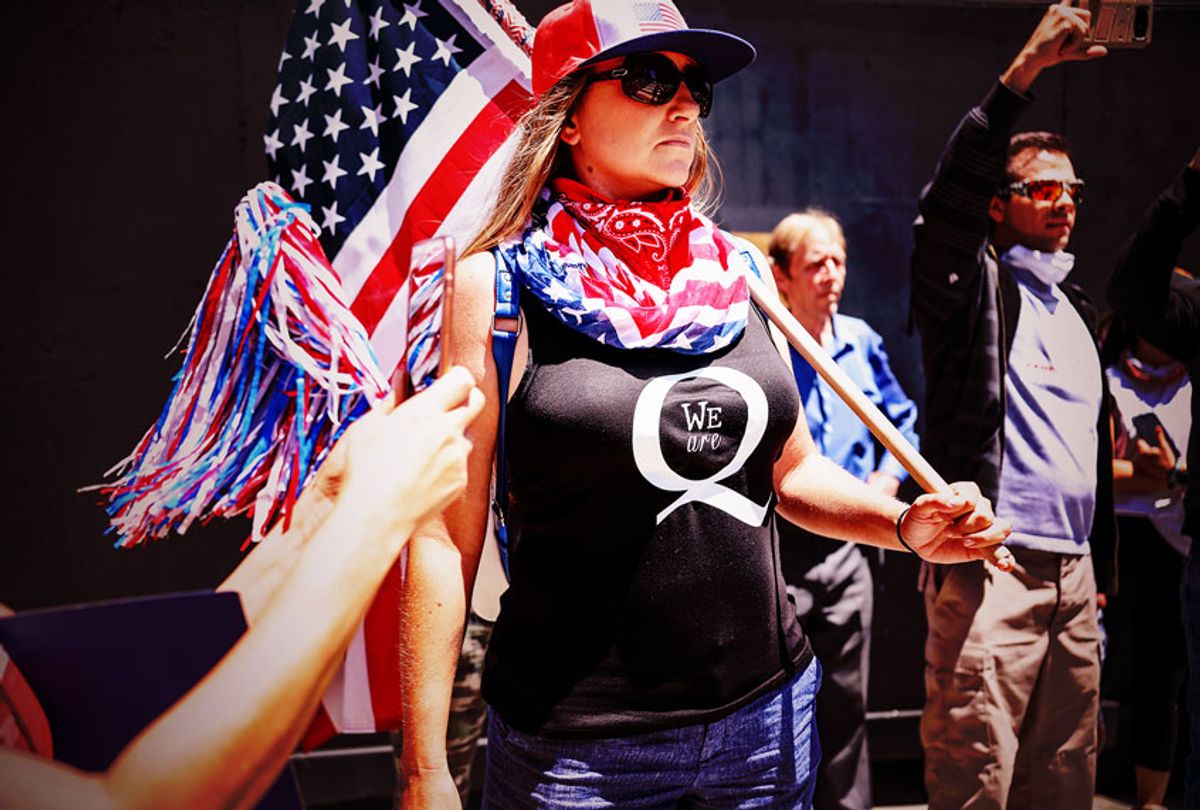 Conspiracy theorist QAnon demonstrators protest during a rally to re-open California and against Stay-At-Home directives on May 1, 2020 in San Diego, California. (SANDY HUFFAKER/AFP via Getty Images)
--

Already, one believer has murdered two of his children, saying they had "serpent DNA" and had to be killed to save humanity. There's evidence that a majority of the people who stormed the U.S. Capitol on Jan. 6, leading to more than a half-dozen deaths and nearly overthrowing our republic, were solidly within the QAnon cult.

This isn't quite as weird as it sounds; mass death or even murder of unbelievers, often for political or "End of Days" rationales, is a familiar trope within multiple world religions.

Over the years I've spent a lot of time in Israel, which is frequently the target of evangelists trying to convert Jews in anticipation of the End Times.

Many of these evangelists are quite upfront about their belief that in the end times, in preparation for the return of Jesus, all but 144,000 of the roughly 7 million Jews in Israel must die. And those who survive will all be converted to Christianity and "wear the names of the Father and Son on their foreheads throughout eternity." When that happens, Jesus comes down from the sky.

It's a belief that millions of Christians — and a solid majority of white evangelicals — fervently hold, and one of the reasons why there's so much support for Israel among the Republican white evangelical movement: That's where the mass death has to happen to bring back Jesus.

Jim Jones and David Koresh were proponents of such End Times beliefs, among others, and Adolf Hitler leaned heavily on Christian themes and prophecy to justify his slaughter of Jews, Roma people and LGBT folks.

"In defending myself against the Jews, I am acting for the Lord," Hitler said. "The difference between the church and me is that I am finishing the job."

There are similar death-cult movements within Sunni Islam, most famously offshoots of the Wahhabism that's as widespread in Saudi Arabia as evangelical Christianity is in the United States.

In both cases, the death-cult aspect of these religions has emerged in just the past two centuries; the most spectacular unveiling of Wahhabism's willingness to kill was seen by the world on Sept. 11, 2001 at the former World Trade Center in New York.

The genocide of Muslim Rohingya people in Myanmar by the Buddhist majority (mostly promoted via Facebook, which has been accused of complicity in the slaughter) was justified, they said, by the religion of Buddhism, which is generally considered one of the more peaceful among the world's great faiths.

Much like the Old Testament documents numerous slaughters called for or approved by G-d (particularly in the Book of Joshua), the Hindu Vedas detail multiple, sometimes genocidal wars, both as metaphors for the "battle for inner peace and enlightenment," and as actual historical stories.

So what are we to make of the apparent reality that several million Americans — many sucked into this by Facebook and other social media, just like the killers in Myanmar — are followers of a religion that either predicts or calls for the murder of Jews and Democrats?

So far they've racked up an impressive record, by American cult standards. They include, as reported by Lois Beckett at The Guardian:

All, apparently, in the name of QAnon, the religion that has now become the core of their lives.

RELATED: How QAnon convinced a Parkland shooting survivor's dad that the tragedy was a hoax

And that doesn't include the better-known instances, like the guy who shot up a pizza joint in Washington, D.C., looking for the basement where Hillary Clinton hid children whose blood she was going to drain to obtain adrenochrome.

Or the fellow who blew himself up in front of the AT&T building in Nashville to stop the lizard people.

One theory is that a "tribe of the mentally ill" are finding each other through Facebook and other social media and being led by Donald Trump, himself a case study in mental illness.

The University of Maryland's National Consortium for the Study of Terrorism and Responses to Terrorism notes that 68% of the open QAnon followers arrested at the U.S. Capitol on Jan. 6 who had also committed crimes before or after that coup attempt "have documented mental health concerns, according to court records and other public sources."

The "QAnon Shaman" of so many iconic 1/6 pictures has now pleaded mental illness as his reason for showing up at the Capitol, as have two others who "were found to be mentally unfit to stand trial and were transferred to mental health care facilities."

Of the six women arrested on Jan. 6 who'd also committed crimes before or after the coup attempt, the researchers note, "all six … have documented mental health concerns."

But that's probably far too glib an explanation: Tens of millions of Americans are members of odd cults, many that believe in the end times, and most mental health professionals would be reluctant to call them all mentally ill.

Mainstream Christians teach their children about a guy who has flying reindeer, after all, and most Americans profess to believe in a Jewish guy 2,000 years ago who rose from the dead after walking on water and turning water into wine.

Another theory is that QAnon is meeting some deep social or psychological need for people who otherwise feel marginalized in society.  A year of lockdown from Covid could certainly exacerbate this loneliness and search for community and belonging.

Or maybe it's just the power of Facebook's algorithm and new "group" system. At the very least, it's been mobilizing QAnon-friendly or QAnon-aligned white people across small-town America.

Last summer on a warm Sunday night in the small Oregon town of Klamath Falls, about 200 locals showed up downtown with guns, baseball bats and whatever other weapons they could find around the house to fight off the busloads of Black antifa marauders who they believed Jewish billionaire George Soros had paid to put on a bus in Portland and was sending their way.

Of course, George Soros had done no such thing and there were no busloads of Black people. But the warnings were all over the Klamath Falls Facebook group, and, it turns out, similar Facebook groups for small towns all over America.

Literally, from coast to coast, that weekend white residents of small towns showed up in their downtown areas with guns, rifles, hammers and axes prepared to do battle with busloads of Black people being sent into their small white towns by George Soros.

Nobody's sure whether these messages, which activated frightened white people across the nation, came from local white supremacist groups trying to gauge if they could actually kick off a second American Civil War, or whether they came from some foreign government trying to tear America apart.

In the tiny town of Falls, Washington, frightened white people brought out chainsaws and cut down trees to block the road leading to their town.

In South Bend, Indiana, police were overwhelmed by 911 calls from frightened white people wanting to know when the "antifa buses" were arriving.

And in rural Luzern County, Pennsylvania, the local neighborhood social media group warned people that busloads of Black people were "organizing to riot and loot."

Similar stories played out that week from Danville, California, to Jacksonville, Florida, as documented by NBC News.

A few weeks ago, Facebook announced it was banning Qanon groups from the platform, but if its history banning right-wing extremism and COVID lies is any indication, it'll have little impact.

So what do we do about cult-aligned neighbors who are fantasizing about killing Jews and Democrats?

And for good reason: If you're a progressive, for example, would you want the force of the federal government coming after you for "domestic terrorism" during a Trump or Josh Hawley administration? That's exactly what's happening in Russia, Hungary and Turkey at this moment, by way of taking down political opponents of those authoritarian regimes.

Or are most of these people just so deeply craving social connection and meaning in their lives that QAnon is, for the moment, meeting those needs?

If so, and that was probably the case with many of the cults that were widespread in the 1970s and 1980s, odds are as the cult is discredited they will fall away and join organizations that offer a healthier outlet for their social and activist needs.

That's certainly what happened in the 1980s around the McMartin Preschool "ritual Satanic child abuse" allegations that bear such a striking resonance to QAnon's assertion that Democrats are drinking children's blood in new Satanic rituals.

Given that millions of Americans are now members or followers of QAnon, it's also possible the religion will undergo the same kinds of transformation that many of today's smaller but mainstream religions have.

The Seventh Day Adventists, for example, started out as a doomsday cult and are now a healthy and respectable Christian sect. Ditto for the Mormons, the Salvation Army and, some would argue, the Jehovah's Witnesses.

On the other hand, if the emerging leadership in QAnon continues to center the religion around deifying Trump and fantasizing about killing Jews, Democrats and elected officials, it'll continue to evolve more and more in the direction of being a political hate group like the Klan, which has its own set of Christian-aligned and antisemitic theories.

To that end, the FBI is now tracking the movement.

It's not surprising that America — which has been an incubator for weird cults for much of our history, particularly in the 1600s and the late 19th century — has come to this place with this newest cult, which is now spilling over worldwide.

And there are still open questions about how much of the Q activity in this country is being incited or driven by foreign actors.

Over time, QAnon will probably either become more of a mainstream religion/social club with a gradually normalizing belief set, or will continue down the antisemitic and racist rabbit hole and shrink in size as its willingness to condone violence becomes more problematic.

However this all shakes out, if a member of your circle of friends or family has fallen into the cult, cutting them off altogether may be the least useful strategy: It will just drive them deeper into the cult, seeking a replacement for lost friends and family and affirmation of their new worldview.

If they're hoarding weapons and talking about killing Jews and/or Democrats, though, it's a good idea to flag family members and let someone in the law enforcement community know.

Freedom of religion is one of America's top values and deserves respect. Terror groups, on the other hand, have no place in a civilized society.