Viewed through the "white racial frame," Rittenhouse is an innocent, childlike victim, not a disturbed killer 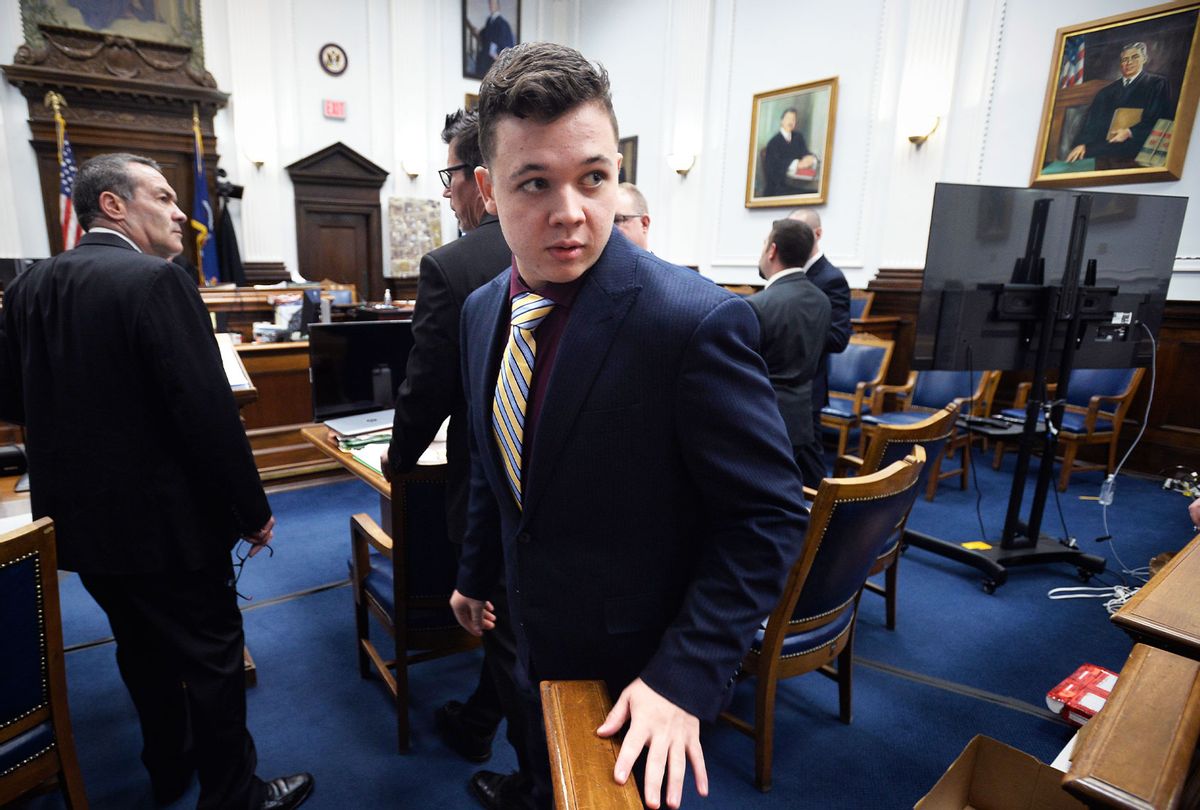 Kyle Rittenhouse, center, enters the courtroom after a break at the Kenosha County Courthouse on November 11, 2021 in Kenosha, Wisconsin. Rittenhouse is accused of shooting three demonstrators, killing two of them, during a night of unrest that erupted in Kenosha after a police officer shot Jacob Blake seven times in the back while being arrested in August 2020. Rittenhouse, from Antioch, Illinois, was 17 at the time of the shooting and armed with an assault rifle. He faces counts of felony homicide and felony attempted homicide. (Sean Krajacic-Pool/Getty Images)
--

Kyle Rittenhouse's murder trial stinks of the white racial frame. The smell is oppressive, smothering. It's hard to breathe. As Toni Morrison once explained, "The function, the very serious function of racism is distraction. It keeps you from doing your work. It keeps you explaining, over and over again, your reason for being."

As sociologist Joe Feagin explains in his book of this name, "The White Racial Frame" is a way of normalizing (and naturalizing) white privilege and white power over American and Western society. It is a manifestation of systemic racism. Through the white racial frame, "white" people as a group are deemed more morally virtuous and generally superior to others, and specifically to "Black" and "brown" people. For example, the white racial frame includes deeply held stereotypes about nonwhite peoples and cultures and elevates "white civilization" over all others.

Ultimately, not to see how the white racial frame operates in the Kyle Rittenhouse trial is to deny basic realities about the color line and how it structures race, privilege, power and basic questions of life and death in American society and around the world.

Rittenhouse is on trial for shooting three men — killing two of them, and seriously injuring the third — on the night of Aug. 25, 2020, in Kenosha, Wisconsin. At the time of this writing, the jury is still deliberating its verdict.

Rittenhouse was 17 years old when he committed the alleged crimes. He is apparently a cop fetishist and a devotee of Donald Trump. He was photographed celebrating with an alleged white supremacist gang while awaiting trial.

Rittenhouse chose to travel from his home in Illinois to Kenosha that night, and has claimed he intended to serve as a "medic" (although he has no relevant training) and to help protect private property during the disturbances that took place in response to the police shooting of a Black man named Jacob Blake. Rittenhouse was armed with an AR-15 assault-style rifle.

Rittenhouse is claiming the right of self-defense even though he chose to insert himself into the tumultuous events of that summer night in Wisconsin. Witnesses for the prosecution have testified that Rittenhouse instigated the life-threatening situation, in which he then claimed the need to use lethal force to protect himself.

After he shot three people, Rittenhouse made a brief attempt to surrender to law enforcement, who ignored him.

The judge presiding over Rittenhouse's trial has displayed obvious bias in favor of the defendant, including allowing his defense attorneys to incorrectly describe the men he shot as "looters" and "arsonists," rather than "victims." This week, the judge also used racially provocative, if not outright racist, language in discussing a Black jury member from a previous case.

During Rittenhouse's testimony last week, he turned hysterical, sobbing dramatically and unable to maintain his composure, to the point where the judge declared a recess. Whether his grief was authentic or a calculated performance is ultimately irrelevant.

What do we see if Kyle Rittenhouse's trial and related events are viewed through the white racial frame?

Through that prism, Rittenhouse is himself a "victim" rather than an apparent vigilante who went to Kenosha that night as a way to play out his fantasies of being a police officer, part of the "thin blue line" who enforce "law and order."

Through the white racial frame, Rittenhouse is also seen as inherently innocent, a "man-child" who is clearly incapable of hateful thoughts or heinous crimes, and who cannot be held responsible for his behavior.

Trayvon Martin, Tamir Rice and so many other Black and brown children killed by police or vigilantes are never allowed such assumptions of inherent goodness, innocence and vulnerability.

As historians, psychologists and other experts have repeatedly documented, Black children or teenagers are stigmatized and dehumanized in American society through a process called "adultification," where despite their young age they are seen through the white racial frame as menacing adults. In practice, this of course means that Black children are marked as less worthy of care and concern than white children of the same age.

On the other side of the same coin, white adults are often infantilized, where whatever their age they are viewed as youthful, with the understanding that their reckless or destructive behavior is expected and forgivable. For example, Donald Trump's adult sons are often referred to by right-wing media as the "Trump boys," which reflexively insulates them from responsibility for their alleged crimes and other antisocial behavior.

One of the most notorious examples in American history of the white racial frame's destructive power, when it comes to Black children, was the 1944 execution of a 14-year-old boy named George Stinney Jr. In an essay this week for the Boston Globe, Renée Graham explains:

History doesn't say whether George Stinney Jr. cried during his two-hour murder trial. No one knows if any lawyer, including his own, referred to him repeatedly as "a kid" to curry sympathy with the jury.

What's known is that it took an all-white jury 10 minutes to wrongly convict Stinney in 1944 for murdering two white girls in rural South Carolina. He was 14. Two months later, Stinney, 95 pounds and barely over 5 feet tall, sat on a Bible as a booster seat in the electric chair. Exonerated 70 years later, Stinney is often mentioned as the youngest person this nation has ever executed.

Being a Black child afforded Stinney no mercy from a death sentence. For Kyle Rittenhouse, his lawyer is wielding Rittenhouse's youth as a reason to acquit an accused murderer.

"My client was 17 years old," said Mark Richards, Rittenhouse's lead defense attorney, during his closing argument before the jury Monday. "His actions are to be judged as a 17-year-old's."…

If Rittenhouse were Black, his tears would have gotten him nowhere. Even when Black children are victims of racial violence, they receive little compassion and are perceived as adults rather than minors. During a 2012 bail bond hearing, George Zimmerman, who killed Trayvon Martin, told Martin's parents, "I did not know how old he was. I thought he was a little bit younger than I am." Martin was 17. Zimmerman was 28.

When two Cleveland cops killed Tamir Rice in 2014, they said they believed the 12-year-old Black child was much older, a sentiment echoed by a prosecutor who said Rice was "big for his age," as if that justified his death. No charges were brought against the officers.

America's psychotic obsession with guns cannot be properly understood if the white racial frame is ignored. Similarly, any discussions of the Rittenhouse case and its links to America's epidemic of gun violence are superficial if they overlook the symbolic and literal power of white men with guns in American society.

As Carol Anderson, Richard Slotkin, Roxanne Dunbar-Ortiz and other experts have repeatedly demonstrated, for centuries guns have been an instrument for enforcing white power, white authority and "white freedom" against nonwhite people, the poor, women and other marginalized groups.

Even the theoretical idea of Black or brown people or Muslims exercising the Second Amendment rights so cherished by the American right triggers a type of panic, the fear of "terrorism" and feelings of threat and danger — danger to white society, that is — which is likely to be met with lethal force.

It should be no surprise that the vast majority of gun "super owners" — that is, the 3% of American adults who own more than half of the country's 265 million guns — are white men. Social scientists and other researchers have also shown that gun ownership and support for concealed carry and "stand your ground" laws are highly correlated with white racial animus and overt racism.

The white racial frame intersects with race and gender in other ways as well. In a series of interviews, Rittenhouse's mother has told the media that her son "would go back out again" to "help people." She has defended his "innocence" and his right to self-defense.

If a Black or brown or Muslim woman (or for that matter, an avowed progressive or leftist) offered similar defenses of an adult child who had killed two people and maimed a third during a chaotic street protest, the mainstream news media — not to mention the right-wing propaganda machine — would depict her as a monstrous, heartless example of failed parenting. She would become a national prop used to illustrate the dangers of "broken homes," "single-parent households" and other "pathologies".

Considered in full, Rittenhouse's murder trial is a textbook example of the white racial frame's role in America's two-tiered criminal justice system, where there is one standard of justice for white people and a different one for Black and brown people. As has been repeatedly shown, throughout America's criminal justice system — from initial encounter and arrest to incarceration, sentencing and parole — white people benefit from racist practices that lessen their punishment, especially as compared to Black people.

It's almost unnecessary to observe that if Kyle Rittenhouse were Black or brown or a Muslim, he would almost certainly would have been shot dead by the police that night in Kenosha.

It is a crucial categorical error to see the white racial frame as an aberration in American history, American justice and American society. It is nothing of the kind — it is the system working exactly as designed.

More from Salon on the killings in Kenosha and the Rittenhouse trial: