The Rittenhouse effect: Republicans want a Stasi of their own 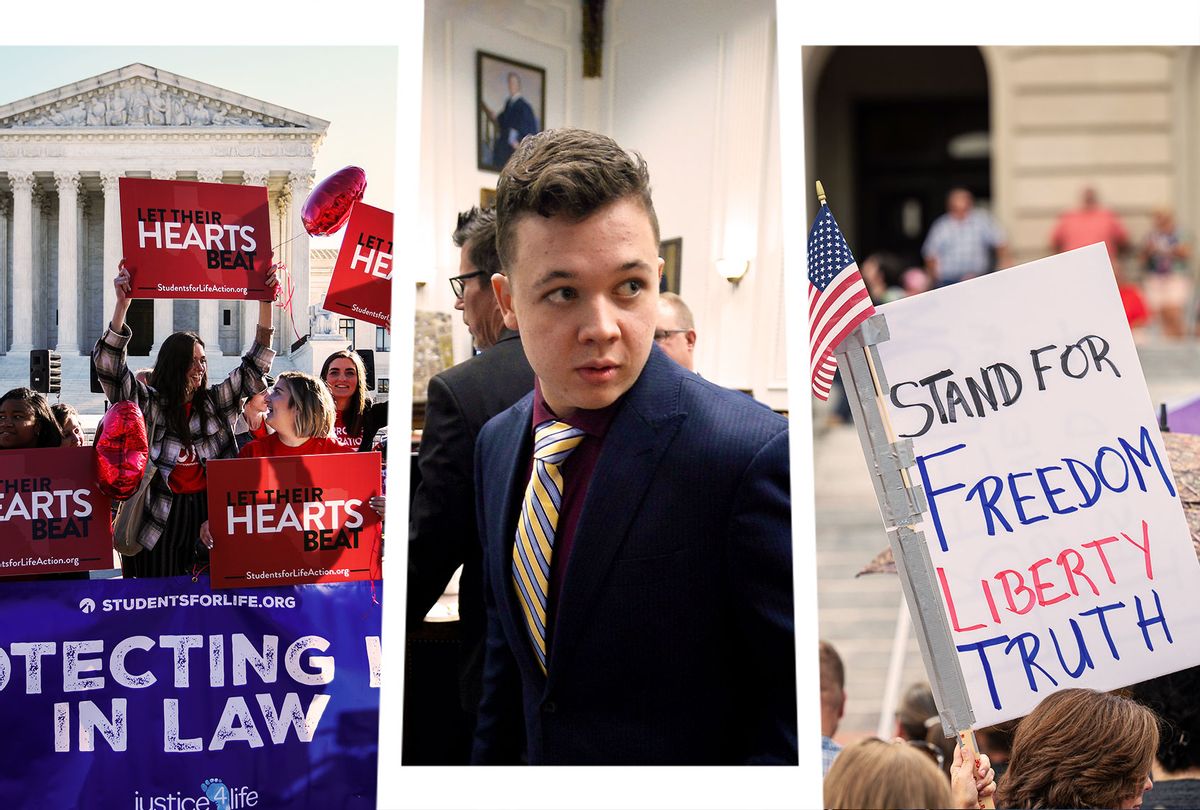 Pro-life demonstrators protest outside of the US Supreme Court in Washington, DC on November 1, 2021. | Kyle Rittenhouse enters the courtroom after a break at the Kenosha County Courthouse on November 11, 2021 in Kenosha, Wisconsin. | People display signs during the Kentucky Freedom Rally at the capitol building on August 28, 2021 in Frankfort, Kentucky. Demonstrators gathered on the grounds of the capitol to speak out against a litany of issues, including Kentucky Gov. Andy Beshear's management of the coronavirus pandemic, abortion laws, and the teaching of critical race theory. (Photo illustration by Salon/Getty Images)
--

Despite the high-minded rhetoric from Republicans about the supposedly noble intentions behind bans on what they call "critical race theory," progressives have suspected from the get-go that the whole thing is actually an exercise in censorship. This suspicion has been validated by the fact that the book targeted by Republican Glenn Youngkin's gubernatorial campaign in Virginia was the Pulitzer-winning classic "Beloved" by Toni Morrison. Or the fact that North Dakota's law bans any materials suggesting "racism is not merely the product of learned individual bias or prejudice, but that racism is systemically embedded," language that objectively bans teaching the history of slavery or Jim Crow. Or the fact that teachers in Texas took their own "critical race theory" law to mean that they had to teach "both sides" of the Holocaust.

One of the most prominent groups advocating for this heavy-handed censorship is the misleadingly named "Moms for Liberty," which presents as a "parents rights" group, but is in fact a racist organization dedicated to banning books about Martin Luther King Jr. and replacing them with books that insist there was no racial component to American slavery. Now the New Hampshire branch of Moms for Liberty is taking it to the next level. As Insider reports, the group is offering a $500 bounty to any person who reports a teacher supposedly breaking the law banning "critical race theory."

This bounty isn't just about the letter of the law, which is already confusing and contradictory. Consider that Moms for Liberty's list of books they want to be censored include those that teach that events like the March on Washington or Brown v. Board of Education. By offering this bounty, they send a strong signal to teachers of New Hampshire that, if they want to keep their jobs or at least not be harassed by right-wing activists, it would be wiser to simply avoid teaching any American history that touches on race or racism. So kids will get MLK Day off from school, but teachers will be afraid to tell them why.

As Greg Sargent of the Washington Post writes, these poorly worded "critical race theory" laws "could chill the teaching of that full truth" by causing teachers to fear parents arguing that "recounting history itself creates heretical impressions." Indeed, there's no way around it, as Jim Crow and legal slavery are the very definition of the systems of racism now banned from being talked about in multiple states. It's all very Stasi-like, right down to using the fear of being turned in by your neighbors to keep people from even talking about topics that the right wants to forbid.

Indeed, one of the main selling points of the Republican march towards fascism, for its base, is this fantasy of a society where people live in abject terror of their right-wing neighbors, afraid to express progressive opinions or even to admit historical facts about the United States. That much is evident in the GOP base rallying around Kyle Rittenhouse, who has been on trial for shooting three people at a Black Lives Matter protest last year, killing two of them.

The case itself is mired in of-the-moment debates about who started what violence with who at the protest. But that's not really the reason that Rittenhouse has become a right-wing folk hero. He's become a cipher for widespread anger on the right about the very existence of Black Lives Matter protests, and a desire to use violence to silence anti-racist speech. If Rittenhouse is acquitted, it sends a signal to all the gun nut right-wingers out there: It's cool to show up at Black Lives Matter protests loaded down with guns, which is, of course, about scaring people out of showing up to protest racism in the first place.

"People cannot freely exercise their speech rights when they fear for their lives," Diana Palmer and Timothy Zick write at the Atlantic. "The increased risk of violence from open carry is enough to have a meaningful 'chilling effect' on citizens' willingness to participate in political protests."

That silencing is the underlying intent is evident, as I noted in yesterday's column, by the fact that a number of Republican legislatures have introduced and even passed laws that make it easy to get away with murdering left-leaning protesters, so long as you run them over with your car. There's a lot of hand-waving about "self-defense" used to justify such awfulness, but the purpose is not exactly hard to see. This is about deputizing ordinary conservatives to suppress free speech — with violence — when the Constitution prevents the government from doing so directly.

The connective tissue between the valorization of vigilante violence against progressive speech and the Texas "bounty hunter" abortion law is not hard to see. As Jill Filipovic argued in her newsletter, the law is "the codification of anti-abortion terrorist tactics" and rooted in the "same urge to publicly shame and humiliate women" and "the impulse toward vigilantism and violence" that drives anti-choice protesters to stake out abortion clinics to heckle the people going inside — or worse, as the long history of anti-choice violence demonstrates.

That longing from right-wingers to police and abuse their neighbors isn't the only thing that abortion bans have in common with book banning to combat "critical race theory" and Rittenhouse-style intimidation tactics. The right has long used the touchy subject of abortion as a place to field test their ugliest ideas. That extends very much to the right-wing war on free speech.

Under Donald Trump, the Department of Health and Human Services banned doctors at clinics that receive federal funds from even mentioning abortion to patients. As with the "critical race theory" laws that intimidate teachers from even talking about slavery or Jim Crow, the abortion "gag rule" was about creating a Stasi-like environment at public health clinics, where doctors feared even mentioning abortion to patients — even when patients asked for it — out of fear that they might be ratted out to the government. President Joe Biden's administration thankfully repealed the gag rule, allowing doctors to once again direct patients who want abortion to safe options — but the template for the right's war on free speech has been fixed.

Republicans use the hot button issues of race and sexuality to create oppressive environments, where people like teachers or doctors refrain from speaking even basic truths. This makes ordinary people afraid to go to an anti-racism protest for fear of getting shot or run over by right-wingers, whose murderous impulses are being validated by the courts or state governments. The goal is a society where everyone is looking over their shoulder all the time, scared that a malicious right-winger will make their lives hell for thought crimes like "racism is real" or "women have a right to choose." It's the stuff of what is usually considered dystopian fiction. But for the Republicans, it is apparently what they hunger for America to look like.