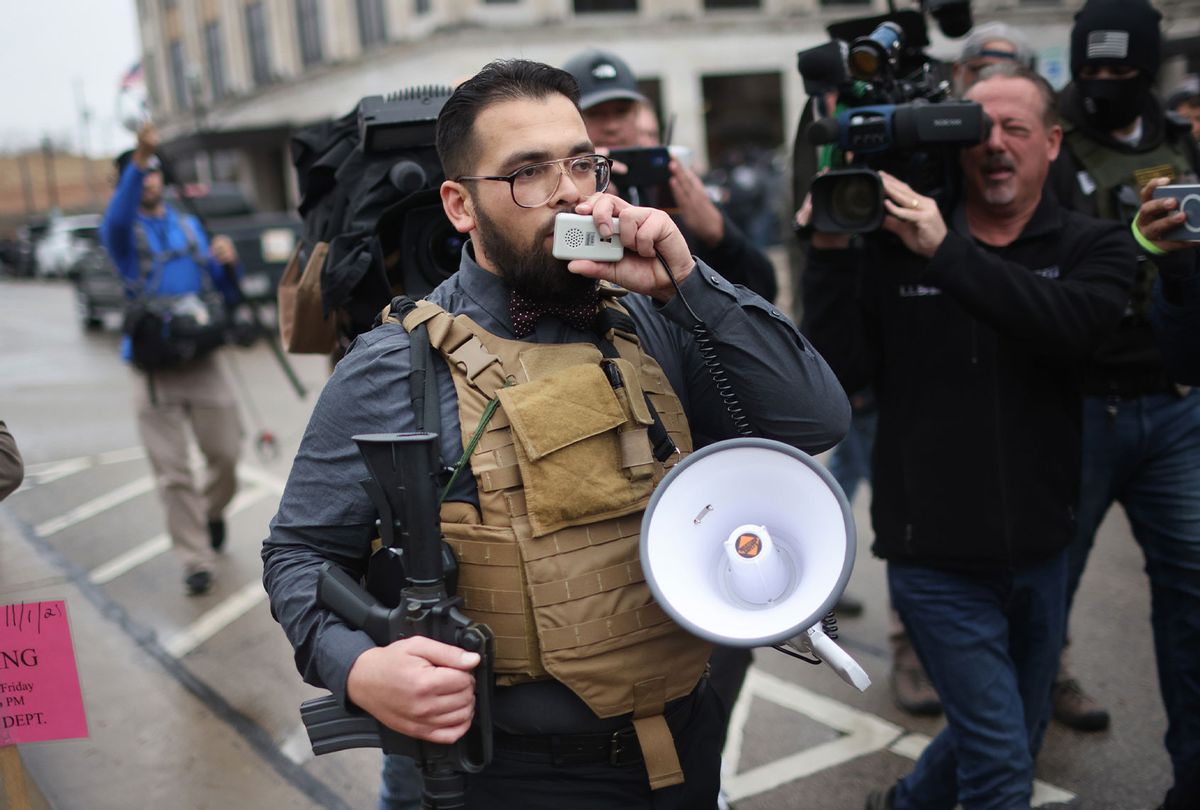 A demonstrator armed with an AR-15 style weapon protests outside of the Kenosha County Courthouse as the jury deliberates for a second day in the trial of Kyle Rittenhouse on November 17, 2021 in Kenosha, Wisconsin. (Scott Olson/Getty Images)
--

A man spotted with an AR-15-style rifle outside of Kyle Rittenhouse's trial in Kenosha, Wisconsin, where the 18-year-old was just acquitted of all charges on Friday, was identified as an ex-Ferguson police officer from Missouri, who was fired over stalking and assault charges.

The man, Jesse Kline, who goes by the moniker "Maserati Mike," first arrived on the scene in a Maserati earlier this week, wearing dress shoes, slacks, button-up shirt, and a tactical vest, according to FOX 2. Carrying a bullhorn and a long rifle, Kline has over the last several days has reportedly become notorious for blasting loud music and tarring Black Lives Matter (BLM) as a terrorist organization.

On Wednesday, Sheriff's deputies stopped Kline and asked him to put away his rifle, a request he complied with since he did not have a concealed carry license. Kline shortly drove away from the scene. But on Thursday, The Independent reported, the man returned with what appears to be a sex toy, chanting "Yeah!"

"You are not welcome in our city!" a passerby yelled back at Kline.

Back in 2018, Kline was dismissed from the Ferguson Police Department over accusations of threatening and following a man and woman with whom he'd been in a romantic relationship.  According to KSDK.com, Kline allegedly accosted the man in his backyard, pointing his Glock 21 handgun at the man and prodding him in the chest with the barrel.

"Kline then called the woman 'vulgar names' and drove away from the home," the report said. In January 2020, the couple's charges against Kline were dropped after prosecutors found that there wasn't enough evidence to support the couple's account.

Asked about the couple's allegations, Kline told NBC News on Thursday that "sometimes people lie to the police and charges get dropped."

"I wanted to let you know I'm government-funded and sometimes I glow in the dark," he added.

On Wednesday, two protesters were arrested outside the Kenosha County Courthouse, where demonstrators aligned with both sides of the trial have routinely engaged in verbal standoffs.

Ahead of the verdict, ABC News reported, Wisconsin Gov. Tony Evers has already greenlit the deployment of 500 National Guard troops as a public safety measure.

"We continue to be in close contact with our partners at the local level to ensure the state provides support and resources to help keep the Kenosha community and greater area safe," Evers said in a statement. "I urge folks who are otherwise not from the area to please respect the community by reconsidering any plans to travel there and encourage those who might choose to assemble and exercise their First Amendment rights to do so safely and peacefully."

Rittenhouse's trial has yet to reach a verdict as the jury enters into its fourth day of deliberations.