Plus, Leone shares his method for a perfectly juicy turkey and flavorful gravy 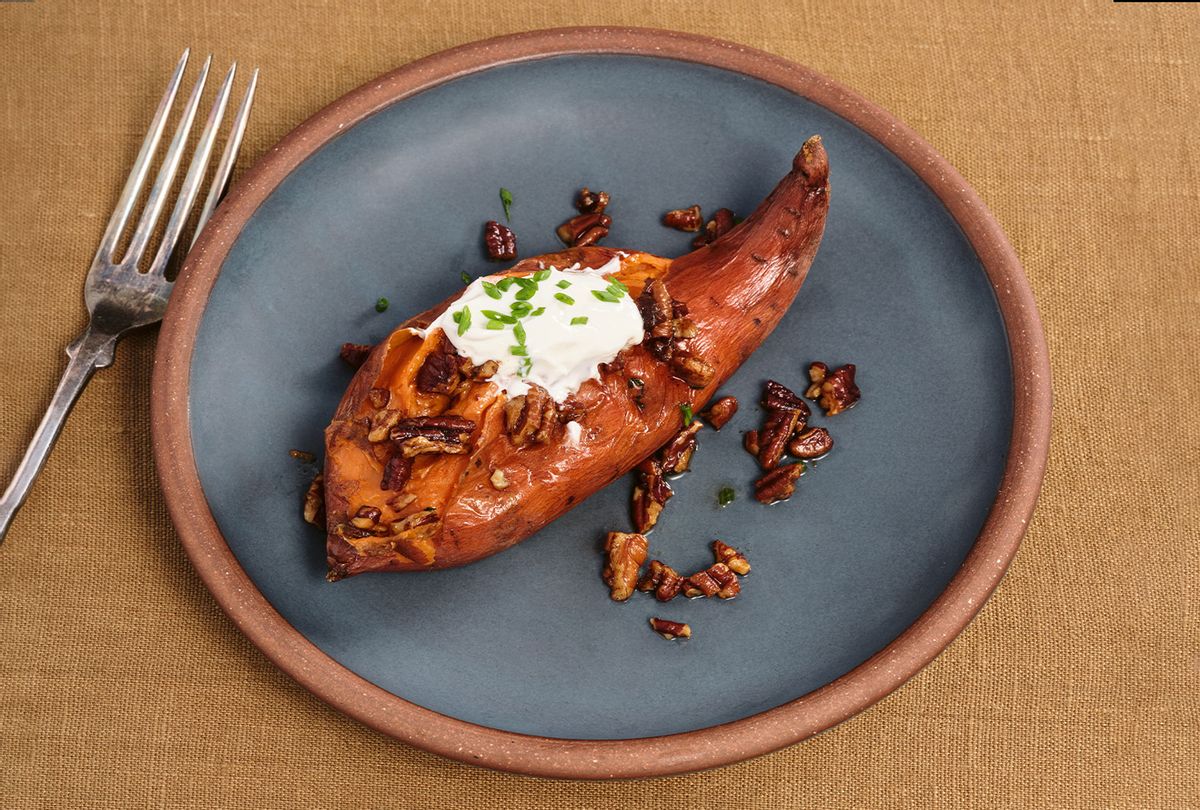 This article is part of "Thanksgiving Your Way." From traditional to not at all, 2021 is an opportunity for carving out new traditions and resurrecting old ones.

Most of the action in Brad Leone's new cookbook, "Field Notes for Food Adventure" takes place outside the confines of the kitchen walls — a creative direction that is likely welcome after over a year of rolling pandemic lockdowns and stay-in-place orders.

Over the course of 13 chapters, Leone, a longtime "Bon Appetit" staffer and host of the publication's YouTube series "It's Alive," forages for ramps and mushrooms, gets into open water to source squid and seaweed, hunts for deer alongside his dad and taps trees to make maple syrup. The result is recipes like Shrimp and Sap Soup, Venison Andouille and Grilled Maitakes.

Taken together, it's also a meditation on seasonality and how it impacts the way we eat, a reality that we've gotten away from as more and more of us shop at big box supermarkets with a static produce department that looks mostly the same whether you're shopping in January or June.

As Leone writes in the introduction to "Field Notes," he loves how the Northeast is impacted by all four seasons.

"Sure, it's always sunny and nice in California, but summer all year sounds kind of terrible to me," Leone said. "Call me crazy, but I need that change and all the great things that follow with it. It reminds me that I'm alive and part of this mystery that we call life."

Leone spoke with Salon about the development of the cookbook, his tips for embarking on a food-based expedition in your own backyard and his plans for Thanksgiving. He also shared a recipe from "Field Notes for Food Adventure" that belongs on your table this holiday season.

Ashlie Stevens: So, one of the major themes in this book is seasonality. Simple question: But at what point in the book-writing process did you know that you wanted to use that as an organizing principle?

It's something that's always been super important to me — part of the reason why is that I still live on the east coast. I wasn't necessarily shopping around a book, but I met the folks from Voracious (a food-focused imprint at Little, Brown and Company) and they were kind of into me having this vision.I think at the end of the day, the last thing I wanted to do is make just a cookbook of just recipes and food and recipes and food. There's a lot of that out there and I'm glad, but I wanted to do something that more encapsulated, I don't know, the "broadness" of myself.

AS: I wouldn't classify myself as an "outdoorsy" person, but I wanted to get outside after reading this book. What tips do you have for folks who are apprehensive about getting out in nature to get more connected to their food or don't know where to start?

First of all, amazing. Mission accomplished in getting you inspired to want to go outdoors. I think at the end of the day, no matter what you do outside, I guarantee you that you're going to be hungry. So that ties right into making a cookbook of the outdoors that inspires people to get outdoors.

Advice for people — I mean, don't overthink it. If you're allergic to poison ivy, stay away from poison ivy [laughs]. If you're new to the trail, stay on the trail. Other than that, just let your inner child out. I think folks are more in tune to the outdoors than they let themselves be.

AS: I know that COVID changed a lot of people's relationship with food and cooking. Was that the case for you and did that inform the book in any way?

Yeah, I mean, it was 100% a pandemic project. At times, it was rather scary. But in a positive light, it helped me achieve something that I was working on doing and saving money to do, which was to get out of New York City and I bought an old farmhouse up on the coast of coastal Rhode Island on the border of Connecticut.

I've just really been able to grow vegetables and can tomatoes and do a lot of fishing, raise chickens and feed my family. It's been amazing to become more involved in my own personal food chain.

AS: Well, you bring up family. I was curious — what did it mean for you to be able to include your father's recipes in this book?

It's a very emotional and sentimental book to me. I mean, to be honest, I made this book for my family — I was able to put my kids in it. Looking at my dad and thinking, "Oh, man, he's going to be 70." I think of this as a major time capsule and no one from my family has ever done anything remotely like this.

To be honest, the only thing I wish there was more of was my mom. We have one photo where we are crabbing, but there were a couple times she didn't feel like she was ready for a picture in a book, that kind of thing. But there's a whole chapter in homemade to my dad, "Deer Dad." He was a huge part of the man I am today, regarding my love for the outdoors, my personality and my sense of morality. It comes from how my parents raised me, being very outdoorsy, hunting and fishing and having respect for nature.

Also, both my folks were very good cooks that just had access to whatever was on sale at the supermarket or what we grew. I don't think I'd be in a situation where people cared about what I thought about in the food space and the human space without having a really healthy and nice family.

AS: Fishing and hunting are ever-present through this book. You talk about this a bit in the introduction to the chapter "Deer Dad," but did learning to hunt and fish make you more conscious of ethical meat consumption/compassionate killing? Does it impact the type of meat you eat at home?

Oh, 100%. I mean, the more you know — you can't go back once you see the truth in the light. I've made a video about pheasant hunting and wild boar hunting and stuff. It's all about your perspective. At the end of the day, I don't think anyone likes factory-farmed food, and the industrialization of our food chain is a major, major problem, as is the destruction of the localization of our food.

There's this massive paradigm shift of people caring and then realizing that we do have a lot more power and control of the market through how we shop. The big companies tend to follow if we demand it. We are the shepherds of our food on this planet. To me, having kids, it really clicked the light to how fragile this food system is and how important it is.

AS: If folks are looking for a recipe or two from your book to toss on their Thanksgiving table, what would you point them to?

First, I'm going to give you a recipe that's not from the book. I really want to do it this Thanksgiving. I wish it was in my book; maybe if I make another one it will be.What I've always wanted to do is break the turkey into parts and then do a real kind of semi-shallow braise in a gravy. So fill it up until it's almost submerged, and by the time it renders down in the oven, you'll have a perfectly tender and juicy turkey that has also built a perfect gravy as it cooked. You get two birds stoned at once.

The next recipe comes from "Field Notes for Food Adventure." These sweet potatoes topped with maple syrup-glazed pecans would be the perfect addition to your holiday table.

Brad: I have nostalgia in my heart for sweet potatoes. My mom made them every week, along with meatloaf. Everyone likes them, from kids to old cranky people—kind of like maple syrup.

Sweet potatoes do have a little natural sweetness, but they're also quite earthy and savory. Maple syrup highlights those flavors, but even with the nuts and butter, this does not come across as a dessert. It could be a simple vegetarian meal or a side dish to something like roasted monkfish tail. Go ahead and load it up with other stuff—what's great about sweet potatoes is their versatility.

People freak about how long to cook steak or potatoes, but listen, we're not building a rocket engine here. If your potatoes aren't cooked through at 40 minutes, let 'em go for longer. They're done once a cake tester pushes easily through them

Directions
Preheat the oven to 375°F. Wrap the potatoes in foil with a little bit of water trapped inside. Place on a sheet pan or directly on the oven rack and bake until soft and liquid begins to caramelize in the foil. This will take a good 40 minutes or more depending on the potato.

In a small saucepan, melt the butter and add the pecans, allowing them to get toasty and bloom in the butter for a couple minutes. Add the maple, cinnamon , and cardamom. Cook over low heat until the nuts are loosely glazed.

Mix together the sour cream and lemon juice. Season with salt and some pepper.

Split the roasted potatoes and spoon the pecan mixture over them. Spoon a little sour cream mixture on top. Sprinkling on some chives wouldn't hurt you.

Excerpted from "Field Notes for Food Adventure" by Brad Leone. Copyright © 2021 by Brad Leone.
Used with permission of Voracious, an imprint of Little, Brown and Company. New York, NY. All rights reserved