These undemanding green beans have so much to offer our dinners — anytime, but doubly so at a holiday feast 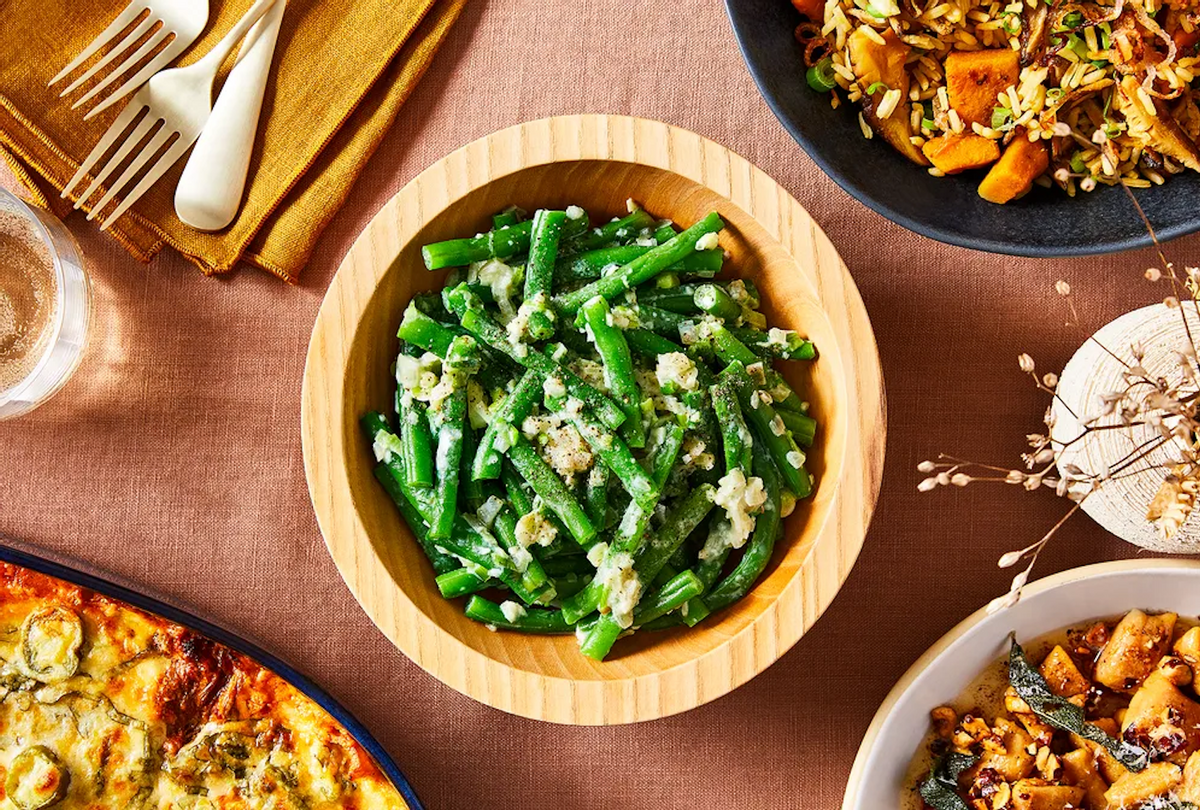 These undemanding green beans have so much to offer our dinners — anytime, but doubly so at a holiday feast: They're a little creamy yet vibrantly green, deeply savory yet superfast to make, and so make-ahead-friendly that they require no more than five minutes in a single skillet before dinnertime, leaving the oven free for roast beasts and pies and whatever other casseroles you want to jigsaw in there.

But what really got me was the milk.

The original recipe, from the chef and historian Dr. Maricel Presilla, calls for dairy milk, but she would encourage us to use all sorts, from almond to coconut to Lactaid to A2.

Maricel first encountered this technique in the kitchen of an octogenarian family friend named Angelica Laperira in the town of Remolino in Colombia, early in the 30-plus years Maricel spent traveling and researching for her cookbook opus, Gran Cocina Latina. "The beans are so green, they have a crunch, and the milk is like a beautiful blanket that does not overwhelm," Maricel told me in this week's episode of The Genius Recipe Tapes (1).

She was delighted to see the care Angelica put into blanching green beans to harness their bright color and crunch — not common in Latin American green bean dishes, but dating back in Angelica's family to at least the 19th century. And at once, Maricel could see how this simple dish illustrated the deep roots of Latin American cooking — both the green beans that were indigenous to the Americas, and the medieval technique of cooking in milk, still seen in everything from milky soups like changua in Colombia and pisca andina in Venezuela, to the cheesy papas chorreadas served alongside meaty dishes at restaurants in Bogotá.

Angelica's care and technique also happen to make the recipe ideal for making ahead, for a small gathering all the way up to restaurant-scale. The green beans can be trimmed and blanched in batches earlier in the week. Even the sofrito — in this instance, a deeply savory, three-allium base of white onion, scallion, and garlic — can be prepped ahead, too.

And then, whenever you're ready to serve — you're nudging people toward the table, someone is carving the roast beast — you quickly sizzle the sofrito, tumble in your blanched beans, and don'tmake a flour-thickened cream sauce or track down a can of cream of mushroom soup or do any other backflips. Instead, open the fridge and splash in some milk to bubble down and carry the sofrito into a very light, very flavorful swaddle to hug the beans.

So many other cookbooks and teachers have trained me to fear letting milk boil, and it turns out I really shouldn't. For one thing, milk is much more stable than I'd ever given it credit for. As you can see in the video above, you can let milk simmer for a good while without it breaking, as long as there isn't a strong acid present (then, it's definitely turning to cheese). And for another, even if it did boil to its breaking point — what could be wrong with cheese? Curds are delicious. Whey is delicious. "I'm not afraid with milk," Maricel told me.

With this freedom, thanks to Maricel and Angelica, the joys of creamy sauces no longer require commitment or heft. They can happen anytime — Thanksgiving or tonight — and be as light and flavorful as we want them to be.

(1) For those of us in need of a pick-me-up, Maricel also told me the most heartwarming holiday love story I've ever heard (starring her husband Alejandro, below) in this week's episode of The Genius Recipe Tapes — I highly recommend giving it a listen.