A Thanksgiving hunt to remind ourselves that dinner means death

Despite attempts to distance ourselves from the brutal realities of nature, survival remains a serious business 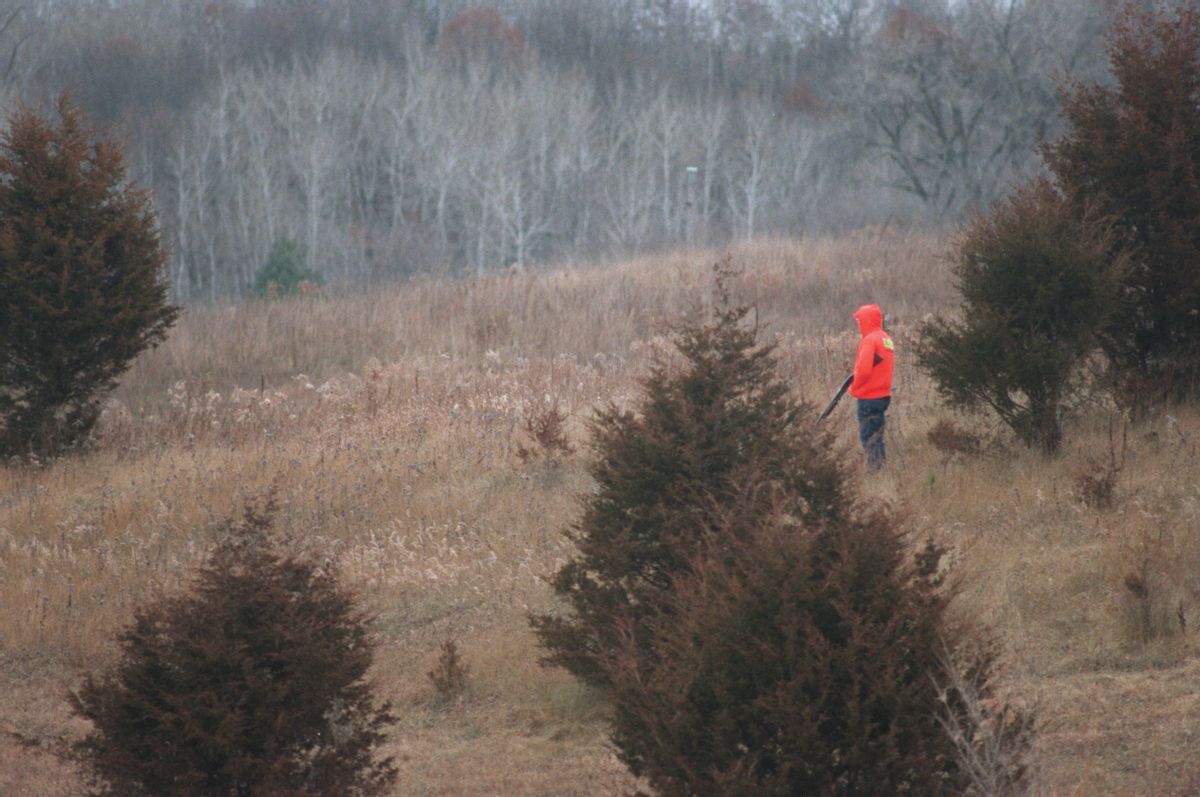 A hunter stands motionless as he waits for a deer to come into shooting range. (JOHN CROFT/Star Tribune via Getty Images)
--

My grandmother, God rest her soul, used to tell a story every year around Thanksgiving. It was a holiday that, for a woman who spent most of her life in rural Wisconsin, became almost one in the same with the state's simultaneous nine-day deer hunting season. I can attest that our family still very much feels that way today.

As the tale goes: My grandfather, a dairy farmer in central Wisconsin who sadly died before I had much of a chance to get to know him, was — to put it charitably — poor. So poor, in fact, that one year, in the face of rising ammunition prices, he decided that he could not justify buying a box for the upcoming hunting season. Instead, he set out into the woods opening morning with three bullets he was able to scrounge up from the bottom of a drawer, knowing that he had three shots to bring home food for his family to eat during the winter months. They ate well that year, or so I'm told, after he brought home three deer — one shot, one kill for each.

I can't quite attest to the veracity of the story, but as with any outdoorsman's tale, it's important to pay attention to the broad strokes over the details: Our family was poor, and he was a great hunter. When I asked my mother about it, she confirmed one key detail: just about the only meat she and her siblings ate during the winter months was venison. "We almost never had beef," she declared, as it was too expensive to buy at the store and too costly to butcher one of their own cattle — the animals' milk provided for the vast bulk of the family's livelihood, after all.

Deer, however, were a sustainable food source growing right outside that my grandfather could rely upon whenever needed (or whenever money ran tight).

"He hunted every month with an 'R' in it," my mother said wryly when I asked her about it. That left the spring and summer open for turkey, fish and other assorted game meat. But venison always held a special place in his heart, from what I understand.

I think about that story every year as I pack up every piece of orange clothing I own and head back to that farm, which is now run by my uncle, for Wisconsin's annual deer hunting season. Though some things have changed — we're a little more inclined to follow state hunting regulations now, for instance — so much has also stayed the same.

We are, of course, no longer reliant on the spoils of our hunt. Globalization and wide-scale factory farming have made meat of all kinds — really, food in general — cheaper and more available to Americans across the board, and my family is no exception. Despite this, fresh venison is still a family staple we enjoy during Thanksgiving week and something I look forward to every year.

Opening day of this season broke clear and warm last Saturday, with the sunrise sending jagged lines of light across the same central Wisconsin woods where my grandfather hunted all those years ago.

It's a familiar ritual by now: walking slowly through frozen alfalfa fields in the dark, testing the wind, then waiting still and silent for the sun to rise just enough to give the shadows shape. Some mornings, the shrill yip of coyotes can still be heard on the horizon, impossible to place.

Most of the hard work has been done for us, as generations of our family have painstakingly mapped out the local herd's wandering routes. One group of animals likes to cut up from the land of a neighboring Mennonite family — members of a particularly fundamentalist Christian sect whose numbers seem to grow every time I return — and across a maple grove that my cousin has in recent years begun to tap for syrup.

From there, the deer hug a coulee that follows the route of a creek, twisting and turning through another patch of forest before crossing a pockmarked cattle lane that provides an especially fruitful shooting path — clear of brush, with just enough distance that the deer seem to reliably appear regardless of which way the wind is blowing.

Others cut through the property's back field, running for half a mile across a ridge that allows them to see in all directions. Great visibility, but a tough shot; it's an ill-advised tactic to fire over any land feature because there's no accounting for where the bullet may go if you were to miss.

Hunters will say they're always heartened to hear the cacophony of gunfire at sunrise — it's as good a sign as any the deer are moving, even if you haven't seen anything yet. Opening morning dawns and wanes without any action, but the sound of shots all around gives us hope: there's something out there. And when times are desperate, the desperate do a "drive." 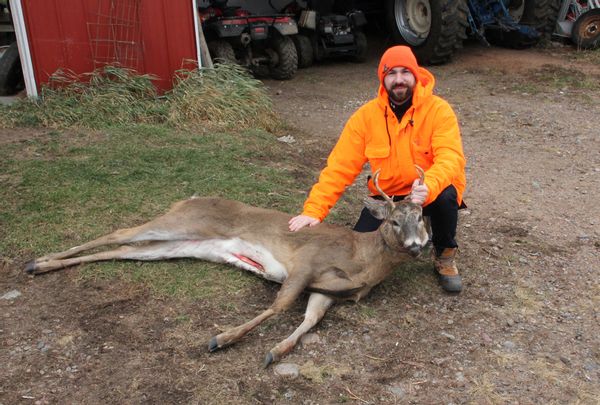 The author with the fruits of his hunt. (Photo by Brett Bachman)The deer drive is more art than science, a risky maneuver that almost guarantees you'll see something but lessens the chances for a clear shot at a stationary animal quite significantly. It's a relatively simple concept: send several people through a patch of woods in one direction to scare any deer resting in the area, and strategically place several more along the animals' favored escape routes to catch them as they run past.

Saturday, we choose a small patch of oak bordering a horse pasture owned by an elderly, distant relative who has offered up the location with the stipulation that he be given premium placement in a roughshod stand, sitting above a marsh tangled with cordgrass that had recently been ransacked by what appears to be a family of raccoons. I stand with another cousin along a fence line overlooking the wetland's southern edge, staring into a patch of brush that in past years has proven to be a reliable exit path for scared deer.

Sure enough, after nearly a half-hour of scanning the tree line, we spot them: three flashes of white bobbing through the brush, one buck and two small does.

Nearby, a blast shatters the still air, and I try to get one of the fleeing animals within my sights. No luck. We watch the tree line for another 10 minutes or so, expecting to see the telltale orange clothing of our comrades. Instead, my cousin waves toward a tangle of downed hardwoods, where I can make out the faint outline of antlers. Another blast, and one more flash of brown rockets past me about 20 yards out. I wheel around and fire off a last-chance shot, not realizing how loudly my heart is pounding until after the deer falls.

It's a buck — a small buck, technically five points, but enough to feed myself several times over. I hear a cheer from the woods, as well. Another deer is down, this one a large eight pointer. "I just love it when a drive comes together," my uncle says, beaming. Back at the truck, someone cracks a beer. We all bask in the warmth of a successful day — though the work of getting this animal onto our plates is only just beginning.f

I am, by all accounts, a bona fide city boy now. I live in Brooklyn, and I work almost exclusively on a computer. It's a long shot from the backwoods of my youth and even further from the dirt-road life my grandfather led — but it's exactly this connection to the land that brings me back each year and keeps me sitting in the cold for hours on end, waiting for that little flash of movement that has the potential to stock my freezer for months on end.

In all, this year brought three deer for our family to butcher and another two whose owners chose to send it in for professional handling — a smashing success, given that some years we struggle to even lay eyes on anything. Before the job, we treat ourselves to a breakfast of venison steak, rare, and a pair of runny eggs each. The rest is bloody, cold work, good for reminding you that despite humanity's attempts to distance ourselves from the brutal realities of nature, survival remains a serious business.

My friends in the city tend to treat this obsession with equal parts fascination and bewilderment. "Don't you feel bad?" one asks. "I could never kill something," another says definitively.

I've been inside slaughterhouses and consider me, well, unconvinced by any of the arguments that pulling a trigger is somehow worse than buying packaged meat at a store. None of the avid hunters I know feel sunny when their quarry goes down — but it's important to remember that, for those of us who haven't sworn off meat for good, dinner almost certainly involves death. It's natural, after all — humans have hunted for millennia. As Sitting Bull said: When the buffalo are gone, we'll hunt for mice.

It's in our blood.