Florida Sen. Rick Scott off base in claim that rise in Medicare premiums is due to inflation 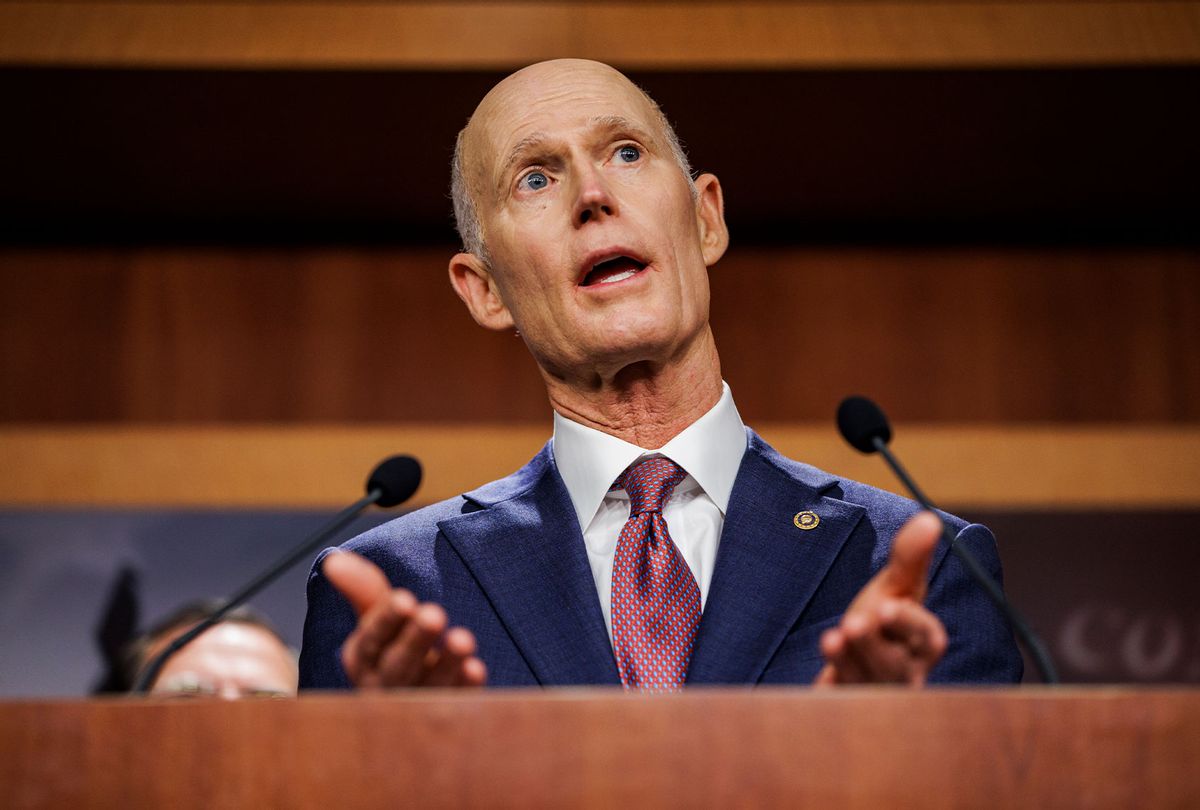 Republicans blame President Joe Biden for this year's historic surge in inflation, reflected in higher prices for almost everything — from cars and gas to food and housing. They see last month's 6.2% annual inflation rate — the highest in decades and mostly driven by an increase in consumer spending and supply issues related to the covid-19 pandemic — as a ticket to taking back control of Congress in next year's midterm elections.

A key voting bloc will be older Americans, and the GOP aims to illustrate how much worse life has grown for them under the Biden administration.

Sen. Rick Scott (R-Fla.) issued a press release Nov. 16 suggesting that rising general inflation was behind the large increase in next year's standard premiums for Medicare Part B, which covers physician and some drug costs and other outpatient services.

"Sen. Rick Scott: America's Seniors Are Paying the Price for Biden's Inflation Crisis" was the headline. The senator's statement within that press release said, "We need to be LOWERING health care and drug prices and strengthening this vital program for seniors and future generations, not crippling the system and leaving families to pay the cost." The press release from Scott says he is "slamming Biden's inaction to address the inflation crisis he and Washington Democrats have created with reckless spending and socialist policies, which is expected to cause significant price increases on [senior] citizens and Medicare recipients." Scott's statement in that same press release also says the administration's "reckless spending" will leave U.S. seniors "paying HUNDREDS more for the care they need."

We wondered whether these points were true. Was the climbing annual inflation rate over the past several months to blame for the increase in Medicare Part B premiums?

We reached out to Scott's office for more detail but received no reply. Upon further investigation, we found there is little, if any, connection between general inflation in the past few months and the increase in Medicare Part B premiums.

What's the Status of Medicare Premiums?

Medicare Part B premiums have been growing steadily for decades to keep up with rising health spending.

The U.S. inflation rate, for years held at bay, has been above 4% since April, hitting 6.2% in October, the highest rate in decades.

On Nov. 12, the Centers for Medicare & Medicaid Services announced that the standard monthly premium for Medicare Part B would rise to $170.10 in 2022, from $148.50 this year. The 14.5% increase is the largest one-year increase in the program's history.

CMS cited three main factors for the increase: rising health care costs, a move by Congress last year that held the premium increase to just $3 a month because of the pandemic, and the need to raise money for a possible unprecedented surge in drug costs. Inflation was not on that list.

In fact, half of the premium increase was due to making sure the program was ready in case Medicare next year decides to start covering Aduhelm, a new Alzheimer's drug priced at $56,000 per year, per patient. It's been estimated that total Medicare spending for the drug for one year alone would be nearly $29 billion, far more than any other drug.

How Big a Hit Will Seniors Feel?

The Part B premium is typically subtracted automatically from enrollees' Social Security checks. Because Social Security recipients will receive a 5.9% cost-of-living increase next year — about $91 monthly for the average beneficiary — they'll still see a net gain, though a chunk will be eaten away by the hike in Medicare premiums.

Some Medicare beneficiaries won't face a 14.5% increase, however, because a "hold-harmless" provision in federal law protects them from a decrease in their Social Security payments. But that rule won't apply for most enrollees in 2022 because the increase in their monthly benefit checks will cover the higher monthly premium, said Juliette Cubanski, deputy director of the program on Medicare policy at KFF.

What Role Does Inflation Play?

Several Medicare experts said the spike in the general inflation rate has little or nothing to do with the Medicare premium increase. In fact, Medicare is largely immune from inflation, because the program sets prices for hospitals and doctors.

"This is so false that it is annoying," Paul Ginsburg, a professor of health policy at the Sol Price School of Public Policy at the University of Southern California, said of Scott's claim that general inflation is behind the premium increase. "The effect of the inflation spike so far on prices is zero because Medicare controls prices."

Medicare Part B premiums, he said, reflect changes in the amount of health services delivered and a more expensive mix of drugs. "Premiums are tracking spending, only a portion of which reflects prices," Ginsburg said. "I can't see that the administration really had any discretion" in setting the premium increase due to the need to build a reserve to pay for the Alzheimer's drug and make up for the reduced increase last year, he said.

Stephen Zuckerman, co-director of the Urban Institute's health policy center, said a rise in wages caused by inflation could spur a small boost in Medicare spending because wages help determine how much the program pays providers. But, he said, such an increase would have to occur for more than a few months to affect premiums. Continued soaring inflation could influence 2023 Medicare premiums, not those for 2022. "The claim that premium increases are due to inflation in the last couple of months doesn't make sense," Zuckerman said.

CMS faced the challenge of trying to estimate costs for an expensive drug not yet covered by Medicare. "It is a very difficult projection to make, and they want to have enough contingency reserved," said Gretchen Jacobson, a vice president of the nonpartisan Commonwealth Fund.

Scott said in a press release about the 2022 increase in Medicare Part B premiums that "America's seniors are paying the price for Biden's inflation crisis."

Though his statement contains a sliver of truth, Scott's assertion ignores critical facts that create a different impression.

For instance, Medicare policy experts said, current general inflation has little, if anything, to do with the increase in premiums. CMS said the increase was needed to put away money in case Medicare starts paying for an Alzheimer's drug that could add tens of billions in costs in one year and to make up for congressional action last year that held down premiums.

We rate the claim Mostly False.

Telephone interview and emails with Juliette Cubanski, deputy director of the Program on Medicare Policy at KFF, Nov. 24, 2021.

Telephone interview with Stephen Zuckerman, co-director of the Health Policy Center at the Urban Institute, Nov. 19, 2021.

Telephone interview with Paul Ginsburg, professor of health policy at the Sol Price School of Public Policy at the University of Southern California, Nov. 18, 2021.

Telephone interview with Gretchen Jacobson, vice president of the Medicare program at the Commonwealth Fund, Nov. 18, 2021.

AARP blog about the biggest-ever increase in Medicare Part B premiums, accessed Nov. 18, 2021.

KFF brief on the impact Aduhelm could have on Medicare costs, accessed Nov. 18, 2021.