The absolute best way to cook potatoes, according to so many tests

Ranked from "Most Forgettable" to "Potatoes We’d Like to Marry" 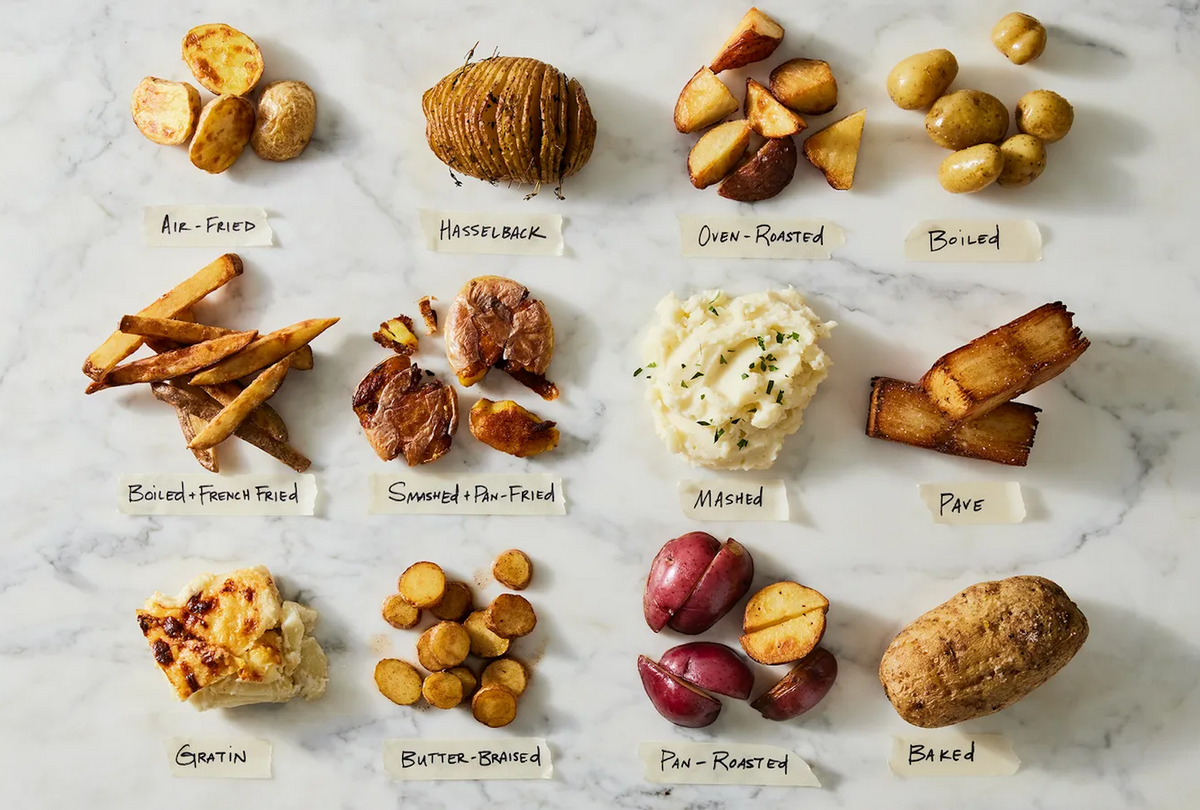 In Absolute Best Tests, our writer Ella Quittner destroys the sanctity of her home kitchen in the name of the truth. She's boiled dozens of eggs, seared more porterhouse steaks than she cares to recall, and tasted enough types of bacon to concern a cardiologist. Today, she tackles potatoes.

I don't mean to alarm you, but Gen Z has discovered potatoes.

Several hundred years after Spanish conquistadors brought the tubers back across the Atlantic from South America, our youthful brethren have bravely carried the very same taters from the pages of fusty French cookbooks to the digital paper of record: TikTok.

I am talking, of course, about "15-Hour Potatoes." A 15-Hour Potato may be better known by its French moniker, the pavé. It is a dish of shingled, slow-cooked potatoes pressed into a terrine, then sliced and fried. It requires patience, two loaf pans, quite a few heavy cans, and goddamn, is it delicious.

Unfortunately for my landlord, it was just one of 12 methods I tested for my latest round of Absolute Best Tests. I baked and I fried. I boiled and I prodded. I nibbled, I salted, and I pavéd and pavéd, till I fell asleep at the dining room table. Behold:

For the most accurate comparison across methods, and also because I ran out of pepper, I stripped all seasonings away from the methods, except for salt (I used Diamond Crystal kosher salt), butter, olive oil, and in a few cases, key staple ingredients (e.g., the cheese and dairy in the gratin).

I will preface this section with the disclaimer that there is no such thing as a completely bad potato. There are, however, lackluster potatoes, and there are potatoes so crisp-gone-melty they could launch ships, etc., etc. Accordingly, I have ranked the preparations I tested in ascending order, from "Most Forgettable" to "Potatoes I'd Like to Marry":

These potatoes got much crispier than I expected, though the texture of their insides was not my favorite of the bunch. It was reminiscent of the stovetop seared batch, though a hair tougher, because the air-fried potatoes never got steamed. In a pinch, I would use this method again, if I had limited stovetop and oven space and I simply needed some crispy Ps STAT.

From Food Network and Serious Eats.

A baked potato is what it is. And what it is is the perfect vehicle for creamy, acidic, and texturally contrasting toppings. It's also the perfect vehicle for pretending your fork is a miniature snowplow and the potatoey innards are a troublesome highway. Would I make a baked potato again? Of course. Can I pinpoint a scenario in which it would be better than any of these other potato preparations? Just the snowplow thing.

Hasselback potatoes are a fun party trick and little more, unless you plan to stuff them with herbs and cheese, in which case why not just gratin? And if you don't plan to stuff, may I IMPLORE YOU to boil and roast?

Look, we're all thinking it: Pan-roasted potatoes are underwhelming. It's true that the method — which calls for just one skillet and one stage of cooking — is lower key. But at what cost? The potatoes weren't quite as tender as most of the other specimens, and while they were deeply browned on some façades, other sides were pale and puckered. Also, steaming the potatoes after the initial browning meant that despite appearing to wear tiny jackets of crunch, the little potato pieces actually turned out quite soft.

That said, a self-described "big breakfast person" did walk through the room and pop several of these into his mouth, declaring them "absolutely perfect," so I would keep this method in my back pocket for mornings when I need something quick and simple to accompany eggs. But I would add an additional crisping phase after the steam.

I suspect a butter-braised shoe would be fantastic, so yes, butter-braised potatoes were really excellent. I was surprised they cooked all the way through in the short time they were searing, making them one of the more efficient methods on the list. They were beautifully caramelized on several sides, though the moisture of the butter bath did sap some of their crunch. They tasted as if purée de pommes de terre were a solid. They'd be wonderfully over the top with a bit of crunch added, like bread crumbs or bacon. Yes, potatoes boiled in salty cream and butter then baked with cheese are really fucking good. NEXT QUESTION, YOUR HONOR?

I will go on record saying boiled potatoes are underrated. This would be a hot take if it weren't so boring. Boiled potatoes do have a lot to offer, though — their starch has been drawn out, but not yet transformed into a crispy shell, or mashed into a velvety glue, so you can use it to absorb lots of flavor, like olive oil, lemon juice, and fresh herbs. They are also criminally easy, delightfully savory, and beg to be popped into your mouth one by one like grapes.

You know them, you love them, you stare straight at them when your anti-vaxxer uncle's asking why you're still single. Mashed potatoes, the only universally cool thing about Thanksgiving, are always decent, even when they're only OK. Nora Ephron once wrote, "Nothing like mashed potatoes when you're feeling blue. Nothing like getting into bed with a bowl of hot mashed potatoes already loaded with butter, and methodically adding a thin cold slice of butter to every forkful." Agree! Though she went on to say that they're just as much work as crisp potatoes, which is where we diverge. I think mashed potatoes are virtually effortless relative to crispy boys, if you know to 1) salt your water, 2) skip the food processor, and 3) mash in ample butter, salt, and cream. Bonus points for frizzled leeks. This method is a great shortcut for crispiness when you don't have time (or the sheet pan-age) to boil and THEN oven roast, with similar results. Flattening each boiled potato for an increased surface area means more crisp and less creamy interior, in the time it takes to brown each side in a roaring hot skillet. Sign me up, baby!!!! (But to be clear, don't sign me up if I have time to do the boil and roast method instead, which I liked better.)

This boil and fry method was the winner from my recent investigation into the best way to make French fries, and I still stand by it to produce salty, crunchy, pleasantly tart FFs. It's definitely one of the most labor-intensive ways to prepare potatoes, but you know what they say: A mayo-based sauce a day keeps Ella's depression at bay.

2. Pavé, aka Stacked and Fried

The girl you want to hate but can't 'cause she's sooooooooo crispy and creamy and tastes like a hash brown mated with a crinkle cut fry. A huge amount of work, but well worth it in the right conditions. Alright TikTok, you win — this time.

Holy hell, these potatoes are outrageous!!! They have approximately 5 billion legs up on your standard roasted Ps because the little potato chunks get boiled in super salty water before they're oiled up and tossed into a hot oven like a hog in heat (that's definitely not a thing I'm just so FIRED UP from these POTATOES). This boiling step both flavors the potatoes and draws out a thick layer of chalky starch that hardens into a suit of shattery armor for each tiny tater. Even with just salt and olive oil as seasoning, they tasted like the best version of fast food hash browns. They called for ketchup like my lungs call for air, like a cat mews for milk, like my Absolute Best Tests narration calls for human company and/or psychiatric intervention.