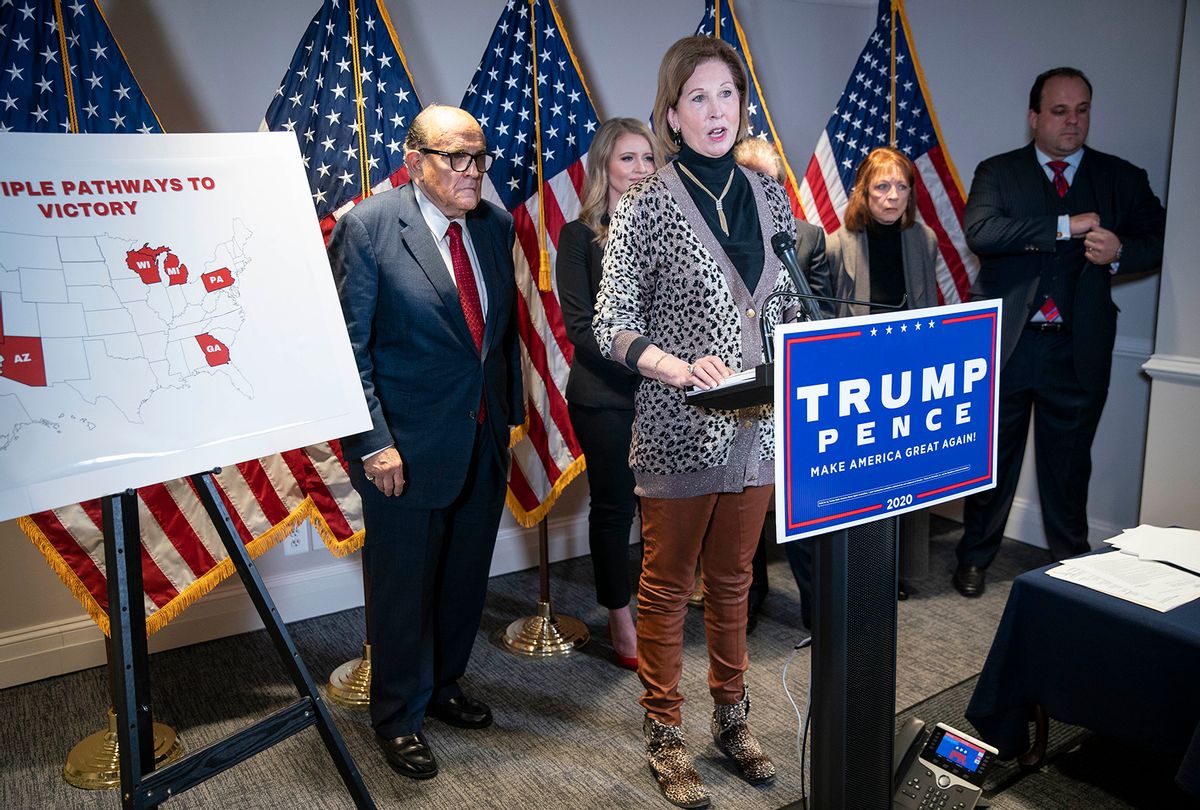 Attorney Sidney Powell speaks during a news conference with Rudy Giuliani, lawyer for U.S. President Donald Trump, about lawsuits contesting the results of the presidential election at the Republican National Committee headquarters in Washington, D.C. (Sarah Silbiger for The Washington Post via Getty Images)
--

A federal grand jury has found evidence that Sidney Powell, a former lawyer for ex-President Donald Trump, filed false incorporation papers for a Texas based non-profit called Defending The Republic, The Guardian reported on Friday.

The U.S. Attorney's office for the District of Columbia issued Powell a grand jury subpoena back in September to look into the alleged fundraising fraud, according to The Washington Post. Federal prosecutors requested communications and other documents dating back to Nov. 1, 2020, related to the fundraising and accounting for organizations led by Powell, including DTR and a political action committee by the same name.

Specifically, the incorporation papers for DTR listed two men as members of the organization's board of directors — despite evidence indicating that neither authorized Powell to do so — in an apparent effort to attract donors. According to the paperwork, the board consisted of Powell herself, Georgia attorney Linn Wood and Brannon Castleberry, a Beverly Hills-based businessman and consultant, The Guardian reported.

While this discovery points to possible fundraising fraud, federal prosecutors are looking into several other aspects of the organization to determine just how deep Powell's alleged falsification goes.

In the ongoing inquiry, investigators are trying to ascertain if Powell diverted funds from the organization for personal use – including on a defamation case brought against her by election technology company Dominion Voting Systems and one of their former employees. They are also looking into whether she may have deceived donors by falsely claiming that their donations would be directly used to finance lawsuits filed by Powell, as the private attorney to former president Donald Trump, in an attempt to overturn the 2020 presidential election. All of her suits not only failed, but drew harsh criticism from the sitting judges, one of whom went so far as to sanction her for alleged ethical misconduct and refer her to the Texas State Bar for investigation.

Moreover, out of the series of lawsuits she filed nationwide, investigators found only one single instance in which DTR funds were used to finance an election case, according to the Guardian.

Powell rose to prominence as the promulgator of several election-related conspiracy theories, including the false claim that the 2020 election was conducted illegitimately or the evidence-free narrative that the FBI tried to frame Trump for the Jan. 6 Capitol riot in an attempt to oust him from office.

And in addition to the Texas bar's inquiry into Powell for making statements promoting false conspiracies in federal courts, she is currently facing another legal predicament: On several occasions, Powell has claimed that individuals served as co-counsel or even plaintiffs in federal cases without requesting their permission to do so. These people often only found out once the cases were already filed, the Guardian discovered.

These alleged misrepresentations may also come back to bite Powell in her DTR fraud case as well, after claiming to potential donors that the attorneys in question were central to an "elite strike force" that would succeed in overturning the results of the 2020 election, despite the lawyers' minimal involvement in the cases at hand.