I’m a philosophy professor. The argument for making abortion illegal is illogical 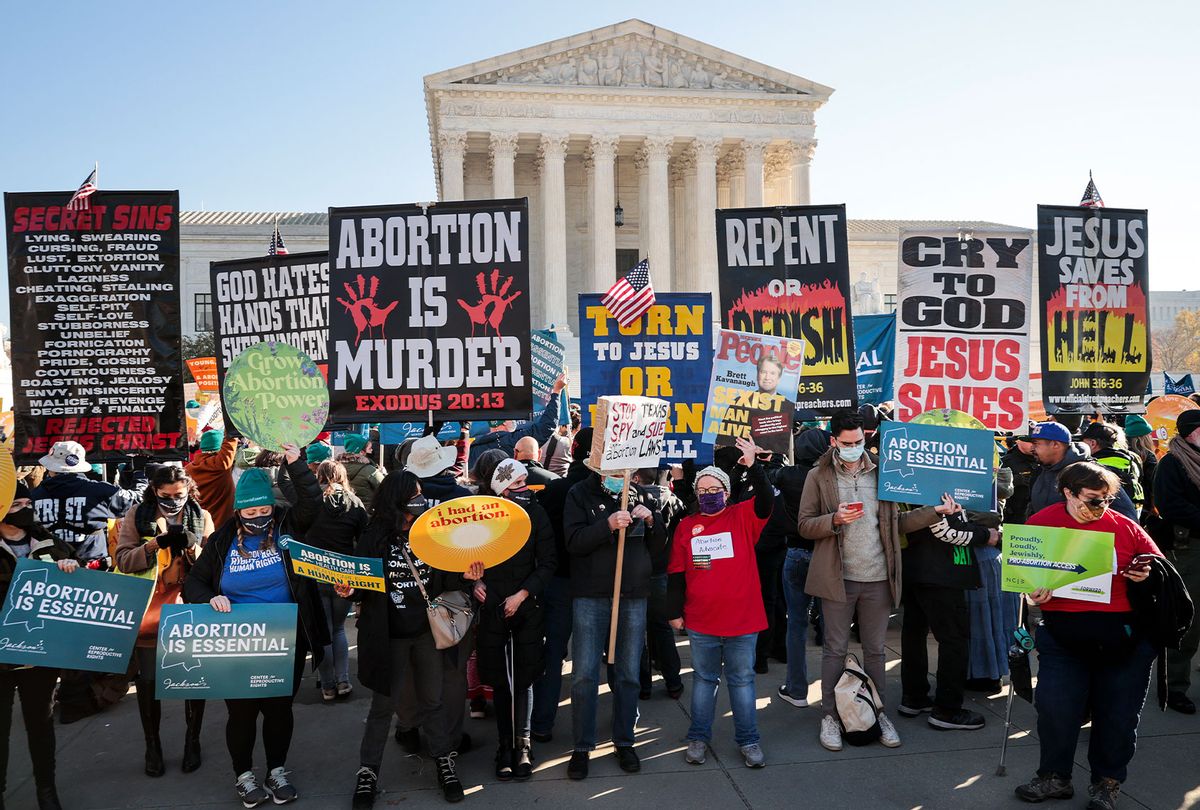 Demonstrators gather in front of the U.S. Supreme Court as the justices hear arguments in Dobbs v. Jackson Women's Health, a case about a Mississippi law that bans most abortions after 15 weeks, on December 01, 2021 in Washington, DC. (Chip Somodevilla/Getty Images)
--

As a philosophy professor who teaches logic and critical thinking — the study of good and bad arguments and forms of reasoning — I have been a keen observer of the arguments given for and against making abortion illegal or otherwise restricting abortion.

Obviously, this is of vital importance at this moment in history: the Supreme Court is expected to issue a ruling in the summer that could restrict or ban abortion across much of the United States.

Unfortunately, both sides tend to have poor arguments for their views. Seeing why this is might help lead our society to better arguments, which might contribute to social and political progress on the issue.

To see why many arguments here are bad requires going back to class for the basics of what an argument is. The textbook example of an argument — a conclusion supported by a premise or premises — looks like this:

The connection between the premise and the conclusion here might seem obvious, but this is because we are assuming, without saying, this premise, which is essential to the argument:

All men are mortal.

Adding this unstated premise makes the argument what's called "logically valid": it completes the reasoning. Adding premises like these, so the full structure of an argument is stated, is key to seeing why many arguments about abortion are bad arguments.

First, the issue of abortion is often framed in terms of "life": when does "life" begin? Indeed, most anti-abortion organizations have "for life" in their very names.

But a core activity of critical thinking involves defining terms. So what is meant by "life?"

One clear answer is biological life: being engaged in the biological processes that define life.

All biological life is wrong (or typically wrong) to kill.

Mold, plants, bacteria, fungi, cancer cells, and more are all "life" — they are all biologically alive — but they aren't wrong to kill.

Here a pro-life advocate is apt to say that what they mean is not merely "life" in a general, abstract sense, but specifically human life.

But, again, what does "human" mean?

Now a pro-life advocate will insist that what they really mean is that fetuses are, like us, biologically human organisms — we're not just "clumps of cells" — or human beings or human persons. Since we are all this, and it is typically wrong to kill us, so it would be the same with killing fetuses — since there are no important differences between us and human fetuses, they claim.

Ross Douthat argues this in his recent New York Times article, "The Case Against Abortion." He observes that differences in "reasoning capacity or self-consciousness" and "capacity for survival and self-direction" are not viable differences between us and fetuses, since many born human beings lack these, yet still are persons with basic rights.

Critical thinking, however, requires considering all the relevant explanations, and Douthat overlooks the perhaps most obvious one: born human beings — adults, children, babies, and people who are severely cognitively challenged — are, unlike embryos and beginning fetuses, all conscious, sentient beings with a perspective on the world that can go better and worse for them. This is why we are persons who deserve the protections that rights provide: to personify something is to attribute a mental life to it, and these facts about our minds are the basis for the leading explanations of why we have human rights.

Reflecting on what makes us have basic rights helps us see that there are indeed relevant differences between born human beings and fetuses, and so it's plausible to think that we are persons with moral rights — while  embryos, and at least first-trimester fetuses, are not.

Fetuses are, however, potential persons, with the potential for rights. But are we always morally obligated — are women and girls obligated — to assist anything and everyone in reaching their potentials? No.

Pro-choice advocates often focus on the need for abortion so that women and girls might seek their own potentials and have an equal opportunity, compared to men, to pursue their goals and dreams in life. Pro-life advocates respond that if a woman wanted to kill her children so she might "get ahead" in life, that would be wrong.

That's correct, but anti-abortion advocates simply do not have a good argument that embryos and fetuses really are "children" or "babies" — categories of human persons with the right to life. Fetuses are alive and biologically human — nobody should deny that (although some apparently do) — but, despite those similarities to us, they are not persons with the right to life. And so abortion, at least early abortions, most abortions, are not murder.

Pro-choice advocates often observe that nobody has a right to anyone's else's body, and so conclude that fetus does not have a right to the woman's assistance and so abortion is justified. This insight, however, denies the fact that we can be morally required to assist people, using our bodies, even though that someone has no literal right to assistance.

Although sometimes we really must be Good Samaritans, many "pro-life" advocates seem to deny this when they reject efforts to help people even in ways that would reduce the number of abortions. But Good Samaritanism involves helping someone, helping a person, and so isn't relevant to most abortions: nobody is obligated to assist something that's not a person, and not even yet person-like, and the state certainly should not criminalize anyone refusing to provide that type of assistance.

We haven't reviewed all the arguments on abortion here, of course, but the most common and often-heard arguments for making abortion illegal on the grounds that it is murder are demonstrably weak. Given that, abortion should be and remain legal, as it has been for nearly 50 years. That's the logical response.