The Pleasures of Cooking launched when the food processor was a novel device. Now, it's a collector's item 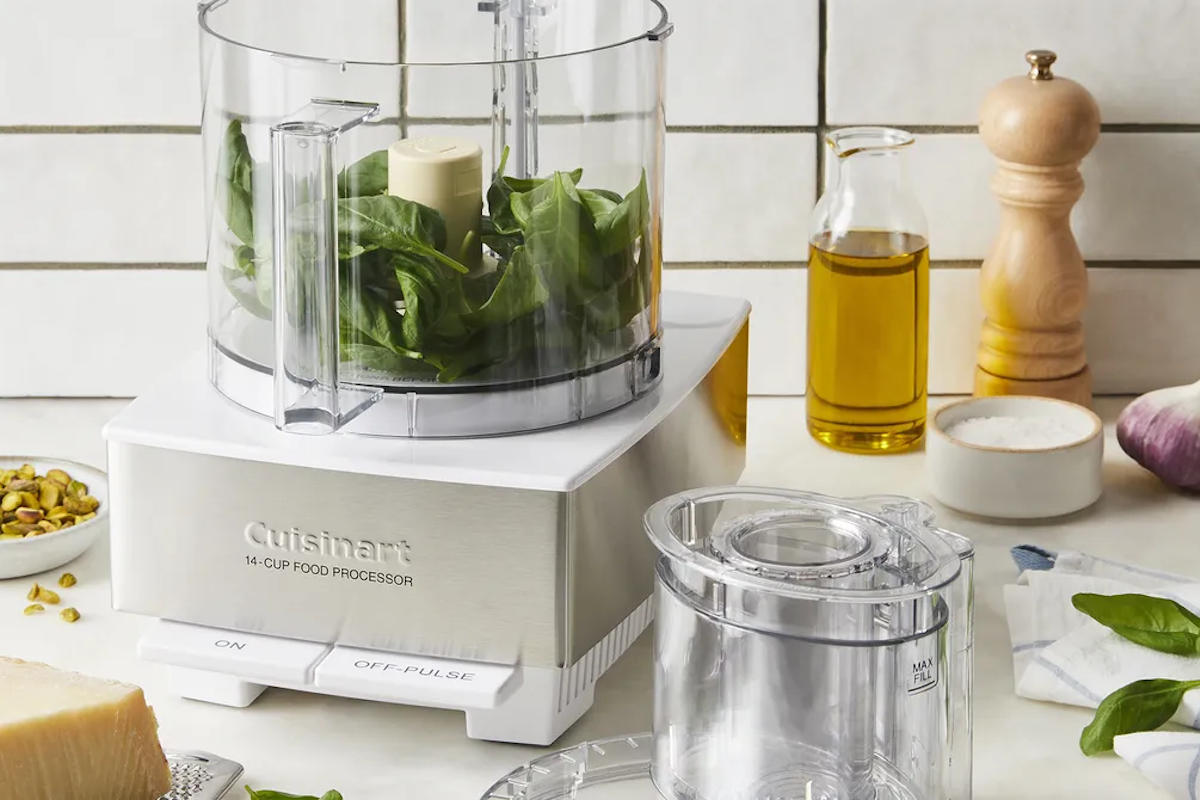 Over breakfast some months ago, my friend Ina Pinkney, former chef-owner of iconic, bygone Chicago breakfast restaurant Ina's, pressed a small stack of Cooking magazines into my arms. Each 52-page issue, published by Cuisinart, bore a simple, stylized food image on its cover: a bright-red apple, a canelé framed with mistletoe, a wooden forkful of fresh pasta.

"I lived for these magazines," she sighed. "I would sit down, read the whole thing, and want to make everything in there."

Why? I wondered at first, when it was created by a brand in 1978 in the service of selling its then-new food processor? But as I flipped through the ad-free, 5½-by-8½-inch pages of Cooking (eventually titled The Pleasures of Cooking), I saw what Ina meant.

Cooking's star-studded lineup of contributors shared tips on using the food processor in new ways, like making pie crust or whipping up hollandaise (contributor Carl Jerome, James Beard's assistant in the 1970s, suggested tilting the machine on a 2-inch-thick book, which Ina denoted with a "!" in green marker). In another issue, chef and food writer Abby Mandel — whom James Beard would later affectionately dub the "Queen of Machine Cuisine" — prepared a Middle East–accented French dinner of gougères, courgettes aux fruits de mer, and lamb skewers, making use of every possible setting, speed, and blade. Jane Salzfass Freiman was hired to make public demonstrations and appearances with the machine. Yet this large-format, small-volume cooking magazine somehow added up to more than just 50-odd pages of celebrity-chef-endorsed advertorials. Or maybe I'd been sucked in, too.

"I feel that in general, the discussions in The Pleasures of Cooking and the different people who wrote for it really reflected the world of food at that time in the United States better than any other publication," said Pépin, who wrote regularly for the magazine, during a recent phone call. "I don't recall that we got paid very much, but we all liked it. There were no advertisements, so we didn't have to cower to sponsors. It was serious cooking, and it was the way we wanted it."

Cooking published for almost 10 years, amassing some half a million subscribers and helping reshape American cooking for decades to come. It traces its origins to a certain retired MIT-trained physicist, inventor, and amateur gourmet named Carl Sontheimer, who developed the Cuisinart food processor in 1971.

Renowned Indian cuisine ambassador Madhur Jaffrey penned a 12-page recipe feature celebrating the summer foods of India — from Moghlai biryani and Hyderabadi-style stewed tomatoes to calf brains in spicy sauce based on siri paya. Jacques Pépin shared the origins of his storied career apprenticing at the Grand Hôtel de l'Europe in Bourg-en-Bresse, France, at age 13. Food writer Barbara Kafka unpacked the historical context and social meaning of the cultural phenomenon of elective vegetarianism. A piece on seven Italian soups by Italian cooking legend Marcella Hazan featured a cheeky sidebar by her husband, Victor, reassuring readers that they could, in fact, drink wine with soup (and a reminder to slightly chill Dolcetto). Full-color photos accompanied ambitious step-by-step guides on how to break down and process whole coconuts, skin and bone ducks, and make fresh pasta from scratch.

It's hard to imagine a time before food processors occupied shelf space in nearly every American kitchen and made routine work out of everything from pesto to terrines. Sontheimer based the original Cuisinart on the French Magimix, a domestic version of the industrial food processor Robot-Coupe. With its formidable, half-horsepower motor and exorbitant $175 price tag, the Cuisinart didn't catch on right away.

Ina recalled living in a Manhattan apartment in the mid-1970s when her foodie neighbor ran over with a picture of a food processor from a magazine. Not entirely sure of what it did, though certain they needed one, the women promptly set off for gourmet emporium Zabar's and got on a numbered waiting list. Ina brought the appliance home, unpacked it, and set it on the counter, where it would remain for seven or eight months before she plucked up the courage to even turn it on.

"It was frightening, really otherworldly," she said. "I remember thinking, anything that can chop onions in three seconds can't be right. So I first had to learn how powerful it was."

But Sontheimer was a savvy marketer, as food writer John Birdsall pointed out in a story for Bon Appétit. He knew that with a bit of guidance, the food processor could transform the cooking and entertaining lives of knowledgeable, curious, and well-heeled home cooks like Ina.

"Carl Sontheimer was very good at understanding marketing and luxury-brand placement, and he knew the food processor's potential," said Jerome, who wrote more than half a dozen cookbooks. "He just had to convince people of it. And I'm guessing the best way to start from his perspective was to get Jim Beard and his friends on his side."

Sontheimer sent free machines to Beard and fellow culinary heavy hitters including Julia Child, Craig Claiborne, and Pépin. They took their food processors on the road, demoing the quick work they could made of the labor-intensive, classical French techniques in style at the time.

"People had never seen that type of machine before," said Pépin, who recalled showing off the Cuisinart at Gimbels, in New York. "For me, I thought it was a great thing. I used to pound fish or meat into a mortar with a large pestle and push it through a little screen with a wooden mushroom, then work it with cream. Now all that work took two minutes. I'm saying that because at the time people would say, 'You take some of the joy out of cooking with this shortcut.' I didn't think of it that way."

Elsewhere, Sontheimer hired food writers like Mandel and Beard to develop cookbooks specific to the food processor. Starting in January 1976, every Cuisinart came with a slender, spiral-bound cookbook called "New Recipes for the Cuisinart Food Processor" featuring recipes from Simone Beck, Kafka, and others with "Beardian-approved credentials," said Jerome, who co-wrote it with Beard. The appliance also came with an invitation to join the Cuisinart Cooking Club, which included a subscription to the club newsletter and, starting in 1978, a couple free issues of Cooking.

Sontheimer named Kafka Cooking's debut editor. She was a scholarly food writer who would horrify many an American epicurean throughout her illustrious career for embracing shortcut appliances like the food processor and microwave. Kafka turned her apartment at East 97th Street and Madison Avenue into Cooking's test kitchen, recruiting Jerome to help test recipes. She also selected the magazine's initial, diminutive size — a brilliant differentiator that allowed it to look more lavish and impressive than its editorial budget allowed, Jerome said.

It wasn't without conflict, though, with such fiery personalities at the helm. Eventually, Sontheimer took back the reins and moved production to Connecticut; later guest editors would include Beard and cookbook author Paula Wolfert. The magazine sized up to a standard format, and issues grew more recipe-heavy as readers requested ideas for the appliance they could no longer live without.

Indeed, once Ina mastered chopping onions and the subtle art of pulsing, she was off and running. She credits the Cuisinart and its companion magazine with teaching her to bake — a skill that would launch her decades-long career as a baker, caterer, and restaurateur starting in the 1980s. (Her own 2015 cookbook and memoir, "Ina's Kitchen," contains a recipe for her famous New Old-Fashioned Vanilla Bean Pound Cake, made entirely in a food processor.)

In the late 1980s, Cooking transitioned to a newsletter format, and then a direct-mail catalog that lasted into the early 2000s, when the internet forever changed the media landscape — not to mention how we learn to cook and buy ingredients. Even in its earliest pages, you can see trends taking shape, like the beginning of a marked shift away from writers and teachers to chef-dominated food media and the embrace of easier entertaining. Jerome's Cooking column debuted in October 1978 as a comprehensive guide to 30-minute dinner parties decades before anyone uttered the name Rachael Ray. The 14 recipes he proffered included beef batonettes with shallot butter and food-processor chocolate mousse ("I didn't even know I did that!" he gasped). An accompanying photo spread noted how to artfully mismatch different-patterned plates and glassware — a penchant of Beard's, and an aesthetic that still adorns many cool restaurant tables in 2021.

"It's a lost world in some ways," said Pépin, who has kept most of his issues, too. "A world that could be very useful to young chefs and to cooks, to learn a little bit about where they come from and the way things were."

Now, some 43 years after Ina, I'm the one sitting down to voraciously read each issue of Cooking cover to oil-splattered cover. However, I make notes on my phone rather than in the margins, getting lost in the prose and delighting in every food-history lesson. ("Somewhere in my mother's generation, art gave way to convenience," lamented Salzfass Freiman in a lengthy feature on fruit pies and tarts. "How refreshing to have an eggplant dish without tomatoes and/or parmesan!" wrote cooking teacher Giuliano Bugialli in the headnote to a recipe for eggplant baked in butter that predated tomatoes' arrival in Italy.)