Congress loots the Treasury for U.S. war machine — while bickering over Build Back Better

Bipartisanship in action: Congress will once again give the Pentagon whatever it wants, with little or no debate 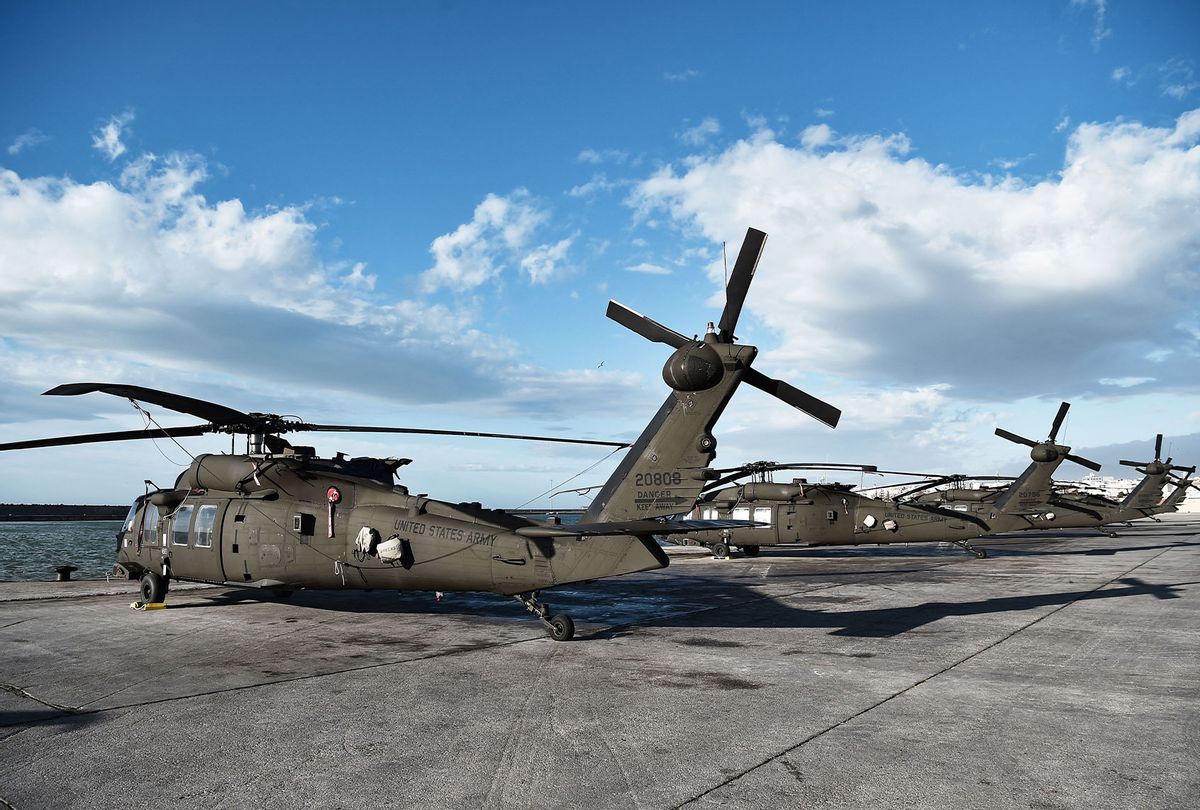 US Army helicopters are parked in the port of Alexandroupoli, Northern Greece, on December 3, 2021. (SAKIS MITROLIDIS/AFP via Getty Images)
--

Despite a disagreement over some amendments in the Senate, the U.S. Congress is poised to pass a $778 billion military budget bill for 2022. As they have been doing year after year, our elected officials are preparing to hand the lion's share — more than 65% — of federal discretionary spending to the U.S. war machine, even as they wring their hands over spending a mere quarter of that amount on the Build Back Better Act.

The U.S. military's incredible record of systematic failure — most recently its final trouncing by the Taliban after 20 years of death, destruction and lies in Afghanistan — cries out for a top-to-bottom review of its dominant role in U.S. foreign policy and a radical reassessment of its proper place in Congress' budget priorities.

Instead, year after year, members of Congress hand over the largest share of our nation's resources to this corrupt institution, with minimal scrutiny and no apparent fear of accountability when it comes to their own reelection. Members of Congress still see it as a "safe" political call to carelessly whip out their rubber stamps and vote for however many hundreds of billions in funding Pentagon and arms industry lobbyists have persuaded the Armed Services Committees they should cough up.

Let's make no mistake about this: Congress' choice to keep investing in a massive, ineffective and absurdly expensive war machine has nothing to do with "national security" as most people understand it, or "defense" as the dictionary defines it.

U.S. society does face critical threats to our security, including the climate crisis, systemic racism, erosion of voting rights, gun violence, grave inequalities and the corporate hijacking of political power. But one problem we fortunately do not have is the threat of attack or invasion by a rampant global aggressor or, in fact, by any other country at all.

Maintaining a war machine that outspends the 12 or 13 next largest militaries in the world combined actually makes us less safe, as each new administration inherits the delusion that the United States' overwhelmingly destructive military power can, and therefore should, be used to confront any perceived challenge to U.S. interests anywhere in the world — even when there is clearly no military solution and when many of the underlying problems were caused by past misapplications of U.S. military power in the first place.

While the international challenges we face in this century require a genuine commitment to international cooperation and diplomacy, Congress allocates only $58 billion, less than 10 percent of the Pentagon budget, to the diplomatic corps of our government: the State Department. Even worse, both Democratic and Republican administrations keep filling top diplomatic posts with officials indoctrinated and steeped in policies of war and coercion, with scant experience and meager skills in the peaceful diplomacy we so desperately need.

This only perpetuates a failed foreign policy based on false choices between economic sanctions that UN officials have compared to medieval sieges, coups that destabilize countries and regions for decades, and wars and bombing campaigns that kill millions of people and leave cities in rubble, like Mosul in Iraq and Raqqa in Syria.

The end of the Cold War was a golden opportunity for the U.S. to reduce its forces and military budget to match its legitimate defense needs. The American public naturally expected and hoped for a "peace dividend," and even veteran Pentagon officials told the Senate Budget Committee in 1991 that military spending could safely be cut by 50% over the next 10 years.

But no such cut happened. U.S. officials instead set out to exploit the post-Cold War "power dividend," a huge military imbalance in favor of the United States, by developing rationales for using military force more freely and widely around the world. During the transition to the new Clinton administration, Madeleine Albright famously asked Gen. Colin Powell, then chair of the Joint Chiefs of Staff,  "What's the point of having this superb military you're always talking about if we can't use it?"

In 1999, as secretary of state under Bill Clinton, Albright got her wish, running roughshod over the UN Charter with an illegal war to carve out an independent Kosovo from the ruins of Yugoslavia.

The UN Charter clearly prohibits the threat or use of military force except in cases of self-defense or when the UN Security Council takes military action "to maintain or restore international peace and security." This was neither. When U.K. Foreign Secretary Robin Cook told Albright his government was "having trouble with our lawyers" over NATO's illegal war plan, Albright crassly told him to "get new lawyers."

Twenty-two years later, Kosovo is the third-poorest country in Europe (after Moldova and post-coup Ukraine) and its independence is still not recognized by 96 countries. Hashim Thaçi, Albright's hand-picked main ally in Kosovo and later its president, is awaiting trial in an international court at the Hague, charged with murdering at least 300 civilians under cover of NATO bombing in 1999 to extract and sell their internal organs on the international transplant market.

Clinton and Albright's gruesome and illegal war set the precedent for more illegal U.S. wars in Afghanistan, Iraq, Libya, Syria and elsewhere, with equally devastating and horrific results. But America's failed wars have not led Congress or successive administrations to seriously rethink the U.S. decision to rely on illegal threats and uses of military force to project U.S. power all over the world, nor have they reined in the trillions of dollars invested in these imperial ambitions.

Instead, in the upside-down world of institutionally corrupt U.S. politics, a generation of failed and pointlessly destructive wars have had the perverse effect of normalizing even more expensive military budgets than during the Cold War, and reducing congressional debate to questions of how many more of each useless weapons system they should force U.S. taxpayers to foot the bill for.

It seems that no amount of killing, torture, mass destruction or lives ruined in the real world can shake the militaristic delusions of America's political class, as long as the "military-industrial-congressional complex" (President Dwight Eisenhower's original wording) is reaping the benefits.

Today, most political and media references to the military-cndustrial Complex refer only to the arms industry as a self-serving corporate interest group on a par with Wall Street, Big Pharma or the fossil fuel industry. But in his Farewell Address, Eisenhower explicitly pointed not just to the arms industry but the "conjunction of an immense military establishment and a large arms industry."

Eisenhower was just as worried about the anti-democratic impact of the military as the arms industry. Weeks before his Farewell Address, he told his senior advisers, "God help this country when somebody sits in this chair who doesn't know the military as well as I do." His fears have been realized in every subsequent presidency.

According to Milton Eisenhower, the president's brother, who helped him draft his Farewell Address, Ike also wanted to talk about the "revolving door." Early drafts of his speech referred to "a permanent, war-based industry," with "flag and general officers retiring at an early age to take positions in the war-based industrial complex, shaping its decisions and guiding the direction of its tremendous thrust." He wanted to warn that steps must be taken to "insure that the 'merchants of death' do not come to dictate national policy."

As Eisenhower feared, the careers of figures like retired generals Lloyd Austin and Jim Mattis now span all branches of the corrupt MIC conglomerate: commanding invasion and occupation forces in Afghanistan and Iraq; then donning suits and ties to sell weapons to new generals who served under them as majors and colonels; and finally re-emerging from the same revolving door as Cabinet members at the apex of American politics and government.

So why does the Pentagon brass get a free pass, even as Americans feel increasingly conflicted about the arms industry? After all, it is the military that actually uses all these weapons to kill people and wreak havoc in other countries.

Even as it loses war after war overseas, the U.S. military has waged a far more successful one to burnish its image in the hearts and minds of Americans and win every budget battle in Washington.

The complicity of Congress, the third leg of the stool in Eisenhower's original formulation, turns the annual battle of the budget into the "cakewalk" that the war in Iraq was supposed to be, with no accountability for lost wars, war crimes, civilian massacres, cost overruns or the dysfunctional military leadership that presides over it all.

There is no congressional debate over the economic impact on America or the geopolitical consequences for the world of uncritically rubber-stamping huge investments in powerful weapons that will sooner or later be used to kill our neighbors and smash their countries, as they have for the past 22 years and far too often throughout our history.

If the public is ever to have any impact on this dysfunctional and deadly money-go-round, we must learn to see through the fog of propaganda that masks self-serving corruption behind red, white and blue bunting, and allows the military brass to cynically exploit the public's natural respect for brave young men and women who are ready to risk their lives to defend our country. In the Crimean War, the Russians called British troops "lions led by donkeys." That is an accurate description of today's U.S. military.

Sixty years after Eisenhower's Farewell Address, exactly as he predicted, the "weight of this combination" of corrupt generals and admirals, the profitable "merchants of death" whose goods they peddle, and the senators and representatives who blindly entrust them with trillions of dollars of the public's money constitute the full flowering of his greatest fears for our country.

Eisenhower concluded, "Only an alert and knowledgeable citizenry can compel the proper meshing of the huge industrial and military machinery of defense with our peaceful methods and goals." That clarion call echoes through the decades and should unite Americans in every form of democratic organizing and movement building, from elections to education and advocacy to mass protests, to finally reject and dispel the "unwarranted influence" of the military-industrial-congressional complex.

More on the military-industrial complex — and why Congress keeps funding it without asking questions: