Roosevelt told his party it could never compromise with "economic royalists." Democrats should heed his words now 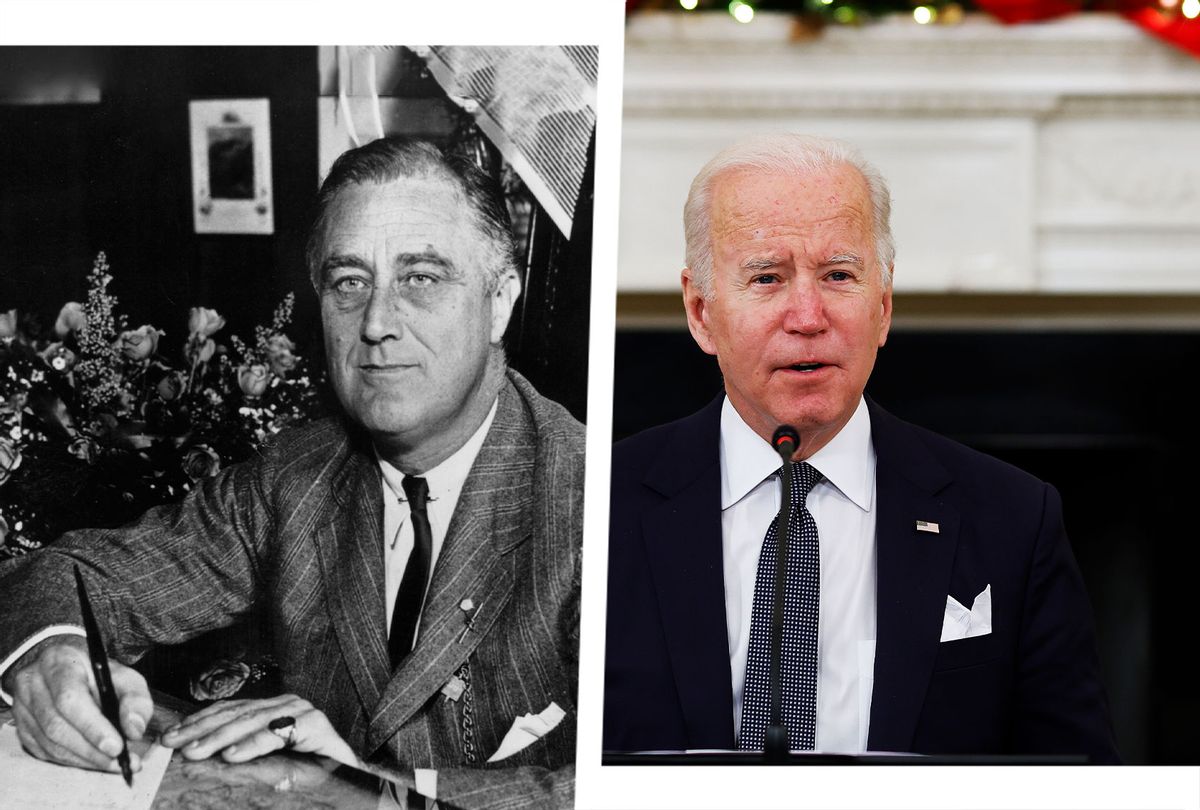 There was a time when Democrats called their party "the Party of Freedom."

Largely because of the horrors of the Republican Great Depression, Americans realized that, as Franklin D. Roosevelt said in his 1944 State of the Union address, "Necessitous men are not free men."

You can't disentangle economics from liberty. Which is why Democrats have proclaimed since the 1930s that:

Instead, as FDR said in the next sentence of that speech:

It's time for the Democratic Party to begin messaging like FDR did.

The debates today around infrastructure, Build Back Better, voting rights and ending the filibuster are not separate things: They all represent Democratic efforts to expand freedom that has been eroded by 40 years of "conservative" policies.

RELATED: Why Americans hate and fear the poor: Joanne Samuel Goldblum on the price of inequality

With the 1920 election, Warren Harding won the presidency on a platform of tax cuts for the rich (from 90% down to 25%), deregulation of business and privatization of government functions. All of which led directly to the Crash of 1929 and the Republican Great Depression.

Thus, when FDR took the White House in the GOP's economic wreckage in 1933, he positioned the Democratic Party solidly in the progressive camp and proclaimed a new era of freedom in America.

Virtually every program of the New Deal from labor rights to Social Security was, Roosevelt said, designed to protect and expand American freedoms.

By 1936, FDR had succeeded in completely rebranding the Democratic Party as the "Party of Freedom." When he accepted the Party's nomination for a second term in Philadelphia, he laid it out clearly.

"That very word freedom," he thundered to the giant hall, "in itself and of necessity, suggests freedom from some restraining power.

"[I]t was to win freedom from the tyranny of political autocracy that the American Revolution was fought."

But, FDR pointed out, with the Industrial Revolution came a massive accumulation of wealth and political power in the hands of a very, very few. And that meant the freedom of average working people was now under attack by a new type of American tyranny.

"Since that struggle, however, man's inventive genius released new forces in our land which reordered the lives of our people. The age of machinery, of railroads; of steam and electricity; the telegraph and the radio; mass production, mass distribution — all of these combined to bring forward a new civilization and with it a new problem for those who sought to remain free."

The rise of big business — he called them "economic royalists" — and their alliance with the Republican Party was, FDR said, a challenge that required a frontal assault on behalf of freedom for working-class Americans.

"For out of this modern civilization economic royalists carved new dynasties. New kingdoms were built upon concentration of control over material things. Through new uses of corporations, banks and securities, new machinery of industry and agriculture, of labor and capital — all undreamed of by the Fathers — the whole structure of modern life was impressed into this royal service. …

"Throughout the nation, opportunity was limited by monopoly. Individual initiative was crushed in the cogs of a great machine. The field open for free business was more and more restricted. Private enterprise, indeed, became too private. It became privileged enterprise, not free enterprise."

While fascism was rising in Europe, another type of tyranny was overtaking America, driven by bankers and industrialists who controlled vast wealth and political power.

If you lived under the thumb of an employer who refused decent pay and benefits, and you lacked the legal political power to join a union, you were not free.

"Liberty requires opportunity to make a living — a living decent according to the standard of the time, a living which gives man not only enough to live by, but something to live for.

Which is where most Americans found themselves under the ravages of raw, unregulated capitalism. We had lost our freedom, and the Democratic Party was taking an explicit stand to restore it.

"Today we stand committed to the proposition that freedom is no half-and-half affair," FDR said, calling out the morbidly rich oligarchs of his day and the Republican politicians who sucked up to them.

Like Nikki Haley calling Democrats "socialists" on Twitter this weekend in a pathetic effort to ingratiate herself with right-wing billionaires, Republican politicians in the 1930s and 1940s called FDR everything from a socialist and a communist to an all-out tyrant.

But he threw it right back into their faces. His agenda, he said, was freedom.

When the GOP accused Roosevelt of being that day's equivalent of a "bleeding heart liberal," he proudly wore that badge.  After all, in the finest American tradition, he and his Democratic Party were fighting for the freedom of all Americans:

"We do not see faith, hope and charity as unattainable ideals, but we use them as stout supports of a nation fighting the fight for freedom in a modern civilization."

It was under the banner of "freedom" that FDR accomplished so much of his agenda.  Democrats today must do the same.

There are, of course, elected Democrats who oppose many of these things. Given the stakes of today, it's not hyperbole to call them traitors to the Democratic Party specifically and the cause of freedom in America more generally.

In 1940, a faction that today we'd call "corporate problem-solver Democrats" tried to hijack the party and force FDR to repudiate progressive Henry Wallace for a more "moderate" vice president in the election that year. He was having no part of it.

"In the century in which we live," FDR wrote, "the Democratic Party has received the support of the electorate only when the party, with absolute clarity, has been the champion of progressive and liberal policies and principles of government."

After all, if they were the party of freedom then how could they possibly sell out to the "economic royalists" who were making common cause with the GOP?

You're either a progressive party, FDR said, or you're not: You can't be both, and when you try to straddle that fence you will lose elections more often than not.

"The party has failed consistently," he wrote to his party's leaders, "when through political trading and chicanery it has fallen into the control of those interests, personal and financial, which think in terms of dollars instead of in terms of human values."

If the Democratic Party is not all about freedom, he said, it can't be distinguished from the GOP, which actively fights against freedom for all but the wealthy, and will fail.

"Until the Democratic Party through this convention makes overwhelmingly clear its stand in favor of social progress and liberalism, and shakes off all the shackles of control fastened upon it by the forces of conservatism, reaction and appeasement, it will not continue its march of victory."

Summarizing, FDR wrote to his party leaders: "It is best not to straddle ideals. … It is best for America to have the fight out here and now. … The party must go wholly one way or wholly the other. It cannot face in both directions at the same time."

In the name of triangulation, political strategy and big-tent-ism, the modern Democratic Party has seen itself repeatedly sabotaged from within.

First it was Bill Clinton's embrace of Reagan's corporate "free trade" and his proclaiming "an end to welfare as we know it" while killing off the Aid to Families with Dependent Children program put in place by FDR in 1936.

Then came Joe Lieberman's taking over a million dollars from the insurance industry to gut the public option from Obamacare during the single 74-day window Barack Obama had a filibuster-proof Senate in his entire presidency.

And of course there's today's crisis, with Joe Manchin and Kyrsten Sinema blocking filibuster reform and the "corporate problem solvers" caucus in both the House and Senate working like termites to undermine or co-opt any successful progressive legislation.

If the Democratic Party is to once again be the party of freedom, its leadership must take a stand like FDR did in 1940 when he defied the power brokers and wealth-toadies in his own party.

Its members must sign onto the freedom crusade, and the party must actively work, through the upcoming primaries, to purge itself of those who are only in office to get rich or enjoy their moment of fame.

And, most important, the Democratic Party must reclaim "freedom" as its banner. For Americans, freedom is not only a sacred right and duty, but it's also the ultimate political marketing tool … and it's past time for Democrats to take it back and claim it as their own.

More on economic inequality and its role in American history: