FDR once tried to purge disloyal Democrats — would it work for Biden to do the same?

Roosevelt sought to drive out a passel of conservative Democrats in 1938. Spoiler: It didn't go as planned 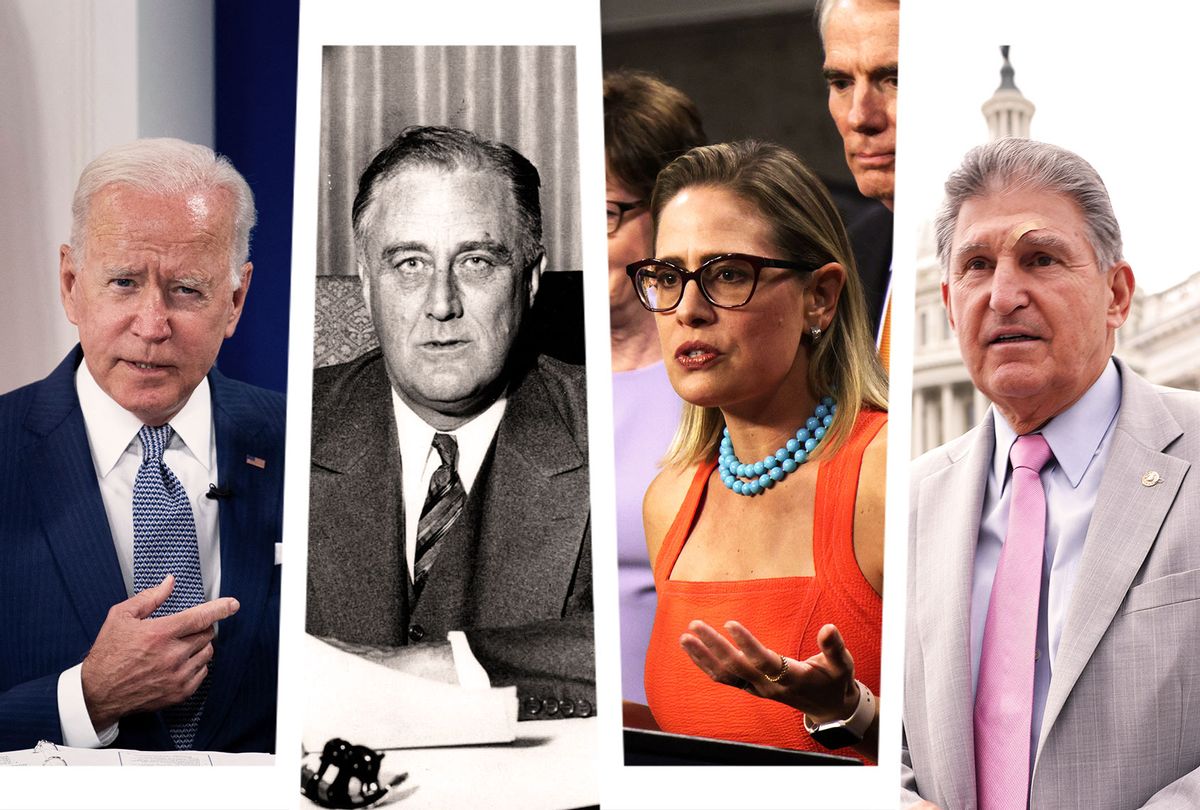 Allan Lichtman has a track record of accurately predicting presidential elections, and is generally an astute observer of the American political scene. So I paid attention when Lichtman, a political science professor at American University, told me it would be disastrous for President Biden to go to war against Joe Manchin, Kyrsten Sinema and the other centrist Democrats jamming him up in Congress.

Lichtman was fully aware that progressives were eager to purge obstructionist Democrats, or at least punish them somehow for constricting or defeating Biden's legislative agenda. I had already spoken to a historian — Harvey J. Kaye, the editor of "FDR on Democracy" — who pithily summed up the logic behind that point of view.

"Look, there's two choices," Kaye said. "For the sake of the future, he should literally go after them, period." His "them" clearly referred to Manchin and Sinema. "But for the sake of democracy in the near term, what happens if the Republicans win?" Kaye added that he could not understand "why Biden hasn't called Manchin" and the others and told them that their political survival depended on toeing the line.

In my conversation with Lichtman, he quoted humorist Will Rogers' famous quip: "I belong to no organized party. I am a Democrat." Kaye said basically the same thing. I reached out to both of them for Salon about the most conspicuous example of a president turning against legislators from his own party: Franklin D. Roosevelt's attempt to purge right-wing Democrats in the 1938 midterm elections. My primary question was about what lessons Biden could learn from that moment, given that his own presidency may go down in flames because of intransigent "moderate" Democrats.

FDR certainly wasn't the first Democratic president to turn against members of his own party. In 1918, Woodrow Wilson campaigned against five Southern legislators who opposed his World War I policies, and only one of them actually defeated his Wilson-backed challenger. But that was a different era, when the Democratic Party's chaos led to an ideological vacuum. Instead of trying to fill that vacuum, Wilson weeded out politicians who opposed him on a specific set of policies that were widely supported by both parties. So there's no clear parallel to Biden in 2021.

Roosevelt's situation was at least somewhat similar. He explicitly wanted the 1938 midterm elections to realign the Democratic Party in a more liberal direction. Speaking to the nation in a "Fireside Chat" on June 24, Roosevelt characterized the coming primaries as containing "many clashes between two schools of thought, generally classified as liberal and conservative." Liberals recognized "that the new conditions throughout the world call for new remedies," while conservatives do not "recognize the need for government itself to step in and take action to meet these new problems." Concerned that obstructionist members of Congress might roll back his achievements in creating unemployment insurance, old age pensions, anti-monopoly measures and regulation of the financial industry, Roosevelt accused them of wanting a return "to the kind of government that we had in the 1920s." He didn't need to remind his listeners that those policies had plunged America into the Great Depression. As he saw it, Democrats needed to rid themselves of the conservatives who hindering his vision before they destroyed his new liberal coalition.

Well: It didn't work. FDR targeted Rep. John J. O'Connor of New York, then chairman of the House Rules Committee, along with 10 Democratic senators, and only O'Connor was defeated in a primary. This was more than an immediate political setback for Roosevelt, although it definitely counted as that. (Democrats lost seven seats in the Senate and 72 in the House, although they started out with such a huge margin they still retained control of Congress.) In a way, his desire to realign American politics along more ideological lines worked. Right-wing Democrats from the South realized they had common cause with conservative Republicans from the Midwest, and their "conservative coalition" controlled Congress for a generation, shaping national policy regardless of which party officially had a majority. If anything, Roosevelt weakened the liberal cause rather than strengthening it. His only consolation was that many of the policies he was worried would get targeted wound up staying intact.

While the parallels between Roosevelt's predicament and Biden's are inexact, they are similar in the big ways that count. Biden's critics on the left want him to wage political war against the likes of Manchin, Sinema, and Rep. Josh Gottheimer of New Jersey, middle-path Democrats who appear willing to sacrifice his entire agenda in the interest of "bipartisanship." It sounds like strength. It almost certainly would not work.

As Kaye pointed out, Biden simply doesn't have the votes that FDR did, either in Congress or the nation at large. Roosevelt was a deeply beloved figure who had won re-election in 1936 in what at the time was the biggest electoral landslide in history. Biden, although he won decisively in 2020, has a narrower mandate. Lichtman noted that attacking moderate Democrats would imperil the Senate, where even one lost seat would swing the 50-50 body to the Republicans. If Democrats wanted a coalition large enough to render the "centrists" irrelevant, they would need to turn out in larger numbers and elect more Democrats to Congress and local offices. That hasn't happened, and at this moment Biden's legislative coalition is not large enough, nor is his popular support deep enough, even to contemplate Roosevelt's strategy — which, again, did not even work out for the most popular president of the 20th century.

The underlying problem, perhaps, is that the Democratic Party, in its current form, is fundamentally incompetent. Salon executive editor Andrew O'Hehir addressed this a recent article about Democrats' failure to eliminate the filibuster and protect voting rights.

This isn't a nice thing to say about a bunch of mostly sane and approximately reasonable people, but here's the truth: If you set out to design a left-center political party that was fated to surrender, little by little, to authoritarianism — because of circumstances beyond its control, because of internal indecision and ideological fuzziness, because it faced an entrenched and deranged opposition party, because of whatever — you could hardly do better than the current version of the Democratic Party.

This isn't just about Kyrsten Sinema flipping on prescription drug prices right after taking large campaign donations from Big Pharma. Democrats seem incapable of addressing the fundamental problems with our economy and lacks the internal cohesion to stand up to Republicans who are using Trump's Big Lie about the 2020 presidential election to erode or eliminate democracy. Those issues can't be corrected by defeating Joe Manchin and Kyrsten Sinema — which is also probably impossible and likely undesirable. The Democratic Party's best hope is to make itself relevant and vital again, which is a much larger problem.