The new "Greatest Generation" or the worst one? The 2020s will test younger Americans 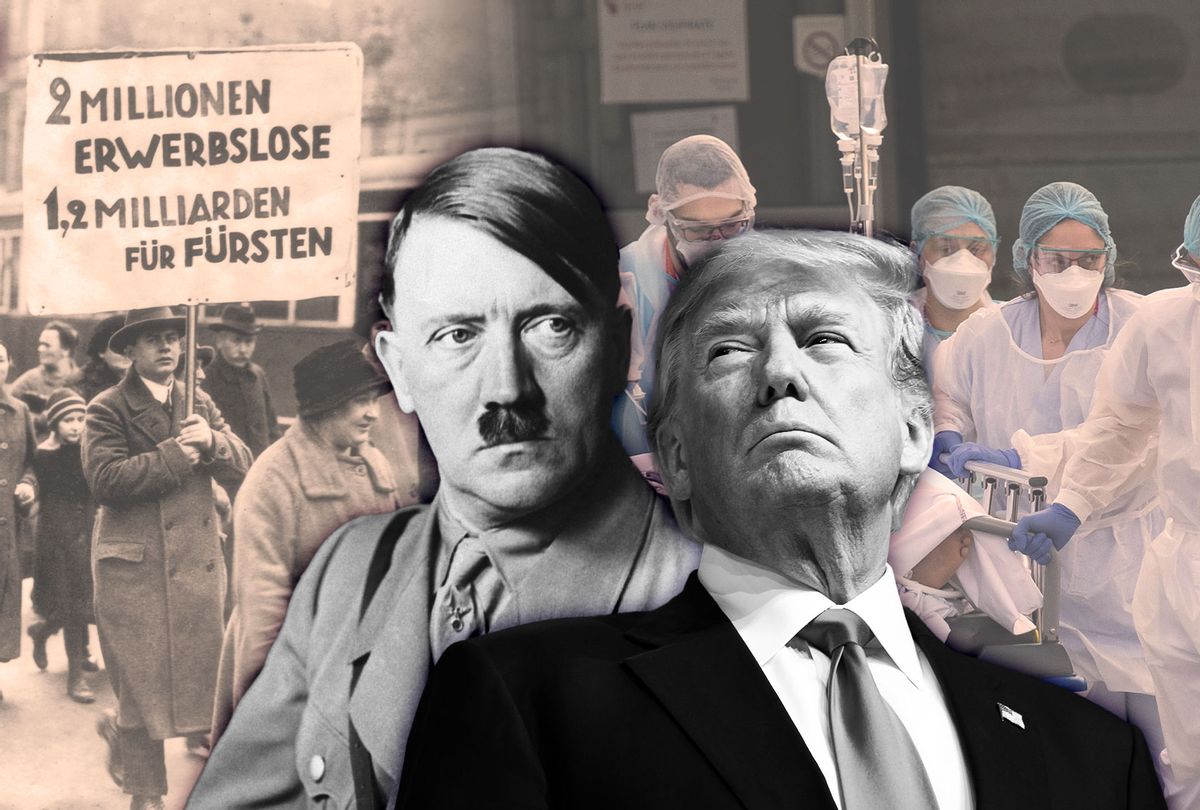 In 1998, the longtime NBC News anchor Tom Brokaw wrote a book called "The Greatest Generation," honoring the Americans who came of age during the Great Depression, fought in World War II and brought the planet through the early years of the post-atomic era. Brokaw pointed out that they had faced tests unlike anything previous generations could have imagined and, while hardly perfect, ultimately succeeded when confronting the major issues of their time. Had they failed, the world today would be a much, much worse place.

Flash forward to 2021. Whether we realize it or not, history has put post-baby boom Americans in a similar crucible. To use a quote apocryphally attributed to Mark Twain, "History doesn't repeat itself but it often rhymes." The generations that endured the hardships of the late 2000s and 2010s will be confronted with challenges in the 2020s no less momentous and grave than the Great Depression, World War II and advent of the nuclear era.

First, a quick history lesson. After the stock market crashed in 1929, the global economy entered a period of intense decline known as the Great Depression. Millions upon millions worldwide languished in horrendous poverty, prompting nations to attempt a wide range of economic reforms to provide relief to their people. In the U.S., President Herbert Hoover's failure to adequately address the crisis caused him to lose in the 1932 election to Franklin D. Roosevelt, whose New Deal programs brought some degree of economic security and alleviated the mass suffering.

The Great Depression itself did not end, however, until World War II, a devastating conflict brought on by the rise of Adolf Hitler and the Nazis during the Great Depression, a fascist and racist regime that sought to dominate as much of the world as possible. Initially the U.S. did not enter the war — in large part because American right-wingers and isolationists, including potential Republican presidential candidate Charles Lindbergh, sympathized with the Nazis and used an "America First" philosophy as a cover for not stopping them — but once American military power and industry were involved, the tide rapidly turned against the Nazis (and the Japanese empire in the Far East). Just as significant, Roosevelt's World War II economic policies brought about full employment, reduced income inequality, gave women and African Americans expanded roles in the workforce and led to legislation like the GI Bill, which ensured that veterans would have education and job opportunities when they returned.

America experienced unprecedented economic growth in the three decades after the war. Yet by using nuclear weapons against Japan in 1945, the U.S. had ushered in a new era of history, one in which humanity for the first time literally had the power to destroy itself. It was clear that world leaders needed to learn how to responsibly manage the incredible technology at their disposal. Fortunately, the Greatest Generation and their elders by and large understood the gravity of the situation and behaved responsibly, staving off nuclear war despite some close calls in subsequent decades. (The president faced with our closest brush with nuclear apocalypse, John F. Kennedy, was himself a World War II veteran, and the first member of the "Greatest Generation" to occupy the Oval Office.)

While the term Greatest Generation is generally used to refer to the Americans who were old enough to fight in World War II — a demographically narrow group — today's challenges will be addressed by the three overlapping or interlocking generations who followed the baby boomers and were born after roughly the middle of the 1960s: Gen X, the millennial generation and the children and younger adults now known as Gen Z. Their experiences are in many ways wildly different — the oldest members of this group are already in their 50s, while the youngest are still in grade school — they were all shaped by the same set of traumas.

If the inflection point for the Greatest Generation was 1929, the inflection point for our era was the year 2008. That was the year of the financial and economic collapse known as the Great Recession, and also the year America elected its first Black president. Obama brought about a partial recovery (as I've argued before, he was the best president in half a century), but the lingering hardships of that massive economic setback created a world of diminished opportunity for everyone: The Gen-Xers who believed they had settled into adulthood, the millennials who were just entering the economy, and the Gen-Z kids coming of age amid tremendous economic insecurity.

Like the 1930s, the 2010s weren't only defined by economic problems. Just as far right political movements became increasingly powerful in the 1930s, the 2010s saw the ascent of racist and fascist leaders who used the language of nationalism as a cover for their agendas. The most important and conspicuous of the bunch, of course, was Donald Trump, but right-wing populists and their allies came to power — or at least to political prominence — in numerous other nations in Europe, Asia and Latin America. Yet Trump emerged as the main face of far-right politics throughout the world, and cemented that reputation with his final act, a coup attempt and mob assault on the U.S. Capitol. Of the 11 sitting presidents who have run for a second term and lost, only Trump refused to recognize his defeat and instead attempted to overturn the election by force.

Yet despite Trump's double impeachment — another dubious historical distinction — most Republicans have refused to break from their now-former president, leaving him as the nominal head of their party and paving the way either for a Trump comeback or another candidate like him.

While all of this was happening, the world was burning up — literally. Human industry and transportation have continued to emit large quantities of carbon dioxide, methane and other greenhouse gases into the atmosphere, radically destabilizing the climate. The impact was devastating: Forest fires, droughts, floods, superstorms and heat waves, to name just a few. If it continues to go unchecked, scientists overwhelmingly agree that climate change will destroy our planet for future generations. We will see more superstorms and heat waves, more forest fires and mass extinction of vulnerable species. Coastal cities will be submerged while other regions may become so dry and hot they will be virtually abandoned, potentially creating millions of climate refugees. We'll find it more difficult to fight off disease, grow enough food, drink safe water and construct habitable buildings.

None of this even takes into account the COVID-19 pandemic, which at the time of this writing has infected more than 110 million people worldwid,e including almost 28 million in the United States. (More than 2.4 million people have died of the disease, including more than 490,000 in the United States.) In many ways, the COVID-19 pandemic was yet another reminder that the economic status quo has failed to protect people: While the world's governments could have paid people to stay home and pooled resources to develop and distribute a vaccine as quickly and equitably as possible, this proved impossible under the dictates of a capitalist market economy. As a result, we have seen a patchwork of responses that have conveniently allowed the rich to get richer while the rest of the world entered an economic recession even worse than the one in 2008.

While the pandemic will inevitably pass, it is in many ways a foreshadowing of what lies ahead. We see far-right leaderslike Trump ignoring science and the wealthy putting their immediate greed over the future of our species. There have been some heroes, like Hungarian biochemist Dr. Katalin Karikó and countless frontline workers in the health care industry, but people at the top have let down everyone else in a profound way.

The clock is ticking on all of the problems listed above. When it comes to the climate crisis, the threshold after which change becomes irreversible and apocalyptic may arrive by the end of this decade. Although Biden is doing his best to address the pandemic, he will have to undo the damage left behind by Trump's catastrophic mismanagement. The midterm elections of 2022 and the next presidential election two years after that could easily return Trump's movement, or whatever succeeds it, to national power.

All of these problems are coming to a head in the 2020s, just as the problems that built up after 1929 came to a head in the 1940s. You have both long-term existential threats to humanity's survival (nuclear war in the former case, climate change and pandemics and weapons of mass destruction in the latter) and the rise of right-wing extremists who openly oppose democracy (Hitler and his sympathizers in the 1930s and 1940s, Trump and those like him in the 2010s and 2020s).

There are also solutions. The generations confronting this challenge must follow in the footsteps of the racial minorities and women who, after being empowered during World War II, began to fight for their rights in subsequent decades. Already we see people refusing to accept layers of systemic oppression — whether that's economic inequality, racism, sexism, religious intolerance, ableism, anti-LGBTQ prejudice and other forms of bigotry and injustice.

In many respects, economic justice is the bedrock issue that connects all these others. Near the end of his presidency, Roosevelt proposed an economic bill of rights that would have guaranteed remunerative jobs, shelter, medical care, food, clothing, recreation, education and the other necessities of life to every citizen. These things must become a reality for everyone, whether brought about by a Green New Deal, a universal basic income or some other method. Unless every person is protected from the fear of poverty, all other social justice achievements will rest on a foundation of quicksand.

In addition, we must fight the dual scourges of right-wing extremism and nationalism. The former leads to oppression and injustice, the latter to a species-wide inability to effectively respond to crises that know no borders. Fighting right-wing extremism is both a political and a cultural struggle. Freedom of speech is a crucial American value, but extremism, bigotry and conspiracy theories cannot be treated purely as commodities in the marketplace of ideas — ultimately they will should down that marketplace, and destroy all our freedoms in the process.

Finally, we must hold all our politicians accountable — and not just the ones we are used to opposing. Just because Joe Biden is a Democrat doesn't mean he can be counted on to do the right thing (consider his perverse insistence on nickel-and-diming a student loan forgiveness plan. Progressives must exert pressure on Biden and other Democrats to make sure they do everything necessary to protect our planet and preserve our economic and social rights. When leftists have done similar things to liberal presidents (such as Roosevelt), they've been able to achieve great things. If left to their own devices, however, career politicians like Biden are all too likely to capitulate to the forces of the status quo.

Franklin Roosevelt gave a memorable speech after he was renominated by the Democratic Party for a second term in 1936, an election he went on to win by one of the biggest landslides in history, in the process forging a coalition that kept Democrats in power for a generation — something that the New Greatest Generation must do again.