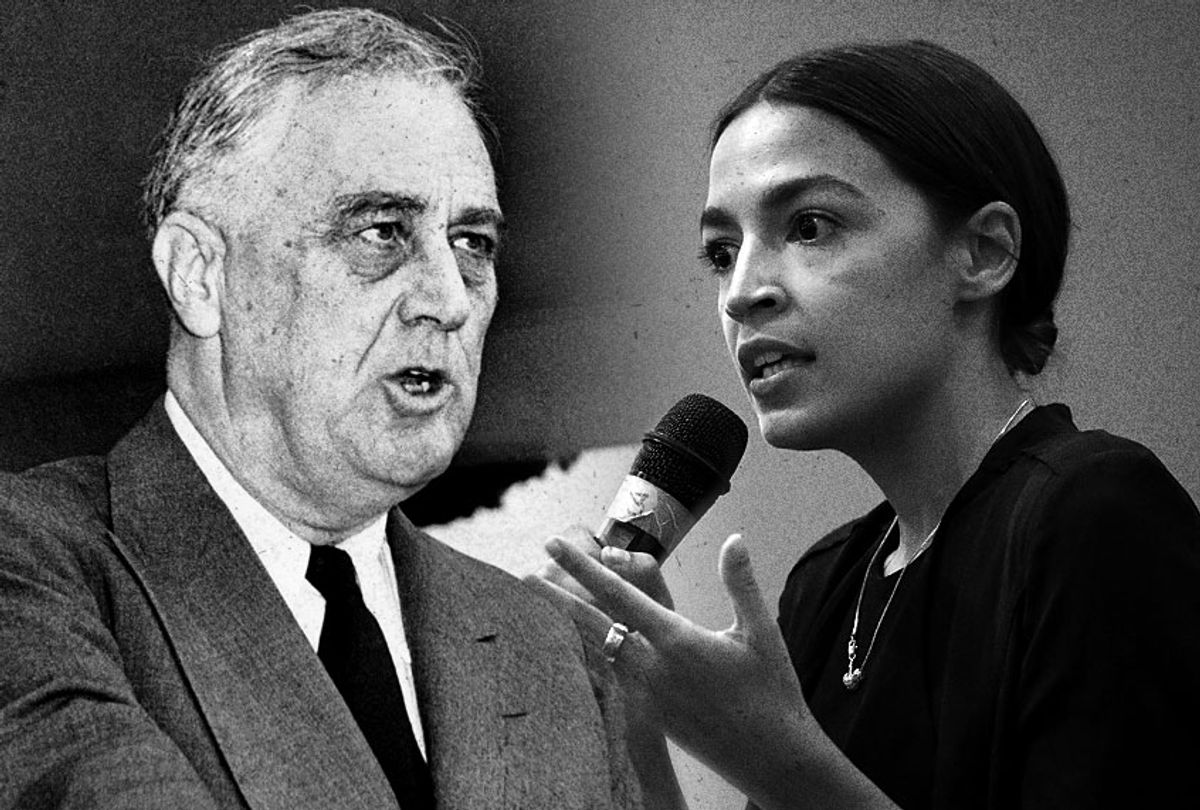 It makes sense that the leaders of the Democratic Party are being compelled to discuss a Green New Deal. Popularized by Rep. Alexandria Ocasio-Cortez, D-N.Y. -- and embraced by many others -- the very name "Green New Deal" harkens back to the last time in American history when progressives played a major role in government instead of being on the fringes of the opposition. During the 36-year span from the beginning of Franklin D. Roosevelt's New Deal programs in 1932 to the election of Richard Nixon in 1968, Democrats controlled the White House for 28 years and Congress for 32 years.

If Ocasio-Cortez can lead a successful push for a Green New Deal agenda to be passed by the next Democratic president, she will have transformed America in the process. To understand what that might entail, it is helpful to look back at Roosevelt's New Deal and the three most important things it did for the left-liberal agenda in America.

First, it responded to the question of whether government action should be utilized to help those who suffer economically with a resounding yes.

The New Deal "put people to work. It restored the confidence of many who had lost confidence. It made a start on America's social safety net," H.W. Brands, a historian at the University of Texas at Austin, told Salon by email. He also added that the New Deal did not literally end the Great Depression, which is important to remember when touting its merits. The New Deal helped millions of people survive a terrible economic ordeal, and that is to Roosevelt's credit — but it did not put an end to the ordeal itself.

Second, it created a durable political coalition around Roosevelt's programs that ensured the prevalence of liberal economic policies in the United States for a generation. The New Deal coalition included blue collar workers and farmers, union workers and relief recipients, racial and ethnic minorities and white Southerners, hardened political party operatives and lofty intellectuals. This coalition dominated American politics for more than a generation and elected three Democratic presidents — Harry Truman, John F. Kennedy and Lyndon Johnson — during that period. The lone Republican president during that span, Dwight Eisenhower, was much closer to the economic liberalism of Roosevelt than the reactionary conservatism of Republican presidents like Warren G. Harding and Calvin Coolidge.

Finally, as historian David M. Kennedy wrote in "Freedom From Fear: The American People in Depression and War, 1929-1945," the New Deal unified millions behind the idea that the government owes its citizens a certain basic security. Instead of being wedded to specific programmatic approaches, the underlying premise of the New Deal was that the ideological underpinnings of a given idea mattered less than whether or not it was effective. If the economic rights of the people were protected by a policy, then it made it into the New Deal agenda.

This last point deserves further elaboration, given some of the criticisms that have been made of the Green New Deal. While Ocasio-Cortez has been criticized for posting (and then taking down) a document which defined the Green New Deal as asserting a fundamental right to economic security and a sustainable planet, these notions are no more ideologically radical than the concept that we should have the right to free speech and personal property. When Ocasio-Cortez's document promised to "build on FDR’s second bill of rights" by guaranteeing people a job with a family-sustaining wage and full benefits, quality education, quality health care, affordable housing and an economic environment free of monopolies, it merely identified the basic truth that Roosevelt fingered in his 1944 State of the Union address.

"We have come to a clear realization of the fact that true individual freedom cannot exist without economic security and independence," Roosevelt explained. "'Necessitous men are not free men.' People who are hungry and out of a job are the stuff of which dictatorships are made."

As for the more controversial provisions of the document — such as the extreme measures taken to fight global warming or the notion that there should be "economic security for all who are unable or unwilling to work" — those are the margins within which compromises can be made. And even if those notions did prevail, our society would be much healthier than it is now, where the ultra-rich live on investment capital and do no productive work and we're destroying our planet with wanton abandon.

At the same time, supporters of a Green New Deal should remember that a big reason why the previous New Deal was passed is because its programs didn't alienate moderates. When Democratic leaders like House Speaker Nancy Pelosi try to talk down the Green New Deal, it is because they recognize that millions of Democrats don't live in New York City or Vermont or along the Pacific Coast and may feel dubious about the policies advocated by Ocasio-Cortez or Sen. Bernie Sanders. They may be turned off by a program that looks or feels too radical, even if its supporters don't believe that term is accurate. Any big-tent party must have room for moderates, or the tent won't be big enough for an electoral majority.

A Green New Deal must also avoid perpetuating certain social ills even as it fights other ones. Perhaps the biggest flaw of Roosevelt's New Deal was that it reinforced and exacerbated segregation and other racism even as it provided economic relief to minority communities, or that it did relatively little to improve the status of women, despite the efforts of First Lady Eleanor Roosevelt. If a Green New Deal is to transcend its progenitor, it can leave no marginalized person behind.

The Green New Deal would also unfold in an America very different from the one of the original New Deal. "When FDR launched the New Deal, the unemployment rate was over 20 percent," Brands explained. "Now it is under 4 percent. As for the 'green' part, there was little in the original New Deal that stressed technological advancements."

That said, the Green New Deal marks the first time in decades that the Democratic Party has advocated for bold new programs. If climate activists and tech innovators can join forces with labor unions and the working poor, social justice activists and urban liberals, then the Green New Deal could change America in the 2020s just as the first New Deal transformed this country in the 1930s.