In a forgotten 1942 speech, Roosevelt proposed an income cap; now, some economists say it's time to revive the idea 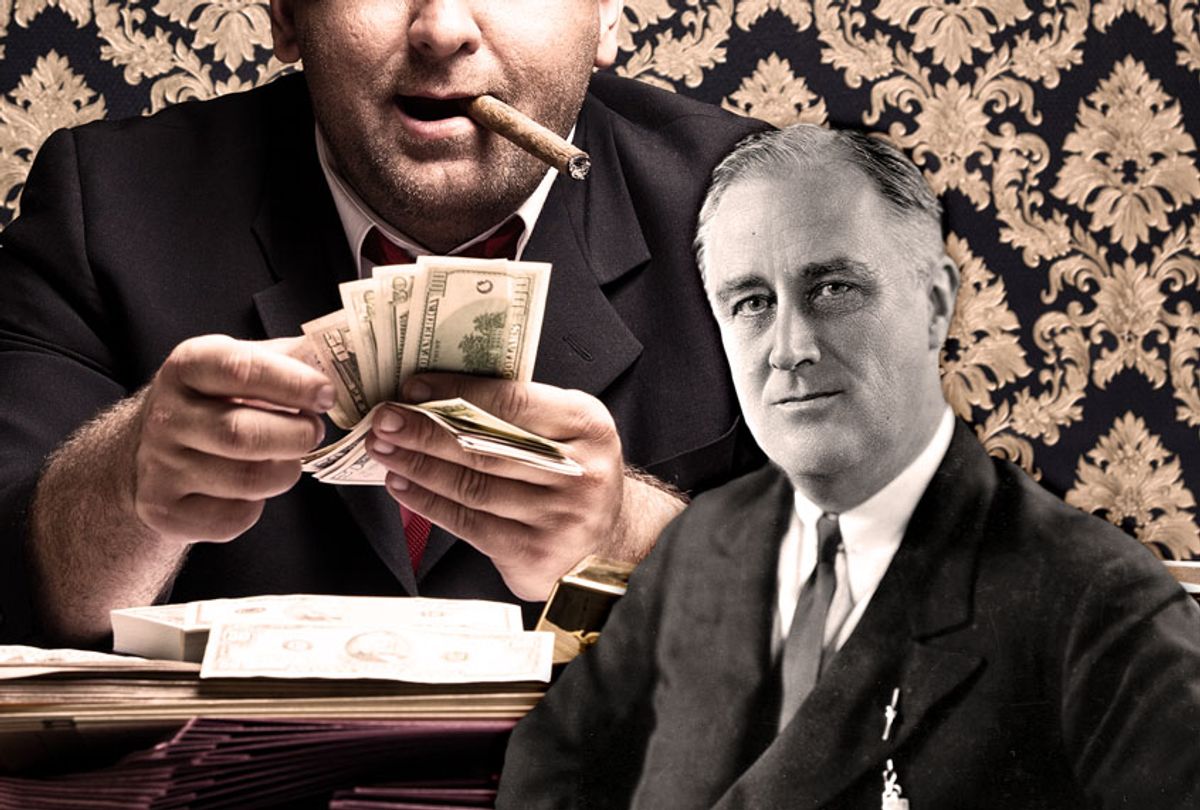 Five months after the attack on Pearl Harbor, President Franklin Roosevelt delivered a radio address that has unfortunately faded into obscurity. Embedded within that 1942 speech, Roosevelt laid the ideological foundations for establishing a cap on the annual income that the wealthiest Americans should be allowed to earn, and which structurally comes at the expense of everyone else.

His argument was summed up in a single quote:

Indeed in these days, when every available dollar should go to the war effort, I do not think that any American citizen should have a net income in excess of $25,000 per year after payment of taxes.

The context is important here: America was in the middle of fighting World War II and still struggled with the lingering socioeconomic trauma of the Great Depression. Roosevelt's goal was to keep the cost of living down, and he advocated a number of measures to achieve this. In addition to establishing a cap on income, he also wanted to increase corporate taxes, establish price and rent ceilings, ration essential commodities and stabilize wages, among other things. The immediate objective was helping Americans economically survive the crises of global war and economic catastrophe, although as he made clear in his 1944 State of the Union address, he also wanted to lay the foundations for protecting Americans' economic rights over the long term.

This brings us to 2020. Right now, America is facing the worst economic setback since the Great Depression, one that has exposed the structural flaws of capitalism in ways unimaginable mere months ago. While many of America's problems were exacerbated by President Donald Trump's incompetent governing, there are underlying systemic issues that would have existed regardless of who occupied the White House in 2020. Income inequality has gotten worse year after year. Global warming is presenting humanity with an impending existential calamity that will make the ongoing pandemic pale in comparison. And the ongoing economic setback is likely to lead to chronic unemployment for millions of people long after the "depression" phase of this crisis has subsided.

In other words: Between global warming and the pandemic, the depression and structural income inequality in general, it is clear that America lives in a state of existential crisis that impacts every citizen in ways analogous to the threats that existed during World War II. The question is, would Roosevelt's proposed income cap — which, adjusted for inflation, would equal just under $400,000 today — be helpful in the modern era? And given its mainstream attention then, is it really so radical an idea?

The economists to whom I spoke had varying opinions on the political viability of an income cap. Yet all agreed that if income could be successfully taxed in such a way, it would do a great deal to not only reduce class inequality, but fix many of the other problems threatening our planet.

"Absolutely. Absolutely," Dr. Richard D. Wolff, professor emeritus of economics at the University of Massachusetts Amherst, told Salon when asked if the revenue acquired by putting a cap on that income could pay for programs like universal free health care, free college, improving socioeconomic opportunity and paying for job-creating infrastructure. He emphasized that, because there are a lot of numbers in any hypothetical program like this which are simply not readily known, it is impossible to offer informed analysis on how much money could be allocated for what. At the same time, he emphasized that the revenue could be freed up — and that, in the grand scheme of things, establishing an income cap isn't really that radical.

After all, there is a crucial difference between income and wealth.

"Most of the conversations are about income, [but] relatively few are about wealth in the United States," Wolff told Salon. "This is mirrored by the fact that there are 8 million varieties of actual and proposed income tax schemes, but actually very few wealth tax proposals or schemes in the United States about the most important forms of wealth, which are stocks, bonds, cash, treasury securities, and all of that crap [which] is not taxed."

He added, "The only wealth tax that basically exists in the United States is a tax on what is called tangible wealth by which has meant land buildings, inventories of stores, automobiles, things like that. The federal government does not tax those things. And state governments very, very rarely do. It is the local government that taxes, land buildings, automobiles to raise municipal revenue."

"There is no reason for that," Wolff emphasized. "It is stupid, incompetent, haphazard. It means that if you own a car in one town, you pay a different tax."

This is relevant because, although the rich would not doubt claim that an income cap would destroy their ability to live the high life, in fact "this is only taxing income, it's not taxing all forms of wealth, which would essentially be a way of saying you could still accumulate massive empires. It's just the income itself would be limited."

Gabriel Mathy, a macroeconomist at American University, shared his thoughts with Salon by email after arguing that the income cap proposed by Roosevelt would be a bit higher than my own estimate. ("Relative to income per person back then converted to now, that's worth over $1 million.")

"Figuring out how much income that would raise would require a full accounting of the wealth out there. However, the top one percent of earners is about at $400,000, so we can use that as a rough approximation: how much money could we get by taxing the top one percent over $400k?" Mathy posed to Salon.

He speculated that many of the super-rich would avoid this kind of cap by emigrating and renouncing their American citizenship, and added that it would be difficult to politically implement. "Even if many Americans do not expect to become rich, they think about the possibility of making it and wouldn't want to prevent entrepreneurs from becoming wealthy," he mused. As a result, he suggested a different approach — a wealth tax that involves the rich paying more of their income as taxes.

"Rather than a 100 percent wealth and income tax after a certain threshold, there would be a wealth and income tax at a lower rate, say two to six percent depending on the level of wealth and a 50 percent bracket for high income earners," Mathy told Salon. "This would result in a lot less capital flight, and would raise a lot more revenue. And there were a lot more studies done of the effects of higher wealth taxes (and higher income taxes) that can be consulted. It's an interesting question to think about these wealth and income caps, but we've seen inheritance taxes trending downward: if we can't even get a fair, higher rate of tax on inheritances, an institution that generates an un-American aristocracy of wealth, can we really expect to get a wealth cap?"

That said, he agreed that if a wealth cap was able to be implemented, it would "reduce the role of the wealthy in our society, and would reduce their influence in pushing destructive policies."

Thomas Ferguson, professor emeritus of political science at the University of Massachusetts Boston, had observations that echoed those of Wolff and Mathy.

"In a globalized world, I'd be very cautious about proposing an income level," Ferguson told Salon by email. "Lots of people own assets and receive income from abroad, which doesn't need to be reported here. These folks would escape; note also that foreign firms can make political contributions in the US quite legally. You can own the firm abroad and direct it in the US. More broadly the whole question of corporate contributions, which don't appear as any individual's income unless the companies distribute it, needs to be addressed."

He suggested two remedies that could address those weaknesses: "I am sure what is needed is tight regulation of offshore accounts. I also think public funding of candidates, as I've long argued, will help a lot, even if you can't regulate all political money."

Norman Solomon, national director of RootsAction.org and a Sanders delegate from California to the 2020 Democratic National Convention, expressed admiration for Roosevelt's idea to Salon, noting that it was more radical than anything proposed by the Sanders campaign.

"It's fascinating to me that in the usual vernacular of politics and mass media, the word redistribution has been trashed and it's seen as like a third rail," Solomon explained. "I think even a lot of liberals have argued that. No, we're not trying to redistribute the wealth. I certainly agree, but I think there's a throughline here beginning with the success of the DLC [the centrist Democratic nonprofit known as the Democratic Leadership Council] and the emergence of the Bill Clinton-style of Democratic Party so-called 'leadership.'"

One of the most common criticisms of income cap proposals is that they would remove incentives for people to work hard or be innovative. Wolff strongly disagreed with that argument.

"The notion that you can only incentivize a person by means of money, and that it's either the most important or the ultimate [motivator], that is a really psychological infantilized kind of thinking. It's just silly," Wolff explained. To illustrate his point, he laid out a hypothetical scenario.

"Suppose a person who made an unusual achievement by working very hard was given an extraordinary set of honors in the community, a day would be set aside to honor what this person had done, and it would be explained to the coworkers or to those in the larger community of which this person was a part," Wolff said. "A gift that had been paid for by a tiny portion of public taxes would be given to this person, a type to enable them to have a nice vacation or to build an extension on their house. Something nice and reasonable that showed the appreciation of a community for something that a person had done." As he argued, the psychological incentive to work hard for that reason — or simply out of the innate human instinct for pride in one's work, especially when those achievements are widely recognized by others — is powerful.

"There's absolutely no reason to believe that you would get one iota less of a motivated response from people from that reward, as opposed to giving them $175 billion as the reward that Jeffrey Bezos gets for being a glorified delivery boy," Wolff told Salon.