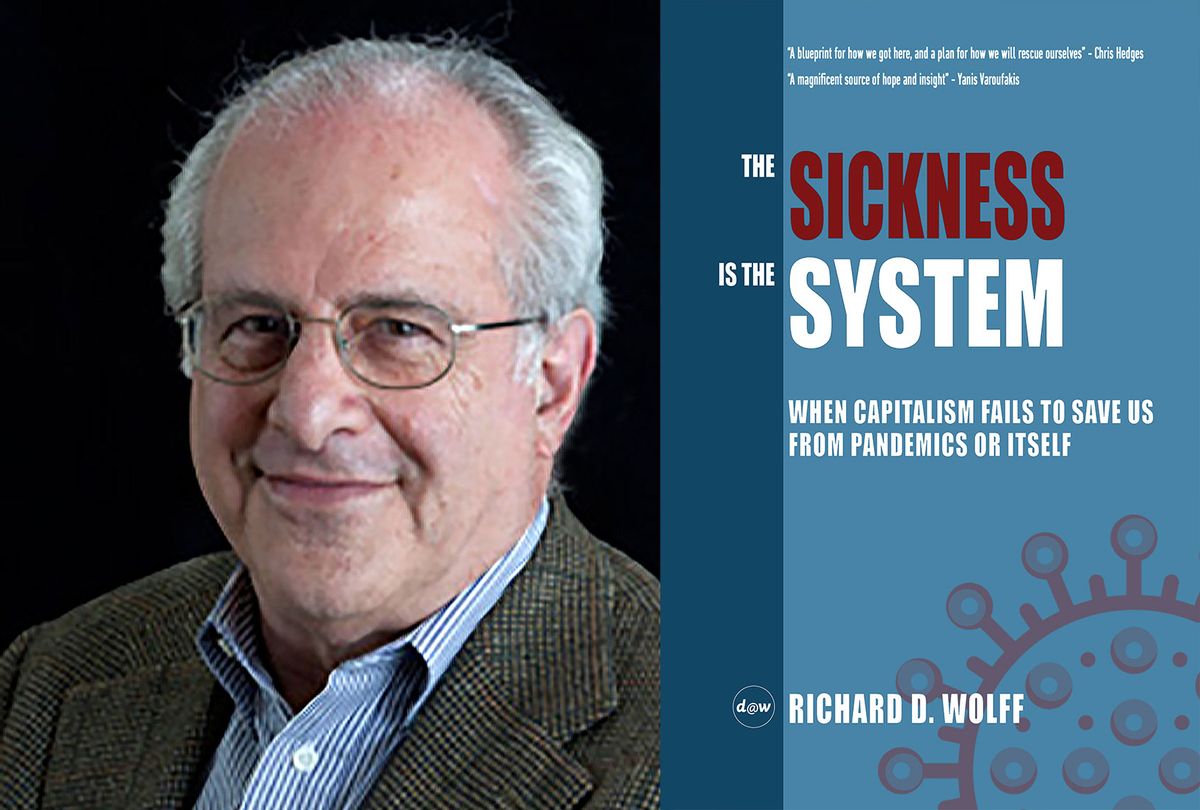 As I've written before, the novel coronavirus pandemic has exposed many of the structural weaknesses in capitalism. In order to rationalize the free market ideology that undergirds capitalist systems, capitalists must ignore inconvenient scientific facts (whether about the pandemic or issues like global warming and pollution) and cut corners when trying to help those stricken with misfortune. Even worse, capitalism requires constant consumption in order to maintain prosperity; if a wrench is thrown into the gears of perpetual growth, the entire economy grinds to a halt, as we have seen since the economic shutdowns began in March.

These arguments, and many others like them, are central to Dr. Richard D. Wolff's new book, "The Sickness is the System: When Capitalism Fails to Save Us from Pandemics or Itself." In a series of well-researched essays outlined with impeccable logic, the professor emeritus of economics at the University of Massachusetts Amherst analyzes the events of the last seven months — what one might deem the "COVID-19 era" — and explains how the horrors of 2020 are primarily caused by the social, political and economic status quo. His book tackles a number of issues, including how the economy crashed not because of a virus but because capitalism is incapable of coping with epidemics, how America's healthcare system is corrupt, and how income inequality caused immense suffering long before the pandemic and is propped up by economic myths.

He deconstructs how both the Democratic and Republican parties refuse to accept that capitalism is causing the problems which afflict us today, how the bipartisan stimulus package was woefully inadequate and how surging unemployment could easily be fixed if our policymakers had the will to do so. He explores the connections between capitalism and racism, sexism, the police/prison industrial complex and the dominance of mega corporations like Amazon.

Indeed, his book is so thorough, so comprehensive in its insightful analysis, that it is a practically a one-stop center for anyone who wants to understand why the year 2020 has been such a dumpster fire.

"There is a unique incapacity of the capitalist system — by which I mean, a system of private enterprises owned and operated by shareholders, families, individuals producing for a profit and the ordering about of the majority of people involved in every enterprise or the employees — that system is uniquely incapable of securing public health," Wolff told Salon. "And since public health is a basic demand, a need of human communities, this represents a profound disqualification of capitalism. And to spell it out just briefly: it is not profitable for a private, profit-driven competitive capitalist to produce masks by the millions, or gloves, or ventilators, or hospital beds, or all the rest of them."

As Wolff pointed out, the government failed to step in and fill the void being left by the private sector. This did not happen because it cannot produce what society needs even when doing so is not profitable. The problem is that the government is perfectly capable of implementing such policies — but only does so when it happens to be in the best interest of a given industry which exerts control over the state.

"A government failure cannot be excused on grounds of the government not doing such things or conceiving of such things, because that's not true," Wolff told Salon. "The government does exactly what it failed to do in the maintenance of public health. It does that for the military. It is just as unprofitable for a private capitalist to produce a missile and then store it in some warehouse and monitor it and clean it and replace it and repair it, waiting for God knows however long a time until the next war makes this missile something the government buys."

Wolff noted that companies that are part of the military-industrial complex would not manufacture vehicles, weapons and the like "unless the government comes in and says, 'We will buy it from you right off the assembly line. And then at government expense, we will store it and ship it and monitor it and clean it and all the rest.' The government does this as a matter of course for the military. And it did not do it for the public health."

The reason it failed to do this to thwart the pandemic, Wolff explained, is because sometimes you get groups of industries who join together to create a group monopoly over a service that society needs.

"That's where the health professionals came in," Wolff explained. "There are four industry groups: doctors, number one, hospitals, number two, drug and device makers, number three, and medical insurance companies, number four. Those four together operate a conjoint monopoly. They are the only way to get the health care, one or another dimension of it, that is available. They operate as a monopoly. They help each other, coordinate their political and commercial lobbying advertisements, and they have succeeded dramatically in the United States, particularly since World War II, in boosting the price of medical care far beyond what it would have been had there been genuine competition."

This has not led to better healthcare for Americans. Indeed, as Wolff explained in our interview and his book, Americans pay far more than citizens of other advanced industrial countries for health care and receive mediocre outcomes in return. We struggle with major public health problems like obesity, the opioid epidemic, high blood pressure and diabetes. Yet despite all of this, the health industry monopoly has been able to successfully fight back against all but the most modest reforms (such as the Affordable Care Act, which even now it is pushing to repeal) because it cares less about serving the public than maintaining its industry dominance.

"The medical profession, therefore, never wants the government anywhere near what they're doing, because it would threaten their monopoly," Wolff told Salon. "If the government were making regular purchases, being the intermediary — as governments are virtually everywhere else on this planet — it would draw the attention of a mass public to the problem of government money being used to sustain a profession. And then there would be no excuse anymore for the lunatic arrangement we now have. The monopoly would be attacked and it would be undermined."

Salon also asked Wolff for his thoughts on the 2020 presidential election. In his book he makes it clear that the Democrats and Republicans both subscribe to pro-capitalist ideals that are destructive to both America and the rest of the world. Like many others on the left — including the former supporters of Biden's chief opponent in the primaries, the democratic socialist Sen. Bernie Sanders of Vermont —  Wolff is clearly disappointed with Biden's center-left positions. As such, does he feel that electing Biden defeating Trump will help America?

"I don't think it makes a major difference in dealing with the underlying problems, but it does make a significant difference in dealing with a whole set of other less foundational or less fundamental or less deeply rooted problems," Wolff told Salon. "And so it's crystal clear for me that, just for me personally, choosing Mr. Biden over Mr. Trump is a no brainer. And so I have no problem with people who make that choice. I would maintain that what I hear and see from Mr. Biden falls way short of coping with the kinds of issues that I try to raise in that book and in the work that I do generally."

He added, "I regret that. I think it's a mistake on his part even within the framework of his objectives."