Bernie Sanders' inner circle is pushing Joe Biden to the left. Or, at least, they're trying to 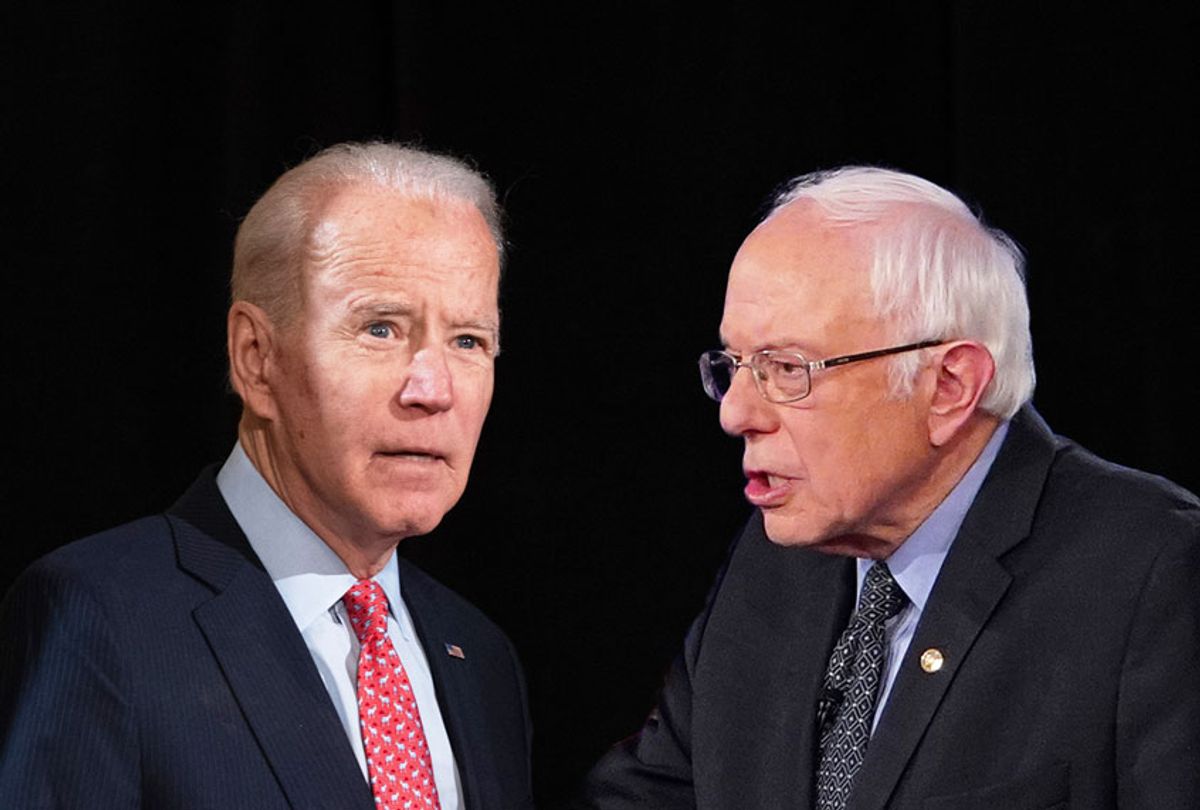 Earlier this month, former Vice President Joe Biden's campaign released a 110-page document containing policy recommendations that the presumptive Democratic presidential candidate will be expected to advocate in his platform and (in theory) follow if elected in November.

The conditions which led to the development of this platform are quite consequential. After Biden defeated Vermont Sen. Bernie Sanders for the nomination, Sanders' staff and supporters argued that they could not support Biden merely because he was the only viable alternative to President Donald Trump. Former Sanders staffers joined the Biden campaign with explicit hopes that Biden would incorporate some of Sanders' progressive platform into his own. That was the mentality they brought with them when six policy task forces — on the economy, health care, education, immigration, climate change and criminal justice reform — were formed in May to make policy proposals to the Democratic National Convention's Platform Committee.

The task forces came away with a number of concrete policy suggestions, although they are not nearly as progressive as the Sanders campaign had hoped. And that fact is alarming some of Sanders' progressive staffers and supporters, who have been publicly pushing the former vice president to be less of a centrist.

Indeed, flipping through Biden's policy recommendations, there is nothing about Medicare for All — an extremely politically popular policy proposal in its own right — nor eliminating Immigration and Customs Enforcement, legalizing marijuana or passing a Green New Deal.

As a recent New York Times article observed, Biden's top staffers continue to be center-leftists of the type who were conspicuous during President Barack Obama's administration. Many progressives want more than a third Obama term, but with Biden surrounding himself by advisers like Rahm Emanuel (Obama's former chief of staff and a corrupt, neoliberal Chicago mayor) and Lawrence Summers (a former Obama economic adviser and universally disliked Harvard University president), it is hard to shake the sense that that's what we're going to get.

So how are progressives supposed to feel about Biden — and, more specifically, the policies that he has (and has not) committed himself to? Sen. Sanders' supporters, both politicians and staffers, spoke to Salon about their priorities and attempts to shape the policies of the presumptive Democratic nominee.

"The highest priority is universal healthcare and Medicare for All, because there is a health care crisis," Rep. Ro Khanna, D-Calif., a former co-chair of Sanders' presidential campaign, told Salon. "Many millions of Americans now understand the pain of being dependent on employer-based healthcare, given that they've lost their jobs, and this is the time we need to have to make sure everyone is covered under Medicare and that we provide everyone with healthcare. So that has been our biggest push."

He added, "The second portion has been on military budgets. I mean, we are spending $140 billion more than when Obama left. We ought to have at least a ten percent cut . . . we [should] channel that money into building our manufacturing base and investing in clean tech jobs and supporting broadband."

While Khanna admitted that Biden's platform did not go as far as Sanders supporters wanted when it came to issues like Medicare for All, he expressed satisfaction with what had been accomplished on that issue and confident that Biden was persuadable to move farther to the left in the future.

Ohio State Sen. Nina Turner, a Democrat who was a national co-chair of Sanders' 2020 campaign, was not as satisfied with the task forces' policy results. When asked by Salon to rank her assessment on a scale from zero to 100, she said "60" on a superficial level and "one" on a substance level.

"Medicare for All is non negotiable," Turner explained. "People are dying, losing their livelihoods. If the pandemic doesn't wake this party up to the need for universal health care. I don't know what will."

Turner also expressed dismay at what she characterized as the Biden campaign's unwillingness to move in a progressive direction on issues like legalizing marijuana, the Green New Deal and "wholesale police reform."

"Symbolically they got close, and let us not forget that these are recommendations — while people are getting all giddy over it, it's just recommendations," Turner explained. "It will be incumbent on the Biden campaign, even in the places where progressives feel as though they have a victory, to ask the question: 'will this stuff be implemented?'"

Turner felt it was ominous that the Biden campaign was reluctant to even embrace Medicare for All. "Even in the symbolism, they couldn't go as far as say[ing] that healthcare is a human right, and back that up with some substance. He is just talking."

Rep. Pramila Jayapal, D-Wash. — who was one of the task force groups' co-chairs — had a more optimistic take on the task forces' results than Turner.

"I think we made enormous strides," Jayapal told Salon. "I think that we can legitimately say that this platform is the most progressive platform we've had for a long time on health care."

Jayapal noted how the Biden campaign spoke of expanding the public option, making sure that it will be administered by Medicare and not by commercial private insurers, and pushing to eliminate waiting lists for people needing long-term care.

"I think we can legitimately say, because of our negotiations, that no American will pay more for prescription drugs than any other country," Jayapal told Salon. "There are a lot of things we were able to get. And I think that I believe that we pushed him significantly to the left, but we're not done. I haven't changed my view on Medicare for All. In fact, every article I see, I just think makes the case for why we need to have a single payer universal healthcare system, and I'm going to keep pushing for that."

Journalist Norman Solomon, national director of RootsAction.org and a Sanders delegate from California to the 2020 Democratic National Convention, praised the Biden campaign for its movement on climate change.

"Insanity is rare among individuals, but very common among groups and nations and societies," Solomon explained. "And that's certainly true where it would be an understatement to say that the United States and the world and human beings are destroying our nest. It's a form of insanity for fossil fuels to be used the way they are, for health care to be often withheld from people the way it is, etc."

He added, "When you look at the progression in the last few months, there's been a bit of at least verbal movement from Biden in a progressive direction."

Solomon made it clear that, while he is not happy with all of the positions taken by the Biden campaign, he feels progressives who are considering not supporting Biden for ideological reasons are being selfish.

"Is this about you or is it about the country and the world?" Solomon asked. "If it's about you, then nurture your narcissism about your own conscience."