Rahm Emanuel is a national disgrace: Why he represents every worst instinct of the Democratic Party

The Chicago mayor's ties to a shocking police cover-up get stronger by the day. This should come as no surprise 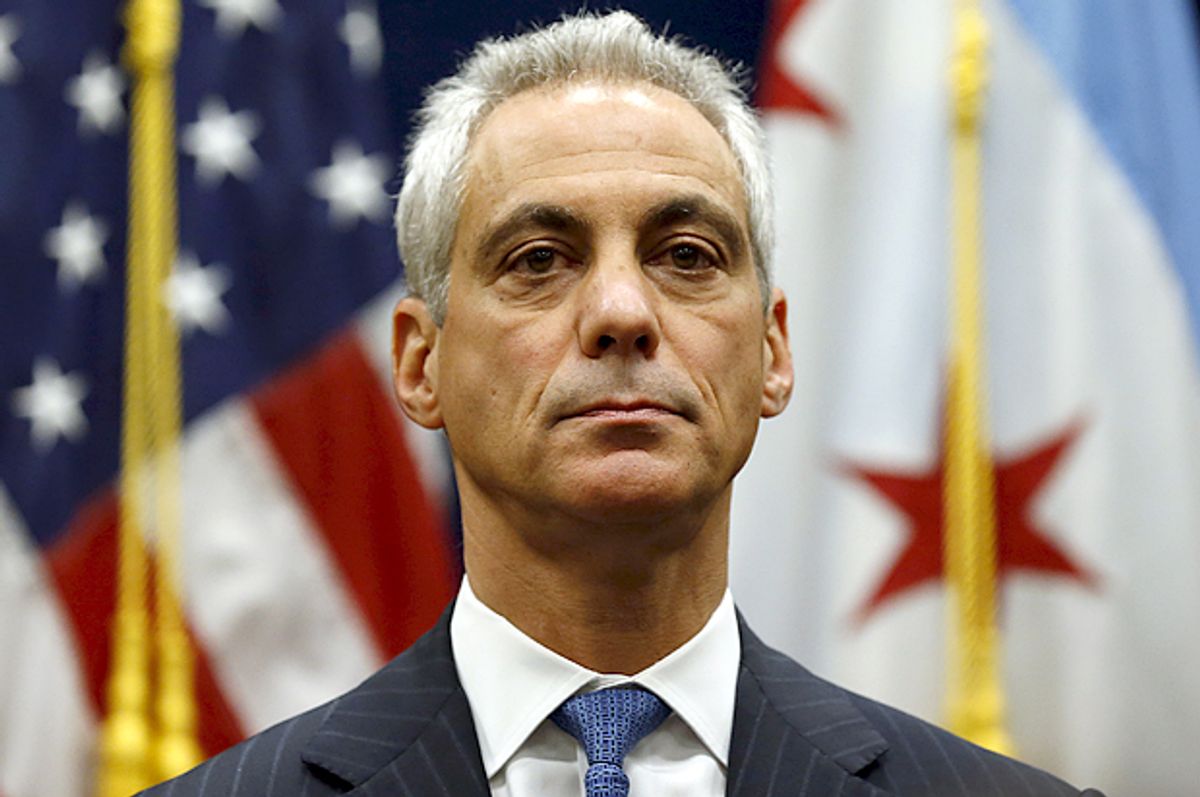 The scandal surrounding Chicago mayor Rahm Emanuel's grossly corrupt and negligent handling of police violence in his city keeps getting worse and worse.

Ever since Chicago was forced in November to release video showing the gruesome police killing of black teenager Laquan McDonald, Emanuel has been on a quest to save himself from being driven out of office. He has publicly shed tears over McDonald's death and announced a raft of new measures intended to show that the Chicago Police Department is reforming itself.

Yet events, many of them of that same police department's own making, continue to disrupt Emanuel's plans to evade responsibility.

Emanuel's proposed reforms actually came after yet another police scandal. As 2015 drew to a close, he decamped to Cuba, hoping for some rest and relaxation. He was forced to cut that vacation short when police killed two innocent black people—Quintonio LeGrier, a 19-year-old college student with a history of emotional instability, and his next-door neighbor, Bettie Jones, a 55-year old mother, grandmother, cancer survivor and activist. LeGrier was shot seven times. The CPD said it had "accidentally" killed Jones, and provided no more detail than that. The incident made a mockery of any notion that the department had changed since the McDonald crisis first hit. Emanuel announced his reforms—which, as Heather Digby Parton wrote at Salon, leave a great deal to be desired—some days later.

Then, earlier this week, it was announced that Chicago has paid reparations to 57 people who had been subjected to torture and abuse by the CPD in decades past—a reminder that the misdeeds of the department stretch back generations.

But it's not just external actors making Emanuel's grip on power more tenuous. There's also increasing evidence of just how deeply involved he was in the response to the McDonald scandal. Like any half-intelligent post-Nixon politician would, Emanuel has taken assiduous care to ensure that no paper trail directly links him to the city's 13-month effort to suppress the footage showing McDonald being slaughtered in the street. But a series of document dumps has shown that virtually everyone around him was focused on the issue, with an eye on Emanuel's re-election campaign in early 2015.

We now know, thanks to emails obtained by The Daily Beast, that lawyers met with Emanuel just weeks before the election and discussed the video with him. They then insisted to the McDonald family that the terms of any settlement agreement over his killing include a provision that the video be kept from public view. (The lawyers were successful, and the settlement was approved by the City Council in a 36-second vote.) We also know from reporting done by the Associated Press that the mayor's advisers were openly worrying about the potential fallout from the video as early as December of 2014—and that the supposedly independent body that monitors the police in Chicago was closely coordinating its response to the video with Emanuel's staff.

It beggars belief that Emanuel—a man whose hard-charging, domineering, micro-managing tendencies are the stuff of legend—would have merely left the details of such a potentially explosive issue to his staff without some personal directive. That would have required a personality transplant. Clearly, Emanuel was involved.

It's equally clear that Emanuel does not deserve to run Chicago for even a second longer. He exemplifies a particularly loathsome breed of Democratic politician—the constantly triangulating, plutocrat-courting, privatizing so-called "centrist," that so dominated the Bill Clinton years. Emanuel deserves to be buried—along with that tradition—so that someone with a modicum of integrity can take the reins.

Moreover, it's long past time for President Obama—and the people running to replace him—to weigh in meaningfully on the Emanuel scandal. Carly Fiorina is rarely correct, but she spoke the truth on Wednesday when she said this:

People need to demand that Obama break that silence, and that the disgraceful things happening in Chicago rise to the top of the 2016 campaign agenda.